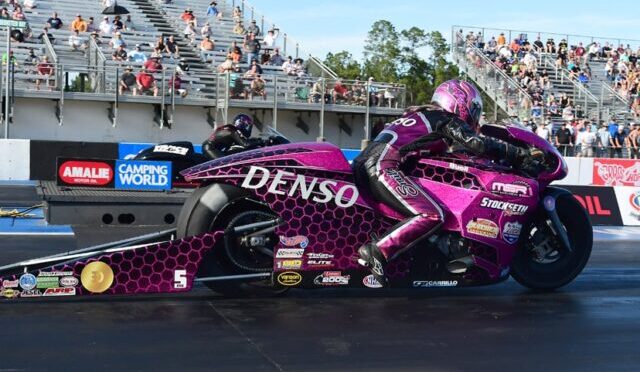 Matt Smith Racing had a great 2020 season. Not only did team leader Matt Smith earn his fourth NHRA Camping World Drag Racing Series Pro Stock Motorcycle championship, but one of his teammates, wife Angie Smith earned her second PSM Wally winner’s trophy and joined the 200mph club, while Scotty Pollacheck hit 200 and earned his first-class victory at the most sacred race of all: the U.S. Nationals.

The goal of 2021 is to get another championship for the team and to get John Hall, now the fourth member of the MSR riding squad, into the 200mph club. And Matt Smith wants to see all four of the teammates in the winner’s circle this season. “We know we can win the championship over here. That’s the main goal because that’s how you get and keep your sponsors.

As he’s increased the exposure of MSR beyond fielding EBR motorcycles for himself and Angie, Matt Smith has taken on some great riders. Pollacheck, for instance, has shown gobs of talent but until he hooked up with MSR, never attained a spot in the Winners Circle. Hall should be next up on the hit parade. 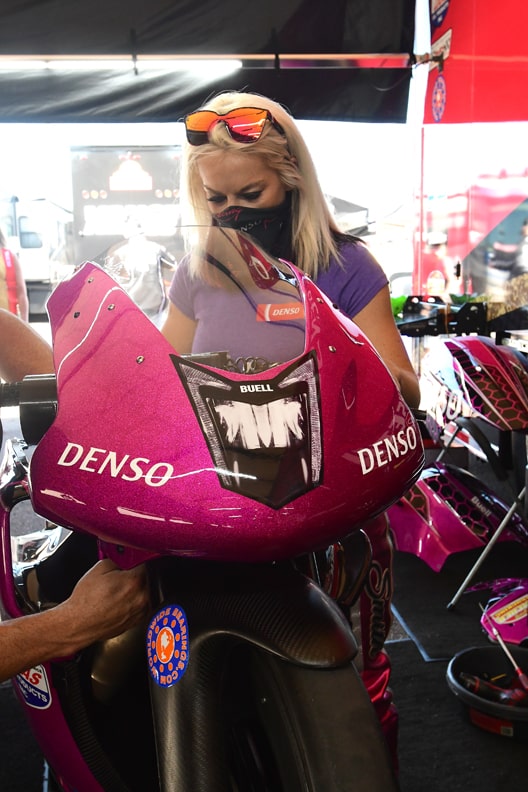 And then there’s Angie, who had been on Matt Smith’s radar long before they became teammates, much less husband and wife. He’d watched her run some bikes “and I liked what I saw. For one,” Matt Smith noted, “she was marketable. I wanted to have a female on my team; she did a good job so we brought her on.” Angie did a single race with MSR in 2007; she became a full-time member of the team in 2008.

Angie Smith has turned out to be more than a two-time national event winner in Pro Stock Motorcycle. She’s hurdled the 200mph speed limit twice in the past year and is always in the hunt any given weekend. Much of that is due to her husband’s tuning of her hot-pink DENSO EBR; the balance is due to the fact that it’s Angie who assembles the top end of all engines produced in the North Carolina shop.

“I taught her how to assemble motors and it took a lot of pressure off me in the shop,” he said. One of the few things Angie isn’t capable of doing is moving the EBR engines from a bench to a bike, since they weigh around 220 pounds. “I’m a very, very independent woman,” Angie said, “and not being able to do that myself is, well, frustrating, but I do have to ask for help.”

While Matt Smith is the one who builds up the crank and rods, it’s up to Angie to perform top-end build-up on their engines. “Over time he’s taught me what I know and 10-12 years later I’m building engines at the shop and doing maintenance on them,” she said. “Learning these fundamentals has made me a better rider. I can tell Matt what the motorcycle’s doing and some riders lack that. I can give better feedback to help my crew chief.

“We have a system: he puts the bottom end together and I do the rest. I put the heads on, I do all the valve train and we’ve developed this system that works. It’s really, really helped me a lot when it comes to racing the motorcycle.” She also looks at the plugs on all four bikes between rounds of qualifying and racing. “They’re integral to the engine. How they’re put in is critical and you have to be very careful. You have to take care of your plugs.”

That she – and now Matt – are sponsored by spark-plug purveyor DENSO is part of the system. “Their involvement in motorsports is very big. DENSO is highly involved – not just a sponsor that sends a check – they’re a lot more than that. They want feedback on their products and want to know how to make them better. When you have a sponsor who’s that involved,” Angie noted, “you will excel.” 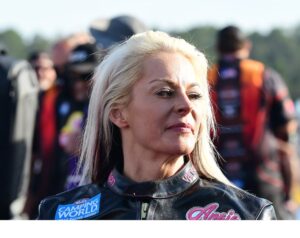 Angie Smith learned her riding skills at George Bryce’s school, where she licensed in NHRA Pro Stock Motorcycle, and she rode for him a bit. Now, 41 and one of the most colorful riders in NHRA’s very rich female contingent – at Gainesville there were five female riders and only one, Jianna Salinas, didn’t make Sunday’s eliminations – Angie qualified 10th, yet fell to the first rider to hit 200mph in the first round, Hector Arana III.

At that first race of the season, Angelle Sampey took her four-valve Vance and Hines Suzuki to No. 1 and earned her first 200mph lap of the quarter-mile, yet both she and Karen Stoffer were gone by the quarterfinals. The finals at Gainesville fell Matt Smith’s way – with yet another 200mph run – as he defeated Ryan Oehler. “We don’t keep up with Matt’s 200mph runs anymore; we don’t even count them,” Angie laughed.

“We like to let our work do the talking. Everybody out there knows we’ve got good horsepower; we just need to get it down the track,” she stated. Riding a new chassis in 2021, Angie Smith is ready to win more races and ready for her MSR team to win more races. “We’ve been successful in testing and our 60-foot times have been good. This year, being able to 60-foot well should make us even more successful.”

Not everyone knows that Angie Smith is responsible for building some of the fastest and quickest motorcycles in the NHRA Camping World paddock. “I know how the bike works,” she said. That should definitely make her competitors worried.