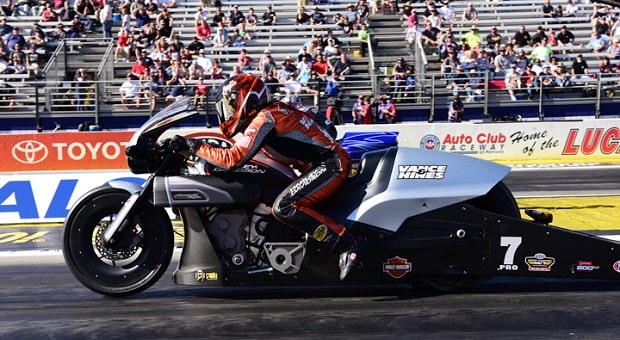 At first it was going to be a part-time gig for Sampey, who had been riding with Cory Reed’s team for a couple of seasons. After just a couple of races, she was installed as a third full-time rider for the Brownsburg, Ind.-based H-D factory team. There was a period of adjustment for Sampey as she got used to the V-twin, its substantial power and different harmonics.

As the season went forward, she began to jell with the team and with her motorcycle, especially as the body style changed to complement the consumer FXDR motorcycle offered by Harley-Davidson. The new bike was introduced for racing at the Dodge Mile High NHRA Nationals outside Denver, traditionally one of the most difficult events of the year for all NHRA racers.

Sampey qualified in the top half but lost to Scott Pollacheck’s EBR on a hole shot. Teammate Andrew Hines, now a six-time Pro Stock Motorcycle champion, would win that race and the next contest in Sonoma a week later. Sampey’s lack of experience with the new Harley-Davidson showed in her second-round Sonoma exit.

Things started to turn around at the Chevrolet Performance U.S. Nationals when Sampey earned her 50th career No. 1 qualifying spot. Unfortunately she red-lit to ruin that momentum, but it did carry her to Reading where she again took No. 1, falling to then-reigning champ Matt Smith (EBR) in the second round. Sampey again red-lit in St. Louis, didn’t take it past the first round at Charlotte, fell to teammate Eddie Krawiec in the Dallas semifinals and was gone in Las Vegas after a second-round match-up against Steve Johnson’s Suzuki. In the Pomona finals, she lost a second-round race to Karen Stoffer.

Still, Sampey’s contributions to the Harley-Davidson team convicted them that, despite her declaration that the motorcycle intimidated her at the start of the year, she is the right rider to continue with the FXDR-mounted squad into the 2020 15-race season.

“Angelle was a bit of an unknown for us, which is why we initially started with four races. We quickly realized how much value she brings to our team, which is why we added her for a full season,” said team co-owner Terry Vance.

Angelle Sampey is, after all, a 42-race winner and did qualify for the 10-rider Countdown to the Championship playoffs, finishing seventh once the playoffs were complete. She made the announcement of her Screamin’ Eagle return during Pomona pre-race ceremonies.

“I am so relieved and so happy,” Sampey said, “to be riding a Harley-Davidson FXDR again next year. I will have the desire to compete and still believe I’ve got some wins left in me. This season was tough; it was a learning experience because these [bikes] are a lot different than what I’m used to, but I feel like I’ve made a lot of progress.”

Vance emphasized that Sampey’s attitude as much as her riding is why she’ll be back with a team against which she battled mightily during her three championship seasons.

“I can say,” Vance stated, “that Harley-Davidson loves her. They love her attitude and the obvious passion she has, and her dedication to be the best she can be. Personally, I’m so happy with her I can’t tell you. She’s great for the sport and great for Harley-Davidson and Vance & Hines. I think,” he concluded, “next year, we’ll be able go win some rounds and win some races.”