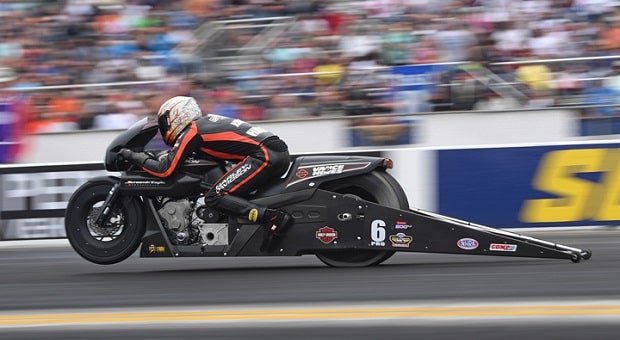 Is this the year that Andrew Hines earns his sixth NHRA Pro Stock Motorcycle championship? If he keeps riding his Vance & Hines Harley-Davidson Street Rod through to the end of the season as he’s performed thus far this year, it’s a foregone conclusion that this second generation rider will take another big Wally trophy, a black-and-yellow Mello Yello leather jacket and ride off into the sunset.

The racing in Pro Stock Motorcycle has been fairly even over the past few years, with riders on both EBR (Buell) and Suzuki motorcycles challenging the Harley-Davidson duo of Hines and four-time champ Eddie Krawiec. They had to challenge, because the H-D motorcycle simply wasn’t available for anyone else to ride. That’s changed, albeit just a bit, as Vance & Hines added a third H-D bike for three-time champion Angelle Sampey.

Even the vaunted path to 200mph, one that dangled in front of the PSM crowd for years, wasn’t initially earned by an H-D bike. Last year, the first rider to join the DENSOAutoParts 200-mph club was Hector Arana Jr., riding an EBR prepped by his family enterprise at Gainesville, the first race of the year. He received a check for $10,000 for being the first to crack that barrier.

Eddie Krawiec finally made it to the 200-mph club in mid-season in Sonoma, and 2018 champion Matt Smith, also on an EBR, ran several bursts in the quarter-mile at 200-plus as he earned his third championship. Smith also broke the national record this year in Gainesville, leaving a single spot available (and a third $2,500 check) in the four-rider club. No Suzuki rider has gotten close, even with a weight penalty applied to both EBR and H-D riders earlier this season. 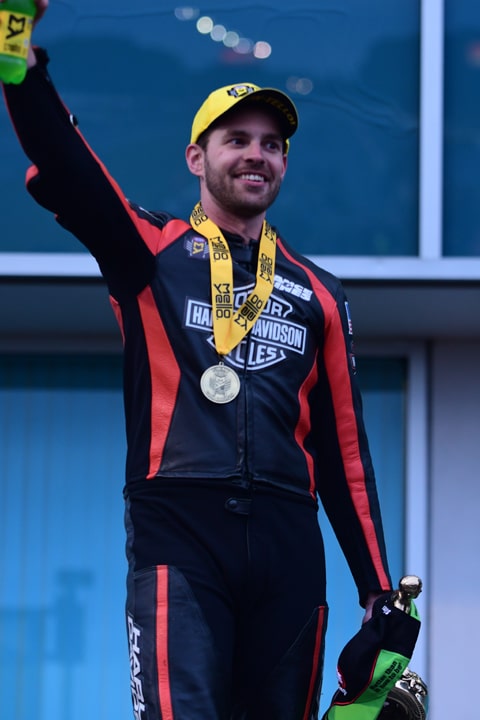 So, will Andrew Hines be the next to 200? He’s flirted with the speed but hasn’t hit it yet. Second-year rider Ryan Oehler has also come close, but no cigar. After Hines earned Harley-Davidson’s 100th professional NHRA victory at Atlanta last weekend after also earning their first at Gainesville in 2004, racing against Jerry Savoie in the finals and putting down a 60-foot time of 1.054-sec that had many just shaking their heads, Hines earned his third win of the four-race season to date in Atlanta for his 51st PSM victory. He’s in the zone.

Hines, along with brother Matt, does a lot of the engineering work on the three H-D motorcycles built at Vance & Hines’ Brownsburg shop; whatever he’s doing between races is definitely helping.

“My motorcycle,” Hines said after earning his third Atlanta victory, “is nothing like I’ve ever had in my career. It’s working really well and doesn’t do much wrong. To get 100 wins for Harley-Davidson, it’s monumental. It was a very big struggle at first, and there’s been trials and tribulations, but it’s really nice to get the 100th.”