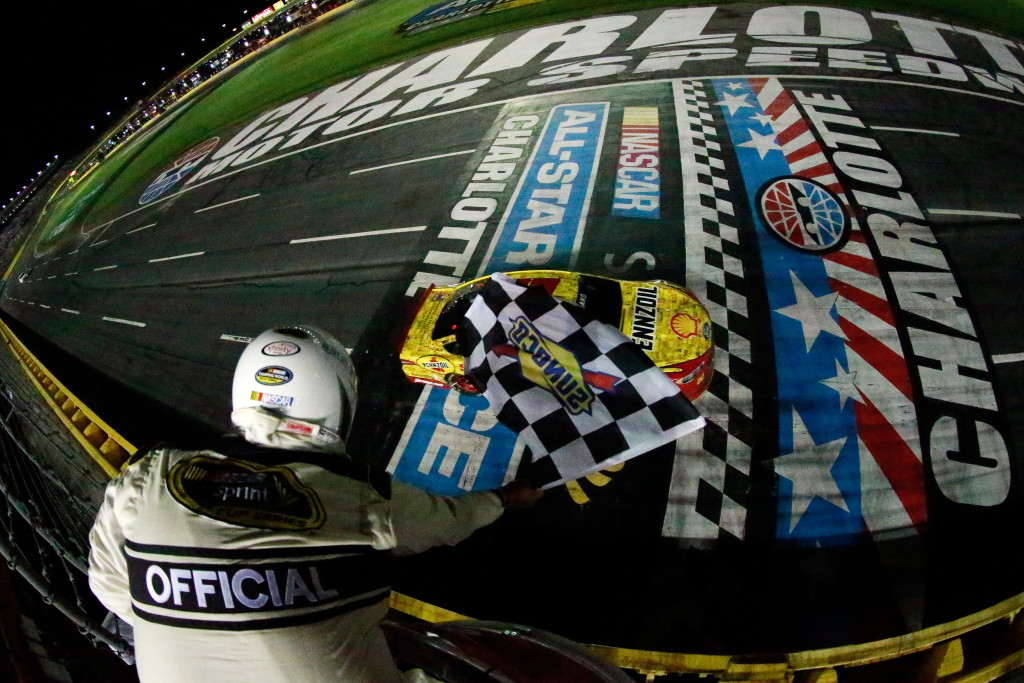 With a million dollars up for the taking under a Carolina full moon, the first question everyone was asking in Saturday night’s NASCAR Sprint All-Star race at the Charlotte Motor Speedway was ‘What’s going on in the race?’.

Teams only had a brief practice session for the race and, despite the deluge of rain that delayed the start of the celebrated All-Star race, the inclement weather finally moved out with clear skies prevailing at sundown.  The green flag waved at 10:11 p.m., but a dark cloud of suspicion quickly surfaced after the first 50-lap segment and still hovered around about how it would affect the outcome directly.

The turning point of the race happened right at the end of the first portion when then leader, Matt Kenseth, failed to pit under the green conditions because of Jamie McMurray’s spin with four laps to go, catching six other cars a lap down.  Then his Joe Gibbs Racing team was penalized by NASCAR officials a lap for not pitting in the first 50-lap segment.  There wasn’t a provision to correct the unexpected lapped cars if such a mishap of the rules occurred.

What brought on the head scratching was clarification of those rules.  As a result, Martin Truex, Jr., Tony Stewart, Jamie McMurray, Chase Elliott, Dale Earnhardt, Jr., Danica Patrick including Kenseth in 20th were all a down a lap.

Now brought about the question, where should those lap cars line up on the restart?  Some of those cars were ahead of the leader and they can’t take the wave around because they pitted instead of staying out to get back on the lead lap.  It was the rule.  All teams had to pit under green during the first break for at least two tires.  That was confusing to say the least for the teams, the fans and the FOX TV audience with some of the cars lined up in the right place but just not on the lead lap. 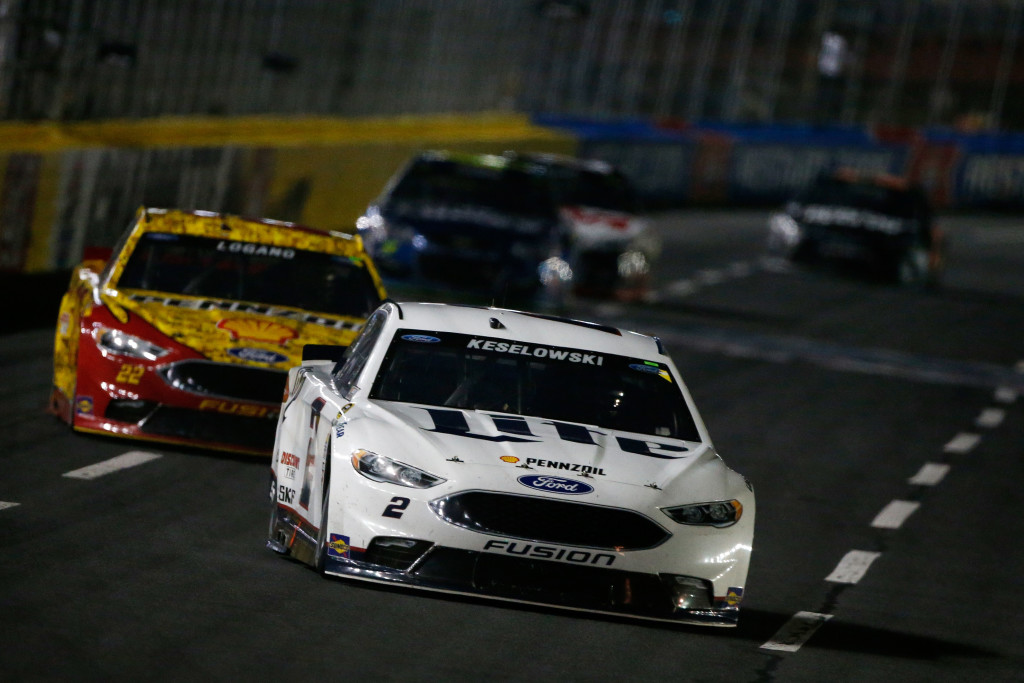 Drivers were just as baffled.  Now everyone fully understood about a green flag pit stop with the pits closing with three laps from the finish of that sector.  It was just when the caution came out with four to go; Kenseth had to accept his punishment for not pitting.  Crew chiefs interpreted the rules as though a red flag would come out and the No. 20 would get a chance to pit within the guidelines.  Everyone found out quickly, the rules are the Sprint All-Star rules with NASCAR finding themselves in scenarios even they probably weren’t expecting.

In the end, Joey Logano snared the $1 Million prize from Sprint by saving his equipment for the end with Brad Keselowski right behind him, making it an all-Team Penske win on Saturday night.

“There was a point I came over the radio where I said, I don’t really want to know what’s going on, let me drive the car and you call the race because I was confused,” said first time All-Star victor, Logano.  “All I know is if there’s a car in front of me, I probably should pass him, and that’s kind of where my head was.  It doesn’t have to be as complicated as you think it is.  Sometimes the simple life is a little easier inside the race car.  I had my hands full with enough things, so I was able to focus in on my job; Todd was able to focus in on his job.

“But obviously the whole falling back and trying to position yourself in the front didn’t really play out because there were only two, three cars that were on old tires in front of you.  We got through them in the first corner, and then it was like, all right, it’s Larson and I for this thing.  I felt confident that we had a very good shot at racing for the win when we were restarting there at the end.”

The field inverted the first 11 positions after honorary pace car driver, Carolina Panthers tight end, Greg Olsen selected the number, seeing drivers like Jimmie Johnson and Kyle Busch fading to the back to end up front on the 13-lap shootout.

It didn’t take long for the teams with fresh tires head to the front, appearing that Kyle Larson was going to be the big surprise winner.  He had already battled with Chase Elliott earlier in the day in a fender-locking, tire smoking brawl to win the Sprint Open.  Larson was in familiar territory, preferring the high groove going into turn one with two laps to go in an attempt to side draft against Logano when suddenly his Chevy slipped up, careening off the wall and sending Larson to the sidelines in another hard luck loss after driving the wheels off his No. 42 to get himself that far.

“I was able to get to the front pretty quick there and be in the best position for that last restart,” Larson said.  “I got clear right away and thought I could cruise, but I got looser throughout the race—we were making adjustments, but I guess we weren’t making big enough ones.

“I just got loose, and Joey caught me, and he did a really good job of side-drafting me.  I tried to hang on his quarter, and I just got really loose as soon as I got down in the corner.  We were going so fast I couldn’t correct it and drilled the wall.” 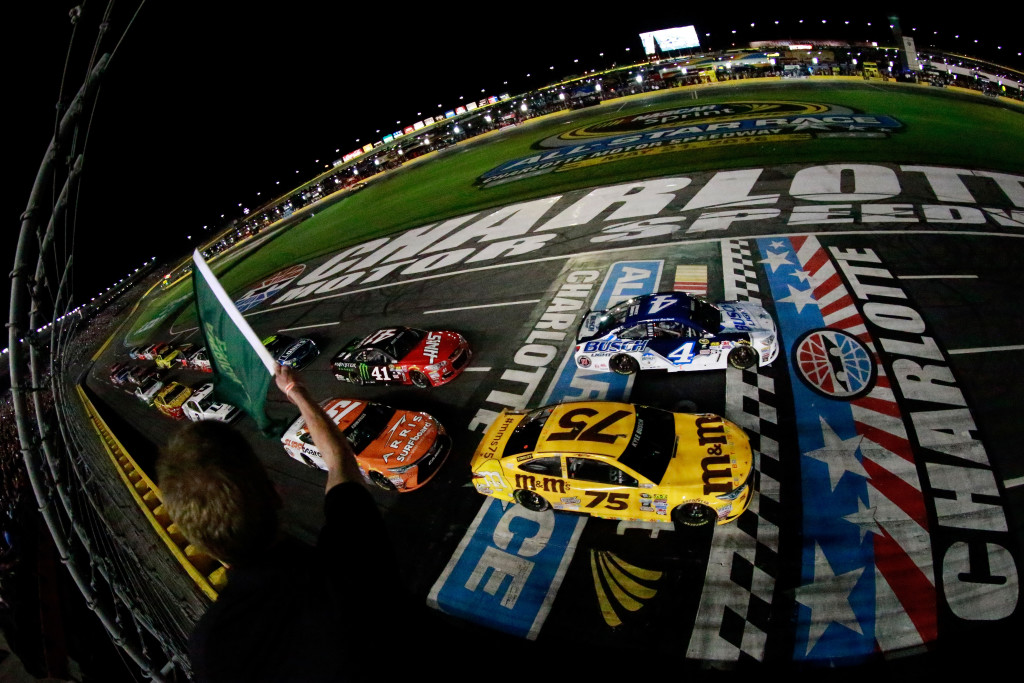 After Larson, who finished 16th, was ambling around with his crippled racer, it allowed Keselowski to get back around for second followed by Dale Earnhardt, Jr., Carl Edwards, and in fifth, Kurt Busch.

Keselowski inspired the All-Star format, lending his knowledge to the process and was relatively happy with the outcome with the desire results.

“I mean, there was a last — or next to last lap pass for the lead,” said Keselowski.  There were several passes for the lead.  The last four races, there hasn’t been a pass for the lead in the last 20 or 30 laps.  I think our fans deserve a better format than that, and they got that today.  I don’t know how you can get much more compelling racing than what we saw today, so they need to get unconfused and enjoy the racing.”

Dale Jr. stayed out of trouble and despite all the disarray with the rules was happy to be in third at the end.

“I was pretty confused right up until it was 13 laps to go, and then I knew, well, we’re racing from here to the end, and this is all the normal rules,” said Earnhardt.  “But everything before that was really out of my element.

“But NASCAR did a good job making sure — even though all the pitting was confusing and how the lap cars were pitting with the leaders, people weren’t really where they were supposed to be.  NASCAR did make sure all the lineups were correct before we went back to green.  So you can’t really complain about that too much.  It was just an unorthodox way of doing it.  I don’t know.  I think they ran into some scenarios tonight that they didn’t really anticipate and were caught off guard.  I think the 20 obviously not pitting threw them for a loop and everybody was confused from that minute on.”