As in its storied, racing lineage, the 2017 Ford GT is another show-stopper. Debuting to “oohs” and “aahs” at the 2015 North American International Auto Show in Detroit, the GT’s slippery, purposeful curves are certainly worthy of celebration. But as in a race, its the timing of when this beauty bowed that has us truly excited.

2016 marks the 50th anniversary of the Ford GT40 winning Le Mans in 1966, and is especially noteworthy because the GT40 was the first American-built car to have won France’s 24 Hours of Le Mans overall, as well as the first to win any major European race since Duesenberg in the 1920s (facts which Ferrari, Ford, America and Europe have never forgotten.)

It’s hard to imagine now, but at one time Ford could have owned Ferrari. In fact, they were a mere signature away. In 1963, Ford Motor Company got wind of Enzo Ferrari’s interest in selling. Then-CEO Henry Ford II spent millions auditing and evaluating the Maranello production facility, but in 1965, late into negotiations, Enzo refused to sell after being denied full control of the Ferrari racing program. Ferrari wanted to race in the Indy 500, but Ford wanted to run its race engine, and didn’t want to compete with a subsidy of itself. Ferrari pulled the plug and Ford was furious, and determined to beat Ferrari. With a racing team helmed by racing legend (and Le Mans winner) Carroll Shelby, Henry Ford II’s vengeful billion dollar endeavor into the GT40 garnered four overall wins in Le Mans from 1966-69—with the 1966 win in a 1-2-3 finish. 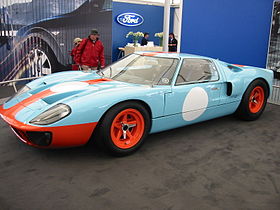 Fast-forward to 2004, and newly-minted CEO Bill Ford (great grandson of Henry Ford) wanted a halo car to signify Ford’s emergence from mediocrity in an effort to thwart forever-encroaching Japanese sales. Due to allowing the trademark rights to lapse, that halo car became the 2005 Ford GT. A modern interpretation of the GT40, the Ford GT offered the storied performance and retro cues with even more style and with some of the creature comforts with which contemporary customers had been accustomed. While Alan Mulally is rightfully credited with saving Ford today, it was Bill Ford’s passion for the company’s glory days that laid that foundation. Sales of the Ford GT went through the roof, and, though cheaper than a Ferrari of the time at $125,000, were still a pretty penny even before the dealer markup. Today, these GTs retail for double the initial MSRP. 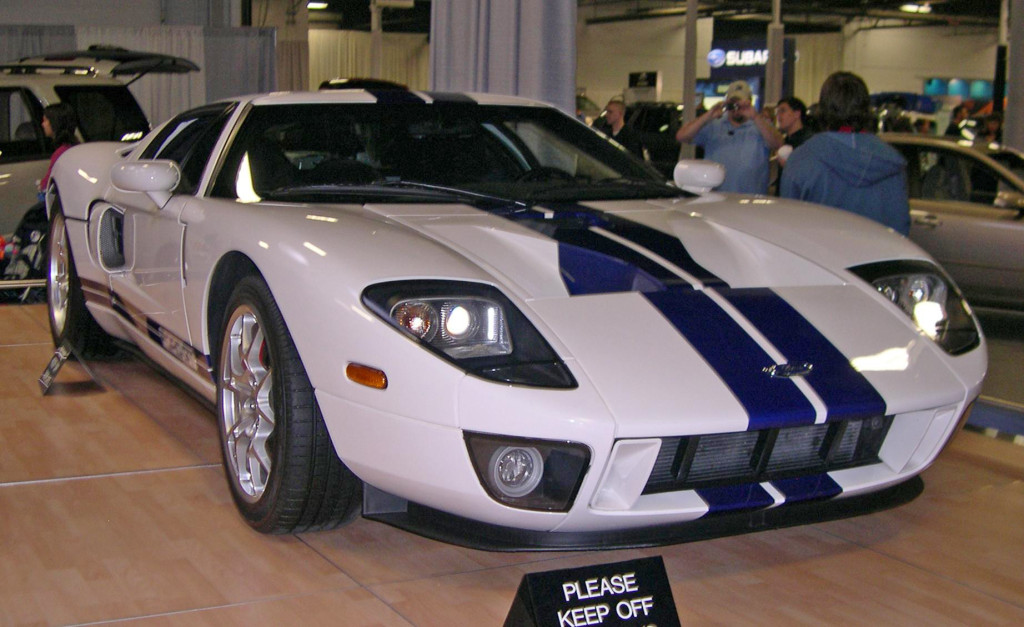 Ford must have taken notice of the climbing resale value, as Ford GT designer Moray Callum claims it’s the fastest design he’s ever done: merely 14 months from start to finish. While rumors of the GT’s resurrection have been rumbling for roughly the same amount of time, the wait is now over, and the 2017 GT is a stunning re-interpretation of both the ’05 GT and the original GT40 in all its iterations. While the federal mandate for more fuel-efficient cars has given Ford license to abandon the all-American venerable V-8 in favor of a V-6, fear not, red-blooded race fans; Ford promises it will be the most powerful EcoBoost production engine ever: a next-generation, twin-turbo EcoBoost V-6 churning out well-over 600 horsepower. Additionally, that power is transferred to the rear wheels via a seven-speed, dual clutch automatic delivering “near-instantaneous” gear changes.

As any racer knows, weight-savings is where performance truly lies, and what makes the new mid-engine Ford GT a supercar is lots and lots of lightweight material. Carbon fiber, is, of course, a given. However, as evidenced by their new F-150, Ford, like Ferrari, has made great strides in the advancement of the applied technologies of aluminum. In addition to an evermore commonplace carbon fiber passenger cell and body panels, the new GT will sport aluminum front and rear subframes.

The GT’s racing heritage continues underneath, with a taut chassis suspended by an active racing-style torsion bar, pushrod suspension and a F1-steering design. Tallboys will rejoice. Though the “40” in the GT40’s name is for the storied marque’s overall height, the 2017 GT’s ride height can gratefully be adjusted. For the “baller” in all of us, this GT is rollin’ on dubs—20-inch carbon fiber wheels to be exact (a Ford first) with custom Michelins. For those who intend to race to work in one of these, you may want to bring a change of clothes and a pair of headphones. Air conditioning and a radio are not standard. Ford’s recently-rebranded Sync 3 car connectivity system, powered by BlackBerry, is, however.

A racing heritage in a supercar that is hell-bent and performance driven. All of this, plus the timing of the new GT’s debut has everyone wondering if Ford will, indeed, return to Le Mans. When asked, Ford’s Jim Farley said while smiling, “No comment. I don’t want to make any news today.

“Too late, Jim. Here’s hoping we hear the 2017 GT at full throttle down the Mulsanne Straight.