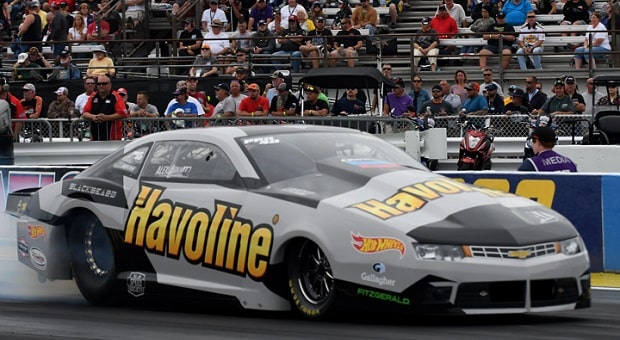 Alex Laughlin achieved his third NHRA Mello Yello Pro Stock career victory in the biggest race of the year, the 65th annual Chevrolet Performance U.S. Nationals on the Lucas Oil Raceway dragstrip over Labor Day weekend. The Texan, who started racing karts at the age of eight in his hometown of Granby, began his Pro Stock career in 2015 and earned his first career Wally winner’s trophy a year later at St. Louis.

Laughlin, who races with Elite Motorsports in both Pro Stock and in the E3 Pro Mod series, has been knocking on the Winner’s Circle door throughout NHRA’s 18-race “regular” 2019 season that concluded this past weekend outside Indianapolis. Although this season is only his second as a full-time Pro Stock racer, Laughlin has shown the skillset to succeed every time he exits the water box.

Alex Laughlin’s ascent has been aided by crew chief Brian “Lump” Self, who did some part-time driving in the past when Elite client Vincent Nobile stepped away from his car – much as team owner Richard Freeman has done this year with the abrupt exit of Rodger Brogdon, who still retained the possibility of making the Countdown to the Championship despite not racing for much of the regular season. Self brings a driver’s perspective to being a crew chief, something both Laughlin and the balance of the Elite Motorsports team can appreciate.

In fact Laughlin, who prevailed over teammate and two-time Pro Stock champion Erica Enders in the U.S. Nationals final – even as Enders cut a .007 light – became the 25th different driver to win the Pro Stock Indy finals. The victory cemented his second-place spot in the six-race Countdown to the Championship playoffs that begin at Maple Grove Raceway in Mohnton, Pa. next weekend. He’s just 20 points behind 2017 champion Bo Butner, after a points reset (he had been two points back).

Since both Laughlin and Butner drive the Chevrolet Camaro (every one of the 10 racers in the Pro Stock Countdown drives a Camaro), the difference between winning and coming up second has much to do with the driver’s capabilities and the crew chief’s abilities to read the track and anticipate what the car needs. Laughlin and Self are a great combination. Even though they’ve got a single win on the season, they’ve been at or near the finals often enough to strike fear in their competition.

Laughlin beats himself up when he doesn’t do well in racing: “Lump is so confident in himself and me and our whole team. He definitely lifts the morale so I owe a whole lot of this to him for sure,” he said after the win. They had qualified fifth and posted wins against Steve Graham, 10th seeded Countdown driver Val Smeland and 2019 winner Deric Kramer before meeting Enders in the finals. “I don’t have a whole lot of experience in the finals – I’ve been to a few of them this year – and the pressure is honestly a big deal. I choked up there to be honest.” 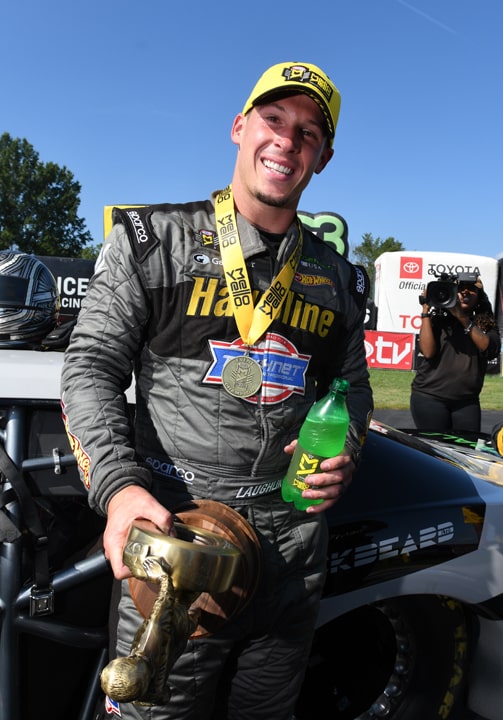 As he emerged from his Havoline-branded Camaro at the top end after securing the win against Enders, Laughlin smacked the roof of his car, then bent to kiss the ground. To say he was emotional about this win would be simplicity itself. After all, it was his first win in more than two years and Laughlin “just about choked up there, to be honest, but at the end of the day we got it done. It’s unbelievable. I’ve never even made the Countdown before and we’ve just made huge strides. It’s been a breakout season and I’m at a loss for words.”

Laughlin has more than a week to enjoy the victory, celebrate his 31st birthday on September 7th and then head for the Reading, Pa. adjacent racetrack to try and win a championship. It’s apparent he’s peaking at just the right time.

About Anne Proffit 989 Articles
Anne Proffit traces her love of racing - in particular drag racing - to her childhood days in Philadelphia, where Atco Dragway, Englishtown and Maple Grove Raceway were destinations just made for her. As a diversion, she was the first editor of IMSA’s Arrow newsletter, and now writes about and photographs sports cars, Indy cars, Formula 1, MotoGP, NASCAR, Formula Drift, Red Bull Global Rallycross - in addition to her first love of NHRA drag racing. A specialty is a particular admiration for the people that build and tune drag racing engines.