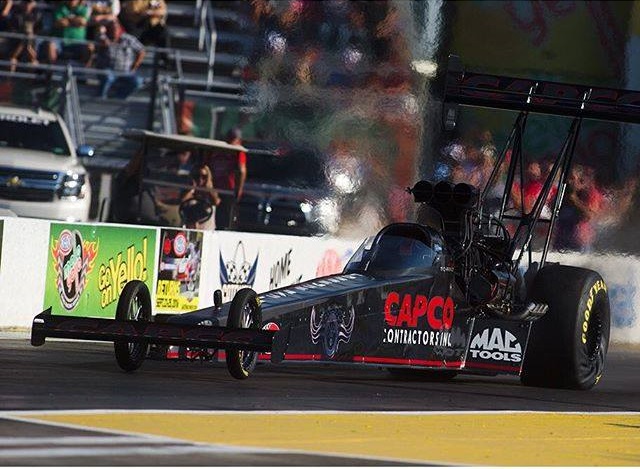 Steve Torrence Racing announced last week that it was welcoming Alan Johnson on as a consultant for the remaining five races of the 2015 NHRA Mello Yello Drag Racing Series season.

The step is part of Steve Torrence’s bid to become the first driver to win NHRA World Championships in both the Fuel and Alcohol divisions. Johnson has been hired to work with crew chief Richard Hogan on the Capco Contractors dragster beginning with last week’s 18th annual AAA Insurance Midwest Nationals at Gateway Motorsports Park.

Johnson, who has won 11 NHRA Top Fuel titles with five different drivers including Tony Schumacher, Larry Dixon and Gary Scelzi, became available after he opted to park his own race car while pursuing additional sponsorship.

“I’m looking forward to working with Richard Hogan and the team he’s assembled,” Johnson said.  “Steve Torrence Racing is a great customer of AJPE (Alan Johnson Performance Engineering), and I think we can work together to get the Capco Contractors dragster back into the winner’s circle and make a run at the Mello Yello championship.  Our arrangement only covers the last five races because Alan Johnson Racing is still actively pursuing sponsorship so we can resume operation in 2016.  For this year, though, I appreciate the confidence Billy and Steve have in AJPE and me, and I hope we can do great things in the time we have together.”

“To race against guys like Tony and Antron (Brown) and all the multi-car teams, we need all the help we can get,” Torrence said.  “Alan and Richard are good friends and have worked together before so it was a good fit for us.  Alan is probably the greatest crew chief ever.  He wasn’t going to be on the sidelines very long.  We’re fortunate we could get him in our camp. I’m excited and I know the team’s excited.”

Johnson, who won four Top Alcohol Dragster Championships with his late brother, Blaine, won 11 of the last 17 Top Fuel titles as either car owner, crew chief or both.  He won five straight titles with Schumacher (2004-2008) after winning with Scelzi in 1997, 1998 and 2000.  He won the 2010 Top Fuel title with Dixon, the 2011 championship with Del Worsham and the 2013 crown with Shawn Langdon.

Alan Johnson Racing driver Shawn Langdon is currently “on loan” to Don Schumacher Racing as the driver of the Red Fuel Powered by Schumacher/Sandvik Coromant Top Fuel dragster for the 2015 Countdown to the Championship NHRA Playoffs.  Like Johnson’s consultancy, when the 2015 season concludes, Langdon will resume his normal duties at Alan Johnson Racing.