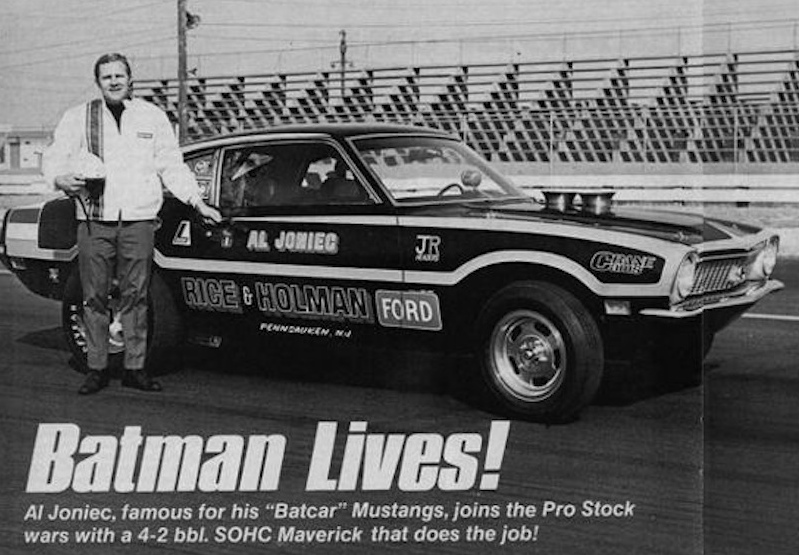 There’s something unique about the unbridled enthusiasm of a drag racer, perhaps its fueled by a Pavlovian reaction to the buckets of adrenaline that once pumped through their veins leading up to an 8-second shootout, or maybe it’s just the way their brains react as they recall their most cherished memories.

Anyone who’s watched an NHRA race on television has witnessed that out of breath, over-the-top reaction whenever John Force wins a race. It’s an infectious excitement that affects everyone within earshot.

So when RacingJunk.com had the opportunity to interview legendary Ford drag racer, Al Joniec, that same passion seemed to snowball as the discussion progressed, until that same unbridled enthusiasm surfaced. Combined with Joniec’s great sense of humor, the interview soon turned into a barrage of fun and funny anecdotes. Joniec may well be the most enthusiastic person to ever strap-in for a quarter-mile run.

How did it all begin?

“I was just a kid from Philadelphia who just happened to be at the right place at the right time,” said Joniec. “in the late 50s, all my friends were driving Chevys and were hanging out at the local Big Boy’s when this ’58 Ford convertible comes rolling in. The kid who owned it was named Louie and he was too young to drive, but his dad had bought the car for him and someone would drive him around.”

With all those Chevys ruling the strip, the heavier Ford wasn’t exactly competitive.

“The Ford kept losing races,” Joniec recalls, “so the kid’s old man offered $100 to anyone who could get him a trophy. That was a lot of money in those days. Even when they put a cam in it, nobody could win with that car.”

At the time, Joniec was 18 years old and broke. He volunteered to work on and drive the Ford.

“I could tell the car was skipping, probably because the cam was already worn down,” Joniec explains. “I took the engine apart and sure enough, the cam was worn out. Ford had used solid lifters earlier in ’58, so I replaced the cam and the hydraulic lifters with solids and we ended-up kicking ass with that car. We became best friends after that.”

Al Joniec was probably unaware at the time, but he was now part of a rapidly evolving racing culture that would explode during the following decade.

“I grew-up with a guy named Bill Jenkins and we were all involved in what I call the “age of discovery,” because nobody knew anything about anything,” Joniec said. “It was sort of like showing-up at a gunfight – nobody knows what kind of equipment the other guy is using. That was very exciting, but by the same token, it became kind of crazy.”

In 1958, Joniec won in the A-Stock Eliminator class.

In ’62, we got a really heavy Ford with a 406 in it, but we really started winning races when we got a ’63 Galaxie Lightweight with a 427 and twin fours. I never lost to another Ford in that lightweight.” 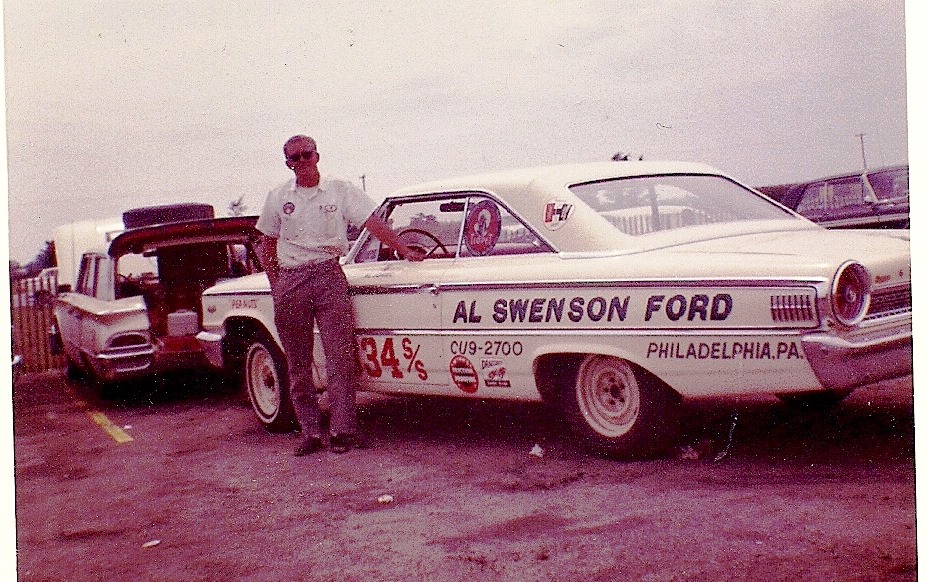 Joniec beat the Tasca Ford car and Dick Brannan with the lightweight Galaxie and then headed to the ’63 Indianapolis Nationals.

“We knew we were the fastest car there,” said Joniec.

Disaster struck after the team saw the other teams packing ice on their manifolds to cool their fuel-air mixture and followed their lead.

“We packed the manifold with ice, but a dragster blew up right in front of us as I was about to stage, so we had to wait while they cleaned-up the track. The manifold got really super cold, so when I got the green, the car just bogged out,” Joniec laughed. “That was a learning curve for us, but also shows how stupid we were back then!”

In 1964, Ford sent Joniec’s team a new car – the Thunderbolt – with an automatic transmission. Repeated calls to Ford, complaining about the automatic, went unanswered.

“It was a highly modified light weight Ford Fairlane with the latest 427 high rise (cylinder ports) engine,” explains Joniec. “It came with an automatic and we changed to a 4-speed around the end of June time frame, which cost us half the season in development time.”

“The 1964 Indianapolis race fielded 106 cars – the largest field ever to this day, I believe,” recalls Joniec. “ Everyone in the country was there. We made through to the very last 3 cars, but when I staged, my car pulled me over the line. I was screaming “NOOOO!” but bent clutch linkage dragged me across the line and we red lighted.”

In 1965, Joniec was no longer getting any assistance from Ford and was feeling depressed about his racing career when he got a call from an old friend.

“Bill Jenkins had just broke up with his team and had arranged a Plymouth ride,” Al said. “He asked me if I wanted to drive for him and I said, sure!”

Jenkins had called Joniec to drive because the Plymouth was supposed to be a 4-speed.  When it arrived, it was an automatic, so Jenkins decided he didn’t need Al to drive the car, as he felt comfortable driving an automatic.

“I did help him prepare the car but I never drove it,” explained Joniec. ‘If you look at old pictures you’ll see my name of the rear window post. There’s even a model car with my name on it.”

Shortly after Jenkins won at Pomona, Joniec got a call from Ford.”

Ford told Joniec to “come get your Mustang” and at a time when Hemis were dominating the drag racing world, Joniec found himself in possession of an OHC 427 (a.k.a. the “Cammer”).

“We took the car to Tucson and discovered the firewall was flexing due to fatigue,” Joniec recalled. “We stabilized it but still lost there.”

But that ’65 Mustang soon became the “Batcar.”

“My favorite car was the Batcar,” exclaims Joniec. “I was watching Batman in a bar and I said, That’s it. We’re going to paint the Mustang to be the Batcar!” 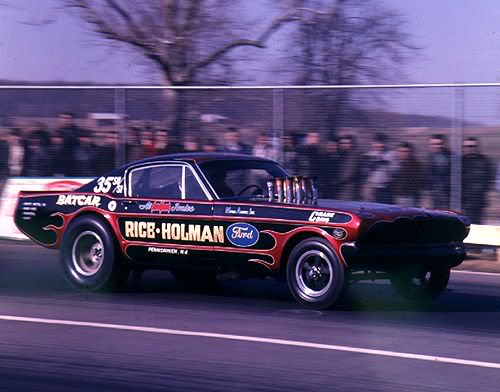 The Batcar’s OHC 427 was a very reliable engine, which enabled the Rice-Holman team to capture the 1965 Spring Nationals in Bristol, TN.

“I began to prefer the sanity of having rules, because a lot of guys were getting injured, burned or even killed in these crazy cars,” Joniec said.

In the mid-1960s, racing was permeated with an anything-goes, Wild, Wild West attitude about modifying drag cars.

“At the time, Ford decided to get back to the “race on Sunday, sell on Monday” approach,” Joniec recalls. “So in 1968 they said, “we’ve got to stop racing these crazy cars,” and they came out with the Cobra Jet.”

The Ford 428 Cobra Jet made its debut at the NHRA Winternationals held in early February of 1968 at the Pomona Dragway. Ford was sponsoring five drivers: Hubert Platt, Don Nicholson, Gas Ronda,Jerry Harvey and Al Joniec. They set up each team with a 428 Cobra Jet Mustang.

The new engine ate up the competition as four of the CJ ‘Stangs made it to their respective class finals. Al Joniec defeated Hubert Platt’s CJ Mustang in his class and then won the overall Super Stock Eliminator by defeating Dave Wren for the trophy, making Joniec the first driver to win for Ford with the Cobra Jet in “Class” and in “Super Stock Eliminator” at Pomona.

In fact, the Mustangs were actually too fast. 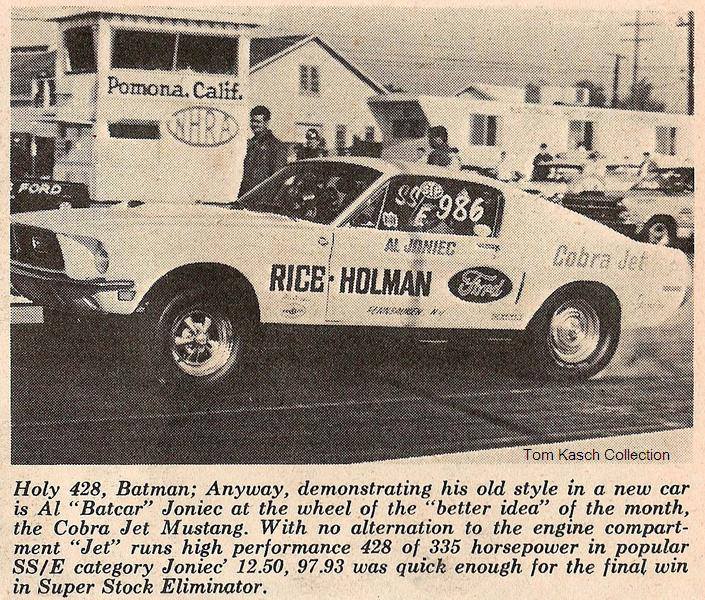 “We were at least a second faster than the record at the time, but we didn’t want to upset that advantage, so the whole thing got crazy, because we wanted to win,” Joniec remembers, “We were only racing fast enough to beat the other guy without encroaching the record.” 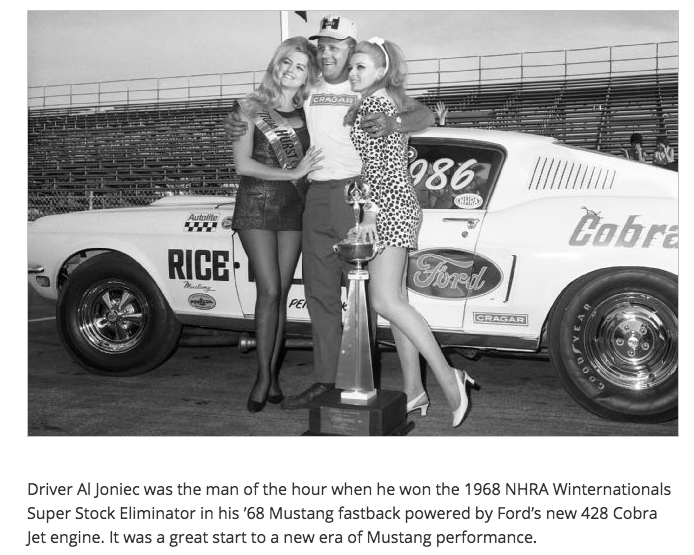 In 1970, Joniec switched to a Ford Maverick.

“We ran the Maverick in the all new Pro Stock class,” Joniec recalls. “I started out with a 427 SOHC (single over head cam) engine and as the parts, which were very rare and still are, got used up, I switched to a commonly available 429 Boss engine by mid-1971.” 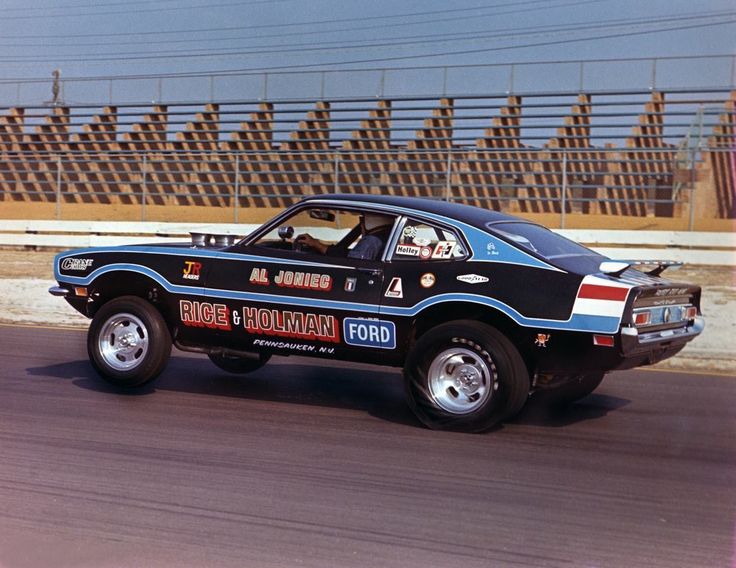 In 1971, Ford pulled out of drag racing in anticipation of the coming changes in the automotive industry.

“Ford put all of those great engineers into their emissions department,” laments Joniec. “By 1973, I was done with racing and moved on to something new.”

Ironically, 47 years later, Ford released the new super-charged Cobra Jet Mustang. Brent Hyack purchase 14 of them and painted them all to match the original 1968 Cobra Jets.

“Of all 14 of those cars, the one painted as the Rice-Holman car – my car – won the Super Stock Eliminator class again!” Joniec laughed.

So what is Al Joniec doing these days? Well, he’s still building engines, only now they’re for high-performance aircraft.

“I built the fastest automotive-powered aircraft ever!” Al said. “When it comes to technology, everything trickles down from the aerospace industry. It’s a wonderful thing!”

Al designed and built an engine to power a friend’s new high-tech airplane. The plane became the world’s fastest V-8 single engine powered vehicle by achieving a top speed of 386 miles per hour.  Al and his friend were awarded the prestigious August Raspet Award – the highest award given by the experimental aircraft industry.