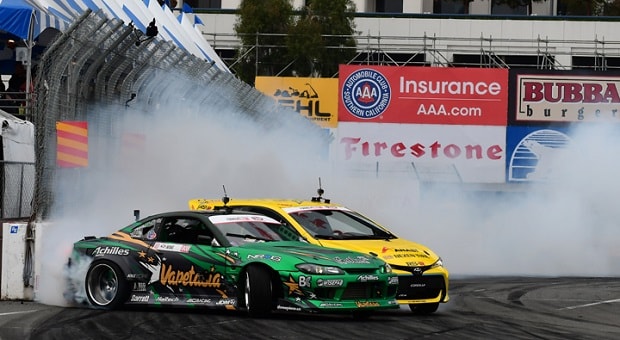 Formula Drift may be an acquired taste for some racing fans; for many drivers, it’s one of the most pleasurable forms of competition. For vehicle manufacturers, it’s a good way to market to youth; for tire makers, it’s a good way to show how much grip you can get when suspension builders do their jobs right and help get as much as 1,000 horsepower to the ground.

Formula Drift begins and ends its season in Southern California, where the [initially] Japan-bred competition had its start. Nowadays, racers come from all over the world to race Formula Drift; the current champion, James Deane, is Irish and 2017 was his first full season racing in the United States. Formula Drift and Drift Masters European Championship, two entities that have formed a strategic partnership, are looking for greater alignment and collaboration. 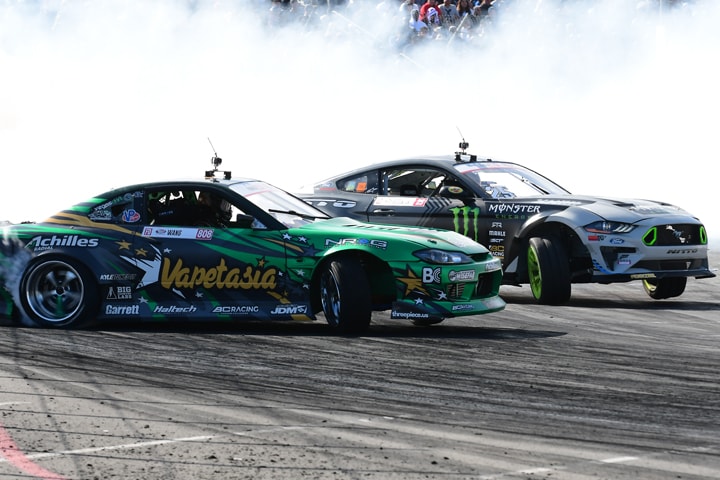 In its 15th season, Formula Drift began its 2018 campaign on the Streets of Long Beach, using turns 9-11 of the Toyota Grand Prix of Long Beach circuit that will, in the upcoming week, see competitors from INDYCAR, IMSA, Pirelli World Challenge, Historic Trans Am and Stadium Super Trucks, in addition to the Motegi Racing Super Drift Challenge (at night).

Not only do drivers earn points towards championships, so do OEM manufacturers (Toyota won last year over Ford) and tire manufacturers (Falken beat Nexen in 2017). All the cars use large engines for the short courses on which they perform. 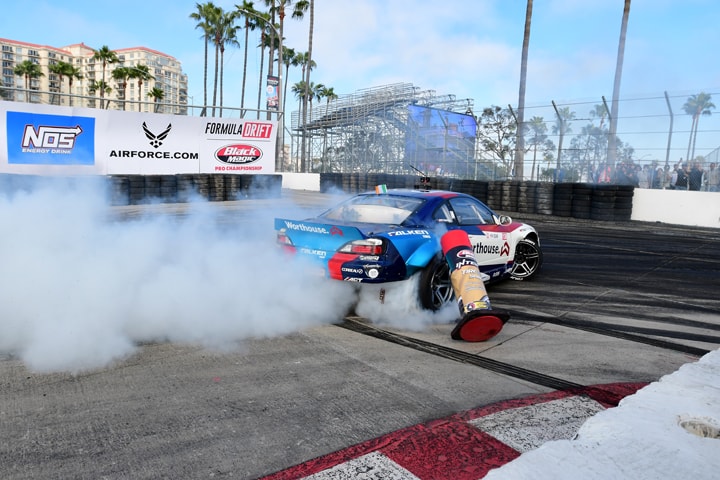 And yes, it’s a performance more than anything else, as judging the two-by-two competitors is defined. Three judges look at how close to the judge-designated line each racer gets, the angle they use and their style. Knocking off a cone, a piece of bodywork or impacting the wall can lead judges to award the win to the other driver. If they’re equal in their lead-and-chase pair of runs, the racers do their mechanical ballet a second, or even third time.

This first of seven events took place April 6-7, with standing room enthusiastic crowds for both days. Practice and qualifying took place on Friday; the Round of 32, 16, 8, 4 and the finals went on from 9AM to nearly 6PM Saturday evening. It was cool for both days, with cloud cover relenting through some of each afternoon. Heck, there was even a fog bombardment just before Saturday’s final round. 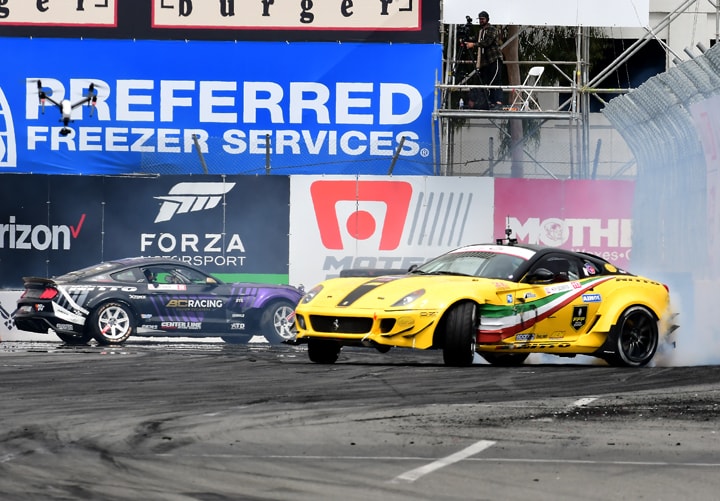 Throughout it all, engine noise and tire smoke reigned, the entire course became strewn with rubber pellets and broken body parts were strewn across the turns as drivers tested the limits of adhesion. There was even a fire in the Round of 32, when Federico Scariffo’s Ferrari 599 GTB Fiorano Drift Spec car failed to make the first turn and somehow became very expensively ablaze.

Champion Deane’s Nissan Silvia S15 broke its rear end in the Round of 8, sending Hawaiian Forrest Wang’s Nissan S15 on a single bye run to the finals against 2016 champ Fredrik Aasbo of Norway, driving a brand new Toyota Corolla hatchback. These two battled twice in regulation and a third time in OMT (one more time). The judges might have sent the pair out a fourth time, but it was getting late. 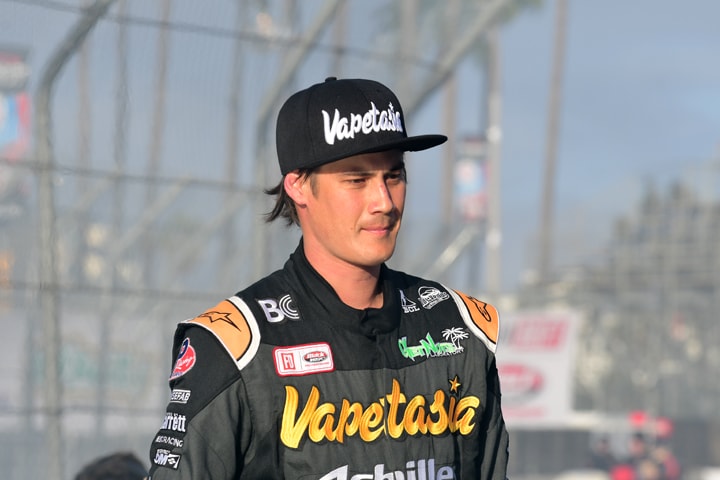 At the close, and not by unanimous decision, Aasbo got the nod over Wang, who took 2017 off to get his program ready for this year. That looked like a wise decision on Wang’s part, as he was fast, quick and deliberate throughout the event. But not quite as good as Aasbo, whose Papadakis Racing team changed the engine on his Corolla before practice began Friday morning – after an initial Tuesday test session that occurred during the Grand Prix’s media day. 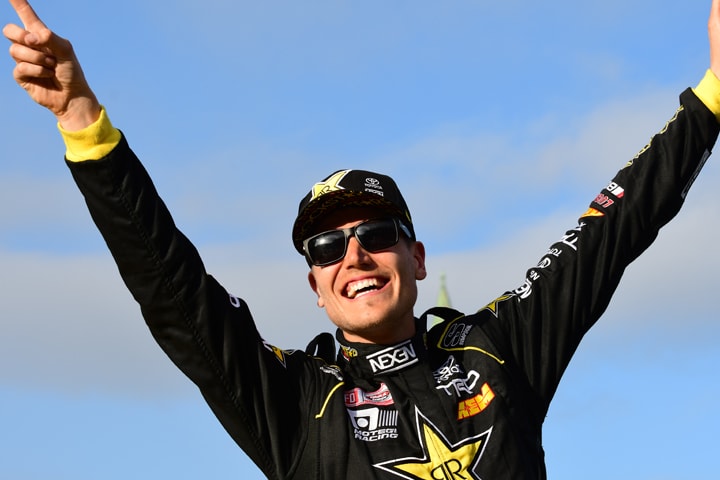 Aasbo’s race car, introduced the same day as the 2019 Corolla hatchback made its public debut at the New York Auto Show, barely put a wheel wrong throughout the weekend. He was smooth, fast and precise throughout and the judges awarded him appropriately. It’s not often that a brand spanking new racecar wins in its debut. Aasbo’s result showed both his talent and that of his team. 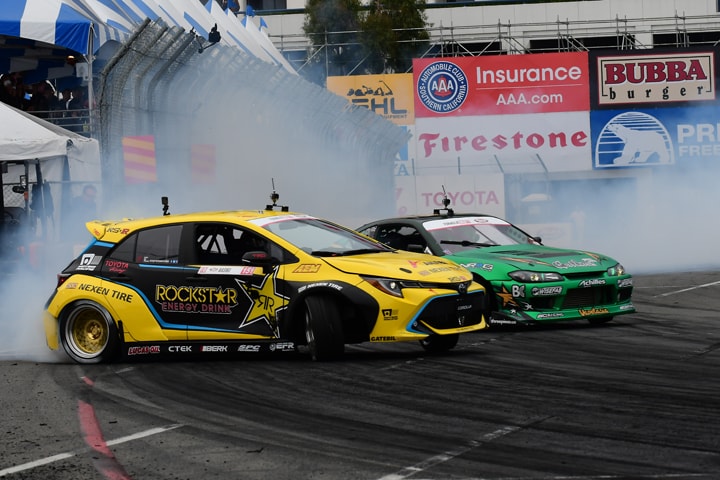