RacingJunk News > News > A ’67 Mustang Coupe Rises From the Ashes 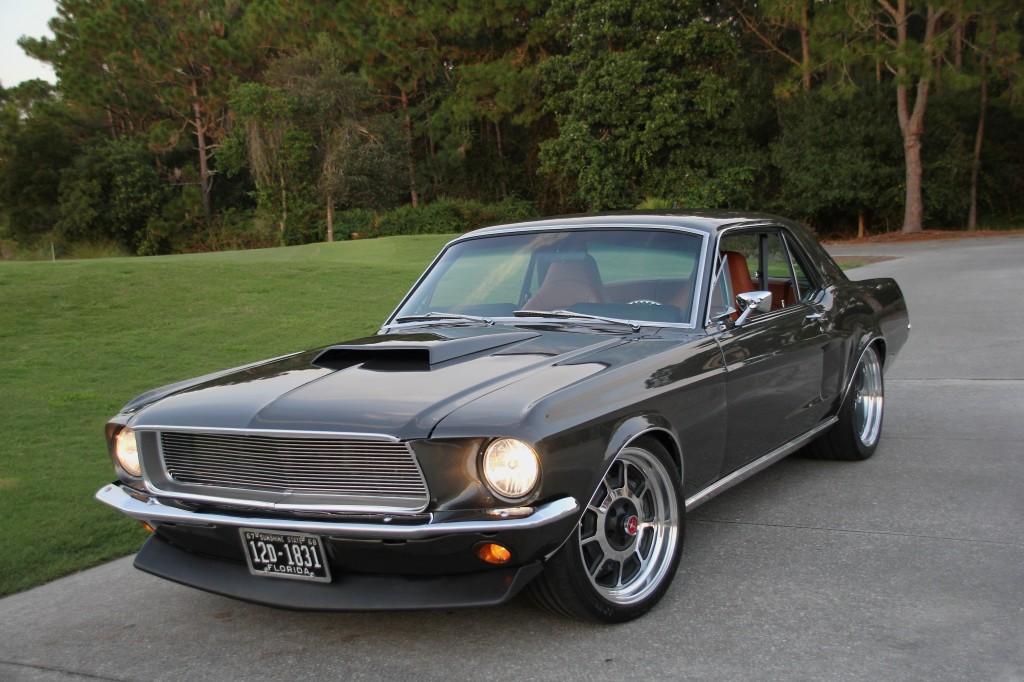 Ron Lyon’s 1967 Mustang Coupe looks stunning now, but at one point it had been left for dead.

Ron’s daughter and son-in-law, Stacy and Kyle Tucker, own Detroit Speed and Engineering (DSE). The company started out working with first and second Camaros, Firebirds, Novas, Chevy II’s, Monte Carlos, Chevelles and other GM cousins, and are known for some of the hottest builds in the industry, including the Twisted Camaro.

A few years ago, Detroit Speed was looking to move on to parts and builds for the early Mustangs. In stepped Ron, who had just purchased a museum quality 1966 Mustang Fastback. DSE took it for use as a development car for 1964-1971 Mustangs. After the development, they continued to use the ‘66 on the show circuit and race tracks to demonstrate the capabilities of the DSE Mustang parts and components. This car also went along to a major competition with other selected cars from all over the country. After some very rough testing through autocross, road course racing, go and stop contests, technical inspections, etc, Popular Hot Rodding magazine named it their “Muscle Car of the Year”.

As a result of the success of that car and the acceptance of the products in the market place, DSE continued to use the car in the DSE marketing effort and Ron was pretty sure he’d never see the car again!  What was a Mustang lover to do? By another one of course.

In the course of their testing and touring, Kyle and Stacey  had picked up a 1967 Mustang to use in the validation of the design for the mid-year cars (1967-68). Since Ron was getting a bit anxious to get his ’66 back, Ron’s daughter convinced him that this wrecked ’67 was a fair deal. Apparently, daughters can be VERY persuasive!

The ’67 has an interesting background. Found in San Antonio, Texas, an area known for little rust, it had been wrecked in 1975 with 56K miles on the clock and put into storage for 37 years until secured by DSE. They installed a complete Aluma frame front suspension and steering, a complete Quadra Link rear suspension, deep tub inner fenders and sub-frame connectors . They had also repaired the pushed-in rear panel and trunk lid as well as front end and right rear quarter panel originally damaged back in ‘75. The hood, right fender and right door skin were also replaced with new parts.

The idea of the vehicle was starting to grow on Ron so Stacy threw in a set of Michelin Pilot tires previously used on her autocross car – 315/30-18’s on the rear and 275/35-18’s on the front – to seal the deal. Ron agreed and then took over the rest of the build.

The ’66 that Ron “donated” to DSE had a built 302 in it, and since DSE was installing a crate Roush/Yates Coyote engine with 560rwhp, DSE gave Ron the 302, which has Eldebrock aluminum heads, intake, carb and Comp roller cam and rockers with a grind that gives  more torque at the lower rpm levels. Ron wanted to hook it up to an automatic overdrive with 3:25 gears for best gas mileage and cruising at 2,000 rpms (70mph).

The exterior paint is a Chrysler Dark Titanium and was applied by Tom Klamo of Edgewater, Fl. It’s a metallic grey with a couple of drops of green, which at certain times in the sun reflects a slightly brown cast. Bright rocker moldings and trim give it a nice contrast.

Chrysler Crossfire seats help add a little headroom too because of their thin seat bottoms and the design was actually of Mercedes origin. Dyna-mat was used for insulation throughout. The dash has aluminum brushed trim with Classic gauges. Gen IV Vintage Air HVAC with electronic controls keeps some cool flowing on those hot summer days in Florida. Tilt steering from Ididit and a banjo style steering wheel from Budnick helps it turn. The Locar shifter is mounted further back than stock as the seats have been moved a little further back too so Ron fits a little better. The rear seat has been sectioned and narrowed and the frames welded due to the tubbed wheel wells. The material for the headliner is an imitation leather in black. The seats are a combination of saddle leather dark tan with black trim. Door panels as well as all the trunk panels are also the same. Edward Schreck of Deland was responsible for the excellent craftsmanship throughout the interior and trunk.

All told, (including time off for Ron’s knee replacement!), the project took 18 months to complete. The ’67 is more than capable of holding its own on a road or autocross course, but Ron likes to think of it as more a cruiser that has been resurrected and risen from the dead to live on. “But kids,” he warns his daughter and son-in-law, “stay away from this one!

About Gary Rosier 73 Articles
Gary Rosier took up photography 4 years ago in his retirement, but has discovered a passion for covering automotive and aeromotive events, particularly around Daytona Beach, FL. You can also find him on Facebook and his own site http://www.carsplaneslandscapes.com.

1 Comment on A ’67 Mustang Coupe Rises From the Ashes