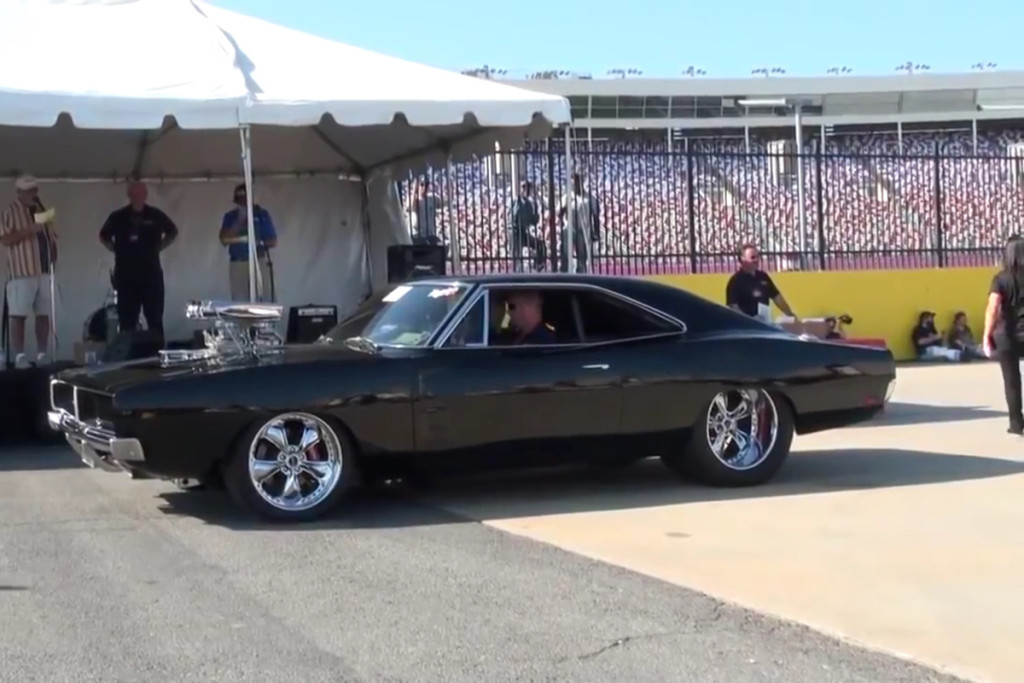 Meet Roxanne, a less than docile 1969 Dodge Charger RT with a blown 572 Hemi.. Even better, she’s very far from stock. In fact, according to Robert Dahlinger, her owner, there isn’t a single thing about her that’s stock except for maybe some of the outer sheet metal. She’s fully custom-built, mostly by hand, by the guys over at AK Rods & Customs who did one helluva job putting her together. 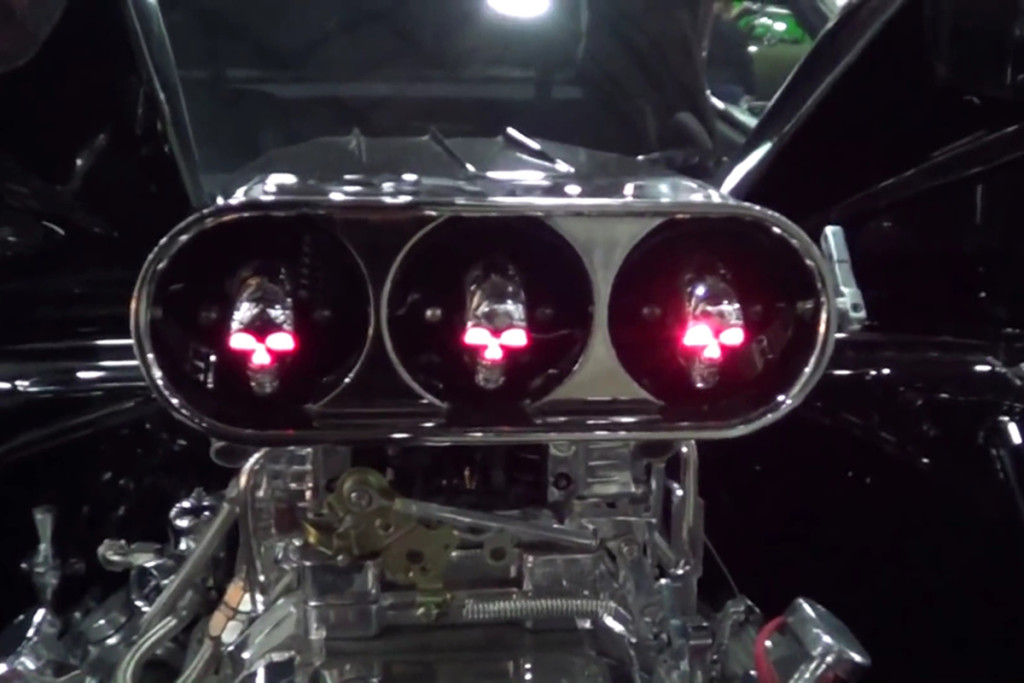 As you can see from the pictures, Roxanne is powered by a 572 cubic inches Hemi. The engine, block and heads are all aluminum. That huge 8-71 blower? Also all aluminum. The engine was custom-built by Big Al’s Toy Box. Helping Roxanne keep her cool is an aluminum radiator equipped with Show and Go fans, both from Be Cool. 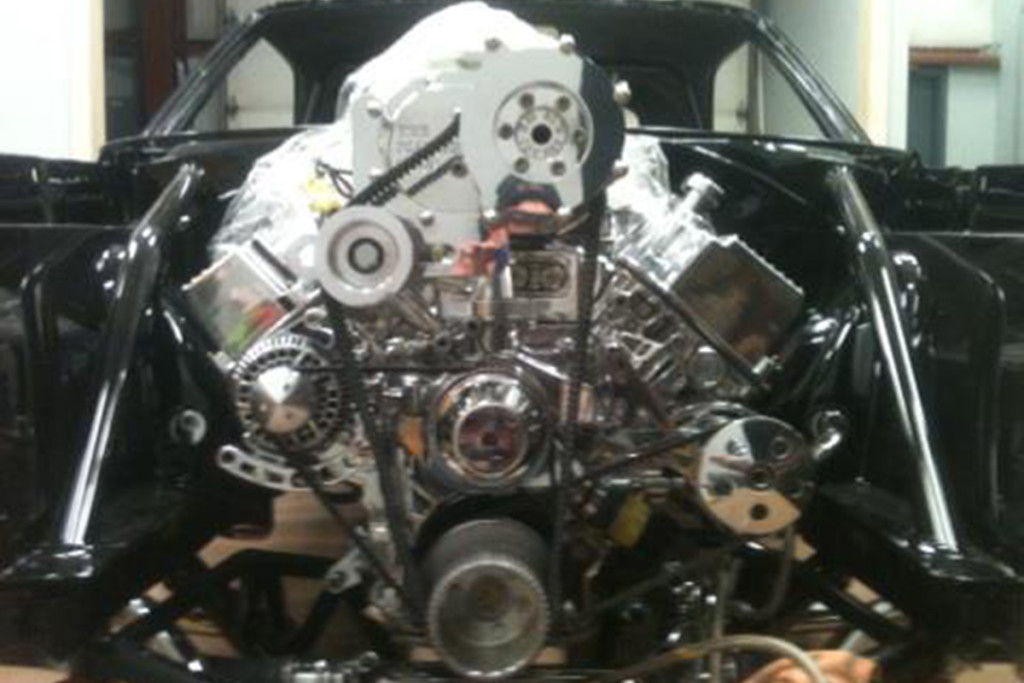 Putting All That Power to the Ground

Translating the 1200HP that her engine produces on boost is a Ford AOD built by FB Transmissions. The transmission is equipped with overdrive as well as a trans-brake for lightning launches. Out back she’s got a “Custom 9” Ford rear-end built by Moser Engineering, with 4.10 gears. The rear-end is equipped with a polished billet CNC third member to makes gear swaps easier. Turning the wheels is a set of Moser gun-drilled and star-flanged 35-spline axles. 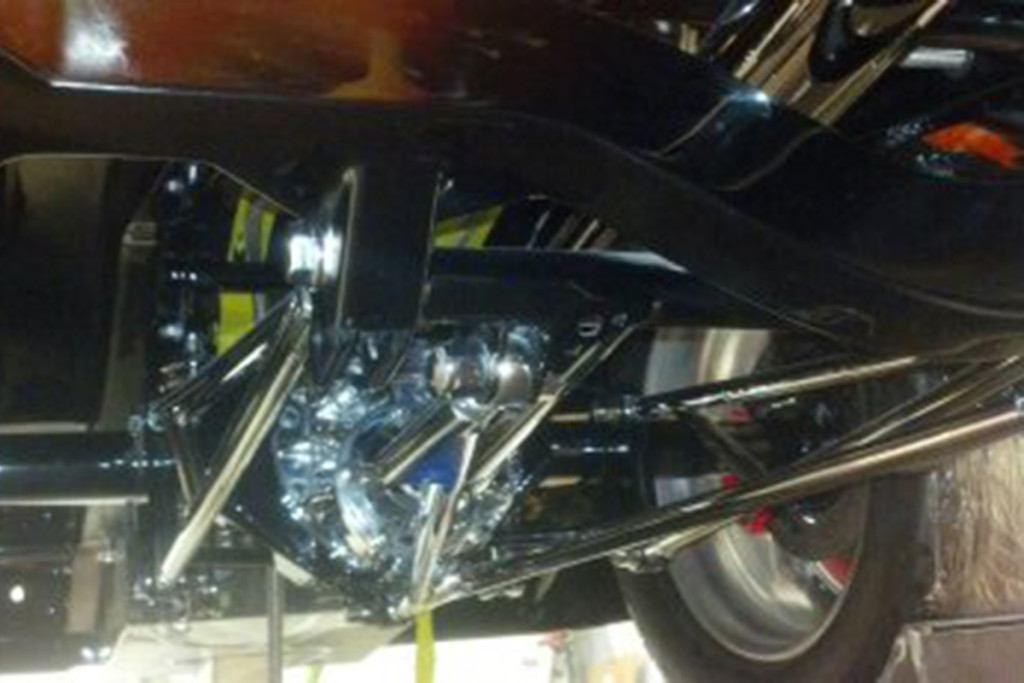 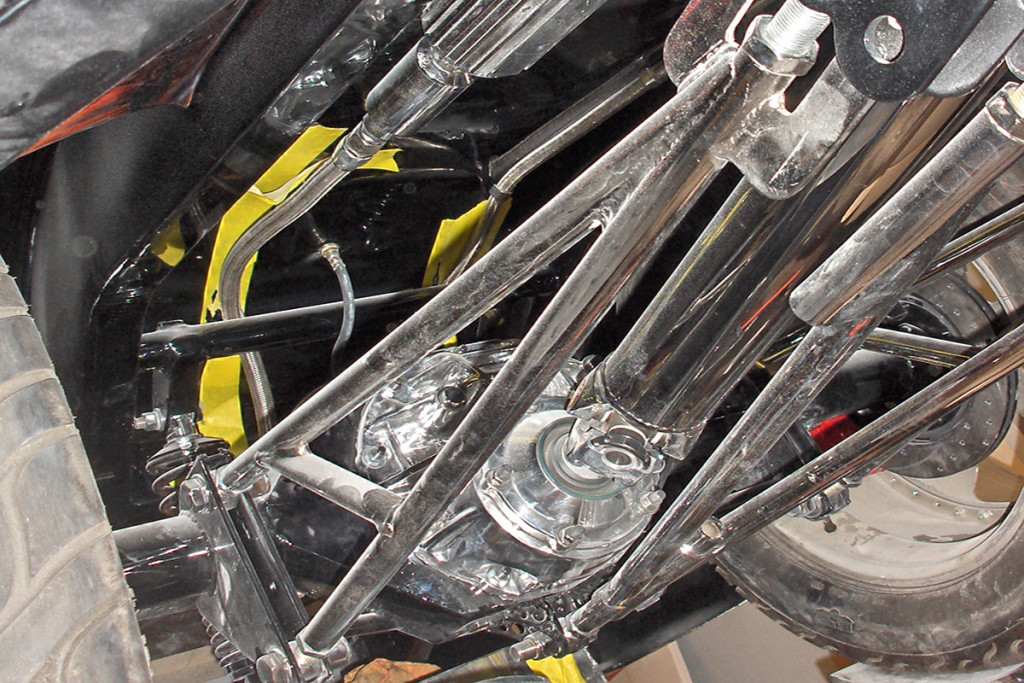 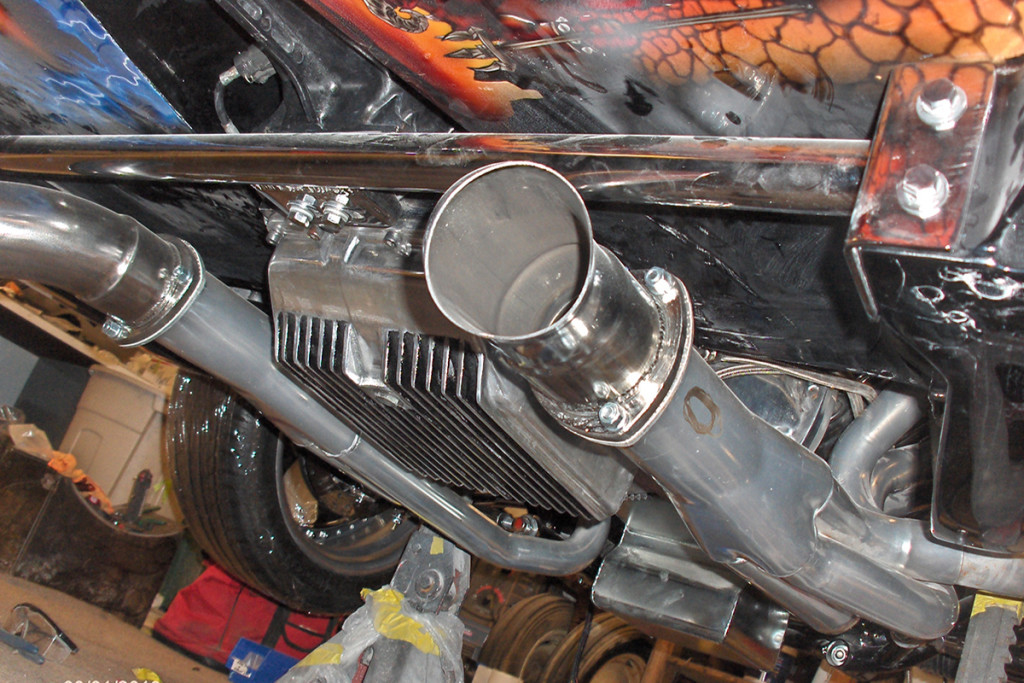 What’s that? I couldn’t hear you thanks to the down tips that spit fire just after her four-inch collector Hooker Super Comp Metallic-Ceramic-Coated headers.  Mufflers? We don’t need no stinkin’ mufflers! This is a mostly show car, after all. Roxanne gets trailered to most of the shows she attends, so she doesn’t have to be completely street legal. However, for when Robert does want to drive her on the street, she has removable Magnaflow mufflers and polished tips fed through polished stainless steel three-inch pipes.

The Brakes and Suspension to Keep Her Firmly on the Road 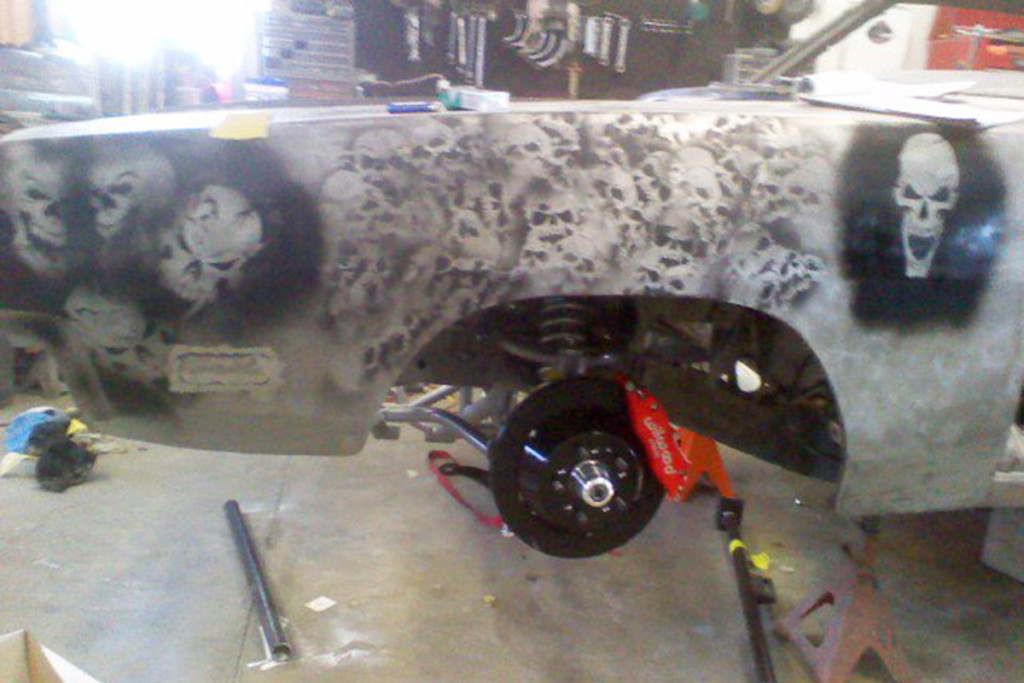 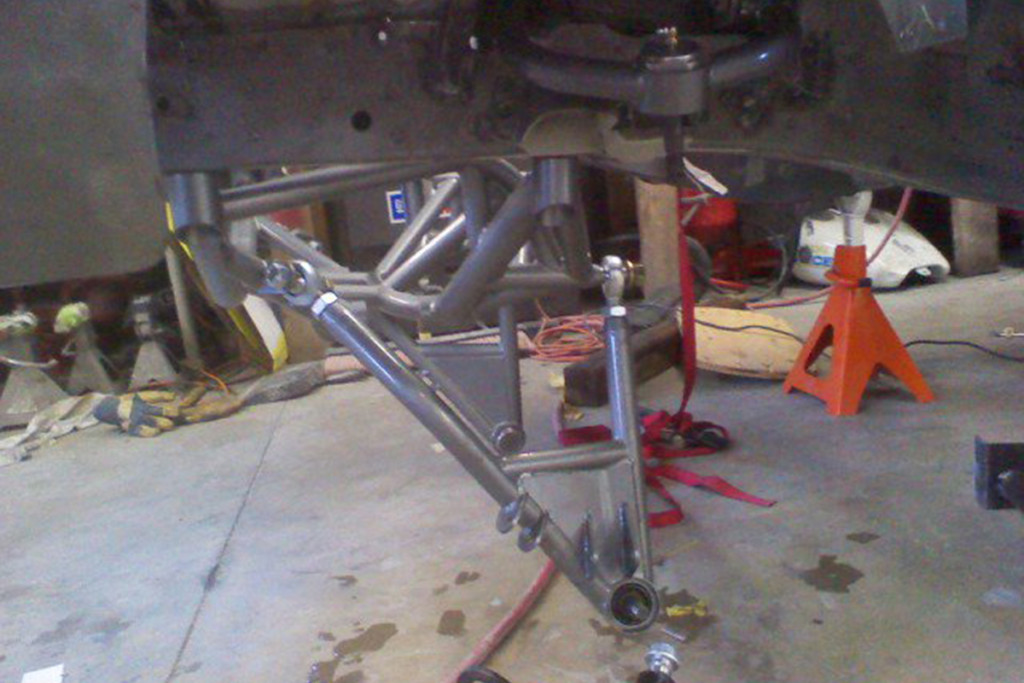 The guys at AK Rods and Customs, the wizards that brought all this together, rightly decided that a suspension beef-up was needed with all the power Roxanne could channel, so they yanked out the stock Dodge K-Member and installed a Magnum Force Chromoly K-Member. They next pulled the stock stamped upper and lower control arms and installed a set of chrome uppers and lowers. Body roll is controlled by the installation of a chrome sway bar. 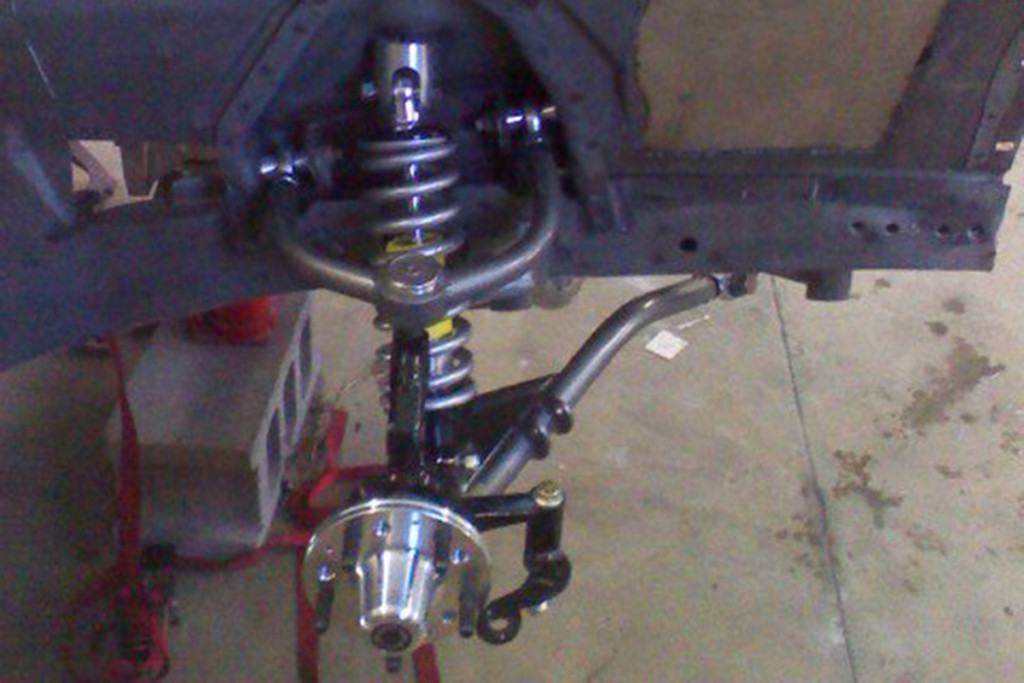 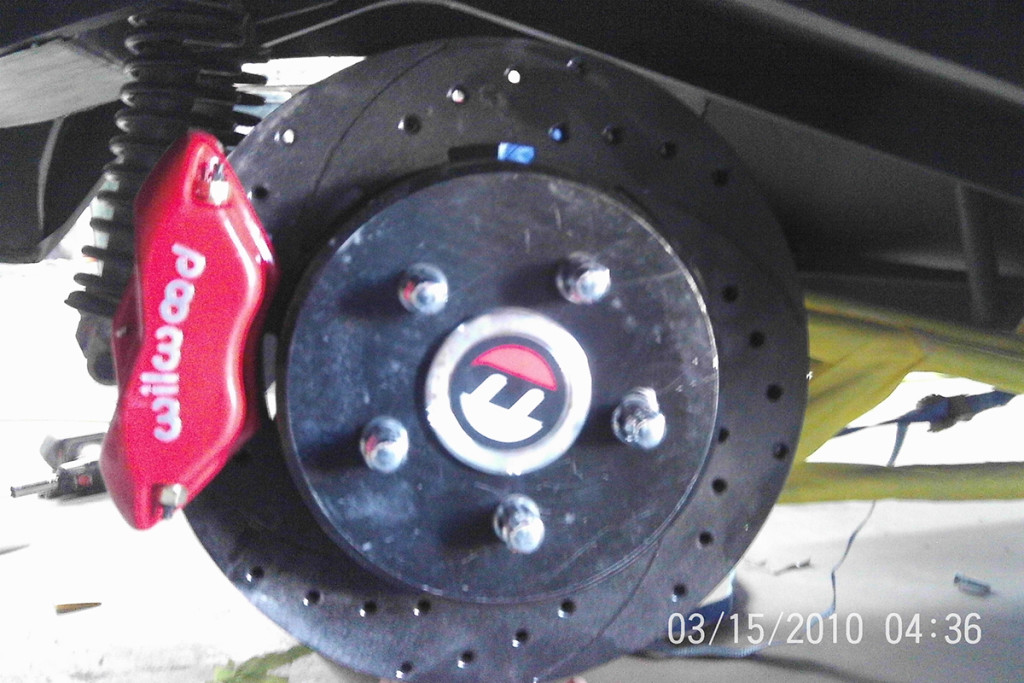 Chrome is used extensively in Roxanne’s suspension because, when done correctly, not only does it look quite a bit better than stock parts, but it’s also quite a bit stronger as well. Roxanne rolls on 19X8=inch front and 20X16-inch rear Nitrous II wheels by Chip Foose (recently of Overhaulin’ fame) and 33X22X20-inch Mickey Thompson Sportsman Radials. 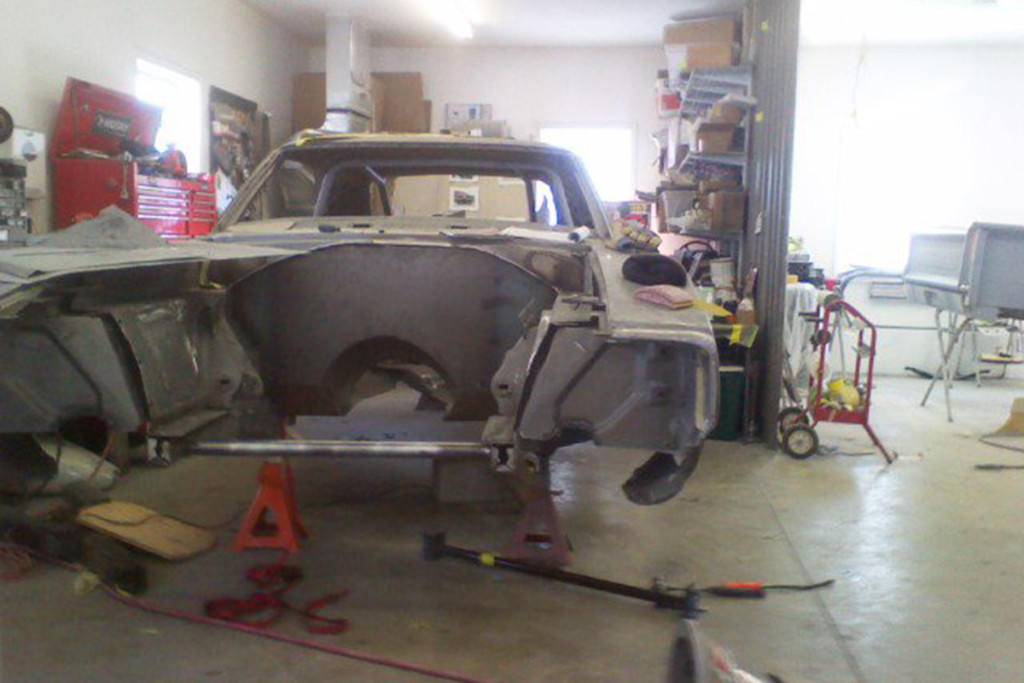 The fabricating team at AK custom-built a new set of frame rails for Roxanne because all that power her engine makes would twist the old one like a pretzel. For added strength, they also built custom a custom floorpan and firewall/bulkhead for her. To keep Robert, or whoever is driving her safe on high-speed passes (you didn’t think he’d just let her putter around on city streets and the show circuit did you?), they also fabricated a custom roll cage to her exact internal dimensions. Fesler Built supplied the billet and polished hinges inside and out that allow her doors and lids to open and close smoothly. 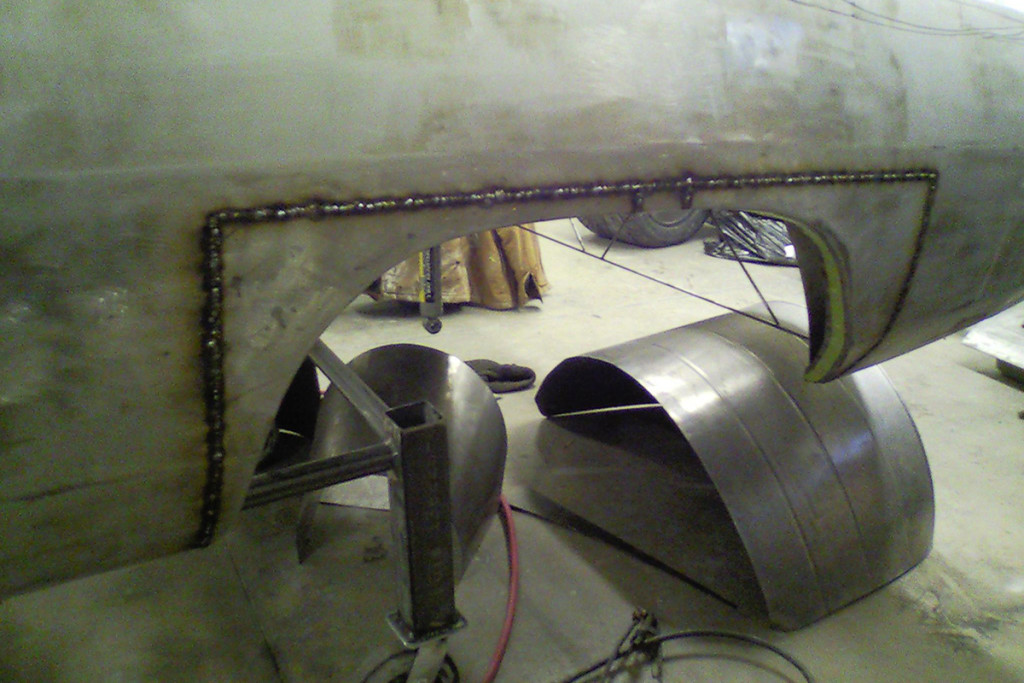 The wheels and tires are “just a little” bigger than the stock ones she wore when she stepped off the factory floor, so they also had to “massage” her body a bit. That step included stretching her quarter panels by two to three inches. Just to make her all the more eye-catching, they also exaggerated her body lines, such as extending the rear trunk lip by the almost unnoticeable amount of half an inch. Due to that massive blower on top of the engine, they also had to fabricate a custom hood, cutting yet stretching the original hood to keep the original distinguishing Mopar lines up front. 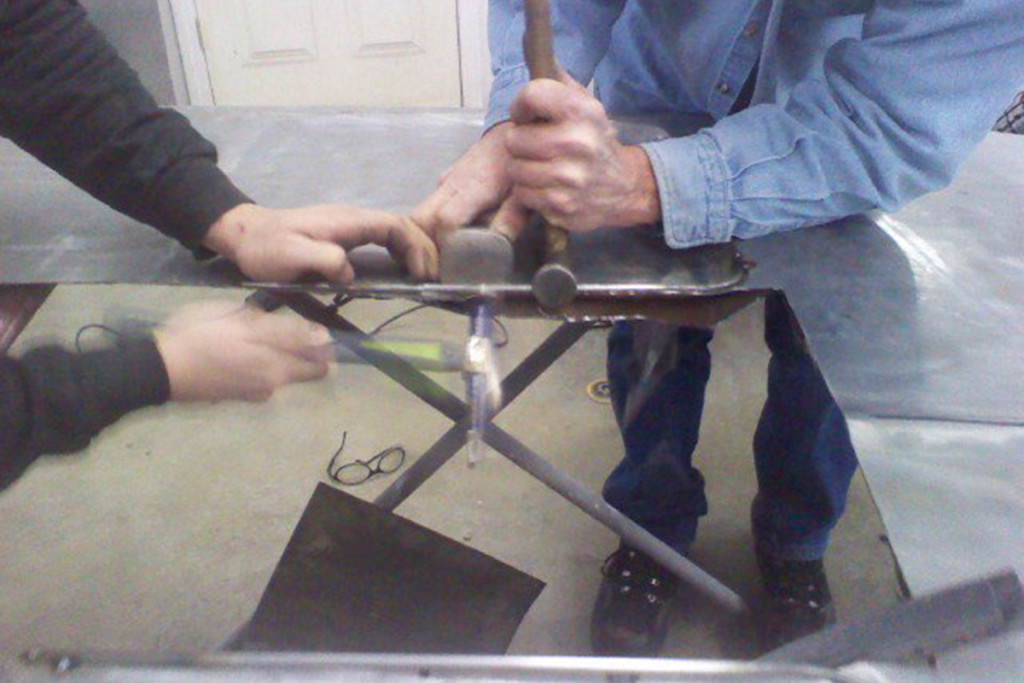 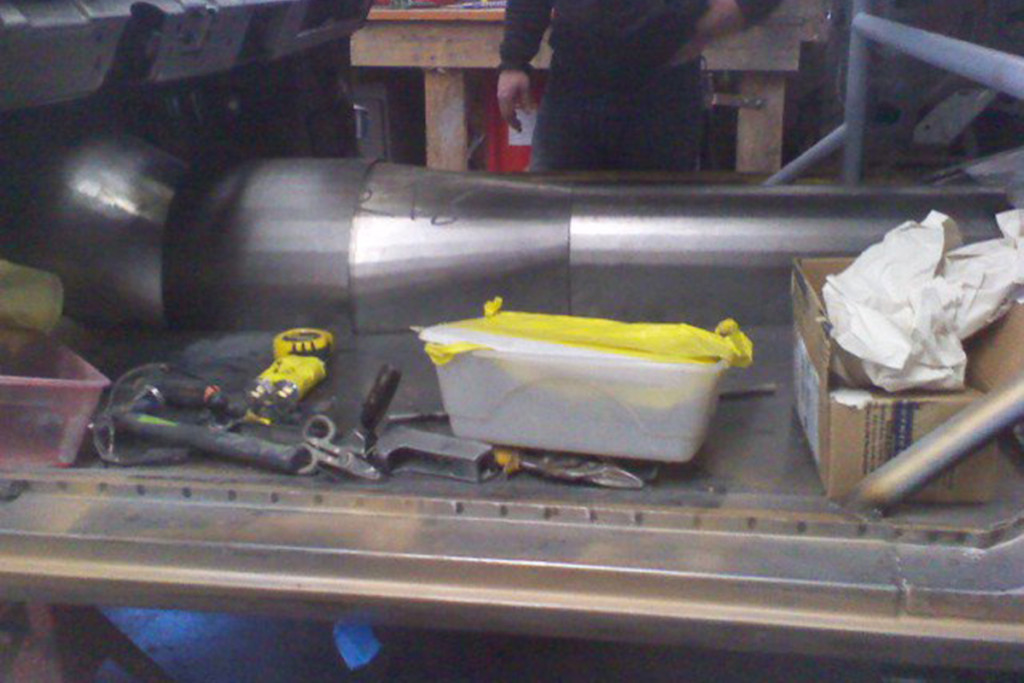 Another really subtle mod they did was to cut and tuck the bumpers just a bit, both front and rear. They then sent them off to Paul’s Chrome Plating for replating. Finishing her off outside they sprayed her with a black base and four coats of Dupont clearcoat to make her shine mesmerizingly deep for the show circuit.

If you look closely at the photos above and below, you’ll notice that Roxanne received more exterior beautification than just an expensive single-color paint job. Robert wanted some extra artwork to make her stand out even more at the shows, and Kevin and his unnamed artist really went to town here. 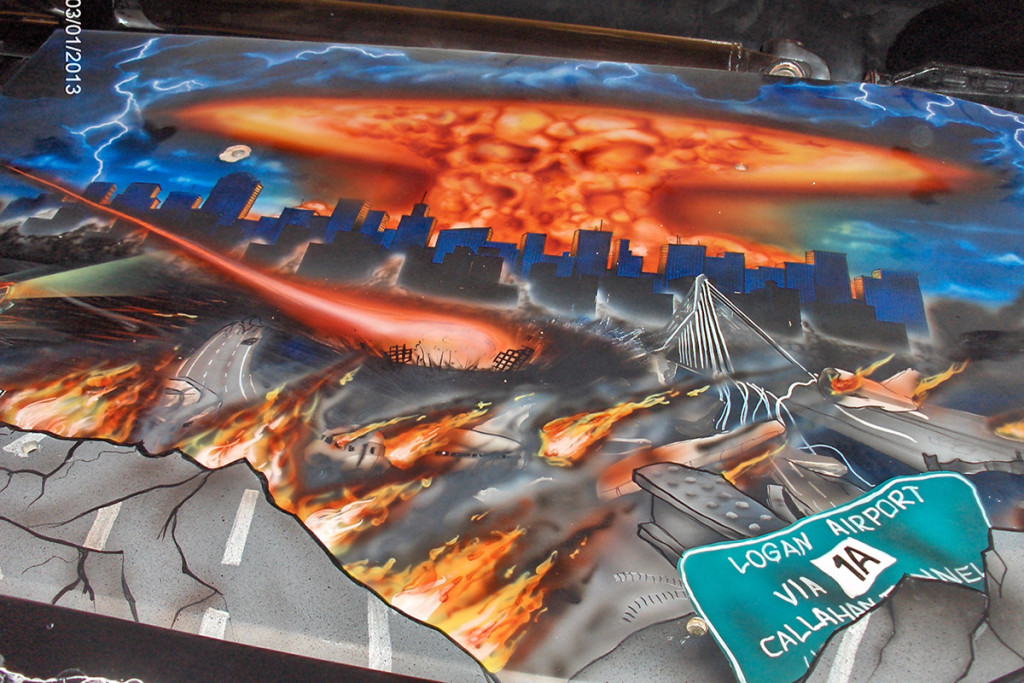 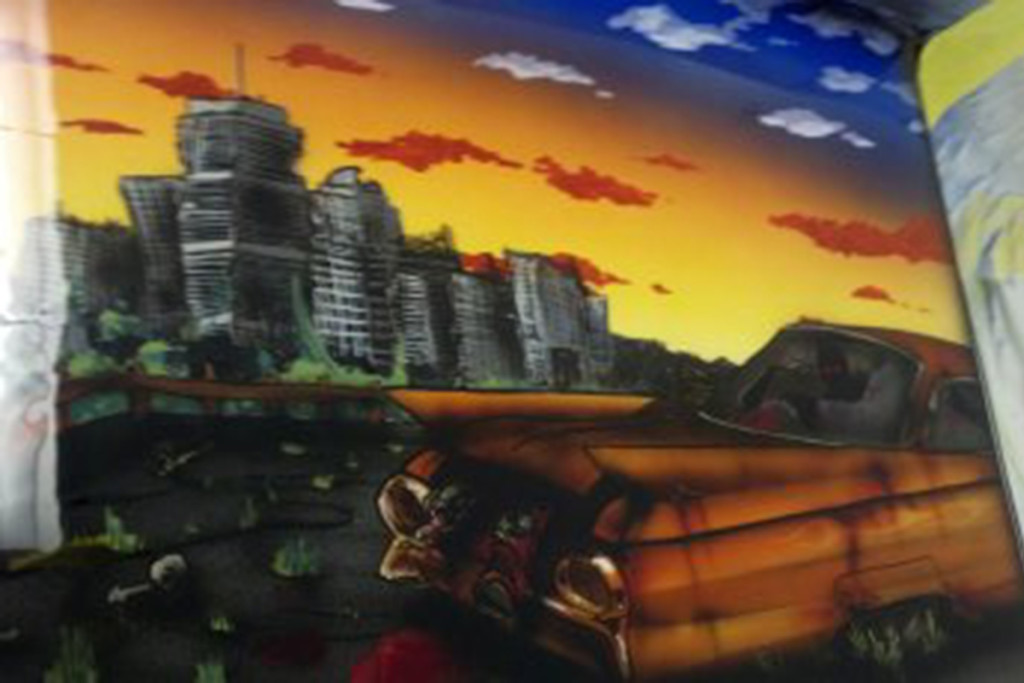 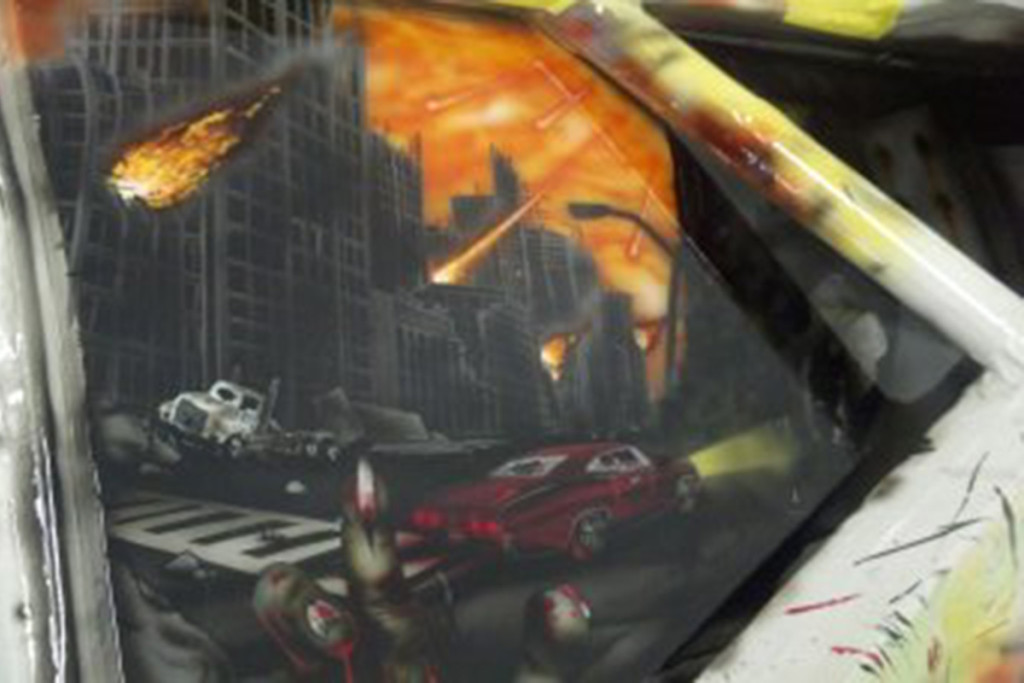 Under the driver side of the car is a large mural depicting a skyline of the city of Boston after an Armageddon-type attack, including a huge mushroom cloud. That’s the part of the mural on this side of the car that’s really easy to see. However, if you blow the photos here up as much as you can without distorting them, you’ll also see some of Robert’s other cars, including a 65 Mustang and a 67 Impala. Moving to the rear of the vehicle the mural continues, showing the aftermath of the Armageddon of Boston. The “these are my cars” theme finishes up, with his 59 Cadillac being displayed. Moving over to the passenger side of the car, one will find a “Heaven and Hell” motif, although the Hell part is much more prominent, with numerous skulls and the like being subtly and not so subtly airbrushed in a hellish landscape. 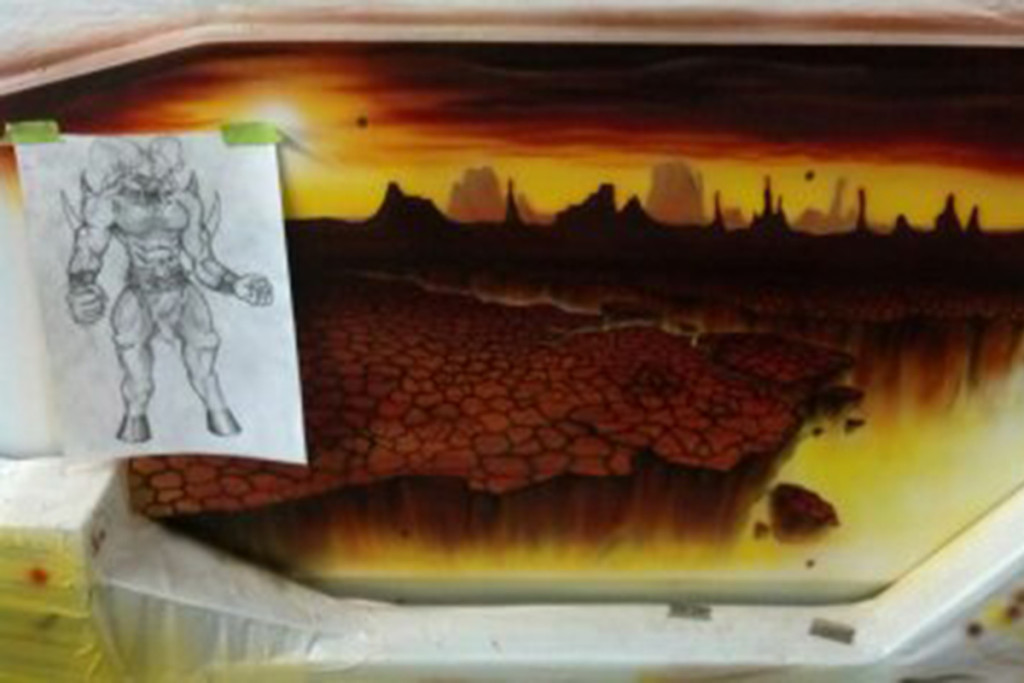 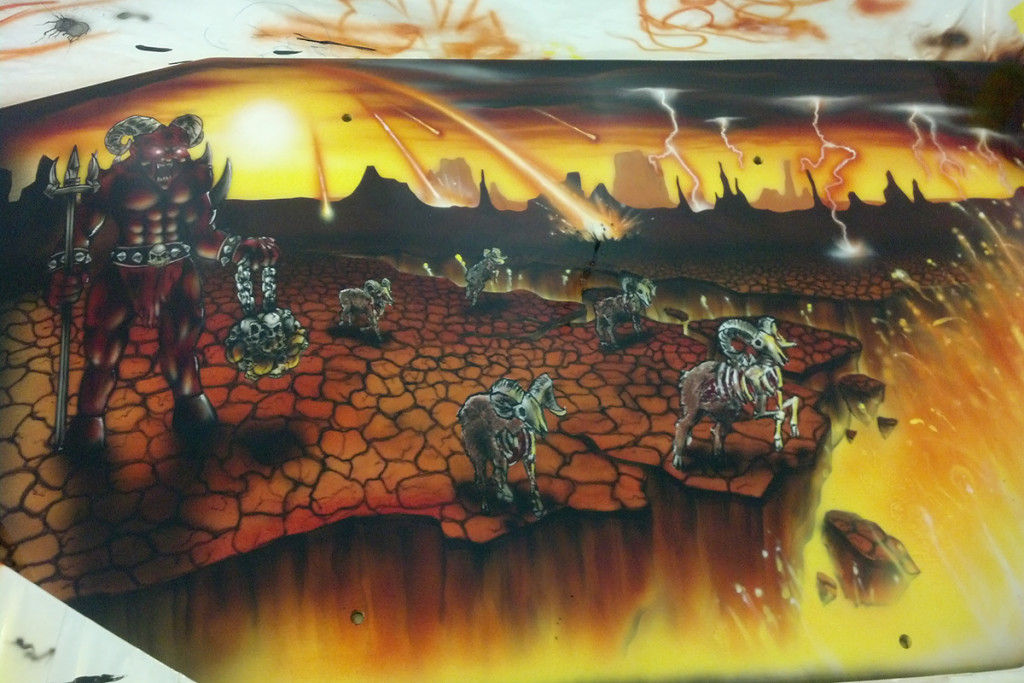 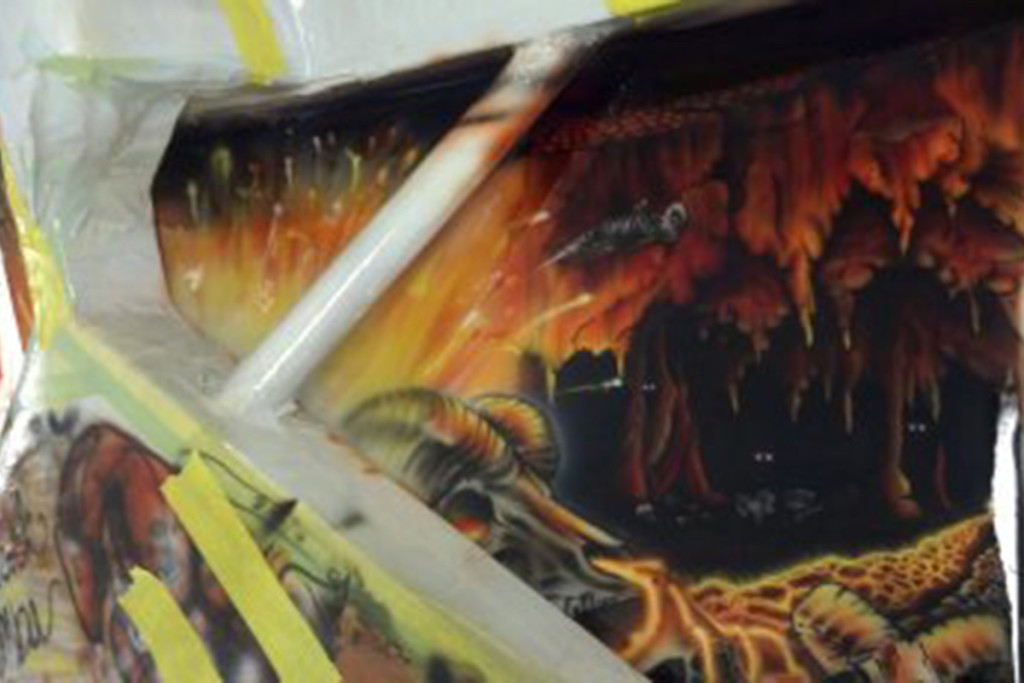 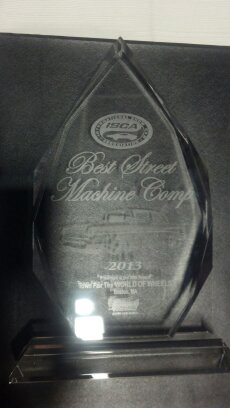 If you do a walk-around of Roxanne, you’ll notice that one motif dominates throughout and it isn’t the red lights that seem to be almost everywhere. This motif is rams heads. More exactly, Dodge/Mopar rams heads. The murals under the car have them, with them being very prominent in the mural under the passenger side of the car. The speaker box that replaces the back seat is dominated by an LED-lit ram’s head as well. All the bolt heads are also chromed and then laser etched with ram’s heads. It’s details such as these that helped Roxanne win when she was on the show circuit full time. 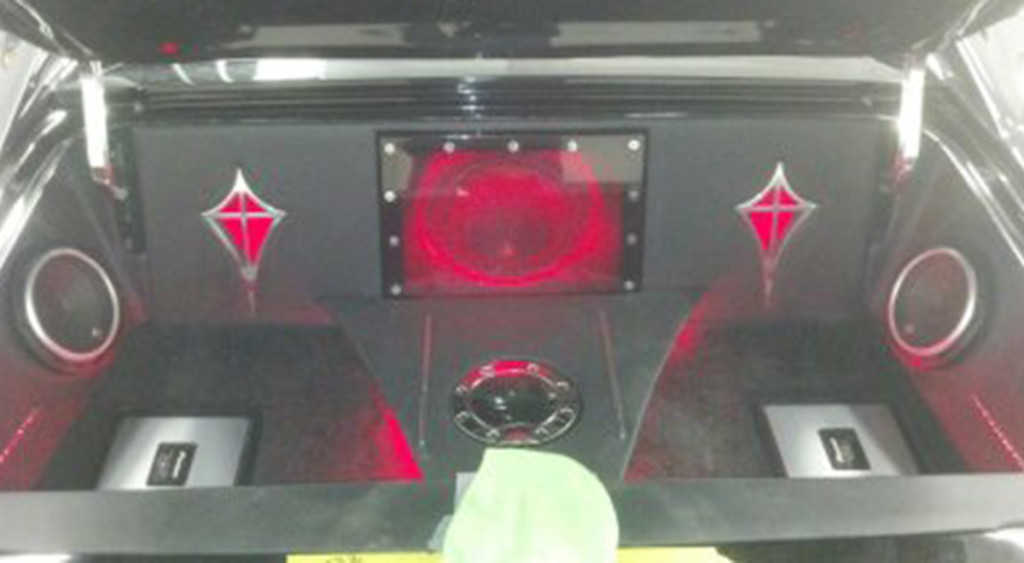 By now you’ve probably figured out that the owner, Robert Dahlinger, is a fan of 70s/80s rock favorites The Police, and especially their song “Roxanne.” Obviously there was no way that he wasn’t going to be able to blast his favorite tunes as he cruised around, so the car is also equipped with an excellent audio system The head unit is from Kenwood. Rocking the two JL Audio 8W3 speakers, the single JL Audio 12W7, and the three sets of JL C2s are Pioneer Digital amps, all wired Traffic Jamz.

Roxanne Has a Full Custom Interior 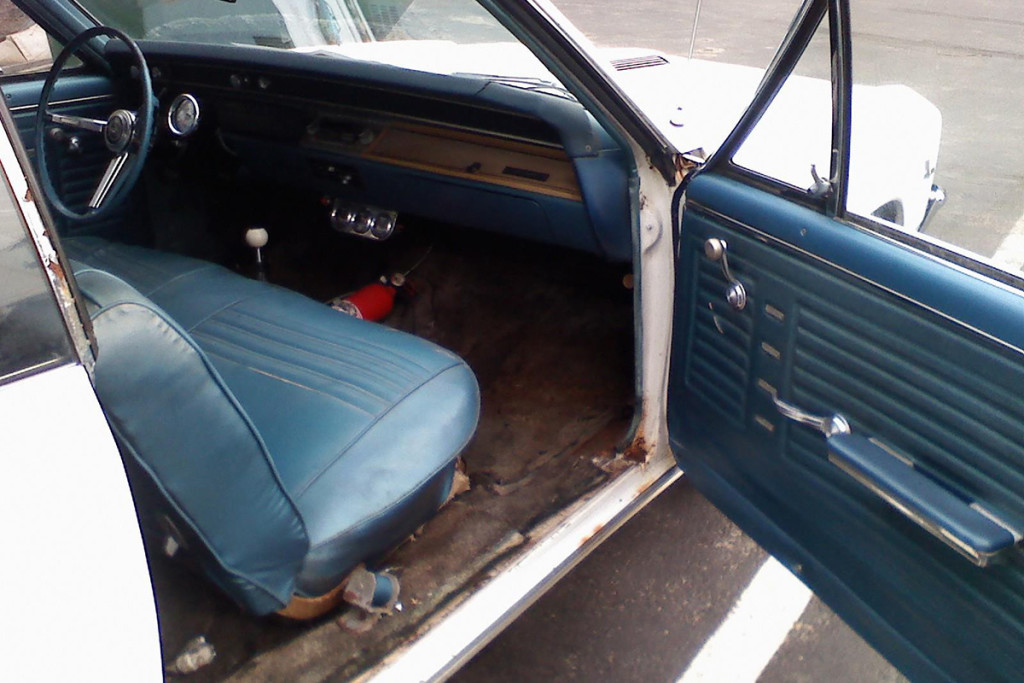 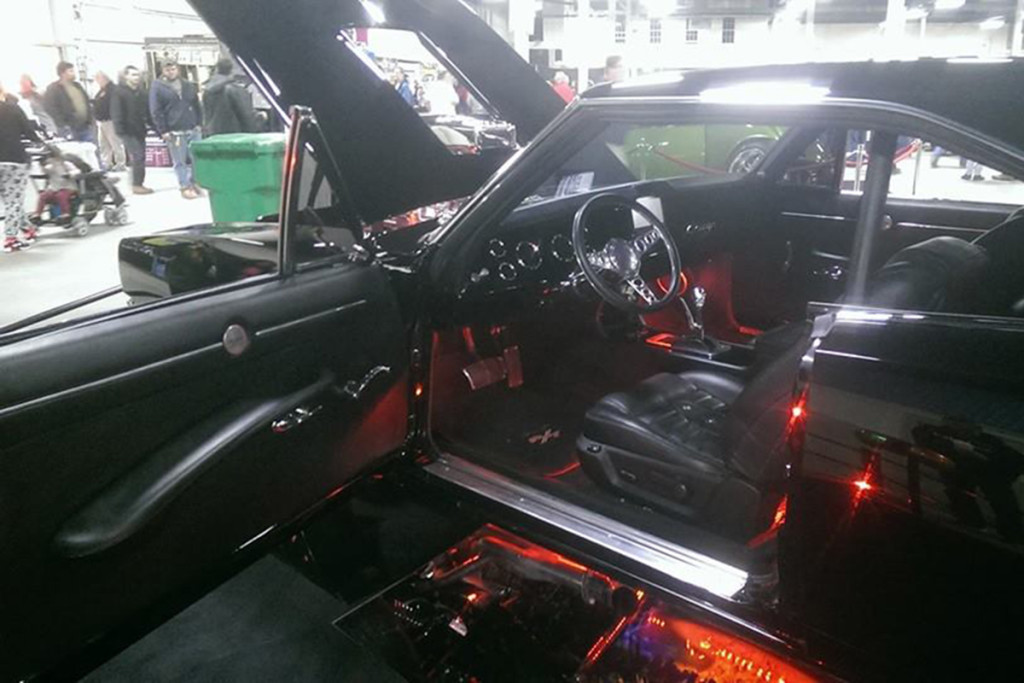 Complementing her completely custom exterior is an interior that is just as custom and just as beautiful. The dash is a hand-formed sheetmetal piece housing a set of Dakota Digital Gauges to monitor the engine and electrical systems. Keeping all the paperwork in order is a custom glovebox as well. 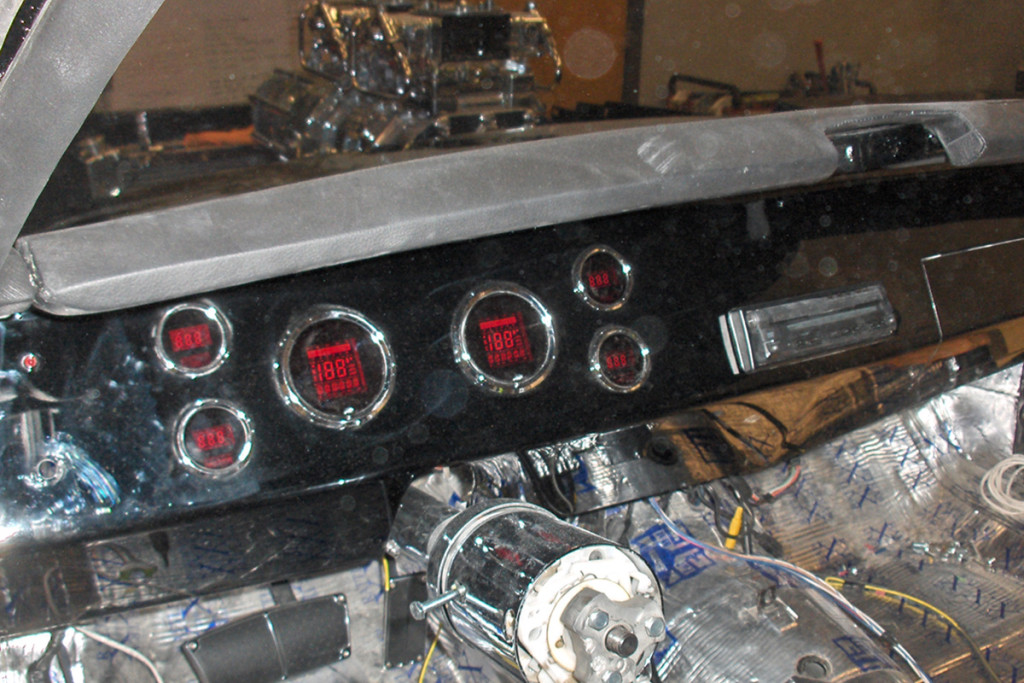 The guys at AK also built custom door panels and a custom center console, as well as the dash pad. The seats are power adjustable and covered in leather by J&S Upholstery who also supplied the rest of the leather interior. Clayton Machine Works supplied all the chrome detail pieces such as the flush door handles, window cranks, and the pedals.