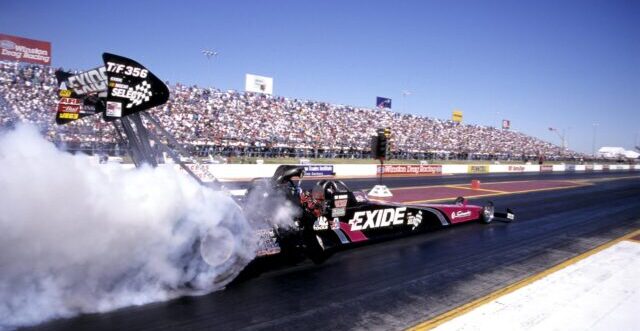 Tony Schumacher, holds the most wins of any Top Fuel driver in the history of the Texas Motorplex, and now he has been named a Texas Motorplex Legend. The award which was first presented last year will be presented to Schumacher during the opening ceremonies of the 35th annual AAA Texas NHRA FallNationals, October 14-18. Over his two and half decade career Schumacher raced in over 500 NHRA national events including over 20 FallNationals. He raced to seven final rounds and won six races and was No. 1 qualifier twice. 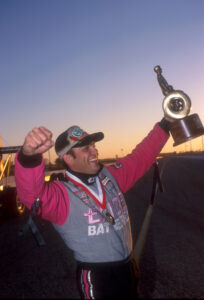 “Tony Schumacher is a huge piece of our history at Texas Motorplex and the AAA Texas NHRA FallNationals,” said Billy Meyer. “He won his first Wally here at the Motorplex and has gone on to win here more times than any other Top Fuel driver. We are honored to recognize him as this year’s Texas Motorplex Legend award recipient and are excited that he is back in the saddle and ready to win. We will have a special presentation for him during opening ceremonies and he will forever be recognized in the Texas Motorplex Champion’s Club.”

Schumacher dominated the Texas Motorplex for a decade winning the event in 2004, 2005, 2009, 2010 and 2014, but it was his first career win at the 1999 Chief Auto Parts Nationals that jump started his career. In a tight points battle Schumacher defeated Scott Kalitta for the win on the way to his first NHRA Top Fuel world championship. The first win is always special for every driver and even today Schumacher can recall the run.

“I most definitely remember that day. The win at the Motorplex is forever because it was me and Scott Kalitta in the final round,” said Schumacher. “I was getting my ass kicked and he was pulling away. It was my ninth final. I remember looking at his dragster and thinking I was getting whipped again and then his car disappeared. It was at a time that was absolutely critical because the battle for the championship was so big and so intense. There were so many people going who is that guy? Where did he come from and why is he in the damn lead?” 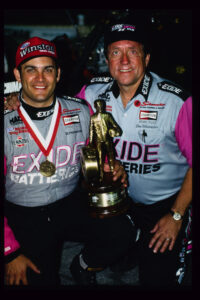 “To have my first victory at the Motorplex and to go on have such an incredible career with so many great teams and crew chiefs is special. To be recognized by the track that kind of started it all is cool. When you look back 84 wins ago I had zero wins when I was racing there. Not only did we win but we were leading the points, we had ten teams right behind us and we had the weight of the world on us. It was an incredible day and weekend in 1999,” added Schumacher.

Being named Texas Motorplex Legend is an honor that Schumacher was surprised by and accepted with humility. Throughout his illustrious career the driver with the most wins in NHRA Top Fuel history has won many national and international awards. This recognition is a first of many lifetime achievement awards for the sure fire Drag Racing Hall of Famer.

“I have won Driver of the Year and AARBA awards during my so called ‘reign of terror.’ We won a lot of races and accolades but now to be recognized by places like the Texas Motorplex means a lot. Places like the Motorplex mean a lot to me and to be recognized is a great thing. It is where I won my first race. I have won a lot of races there. It really means the most because I live in Austin, Texas and it is the closest track to my home now. It was a track that I raced Super Comp when I was coming up. There are only a few out there that you showed up for as a young kid from Chicago. The Texas Motorplex was one of those tracks. Billy Meyer built a track that everyone had to see.”

The AAA Texas NHRA FallNationals will be contested from October 14-18, 2020 with tickets available at www.texasmotorplex.com. Wednesday and Thursday will feature the NHRA National Open for sportsman racers. On Friday, October 16, Texas Motoplex will host “Friday Night Live” a full evening of speed, spectacular qualifying action and exhibition runs. Saturday and Sunday will be filled with the ground pounding 330 mph racing action from Top Fuel dragster and Nitro Funny Cars along with Pro Stock and Pro Stock Motorcycle as part of the Mello Yello NHRA Drag Racing Series.