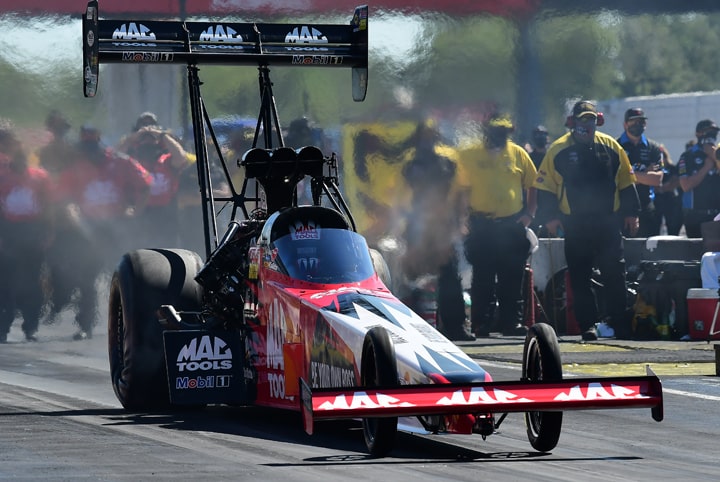 The most important thing to do as any series draws to its close is not to make mistakes. The NHRA’s Mello Yello Drag Racing Series began its sprint to a close last weekend with the 51st annual Amalie Motor Oil NHRA Gatornationals, a customary rite of spring that was postponed until the early days of fall.

During that contest, the team and its driver that led the Top Fuel standings from the traditional Lucas Oil Winternationals start of the season at Pomona to Labor Day’s Denso Spark Plugs U.S. Nationals, Doug Kalitta and Kalitta Motorsports failed to race beyond the first round of eliminations in north central Florida, thereby ceding the lead to reigning two-time consecutive champion Steve Torrence, who defeated his father Billy to win the Gators six months after their due date. Torrence then announced he’s expecting a baby girl with wife Natalie next April.

Those turns of events make this weekend’s Mopar Express Lane NHRA Midwest Nationals at World Wide Technology Raceway (WWTR) outside St. Louis even more important for Kalitta, if he is going to ever earn his elusive first World Championship in Top Fuel. As the winner of four races on this circuit, Kalitta knows this weekend is crucial: “We had a tough weekend in Florida but we put that race behind us and are focusing on St. Louis,” Kalitta said. “We have great data and the weather should be cooler, so that will be a big change for all the teams.”

While he began the season with a win at Pomona that bookended his victory in the 2019 season finale, Kalitta has, since the NHRA’s Return to Racing with four events on the Lucas Oil Raceway dragstrip outside Indianapolis, reached only one final round and a single semifinal. He knows he’s got to step it up to regain the lead: “There isn’t anything wrong with our Mac Tools dragster,” he confirmed. “ I am looking forward to these last four races because we have had success down the street before.” The man known as “Air Doug” nearly earned that first championship in 2019, falling a scant three points shy of Torrence’s total.

Steve Torrence leads the standings with Kalitta 22 points behind, Leah Pruett of Don Schumacher Racing in third, just 33 back and Billy Torrence fourth with 115 points to make up. It’s fair to say those four are the most likely to earn the title, but there’s always Justin Ashley (-146), Shawn Langdon (-165), Terry McMillan (-171), Antron Brown (-175), Clay Millican (-211) and Doug Foley (-332) in the top 10 looking to shake up the title chase. Kalitta Motorsports will support Breast Cancer Awareness month in October by showing up with pink dragsters for Kalitta and Langdon and J.R. Todd’s Toyota Camry Funny Car, as will Brown’s Don Schumacher Racing rail.

It’s evident someone from Don Schumacher Racing’s four-car Dodge Charger SRT Hellcat squad will take this year’s Funny Car title, but the question remains as to who that will be. The team carries a 10-race win streak into this week’s two-day event sponsored by Mopar Express Lane, having won the last 10 flopper Wally winner’s trophies. The quartet have been jostling for position since the close of last year’s campaign, but throughout it all, Jack Beckman, the 2012 titleholder has mostly held the advantage with the consistency that makes champions. 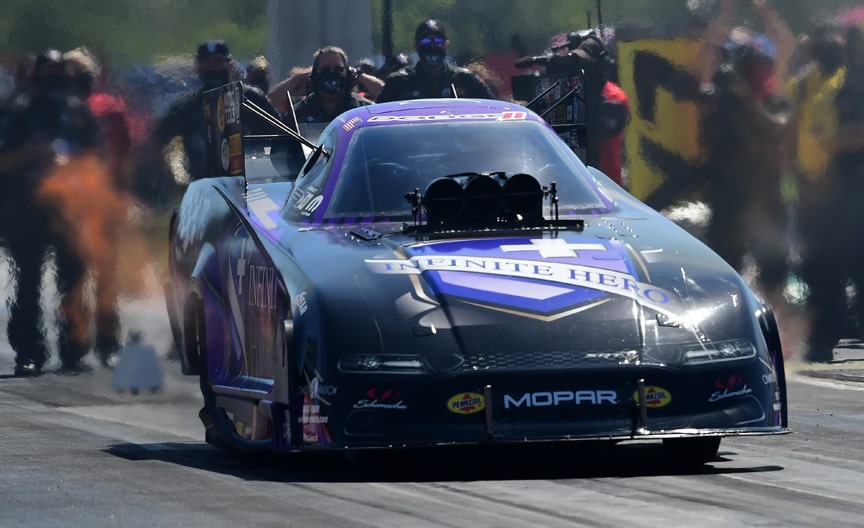 Beckman’s had good results at WWTR, having won in his championship season of 2012 and in 2016. He’s a two-time runner-up (2010, 2013) and 2012’s top qualifier. Still, the Infinite Hero Foundation Dodge was out of the running at last week’s race after a single round of eliminations after qualifying ninth. The 2020 two-race winner realizes he “stumbled at Gainesville and that was driver error. I let the car get too far out of the groove.” Still, he left Florida tenuously holding the points lead. With only two qualifying sessions, “It’s going to be a total crapshoot and those bonus qualifying points are going to be increasingly important from here on out.” NHRA awards qualifying points for top runners in each category on a 3, 2, 1 sliding scale. 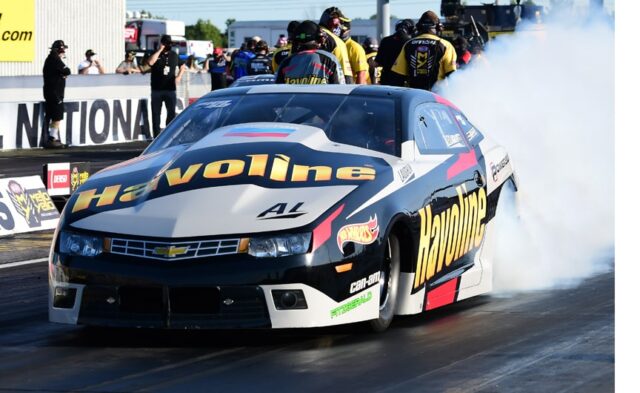 Pro Stock is yet another category that’s flopping in the wind regarding championship hopes. At the mid-point, it sure looked like this would be a battle between the two intended retirees, Jason Line and Jeg Coughlin Jr., both of whom are leaving the class as full-timers at this year’s Las Vegas finale on Halloween weekend. That’s scary enough, and after Alex Laughlin’s first victory since his 2019 U.S. Nationals at the Gatornationals last weekend, the title in this class is in disarray. Line is the current leader, but he’s got only two points in hand over reigning, three-time titleholder Erica Enders and is 34 points ahead of Coughlin Jr.

WWTR is one of the few tracks where three-time champ Line hasn’t won and he’ll remember it for a very different reason: “This is one of the tracks that I’ll never forget, no matter what happens there this weekend,” Line said. “It’s the only [NHRA] track where I’ve ever DNQ’d, so I kind of feel like that place owes me one. It’s also one of the only places I haven’t won, and if we cold change that, I think I’d feel a little better about it.”

Behind the top-running three, there’s plenty of opportunity to move up the Pro Stock standings. Laughlin now holds fourth place (-156), followed by Matt Hartford (-186), Greg Anderson (-192), Chris McGaha (-214), Aaron Stanfield (-231), Bo Butner (-234) and Deric Kramer. Sitting in 11th place, Kenny Delco is only 12 points out of the top 10, which makes the door-slammer class definitely one to watch. There’s a total of 235 points between first and tenth places; those “little” points for qualifying, along with a very competitive Chevrolet Camaro-dominated class, could make the outcome volatile during these next four races.

Pro Stock Motorcycle is retaining its reputation for yielding exciting and unexpected racing in 2020, a year where just about everything that’s happened is unexpected. Matt Smith enters this contest leading the standings after claiming his first win of the season on the Denso/Stockseth Racing EBR, which is surprising for an always-strong competitor who won the Mickey Thompson Pro Bike Battle at the U.S. Nationals, a race won by his teammate Scotty Pollacheck on the Strutmasters EBR. Pollacheck lies second in the points standings, 21 behind Smith. 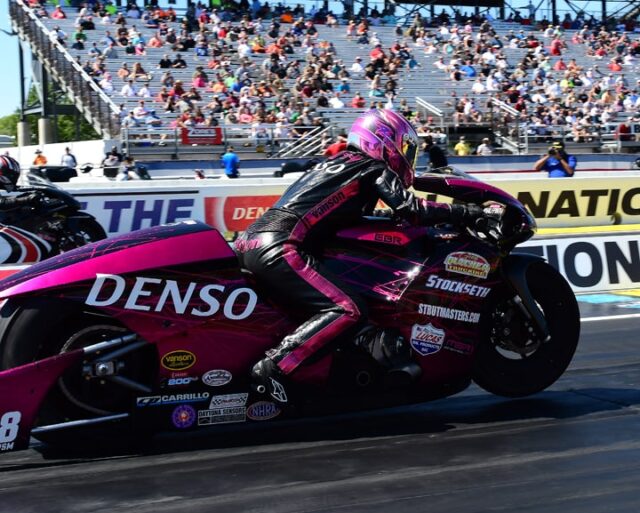 Smith knows he’s got the goods: “Right now, I think our Team MSR has the best team out here and we have the power to win this thing,” he said regarding the championship. “We’ve just got to keep everything together, but we have the power to win races and win a championship.” The MSR duo are hounded by the three-rider Harley-Davidson Screamin’ Eagle motorcycles from Vance & Hines, six-time and reigning champ Andrew Hines in third (-28), three-time champ Angelle Sampey fourth (-48) and four-time titleholder Eddie Krawiec (-64). They must also contend with Ryan Oehler, who won his first NHRA Pro Stock Motorcycle race at the season opener in Indy this past July (-111), Angie Smith on her MSR EBR (-158), Hector Arana Jr. (-158) whose father will race this weekend for the first time in 2020, Chris Bostick (-167) and Steve Johnson in tenth, the class veteran 179 points behind Smith.

There are 17 Top Fuel dragsters and an equal number of Funny Cars on the entry list, 19 Pro Stock cars and 16 Pro Stock Motorcycles coming to World Wide Technology Raceway in Madison, Illinois. After several months of racing in hot and humid weather, this Saturday-Sunday race meeting looks to have cool, power-making temperatures and only a 20 percent chance of precipitation. Highs are expected to be in the low 60s and lows could be in the low-to-high 40s. It would not be a surprise if records are broken this weekend at World Wide Technology Raceway.