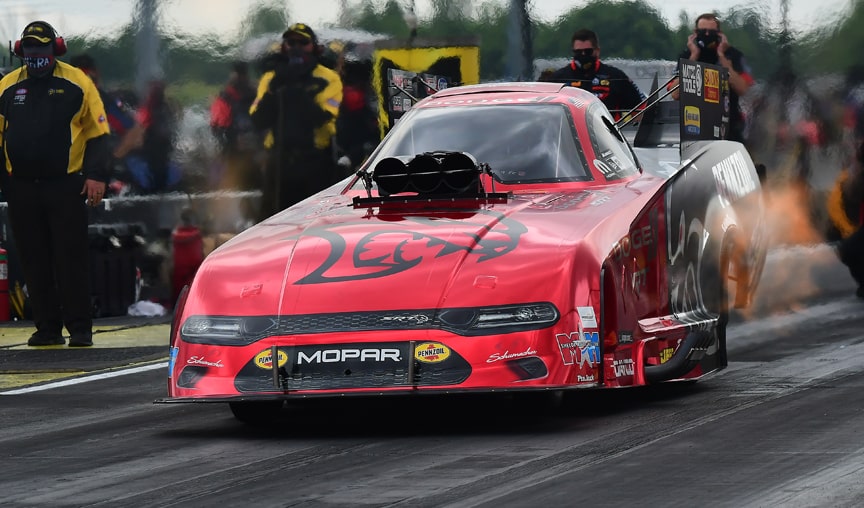 The NHRA’s Mello Yello Drag Racing Series sprang noisily back into action for two weekends in mid-July. This, after being silent since late February’s second scheduled race of the 2020 season outside Phoenix.

It wasn’t a raucous revival, with a minimal number of fans allowed to enter Lucas Oil Raceway (LOR) outside Indianapolis, Everyone was temperature-checked and masked (at least on arrival at the track) and some semblance of social distancing occurred.

In the tower that serves as suites for race control, media/photo access and for client gatherings, media were spread out in two rooms. Where there would normally be as many as 12 people working their keyboards, there were six or seven – until the second Sunday’s deluge broke through a window and caused flooding that moved the front row to the back upstairs room. Photographers were allocated space separate from writers and, according to those occupying those suites, there was plenty of space for people and equipment.

In the pits, the customary gathering for nitro start-ups was still there, but far less populous. In many instances, masks were worn around the chin in defiance of NHRA’s and CDC guidelines. The need for nitro overpowered the desire for safety, many invoking the common creed: “nitro eats everything.”

While 16-time champion John Force and his four-car John Force Racing team weren’t racing at either the first or second restart contests, many of the dismissed crew had found work with other teams. It caused quite a few head-swivels to see these people in unfamiliar places. They needed work; they found it outside JFR. On the first Sunday, following final eliminations, the Prock family came out to see friends in the community, while keeping quiet about the future of the JFR team.

What this absence did was give NHRA the opportunity to showcase other Top Fuel and Funny Car competitors who might have been cast to the side with the appearances of Brittany and John Force, Robert Hight and Austin Prock. 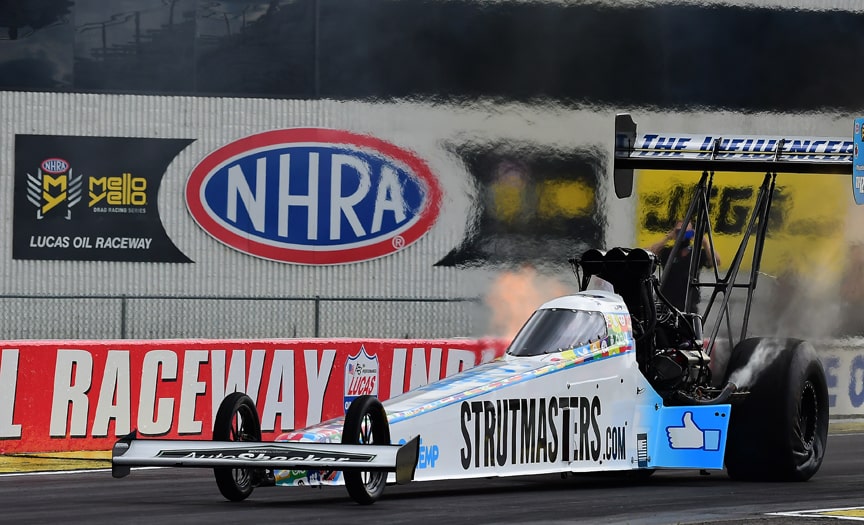 Unfortunately, rain denied one of the most exciting and enticing Top Fuel matchups in the second weekend’s final eliminations. One second generation racer against another was on the menu, with Justin Ashley taking on T.J. Zizzo. Ashley runs the full series; Zizzo tends to race near his Chicago-area home, always including Indianapolis. He stands by the credo that you only race when and where you can afford to do so. 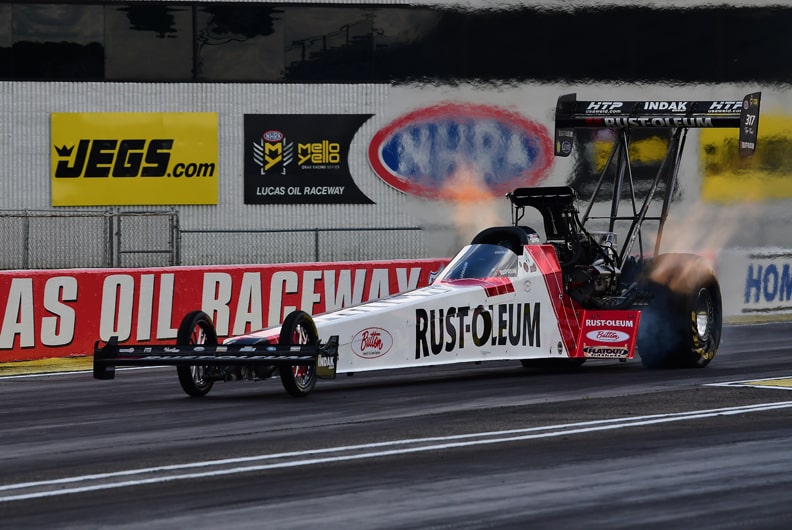 Zizzo has been a thorn in the class’ side when he does race as he’s quite good behind the wheel and his team has acquired the right parts to go fast. Ashley has many more advantages, including the good judgment calls of tuner Aaron Brooks, and a bunch more financial support than the Zizzo clan can muster on a regular basis. No matter who wins this race, a first-timer will hoist the Wally winner’s trophy when they race at Indy during the Big Go on Labor Day weekend. 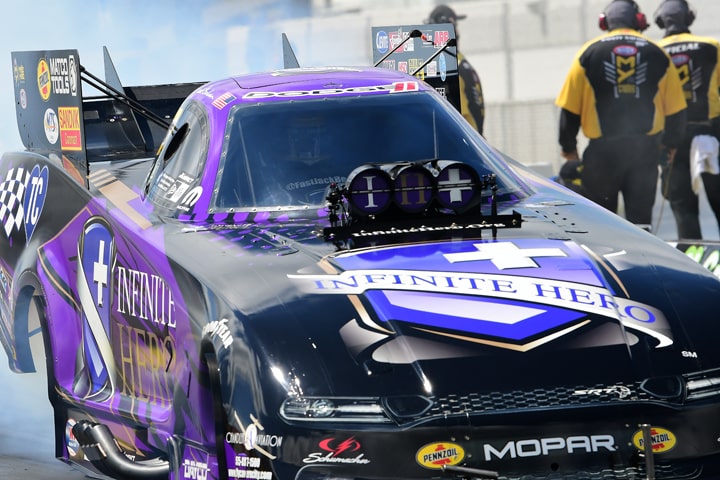 The Dodge Charger SRT Hellcat drivers for DSR have been operating at maximum capability and leaving the rest of the class in their wake. But not having the fastest and quickest driver in the class, Hight, on-site and racing definitely casts a pall.

NHRA took a couple of weekends off after those two contests and will regroup next week, the first weekend of August for a third visit to Lucas Oil Raceway. JFR is still not on the entry list; they’d intended to return at the Menards NHRA Heartland Nationals two weeks before the DENSO Spark Plugs U.S. Nationals, but with that race postponed until fall due to county COVID-19 restrictions, perhaps we’ll see JFR back in action next week?

No one knows for sure, but we do know that NHRA put on two good races with a third standing in the wings. While it would be preferable to show their wares across the country, operating close to so many of the teams’ headquarters marked a smart decision on NHRA’s part.