RacingJunk News > Racing > Drag Racing > Missed it by THAT Much… 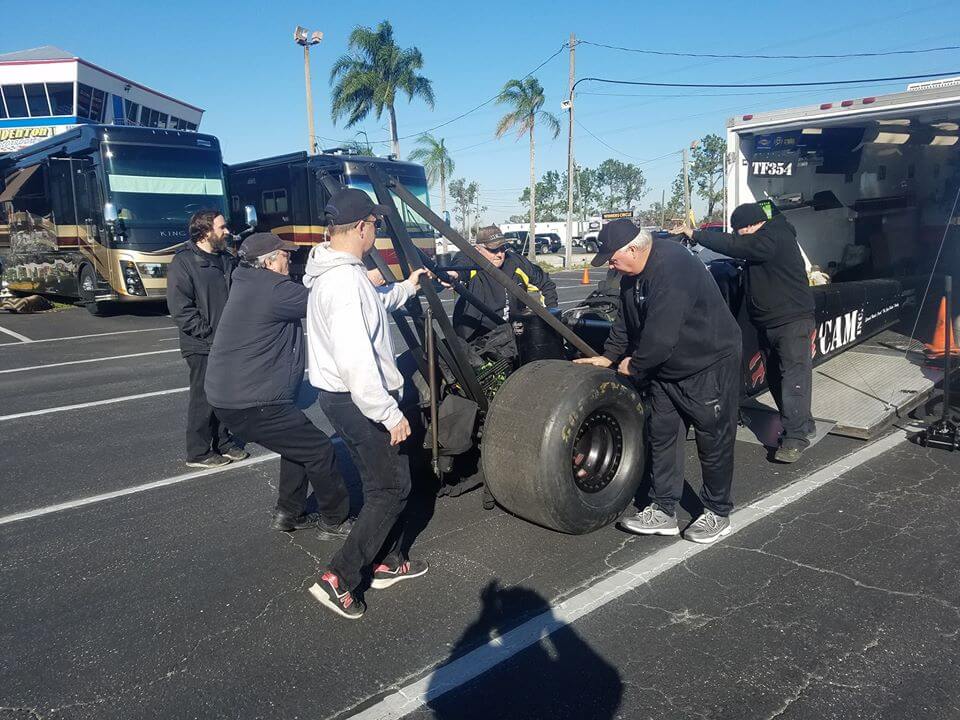 Anyone familiar with the old TV show or movie “Get Smart” knows the line, “Missed it by THAT much!” That sentence pretty much sums up our two test sessions so far. I’m disappointed but not discouraged. Even though I do not yet have my top fuel license (after launching the car 7 times) there are plenty of positive results to talk about. While it would be natural to assume that I would be learning a lot every run down the track (I am!), what really surprised me was how comfortable I became in the car almost instantly. I am a FIRM believer in mental rehearsal, and I have been “making practice runs” in my head daily to prepare for the real thing. This created a sense of familiarity and confidence right from the start. Don’t misunderstand me- I am not feeling foolishly overconfident, but I do feel great in the car and the team is VERY happy with my driving so far. Really, what has prevented me getting my top fuel license are a few gremlins, a bit of crazy cold weather, and a limited budget. 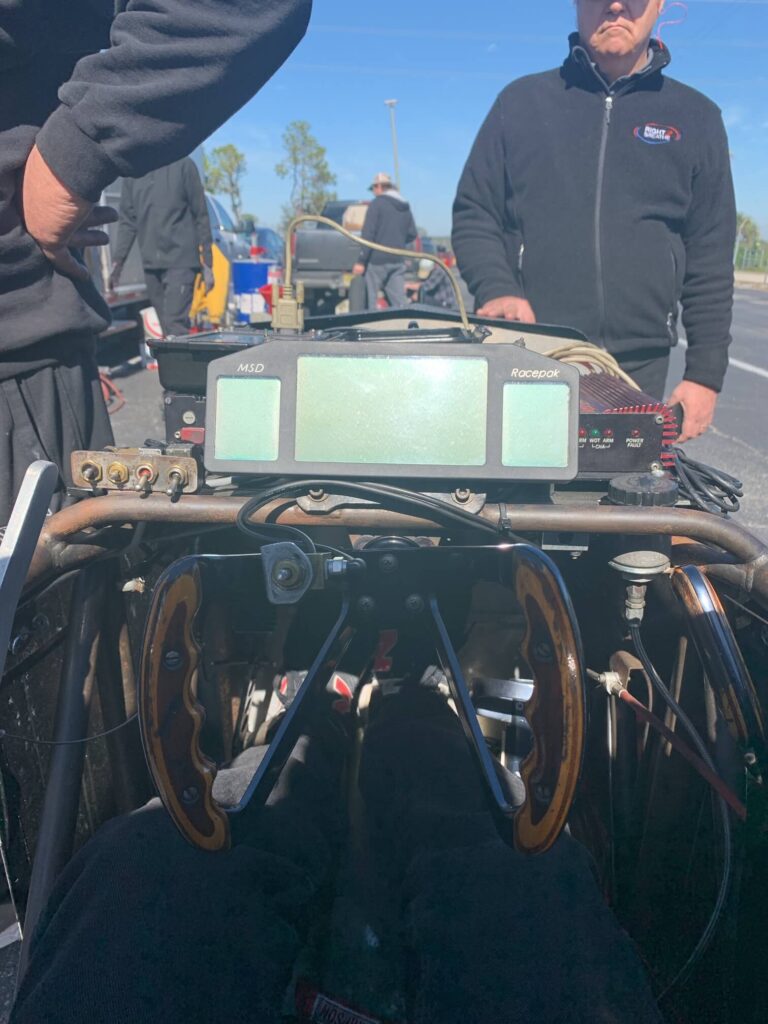 If anyone thinks that tuning a top fuel car is easy, think again! We had several mechanical challenges that prevented me from making the full runs I need. It seemed as if just as we got one problem solved, another one popped up. The funny thing is all these obstacles and challenges are helping me be prepared and confident for when I finally get to race. We had a range of issues: Tire smoke at the hit? Check. Got out of the throttle quickly enough to keep the rods in it! Stuck throttle on the burnout? Check. I maintained complete control of the car, got it stopped quickly and safely, and waited until instructed by Dan Leverich before shutting the car off in order to try to save the run. Tire Shake? Good Lord, yes, we had PLENTY of tire shake.

Our first trip to Bradenton Motorsports Park was on January 21 and 22. Todd Baroni and the team at Bradenton did an AMAZING job preparing the track to handle 10,000+ horsepower! The big problem was the weather. The wind was relentless and the high temperature only made it to 56 degrees! For our first hit, the cool air and excessive horsepower resulted in instant tire smoke when I hit the throttle after the tree came down. For the second attempt, we had an interesting situation on the burnout: As I wrote in the previous paragraph, the tail wind was so strong that it blew the vinyl tab into the injector which basically help the throttle part way open. Dan Leverich could not get the tab out of the injector without opening the throttle, so we decided to shut it down, refuel, and go for it again. This time, after a good burnout, I backed up, staged, launched the car only to have the automatic safety shutoff system malfunction and shut the engine off. On our last shot, Gary told me I could pedal it if it shook the tires. After a decent launch, the car did go into tire shake. I caught it quick, pedaled it, got it to recover, but it started dropping cylinders on the way down track and pushed out head gaskets on both sides of the engine and torched the heads. Bob Leverich gave me a great compliment on my pedal job, but we had a few things to fix before our next outing! The good news is, even after pedaling and having to kill the engine at 700’ (because it was eating itself alive!) I still ran a 4.55 ET at a slowing 228 MPH at the finish line. More than good enough to count for the “moderate” pass required for my license upgrade.

After looking at the track’s calendar with Bradenton track manager Laurie Johnson, it was decided that we could make one shot Saturday 2/15 and as many runs Sunday 2/16 as we could get in between 11AM and 4 PM. My pass Saturday night ended up being pretty late. It was getting dark and the temperature was dropping. When I drove funny cars and fuel altereds I have always used a “fresh air” system where pressurized SCUBA air was plumbed into my helmet. While this is for safety reasons, one of the great benefits to the breathing air system is that is helps un-fog my glasses and helmet visor. Unfortunately, since there is no need for such a system on the Top Fuel car, when my visor AND glasses fogged up after pre-staging the car and lowering my visor, I had NO way to get it to clear up. I opened the visor a little, pulled the fuel on full, let out the clutch, staged, and hoped it would clear up. After hitting the throttle, I STILL could not see a thing, so I HAD to abort the run. What a disappointment! Of course, it’s better than doing something stupid and crashing the car, but I wanted that run so badly!

Sunday 2/16 began early as we were going to try to run the car 3 times before 4 PM. Not an easy task for an all-volunteer crew! Our first pass of the day resulted in tire shake at about 200 feet. Gary looked at the computer and said, “We better get aggressive with this tune up!” I was psyched and was hoping for a fast ride! The crew got the car turned around and we were ready to get after it. At this point, we needed our next two runs to be full passes. After a great burnout and launch- tire shake AGAIN! Gary told me not to pedal it because we wanted to be sure we didn’t hurt anything, so I made sure to follow his instructions. I knew we weren’t going to complete licensing that day, but we ALL wanted to get at least ONE full run. After looking at the computer Gary discovered that the ignition control box was not accepting the timing curve he was programming! At last, an answer to the tire shake dilemma! We were running a bit late, but Laurie, Todd, and the awesome team at Bradenton were kind enough to give us a few more minutes to pull up to the line. After a couple little issues, we fired the car hoping for success. Unfortunately, the car put 2 cylinders out right at the hit and we had to shut it off.

I am truly confident that Gary and the team will get the technical issues sorted out. On the positive side, I didn’t think I would be getting this much seat time before my first race and experience is NEVER a bad thing! The crew has done an AMAZING job with the car. I want to thank Matt Hanley for organizing the crew and being a GREAT leader. Mickey Majors and Dena Mashburn worked flawlessly and were great to spend time with. My friends Brian Gawlick, Bob Toth, Mike McCormick, Jack Armstrong, and Paul Gold (Goldy) worked hard and were absolute professionals. Russell Baker and Bob Leverich took care of the clutch while I was mixing nitro. I hope I didn’t accidentally leave anyone out because everyone there was critical to getting the job done. It was a great team building experience and I am so glad to be surrounded by such amazing people.

The real disappointment is this: it is almost impossible for me to make my debut at the Gatornationals as planned. We are putting together a plan that works for both me and the team. While this is a setback for sure, it will certainly not stop us. Looks like my first ever national event in Top Fuel could be running 4-wide at Z-Max Dragway in Charlotte. Funny thing is- that’s kind of “The Story of My Life”. Go Big or Go Home!