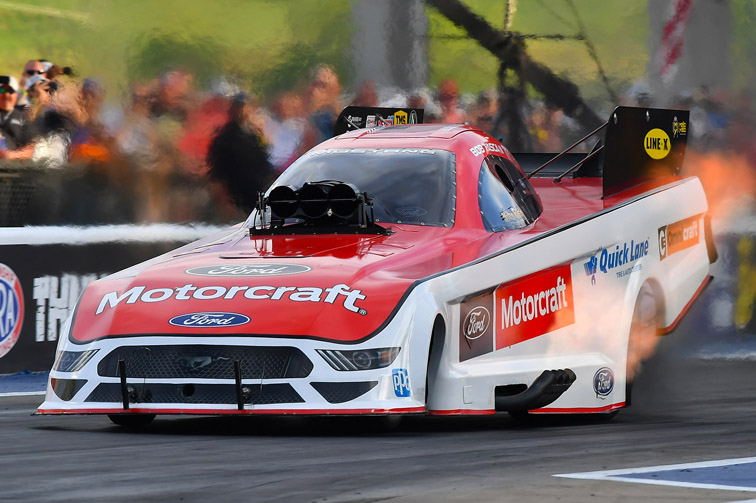 Until this past weekend, Bob Tasca III’s most recent NHRA Funny Car victory came in the fall of 2012 at Dallas Motorplex against Matt Hagan. That’s 100 races from Texas to Tennessee, where Tasca earned his fifth national Funny Car win in a Father’s Day final against 16-time category champ and No. 1 qualifier John Force. Racing in the 19th annual NHRA Thunder Valley Nationals at Bristol Dragway, Tasca took Ford’s first victory since returning 35 races ago to NHRA’s Mello Yello ranks with the Rhode Island native.

Tasca, whose family have been Ford dealers for generations, started the Father’s Day festivities with a takedown of Jim Campbell’s Jim Dunn Racing Dodge Charger, as his 2019 Ford Mustang made the fastest 1,000-foot pass of the first round of eliminations from Tasca’s third qualifying spot. In the second round he disposed of points leader Robert Hight’s Chevrolet Camaro SS with a low four-second pass, then beat two-time consecutive Bristol winner Ron Capps’ Dodge Charger SRT Hellcat in the semifinals.

In the finals against Force who, he said, taught Tasca everything he needed to know about wheeling an 11,000-horsepower Funny Car, Tasca had the edge from the hit and pulled away to claim his Wally winner’s trophy, denying the legend his 150th career win. Showing aggression all day long and having the support team of crew chiefs Eric Lane and Jon Schaffer (both of whom used to work for John Force Racing), Tasca emerged elated from his red-and-white Mustang.

“What an important win,” Tasca crowed. “This one means so much to me and the whole team. So much work has gone into getting this new Ford Mustang Funny Car into competition, and to win it here in Bristol is a big deal for us,” after finishing as runner-up to Capps at Bristol a year earlier. Tasca debuted the new Ford Mustang body (Ford’s first new body in a decade) in Pomona as the season got underway.

Moving from tenth to ninth in the point standings with his victory in the 11th contest of 2019, Tasca said it was “just a hard-fought effort. I knew it would be a slugfest against Force, but I love racing John. It was probably one of the biggest wins in my career. We had to build this car from scratch, but the chemistry on this team is good and I’ve never had a race car like this. It’s fast and the guys put me in a position to win. I love racing here,” Tasca admitted. “There’s so much history with my family racing in Thunder Valley and I really wanted to win this one. It was just a great day.”

Fellow Ford Mustang racer Tim Wilkerson is also using the new body, which is the first Ford race car built without the full-size prototype phase of development. This resulted in a process that had significant cost reduction implications for both road and race vehicle design. “It’s great to get the first win with the Mustang Funny Car,” said Mark Rushbrook, global director for Ford Performance Motorsports.

“There was a lot of thought and development  that went into the project and we could not have done it without the input from Bob and his team as we went through the process,” he said. “To get that first win against a legend like John Force makes it even more special. We look forward to this being the first of many wins for the new car.”