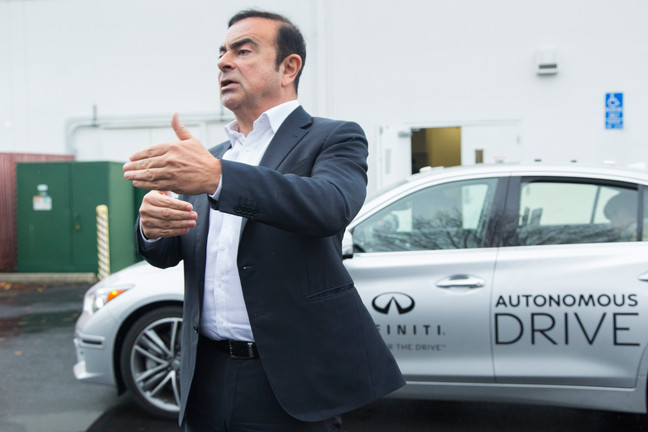 Carlos Ghosn’s meteoric rise in the automotive business is over. His plunge is just beginning, as he sits in a Japanese jail, arrested for fraudulent financial dealings, under-reporting his income while being the chairman of Nissan, Renault and Mitsubishi.

The French government, majority shareholder of Renault, has asked that company to provide additional details about compensation paid to Ghosn and other senior executives through the use of a Netherlands-based holding company jointly owned with Nissan.

French finance minister Bruno Le Maire made the demand after the CGT trade union voiced concerns about these payments. He wants to make sure the Renault board wasn’t in on the scheme, one that paid deferred salaries to Ghosn and some of his lieutenants.

Nissan’s findings against Ghosn, which are still unknown by the French finance ministry, have been shared with Renault’s attorneys. In December, Reuters revealed that executives from both Renault and Nissan had looked at legal ways to pay Ghosn undisclosed income through Renault-Nissan BV (RNBV) or other shared finances.

According to Ghosn’s son Anthony, 24, who has not been allowed to see his father since his arrest, the former executive has lost more than 20 pounds while in detention. He was seized after stepping off his private jet, arriving in Japan for scheduled meetings. He is being held in a small room, the son said, fed three bowls of rice daily and denied access to an attorney during his interrogations. He does not speak Japanese.

Talking with France’s Journal du Dimanche, Anthony Ghosn said his father’s attorney has not been able to see the prosecutor’s full case file. “From what I understand, in the Japanese system, when a person is held in detention, the prosecutor reveals little by little the elements that he has at his disposal.” Ghosn is permitted to share these details with his lawyers.

Ghosn is expected to make his first public appearance this Tuesday, January 8, since his November 19 arrest. He is expected to appear in a Tokyo court after requesting an open hearing for an explanation on his continued detention.

Carlos Ghosn is expected to be seen in prison attire and be handcuffed, his son said. “For the first time, he will be able to answer the allegations against him, to give his version of events,” his son said. Anthony Ghosn believes Japanese prosecutors want his father to sign a confession.

Carlos Ghosn’s arrest has brought a sharp divide between Renault and Nissan, one that could harm both companies, should they not be able to find common ground. Their alliance has been ongoing for 20 years and is strained by these allegations. There was a recent single meeting between Hiroto Saikawa, who took over the reins at Nissan after Ghosn was arrested and Renault’s Thierry Bollore, now Renault’s deputy CEO. The talks were, Saikawa said, “positive and productive.”

Ghosn’s trial, expected sometime this year, focuses on the accusation he underreported $43.5 million in deferred compensation, which was funneled through RNBV. Additional accusations state he shifted about $17 million in personal swap contracted losses to Nissan and had the company pay $14.7 million to a business associate who, authorities allege, helped Ghosn handle the flow of red ink. The compensation, initially issued in Japanese yen, devalued as that currency rose against the US dollar.