Birmingham, AL – Every 24 Hours of LeMons race, Jay and Nick recap the high points and ridiculousness that went on the previous weekend. Here’s some overdue footage from the ‘Shine Country Classic at Barber Motorsports Park from February 7-8, 2015.

With an opening stab at auto journalists, the co-hosts praised the Grassroots Motorsports’ Miata that maintained Top 10 – surprisingly well, “for automotive journalism.”

This weekend welcomed two Pintos. Shockingly, Judge Phil reported that “they didn’t do much, other than be pintos.”

LeMons has reportedly only seen two Triumph Spitfires and this weekend the second was tapped by a Neon, who spun off and didn’t finish, but left the damn Spitfire unscathed.

#46, a Dodge Daytona did a send up of the Dodge International Star Challenge, a ripoff of the Long Beach Celebrity Grand Prix, where a bunch of lesser known celebrities drive around the Long Beach track in Toyota Celicas. The Lemons Dodge was driven by the heavy metal singer, Don Dokken. In the words of Phil, they “did some laps” and “cooked the brakes – it broke some stuff.” Sounds like Lemons to us.

The NSF team brought a Studebaker Silverhawk, which had been sitting in a swamp in Florida since 1984. Needless to say, without over $500 of work, there were Fuel line problems, with numerous times it was towed off the track. However, with an alleged 37 fuel filters to get the chunks out, they got it working by Sunday and took home the Index of Effort. 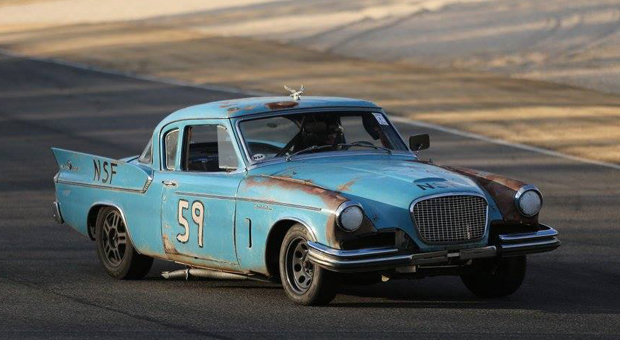 In a rather unfortunate event, the 1964 Ford Fairlane engine blew up motor and the team had to hunt down a new one. They ended up purchasing one from an odd Nazi compound in Alabama. It didn’t run. The Fairlane took home the “I got screwed by the Nazi Junkyard” trophy.

The Organizer’s Choice was given to the Knoxvegas Lowballers, with their mid-engine Metro, a Sable and a twin engine Mazda MPV mini van. They had a Super Groovy ’70s theme with the two cars and hit it right on the nose. 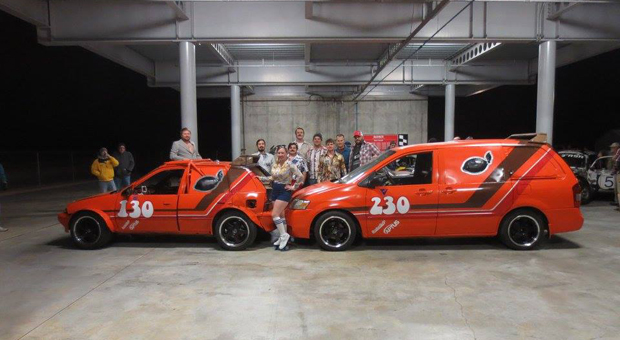 Morrow’s Racing went for recreating the Pontiac Banshee concept car, complete with John DeLorean being busted by the Feds for drug possession. The concept car had a BMW chassis and the real 6cyl engine with overhead cam and an opal GT body.

Taking after a local commercial for Victory Auto Wreckers, Phil decided to make everyone recreate the ad as a penalty.

A Lemons weekend wouldn’t be complete with something extra out of the ordinary. One guy showed up with an expired license, then drove 800 miles to Illinios and back, just to race. Now there’s dedication.

Next race is this weekend, Sears Pointless in Sonoma, California. Click here for details.

View all the photos from the event here.