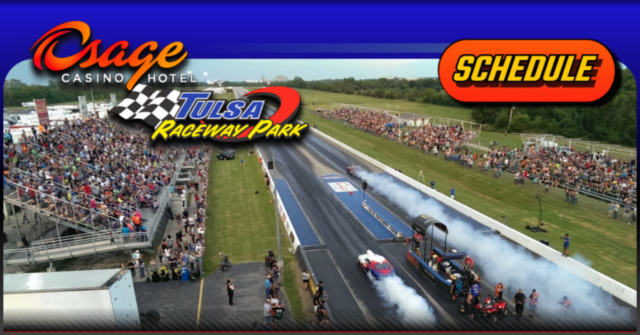 The Throw Down in T-Town is legendary for the simple fact that it’s a drag race by racers for racers. Throw Down fans have had a tough 2020 and have been salivating for some live in-person racing.
Throw Down of 2021 will be held at Osage Casino Hotel Tulsa Raceway Park on May 7th-8th and will feature some of the top racers in the United States competing in 12 classes.
“The Throw Down in T-Town has become one of the largest races in the country,” track co-owner Keith Haney said. “We had over 175 race cars in October 2020. It’s a FREE event for the customer, we were limited on how many fans we could have in October but ended up around 20,000 fans in the stands for the weekend which was half of what we normally have but we were blessed to have any during this pandemic. It’s just become a huge event.”
What is even bigger is having the Summit Racing Equipment Mid-West Drag Racing Series! The MWDRS had to cancel one event and postpone the first event for the year due to the COVID-19 virus but have been lucky enough to run their full schedule and the best part is this is their 2nd Stop on the Mid West Tour and there are a lot of newcomers to the series and this race.
The fastest door-slammers in the world will be racing at the Throw Down, which will feature Mid-West Drag Racing Series. Both MWDRS & Slammer categories will feature 16 car fields…with as much as $10,000 to win! MWDRS added in 2020 these NEW Classes “Funny Cars” which these guys and gals are all fighting to win a Championship! They have also added a Big Tire Outlaw N/T Class. Tulsa will also feature the all popular classes Pro-Street, Outlaw Gassers, Jr Pro1, Jr Pro2 and added for this race Super Pro, 6.0 Index and foot brake classes.
“Some of these racers drive 2,500 miles just to race in front of a huge crowd, but if for some reason they don’t get in the show, they still have a chance to race,” Haney said.
That’s part of the draw, the race has drivers and teams across the country, as Haney and co-owner Todd Martin know how to put on a show.
“It’s an absolute blast,” Haney said. “The fans interact here like no other. The interaction is amazing and totally off the wall. Most drag racers want to race in front of a big audience.