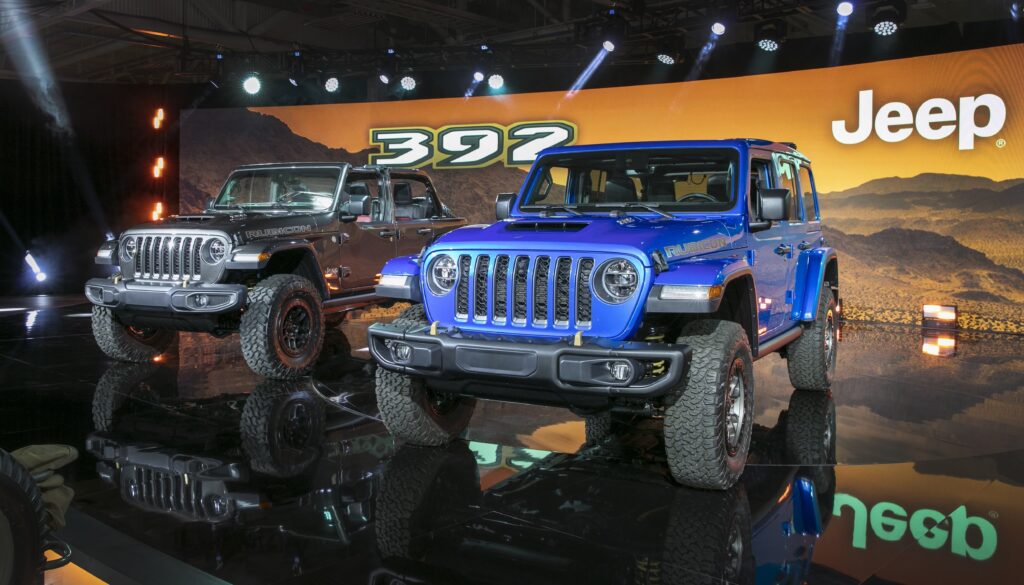 Delivering 470 horsepower and 470 lb.-ft. of torque and running 0-60 in 4.5 seconds, the V-8 Wrangler Rubicon is designed to nimbly maneuver between off-road and street functionality (and drive through great big puddles, or as some people call them, streams — it can traverse water up to 32.5 inches).

The Wrangler Rubicon retains the Jeep styling that enthusiasts rally around, as well as the wow-factor in the driveline — the Selec-Trac transfer case has four driver-selectable modes: 4WD Auto, 4WD High, Neutral and 4WD Low

The heart of the driveline is a Selec-Trac full-time, active transfer case with a 2.72 low-range gear ratio. The transfer case has four driver-selectable modes: 4WD Auto, 4WD High, Neutral and 4WD Low and allows the driver to set it and forget it, while constantly sending power to the front and rear wheels. It also allows for Wrangler Rubicon 392 to be flat-towed.

The Off-road Plus with Sand and Rock modes adjust throttle, transmission shift points and traction control high speed runs on sand, as well as during low-speed rock crawling, and the drive mode lets drivers lock the rear axle at high speeds while in “4H.” In “4L,” Selec-Speed Control manages vehicle speed off-road terrain without requiring throttle or brake input and can be adjusted from 1-5 mph simply by using the Electronic Range Select shift control.

“This is the most powerful, quickest, most capable Jeep Wrangler we’ve ever built,” said Jim Morrison, Head of Jeep Brand – FCA North America. “The factory lift and abundant low-end torque from the V-8 makes the Rubicon 392 the king of the hills, whether you’re rock crawling at low speeds or powering up an incline. And, when pavement replaces dirt, Rubicon 392 makes quick work of the road.”

As a bid to show the Bronco who the REAL trail boss is, the Jeep Wrangler Rubicon 392 is not a bad play.