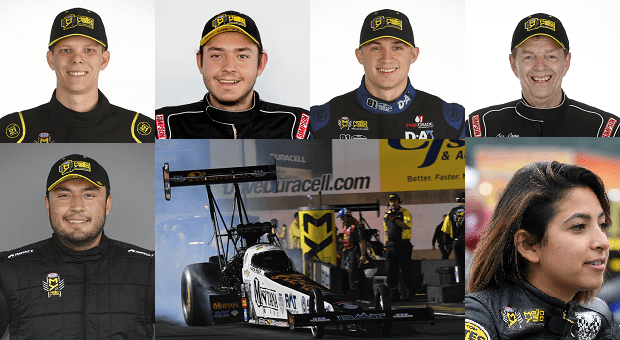 Every year, NHRA celebrates a newcomer to the Mello Yello Drag Racing Series. The Auto Club Road to the Future award is the means of designating a rookie of the year for drivers participating in Top Fuel, Funny Car, Pro Stock and/or Pro Stock Motorcycle. Sometimes the choices are minimal; occasionally there’s a large class of newcomers among which to choose.

A large class is eligible in 2019, with seven candidates vying for this vaunted prize. In many cases, awardees have gone on to claim national championships, as was the case for Tanner Gray, 2018’s Pro Stock champion; Brittany Force, 2017 Top Fuel titleholder; and LE Tonglet, who managed to secure both the Auto Club Road to the Future and Pro Stock Motorcycle title in his 2010 championship year.

The winner will receive a $20,000 prize and a trophy during NHRA’s annual championship awards ceremony, held the day after racing in the Auto Club NHRA Finals, held at historic Auto Club Raceway at Pomona. The ceremony takes place on November 18th.

The criteria for selection includes the number of events contested, performance on and off the racetrack, participation in NHRA promotions and relationships with fans, sponsors and media. A selection of leading racing journalists are tasked with selecting the winner.

Top Fuel candidate Austin Prock, of John Force Racing, earned a single win at Brainerd earlier this season and has raced every event after a late entry that was enhanced by backing from legend Don Prudhomme.

Jordan Vandergriff of Bob Vandergriff Racing, who has not raced every contest on the 24-race schedule, was the runner-up in Texas just a week ago.

Dutchman Lex Joon moved from his European FIA Top Fuel championship to take on American competition, contesting a few races a year until 2019, when he has attempted to qualify for all 24 contests on the docket.

While Cristian drives a Ford Mustang, the other Cuadras, Fernando and son Fernando Jr., race Chevrolet Camaros in the class. The patriarch, who owns wildly successful Corral Boots, was away from drag racing after having to rebuild his business after losing factories from weather-affected calamities. He came back to the sport in 2018 and brought his sons along this year.

Jianna Salinas, too, is the product of a racing family. Her father Mike is a vital part of the Top Fuel Countdown to the Championship six-race playoff series. While Jianna hadn’t raced in Pro Stock Motorcycle until the 2019 campaign, she is getting her seasoning as the 16-contest season progresses. She has qualified for some races and won rounds in her rookie year.

Voters have until the end of the month to cast their ballots before the final two races of the season, next weekend’s Dodge NHRA Nationals on The Strip at Las Vegas Motor Speedway and the Auto Club NHRA Finals at Auto Club Raceway in Pomona, two weeks hence.