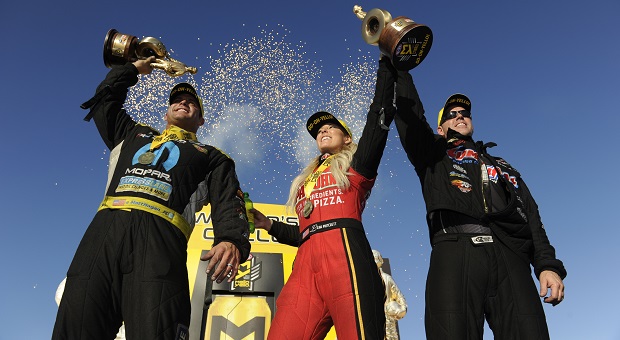 It was a clean sweep at the season-opening Circle K NHRA Winternationals, with all the No. 1 qualifiers taking wins at the famed California dragstrip.  In Top Fuel, Leah Pritchett won in her nearby backyard of Redlands and first time at Pomona.  Matt Hagan dedicated his Funny Car win to his brother, who he lost last month, and Jason Line sped away from teammate Greg Anderson in the Pro Stock category to start his season off the same way he did last year, adding another Wally to his trophy case. 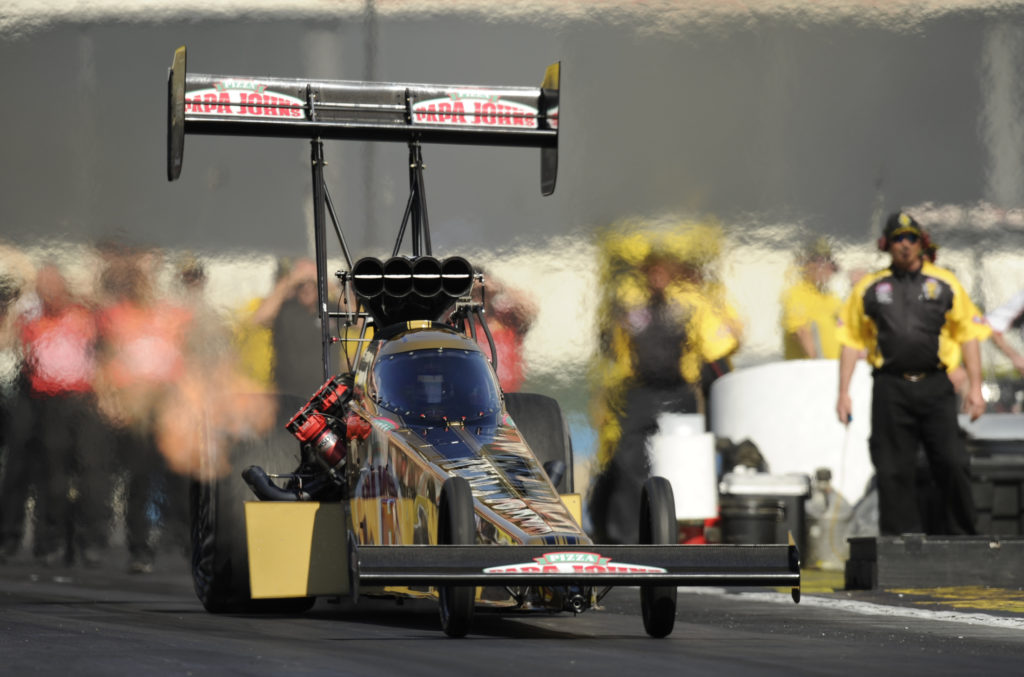 Leah Pritchett made it perfectly clear that her preseason testing wasn’t a fluke, handing her competition four losing time slips on Sunday with unbeatable runs on race day and a near national record in qualifying.

Rain hampered qualifying in the class to only three sessions. Pritchett lit up the scoreboard, taking the No. 1 qualifier and missing the record by just a thousandth of a second, blasting to a time of 3.672 seconds to set the low ET of the meet and giving her sponsor, Papa Johns, the declaration of ‘World’s Fastest Pizza Delivery.’

Pritchett started her race elimination day with a bye run and then moved on to defeat Steve Torrence and eight-time champion Tony Schumacher en route to the finals, where she beat Doug Kalitta with a time of 3.711 seconds, 324.98 mph after he lost traction on the hit and spun the tires.

“This definitely is taking delivery from the momentum from last year,” said Pritchett, who at 8 years old drove a Jr. Dragster at Pomona. “What just happened is the best thing that has ever happened for me in my career.  In my opinion, right now, we have the perfect group of people, partners, sponsors and a car that is reacting.  This thing is A-plus, Grade A, perfect kid in school type of situation and we’re taking advantage of it right now.” 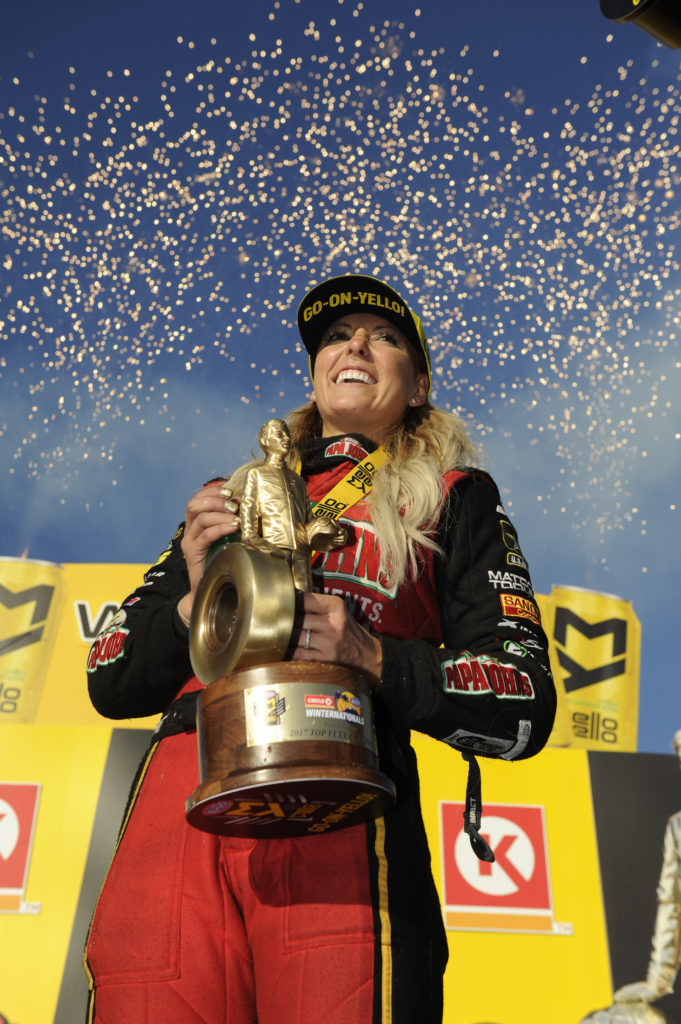 Pritchett, with crew chief Todd Okuhara and assistant Joe Barlam, is starting her first full season with DSR after joining the juggernaut midway through last year and driving in 15 of 24 events.  It was quite a homecoming for the 28-year-old, who grew up in nearby Redlands, Calif. and graduated from Cal State San Bernardino.

“You’ve got to have confidence if you’re going to run one of these beasts, and confidence is contagious,” said Pritchett, who won her second race in her career after winning in Phoenix last year.  “Todd and Joe have confidence in the car and that’s contagious to me as a driver and our whole Papa John’s team.  That’s how we’re gelling so well.”

With her season-opening win, Pritchett now leads the Top Fuel points with 122, leading by 17 points over Doug Kalitta, followed by Antron Brown, Tony Schumacher and Brittany Force rounding out the top five. 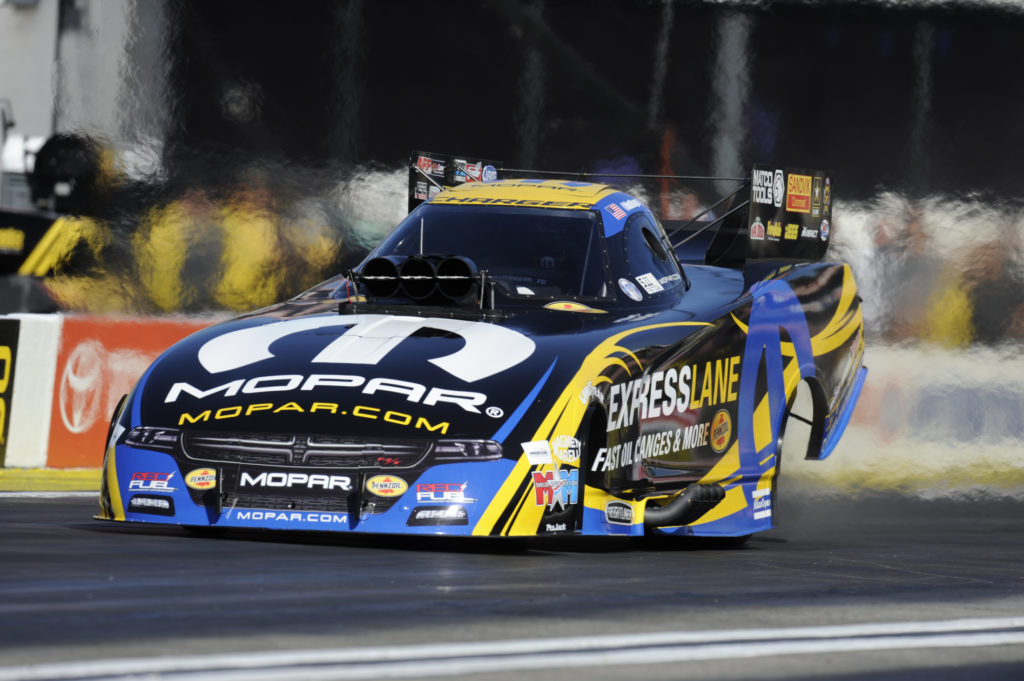 For the Mopar Express Lane Funny Car team driven by Matt Hagan, it was ‘game on’ as he lead his class all weekend, tying his own NHRA National record in time and speed with his No. 1 qualifying time of 3.822 seconds, 335.57 mph at the Auto Club Raceway at Pomona.

Hagan drove on behalf of the memory of his brother, whom he lost last month, with a passion to honor him – and did he ever deliver on race day.

“It’s just a real special race for me,” Hagan said.  “A lot of stuff happened over the offseason with losing my brother and I’m just coming out motivated.  My lights have been great, the car is running great and we’ve just got a real powerhouse team right now.”

The team followed up their Saturday qualifying performance with four round wins on Sunday, knocking off Jeff Diehl, DSR teammate Jack Beckman and defending Funny Car world champion and teammate Ron Capps in the semifinal and Courtney Force in the final round.  It was Hagan’s 23rd win running a time of 3.875 seconds, 330.07 mph to Force’s time of 3.901 seconds. 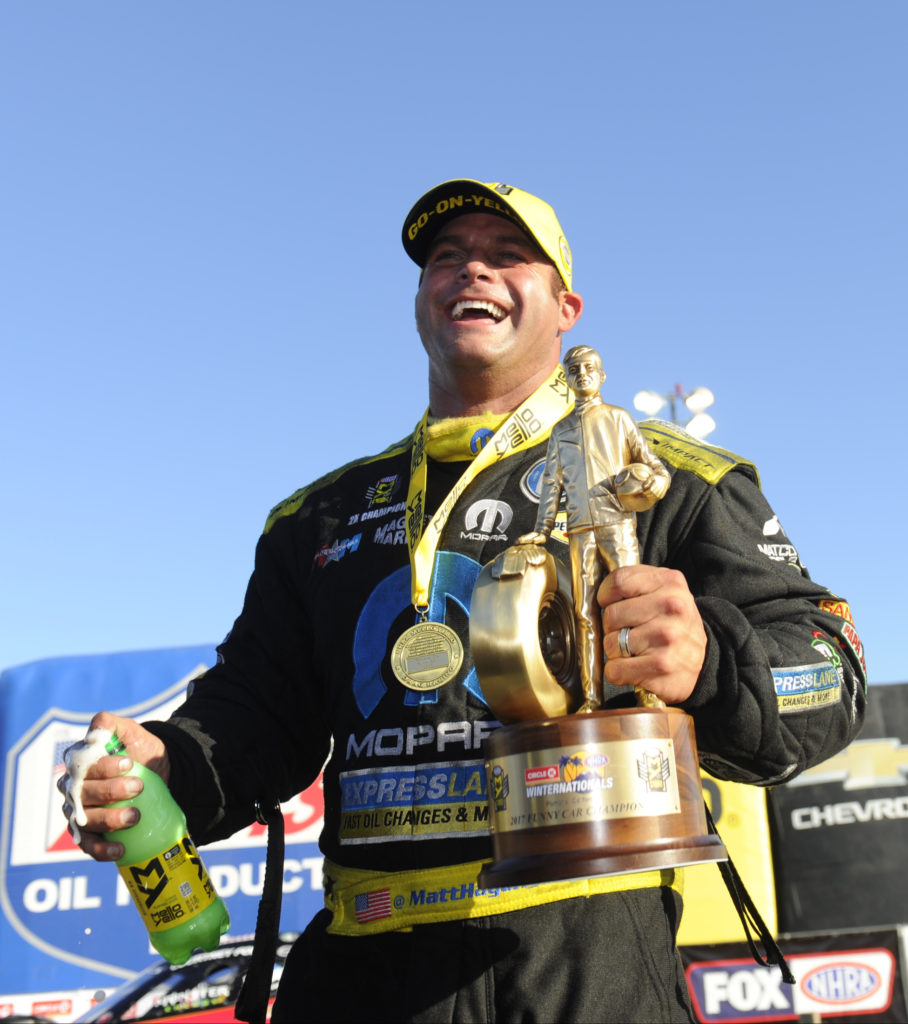 “I’ve got to say thank you to Don Schumacher,” Hagan said.  “There’s a line of drivers that would sit in that car and take my job tomorrow.  But he keeps me in the car and I just try to do a good job for him.  We have a great team around us right now.  I’m just excited.  Anytime we can put those Forces on the trailer that’s what we need to do.  We’re here to win and Don expects us to win.  We just need to keep that going.”

Runner-up Courtney Force led the category in preseason testing and is producing a competitive race car this season.

“We had a solid first outing here,” Force said.  “Obviously, it’s the kickoff to the 2017 NHRA season here at the Winternationals, our home track.  We came right off of testing and continued the momentum over here in Pomona.  We’re really excited.  Our team is performing well, our Chevy Camaro is running fast and these guys did an amazing job.” 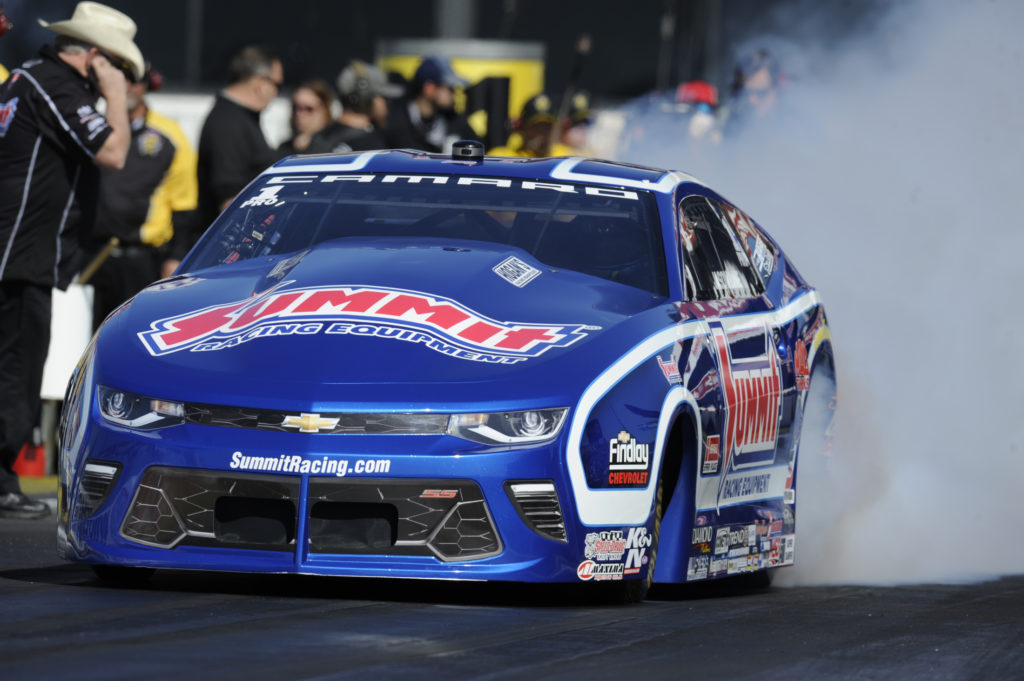 The mighty Pro Stock power of Ken Black racing still seems to have a solid grasp around the competition in 2017, with Jason Line again dominating the Winternationals and beating his Summit Racing teammate Greg Anderson in the finals.

The three-time champ, Line beat Val Smeland, rookie Tanner Gray and KB racing teammate Bo Butner before he used a .005-reaction time against Anderson to turn the tables his way, running a time of 6.568 seconds, 211.10 mph to his opponent’s near identical elapsed time of 6.579 seconds, 211.56 mph.

“You know you have to be close to perfect on the tree or else you’re not going to beat him,” said Line, claiming his 46th victory  “I know how much power he has; he’s got the same stuff I have, so it’s really who lets their foot off the clutch first.  That is a lot of pressure as a driver, which I don’t like.  But today I was able to do a good job and get it done.  It was a fun final round with our Summit Racing Chevy Camaros, but if there’s one person I don’t want to race in the final, it’s him.  He wants to win more than any person I’ve ever met in my life.  He’s very driven, very motivated.  If I’m hiring a racecar driver, he’s my guy.”

On Sunday in Pomona, Line had low elapsed time of every round of eliminations, showing KB Racing had clearly done their homework over the off-season. Despite this, Line assumed nothing coming into the first race of the year.

“No matter what, I always feel like we’re behind,” said Line.  “But I think it’s a good way to stay motivated.  The rest of this season is going to be more like it was in the carburetor days.  The package has tightened up considerably, and these are naturally aspirated engines so the devil is in the details.  Whoever does the best job of tuning the chassis and engine is going to be the winner or have the fastest car.” 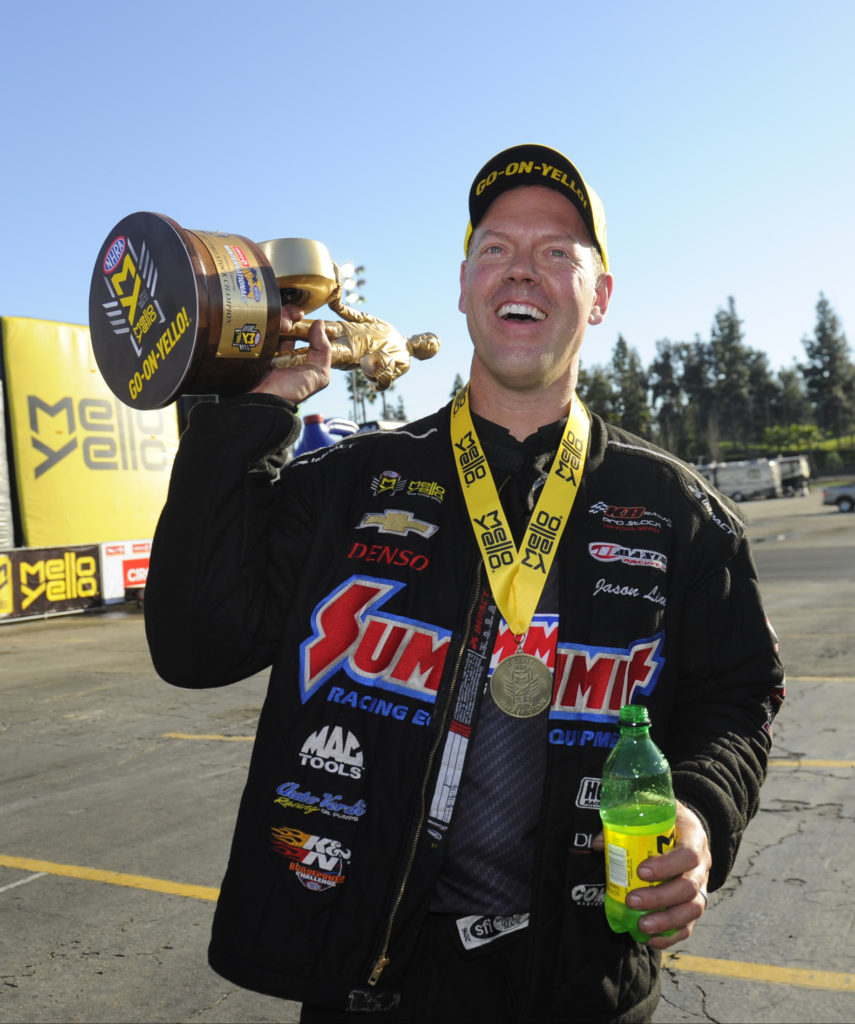 The final would be the 35th time that he and Line would race one another for the Pro Stock Wally, and Anderson held a tidy advantage over his teammate with a 19-15 win-loss record in final round face-offs.

“I’m very happy, but it wasn’t as easy as it sounds,” said four-time NHRA Pro Stock world champion Anderson.  “It turned out great, but let me tell you: after the first qualifying run, we thought we were going to have our hands full.

Line starts the season in first place in the Mello Yello Pro Stock points with 126 points, with Anderson right behind with 103 followed by Bo Butner, a resurgent Erica Enders and Vincent Nobile in fifth.