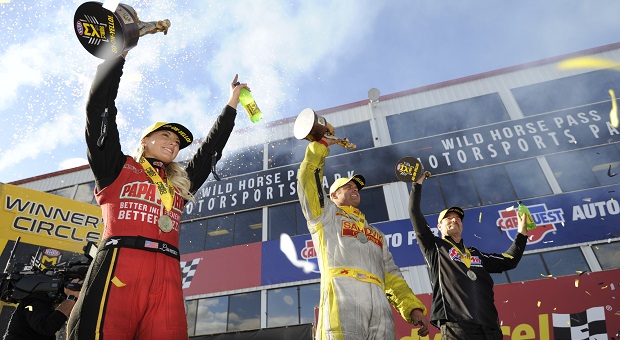 Car owner Don Schumacher has to be beaming with pride. Two of his nitro race teams are undefeated in 2017.  Leah Pritchett is still riding a Top Fuel high after winning the season-opener at Pomona, and on Sunday, she defended her title at the 33rd annual Arizona Nationals in Phoenix.  Matt Hagan, like his DSR teammate, is now 8-0 in Funny Car competition, starting the season unbeaten in his Dodge Charger, just like last year.  KB Racing won again in Pro Stock, only this time it was Greg Anderson taking his Chevrolet to victory to earn his 87th National event win. 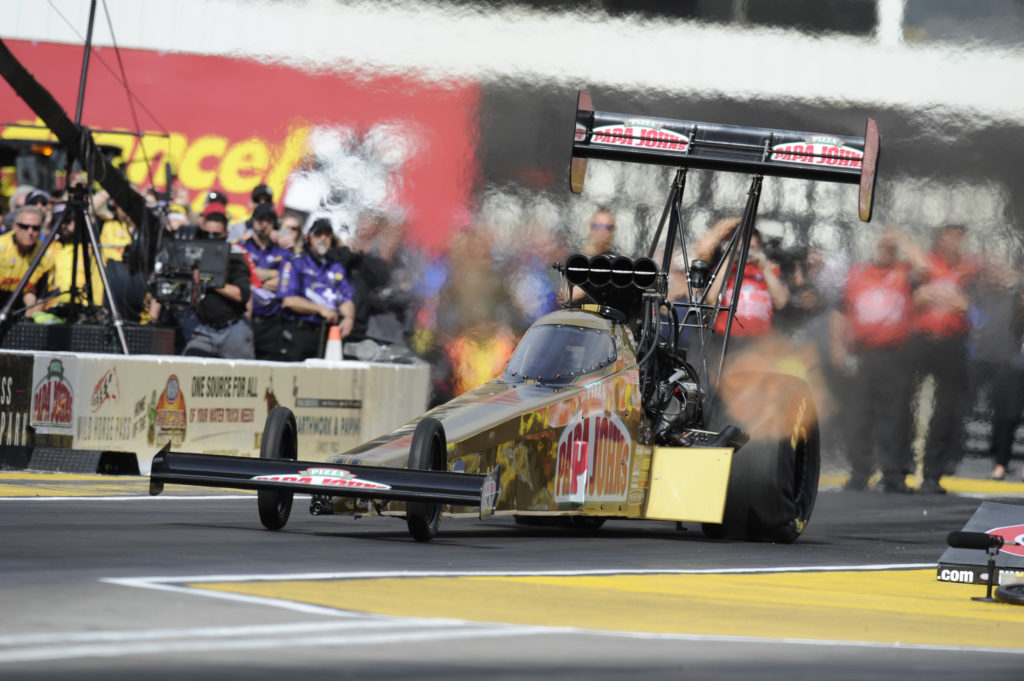 The Papa John’s Pizza Top Fuel dragster, driven by Leah Pritchett, stays unbeaten so far in 2017 with her victory over Brittany Force at the NHRA Arizona Nationals in a rematch of last year’s race.

In only the third all-female Top Fuel final in the history of the sport, Pritchett had a bye run first round and defeated Clay Millican, Shawn Reed and Force in the finals on a narrow holeshot after running a time of 3.705 seconds, to Force’s barely quicker time of 3.704 seconds for Pritchett’s third win of her young career.  Winning the first two races of the season ties her with Gary Scelzi in 1997 as the other driver to complete the feat.

“Honestly, I’m trying to keep up with my team for how well they’re doing and make them proud of me as a driver and do the job that is expected of a Don Schumacher Racing team,” she said.  “We’re blessed with the equipment, the talent, the capabilities of the people and everyone it takes to (win).  So I’m happy that I could hold up my end of the bargain.

“I’d like to be capped off on a confidence level because this sport is extremely humbling and it can turn at any moment.  I like the confidence that we have right now because it’s not too high.  We’re double-checking each other’s work in a very positive way.  The thing I’m most impressed about is how well our team is working together and how much we enjoy working together.” 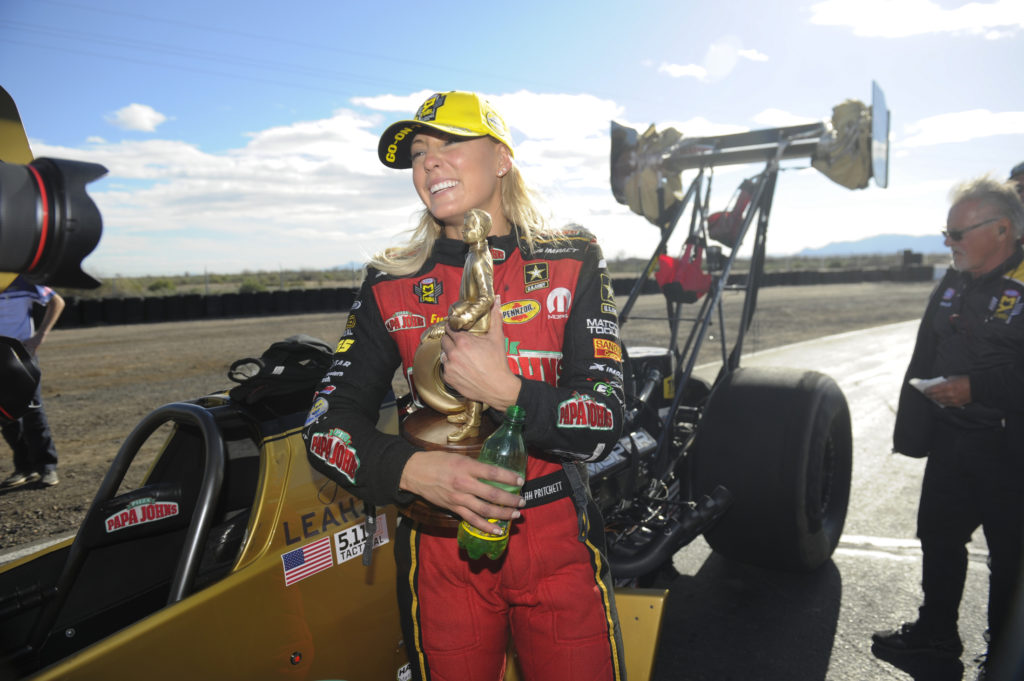 On Friday, to add to her star-studded weekend, Pritchett set the NHRA world record with an elapsed time of 3.658 seconds in qualifying, matching her preseason testing marks as the quickest ever.

After two races of 24, Pritchett lengthened her lead in the points to 92 over to Tony Schumacher, with Brittany Force, Antron Brown and Doug Kalitta taking the top five spots. 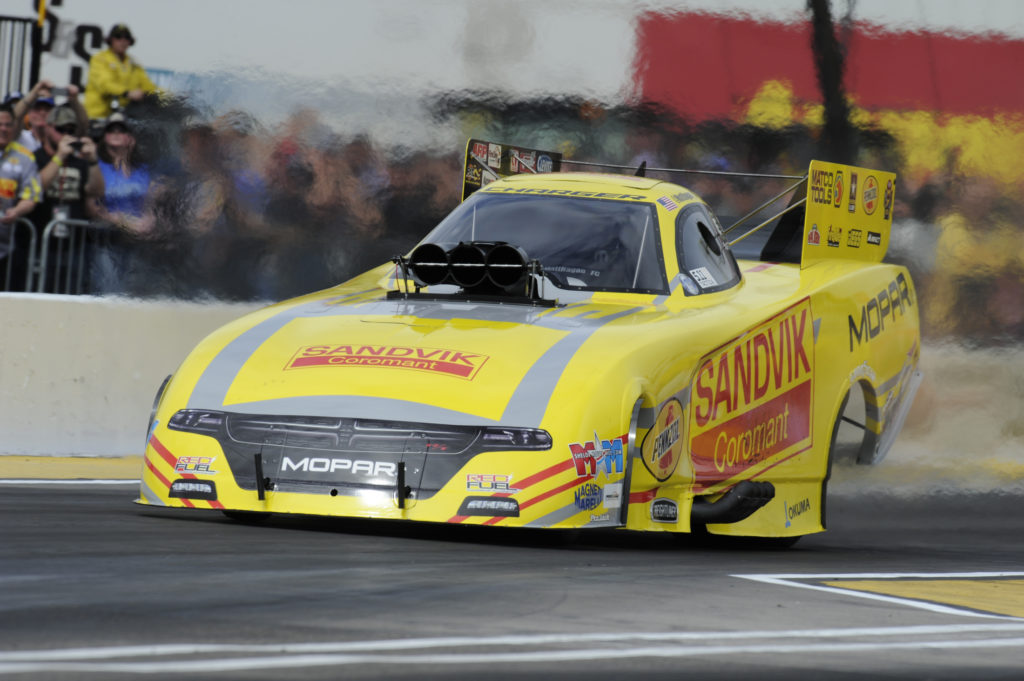 Matt Hagan is starting the season exactly the same way he did in 2016 – with two consecutive wins, taking his Sandvik Coromant/Mopar Funny Car back to victory lane after setting the low ET of the meet and dominating the race.

“This is just great, man, we’ve got us a hot rod right now, the car is running strong,” said Hagan, the 2011 and 2014 Funny Car world champion and world record-holder for elapsed time and speed.

“Dickie Venables is killing it out there and the car’s just going down the racetrack every lap.  He is putting a real car underneath me and my lights are on point right now.  I’m just feeling it; feeling this racecar, this race team.  We’re just digging.  Everybody’s working hard.” 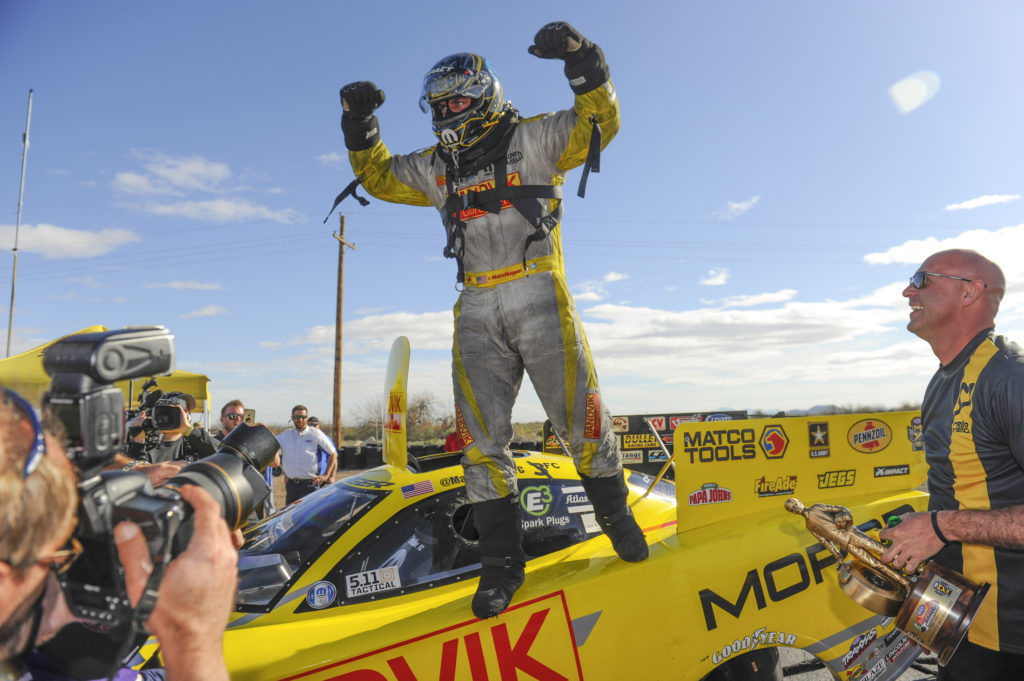 The 24-time Funny Car winner marched through Sunday’s eliminations, taking down Cruz Pedregon, Tim Wilkerson on a hole shot, and then his two DSR teammates of Tommy Johnson, Jr., in the semis and Ron Capps in the finals.  Hagan reacted first, leaving on Capps (.057-.075) and reaching the finish line first, running a time of 3.878 seconds, 330.88 mph to Capps’ time of 3.883 seconds, 330.88 mph.

He extended his points lead further with his second win of the season, now distancing himself from Ron Capps by 62 and 100 over Courtney Force, followed by Tommy Johnson, Jr. and John Force in fifth. 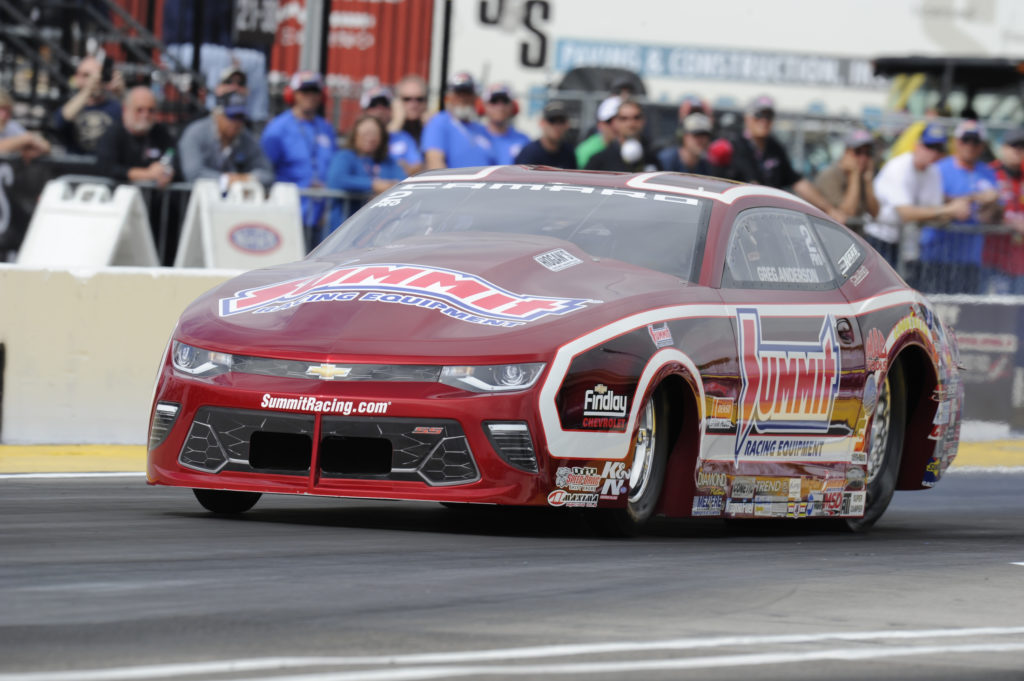 KB Racing is starting out gangbusters again in 2017, and until someone in the Pro Stock category can stop Greg Anderson and Jason Line, it looks like a repeat of last year’s dominion in the class.

At the Wild Horse Pass Motorsports Park in the Valley of the Sun, the KB team showed everyone they are still the team to beat, with Anderson winning on Sunday for the 87th time. He’s quickly becoming historic, now trailing Warren Johnson by 10 races to surpass him in overall wins.

“It was a brutal day, but I knew it was going to be,” said Anderson, who was a finalist for the third consecutive event, including the 2016 NHRA Finals and this season’s Winternationals.  “This class is awesome and as strong as it ever was.  I think every race I had today was decided by less than a foot – you just can’t get better racing out there.  It’s a battle royal every time you stage the car, and anybody can win.”

Anderson drove to his 141st finals after beating Kenny Delco, Shane Gray on a small holeshot, and his son Tanner in the semi-finals before meeting Drew Skillman in the money round. 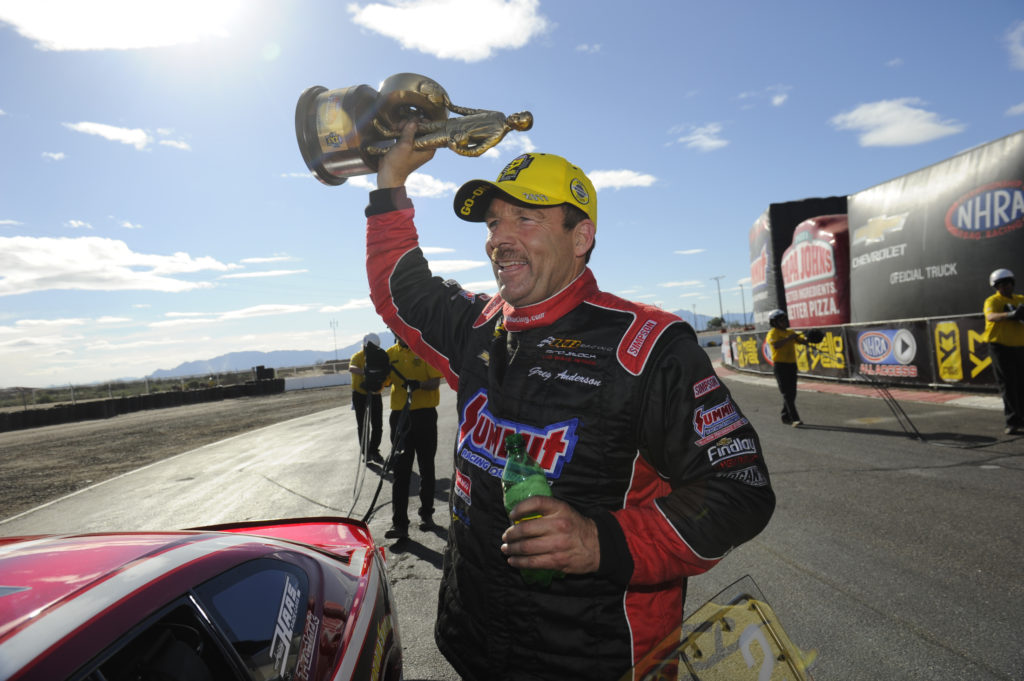