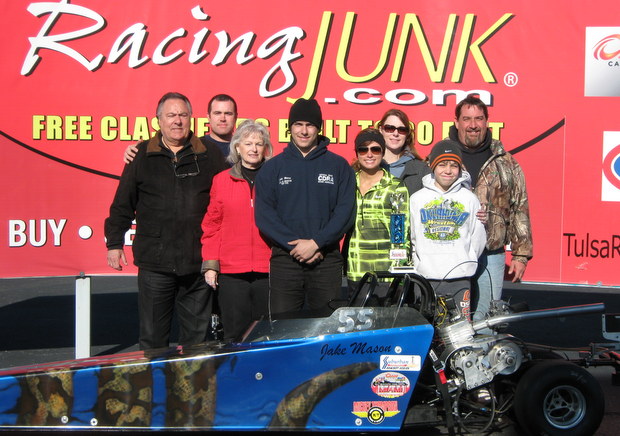 Thanks to Keith Haney & Todd Martin, owners of Tulsa Raceway, and to bracket managers Jimmy Boles, David Woods and Randy Hale for keeping us up to date on the race winners!

The 2014 Suburban Chevrolet bracket series kicked off the season with a lot of good racing action. The rain rolled in Saturday evening and postponed race number one until Sunday. The weather Sunday was a little cool but everyone was enjoying some great races.

In the Super Pro class on Saturday, the final came down to two door cars, Gordon Laster taking on Steve Scott. It was a good race with Gordon coming out on top. Sunday’s Super Pro final came down to the young gun Chase Stookey taking on the veteran Lanny Maples. With a little better light, Chase was able to take the win over Lanny.

In the No Electronics class final, Dunn Henderson took on Curtis Reed. Dunn, who had been running great all day, broke just off the line. Curtis had the better light and never looked back to take the win. The Junior Pro class Saturday was an all-girls final with Allison Wood taking on Courtney Langley. Allison had a couple of perfect lights throughout the day and took the win.

The Junior Pro class on Sunday was an all-boys final with Jake Mason taking on Wyatt Bachtell. With this being Wyatt’s first race coming up from the junior sportsman class, he just couldn’t hold off Jake who showed the upcoming kid, this is my class to win. In the Junior Sportsman class it came down to the same young girls in both Saturday and Sunday finals. Kaylee Shepherd took on Makenzie Wiegers. Kaylee took the win both days.

In Sunday’s final it came down to Josh Pilcher taking on Ricky Martin with Josh taking the win. With all the winners being crowned for the first weekend’s races everyone can’t wait until races 3 & 4, April 12th and 13th, with the Juniors racing for an NHRA Wally on Saturday.