This weekend marks the 50th anniversary of the Auto Club NHRA Finals at the Auto Club Raceway at Pomona, which is the last race every season. So many championships have been decided and some of the finishes have become instant classics in NHRA’s long legacy.

Everyone remembers the 2006 race, when Tony Schumacher made ‘The Run’ to overcome a tremendous points deficit to win that Top Fuel title over Doug Kalitta.

But we can also look further back, to the 1990 Winston Select NHRA Finals, which would surprise everyone with a  winner takes all heartstopper.

1989 Top Fuel champion, Gary Ormsby was out to defend his title against  opponent, Joe Amato who was shooting for his third Top Fuel championship ring.  Ormsby had won six races and Amato five going into the 1990 finals.

The season was comprised of 18 races over nine months, and going into the finals, each driver had won 43 rounds of racing.  At that time, a round was worth 200 points and low ET of the race was an additional 50 bonus points. Amato had a 254 point lead when qualifying started on Thursday.

Amato’s Valvoline team was lead by ‘The General’ Tim Richards, and Ormsby had Lee Beard behind the wrenches of his Castrol Top Fueler. 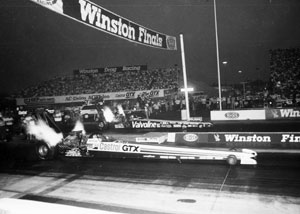 After qualifying was completed on Saturday, Ormsby had set Low ET of 5.01 seconds, grabbing the No. 1 qualifier along with the valuable 50 points, out-qualifying Amato by two spots. This left Amato to enter the race third, giving Ormsby the extra four qualifying points to leave an even 200 points, or one round of eliminations, separating the two.  Ormsby needed to go one more round than Amato and hold on to low elapsed time throughout race day to win the title and if he won, his six wins would be the tie-breaker.

In the quarterfinals, Ormsby had to race Don ‘The Snake’ Prudhomme and Amato had to race Eddie Hill.  On the same side of Amato’s ladder were Gene Snow and a then 22-year old Tommy Johnson, Jr.   On the Ormsby side was Kenny Bernstein vs. 25-year old Lori Johns.

Snow defeated Johnson, Jr. 5.21 ET at 280 mph.  Amato beat a tire smoking Eddie Hill with a near quick time of 5.02 seconds, 280 mph to advance to the precious semi-finals

The very next pair matched Ormsby against Prudhomme’s Skoal Bandit, and the Roseville, California resident outdistanced him with a time of 5.12 seconds at a speed of 283 mph.

Ormsby wondered if his championship hopes were flying out the window

Bernstein beat Johns in the quarterfinals, running a time of 5.11 seconds which meant he’d face Ormsby and Amato would have lane choice over the ‘Snowman.’

When the semi-finals arrived, it was Ormsby and Bernstein up first with Amato staring over in Ormsby’s lane awaiting his time.

Bernstein left the starting line first, setting off a great side-by-side race, but Ormsby managed to just squeak by the Budweiser King with a 5.02 ET, 285 mph.

Ormsby’s crew chief, Lee Beard was quoted as saying, “We’re tuning it up to race the big guy in the finals.  If we get a shot at him, we’re going to throw everything we can at him.  There’s a lot of money at stake.  Our fans have been supporting us all year long.  I cannot stress to you how important it is for me to win the world championship.”

Ormby’s great 5.02 run was just the medicine he needed to cure his race day problems.

“We made a big move and it looks like it worked for us,” said Ormsby.  “Yes, it was in the clutch area.  Bernstein was out on me, but I didn’t want to take any chances and I’m not making excuses, but I did not want to lose by a red light other than actually winning.”

Amato and Gene Snow were next with Amato taking the coveted left lane.  In another great side-by-side race, Amato stretched out his lead winning with a time of 5.03 seconds at a speed of 280 mph leaving lane choice for the finals in Ormsby’s hands.

Amato’s crew chief, Tim Richards wasn’t going to jeopardize any chance of losing the championship.   “We weren’t leaning on it too hard and didn’t want to lose lane choice, but I didn’t expect Ormsby to go 5.02 either.  We’ll see in the finals.  This track will be getting better then.”

Amato was grinning as he exited his dragster at the far end of the track and was thankful to get this far, but quickly got back to business knowing the entire 1990 NHRA Top Fuel season would all come down to one round of racing.

“That’s called pressure,” said Amato.   “I guess we lost lane choice and that’s pretty important here.  Thank goodness, the sun is going down on Parker Avenue and when we get to run, hopefully, the two lanes will be good by then.  The whole season, 18 races, comes down to the championship for a quarter million dollars on the line…that’s a lot of pressure.  I guess that’s what racing is all about.”

Going into the finals with everything at stake was a rematch of the 1989 Pomona finals. The Ormsby team had lane choice, first selecting the left lane prior  until they saw Bruce Larson haze his tires in the Funny Car final giving the win to Ed ‘The Ace‘ McCulloch. They decided to switch lanes after Bob Glidden  won in that right lane in the Pro Stock finals along with McCulloch, Amato what he wanted – the left lane.

If Amato could go quicker than Ormsby’s 5.01 in eliminations, he would be declared the outright champion by taking the 50 points away from Ormsby. But if he didn’t, it would come down to who crossed the finish line first.

No one had left the packed Pomona Raceway and all eyes were on these two.  Just as the sun was setting, the excitement was just beginning to build to a Top Fuel flurry.  Both cars had successful burnouts and were ready to stage.

As NHRA chief starter, Buster Couch hit the switch to start the race, Ormsby reacted just a scant too soon, red lighting his chances away allowing Amato to take his third world Top Fuel championship title.   Amato ran low ET of the race at 4.935 seconds at a speed of 282.39 mph snatching the additional 50 points away from Ormsby and putting them into his winner’s column.

Ormsby, sadly would lose his battle with intestinal cancer less than year later in August of 1991 at age 49.