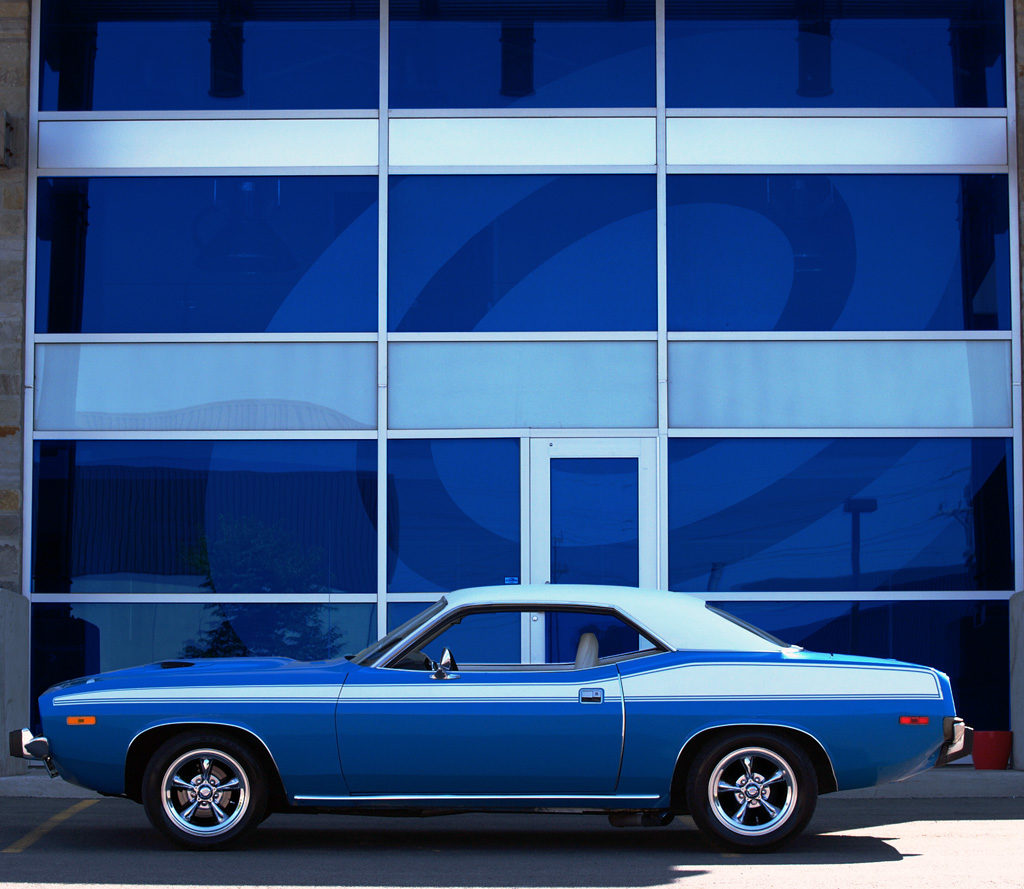 I usually get a tie or a bottle of wine for my birthday. In July 2001, Guy received a 1973 Plymouth Cuda from his wife, Debbie. What better way to celebrate your birthday than to drive one of the sexiest cars Detroit ever produced? The car was purchased in Boston through a bid on eBay. Guy, a former city bus driver, received a call from his wife at the end of his shift informing him of his new present. The car had all the original paper work dating back 38 years. Guy would be the third proud owner.

I remember when I was a youngster a friend’s father had a lime-green 1970 Cuda convertible. It was like first love, and I would intentionally visit my friend simply to gaze interminably at the car. Even today, I still consider it Detroit’s best designed model, particularly when you consider what its predecessor looked like – basically a chubby Valiant in curlers. The third generation Barricuda was Raquel Welsh by comparison. Even the name ‘Cuda’ was introduced to add to the sex appeal. 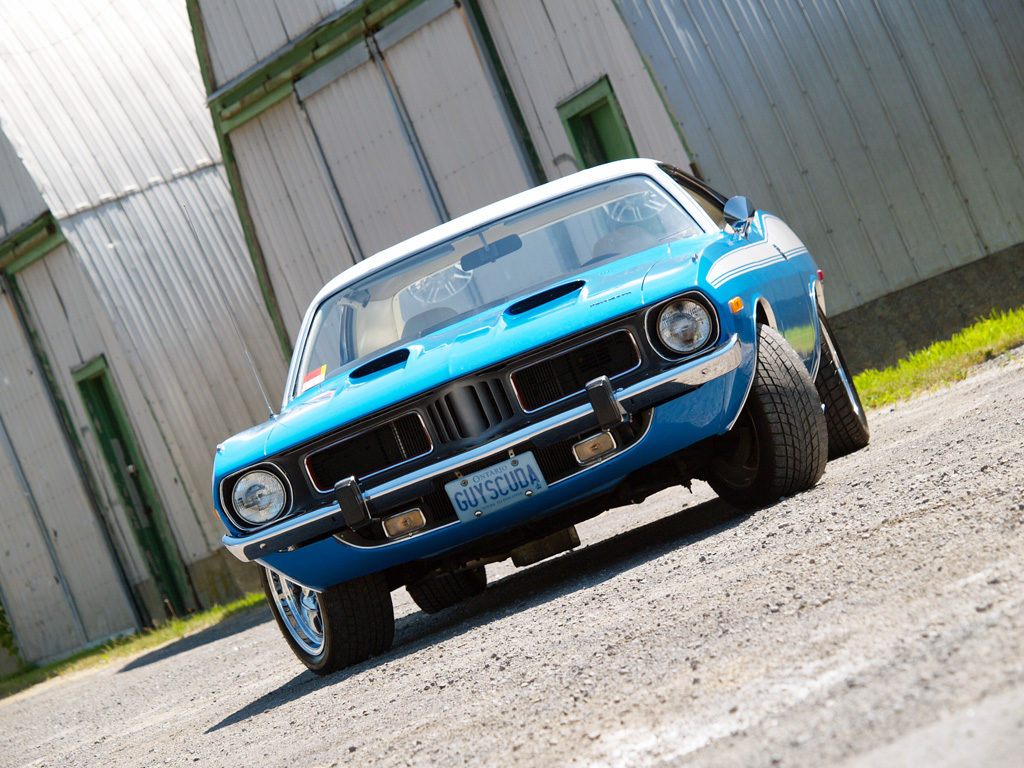 “I love the Cuda,” stated Guy, “for the simple fact that when I was 16 years old I had a Camaro Raleigh Sport, a fairly fast car for its time (1974). But my buddy, Roger, had just purchased a 1970 Cuda 340. As I looked over his new purchase, he invited me to take it for a spin and not to be afraid to take no pity on it, just floor it. The gods must be smiling. It had a 4-speed pistol grip. It was the most amazing feeling when the car started dancing in place, chain-smoking the tires. Wow! Also hearing the throaty rumble of that 340 can be felt on a seismic graph.” There was a huge smile on Guy’s face. “This is when I feel in love with the Cuda 340. Only one word to describe it – awesome!” 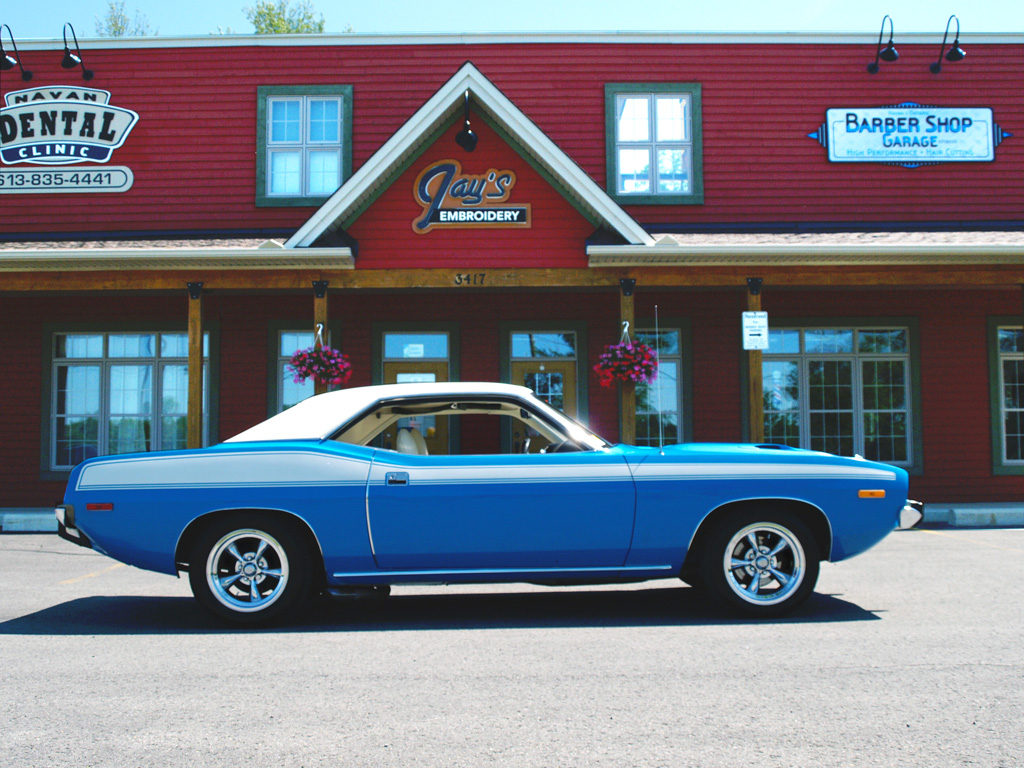 Of course, like any old car, there was restoration to be done. “The Cuda came with the standard 318, but I was not impressed by the performance, so I bought a rebuilt 1970 block 340 and had it totally rebuilt,” Guy explained.

We admired the lines of the car. It is so streamlined the wind could have shaped it. “This year,” continued Guy, “Debbie and I rebuilt the roof. We took out the old vinyl roof and installed a new one. This was quite an experience, but we did it.” 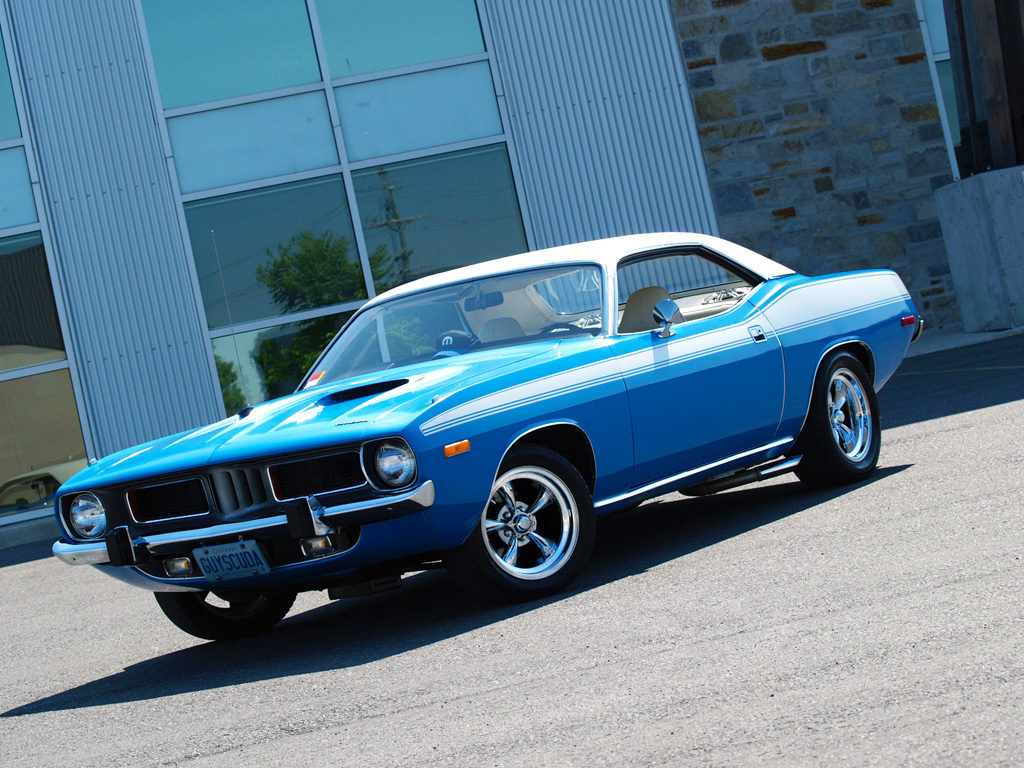 The three of us went for a ride. This is not a car for long-distance driving: steering requires plenty of arm wrestling, which is surprising considering it was designed to compete against its contemporaries in the popular SCCA (Sports Car Club of America) Trans Am series. And you need to have a bank account the size of Fort Knox, because the gas consumption would make an army tank seem more desirable, but it is comfortable, stylish and a definite head-turner.

The car has impressive acceleration and is very smooth at any speed, but as I asked Guy, how adaptable is it? “The car handling is totally different from other vehicles I have ever driven before because of the power it generates. It takes awhile to get use to it,” was his response. 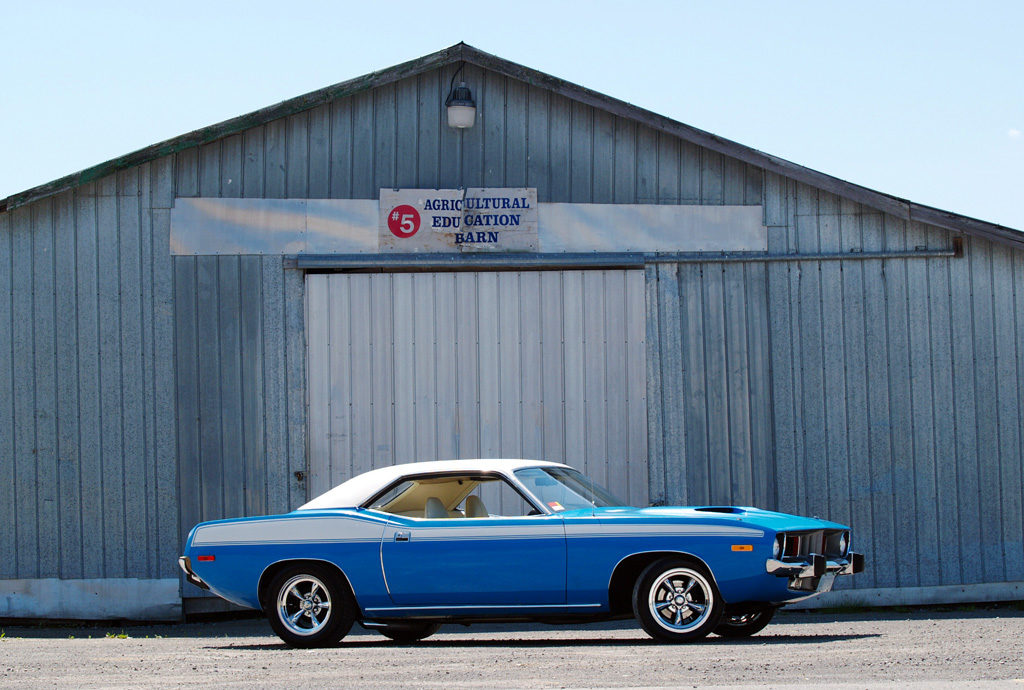 The original Pretty Blue paint job still looks brand new, and it caught the attention of everyone we passed. People of all ages stopped in mid-sentence to stare, or smile, or wave. The car, the company, the performance was wonderful and it seemed contagious for when we stopped, a stranger would often come up and ask us questions about the car like he was a long lost friend. Kids ran up to the car with a barrage of questions like they’re being spat out from an Uzi.

The Cuda never matched the Mustangs and Camaros in sales terms, but those who were attracted had a feverish loyalty. However, the Cuda’s fate was sealed when insurance companies took exception to muscle cars and government emission laws started to strangle the performance. The fuel crisis of 1973-74 finished it off once and for all. Amusingly, since its demise, its value has appreciated. In the United States, well-preserved models can fetch higher prices than Bugattis or Ferraris of the same vintage. 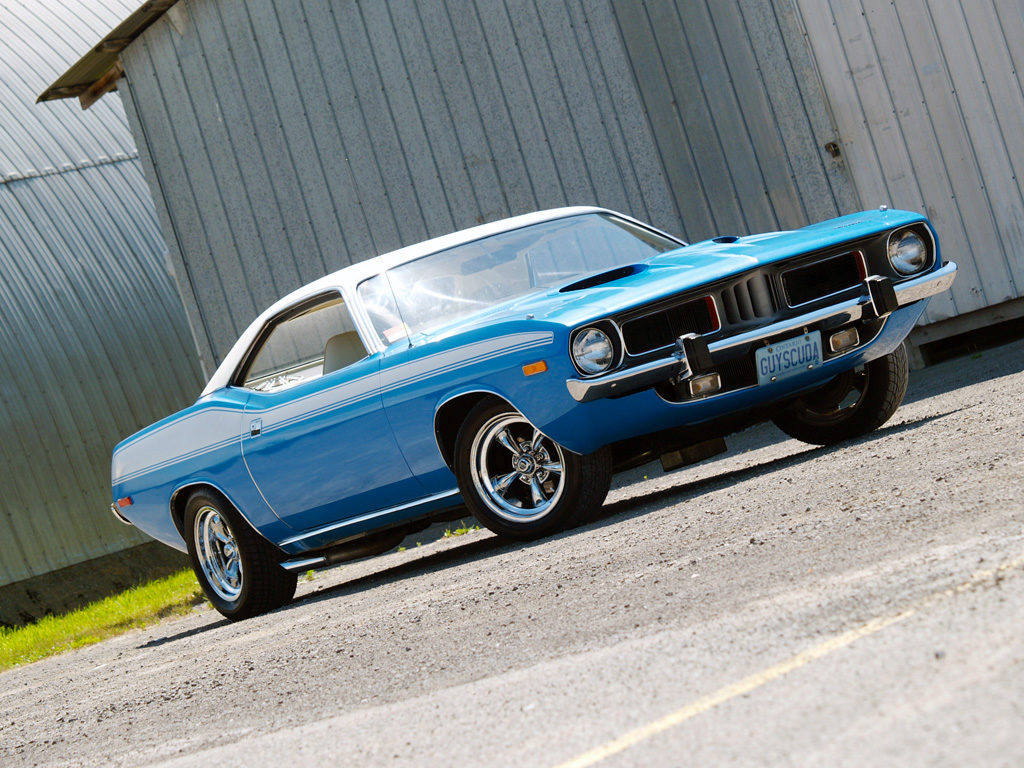 I asked Guy what this 43 year old car represents to him when he is behind the wheel. “This car represents freedom to me and having succeeded in life. It ignites memories spent with my dad in the garage rebuilding his favorite cars. The memories that the classic cars bring back are endless for my generation and by exposing these cars to our grandkids, hopefully they will have their own fond memories of them to share,” he explained.

Which lead me to ask for his outlook regarding the future of classic cars. He answered, “Regardless of generation, the main reason for preserving classic cars, I believe, is for nostalgic purposes. It is a link to our parents. I sure hope so because I got it from my dad going to car shows then helping him build one. I hope that trend continues.” 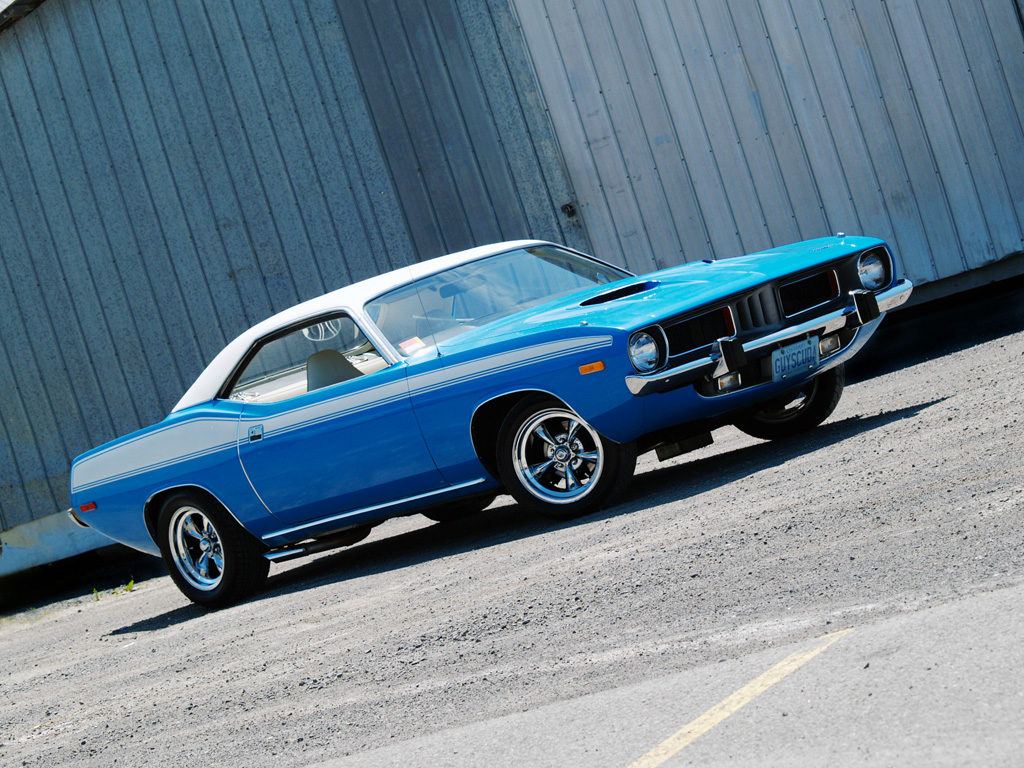 About Clive Branson 37 Articles
Clive Branson is a photography graduate from Parsons School of Design in New York City and has since divided his career as an advertising creative director/copywriter and as a freelance writer/photographer. He is the author of Focus On Close-Up and Macro Photography and numerous articles for magazines and newspapers throughout North America and Britain. Clive lives and works in Ottawa, Ontario.