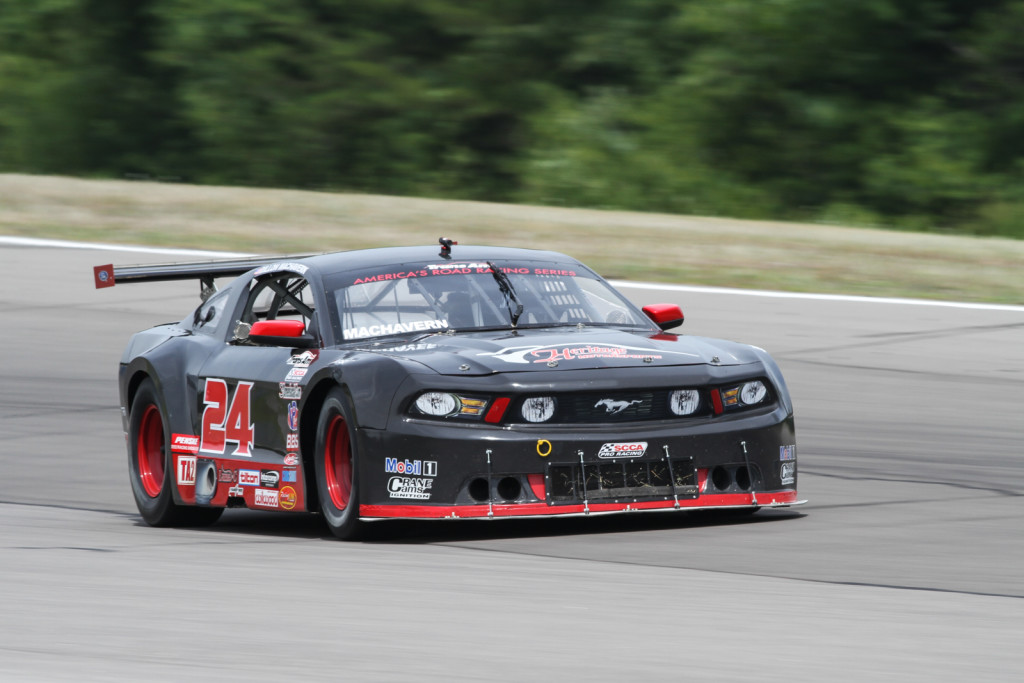 Amy Ruman, in the No. 23 McNichols Company Chevrolet Corvette, won her fifth TA class victory of the year at the Ryan Companies Independence Day Classic at Brainerd International Raceway.  She overcame class traffic, poor track conditions, and a strong challenge from Cliff Ebben during the last part of the race.  Ruman started out the day in second position, behind polesitter Doug Peterson in the No. 87 Chevrolet Corvette, and took the lead on the fifth lap of the race.

This win increased Ruman’s points lead, putting her 37 points ahead of runner-up Paul Fix, whose day ended earlier than expected and left him with a 10th place finish.

“We were hoping to come into this weekend and try and gain as many points as we could and thankfully that happened for us,” said Ruman.  “Unfortunately for Paul things didn’t turn out too well, but we’ll take the points.”

Coming in second place was Cliff Ebben in the No. 36 Ford Mustang, whose second place finish marked his third podium of the year. In third place was Peterson, the two-time defending TA Champion.

In the TA2 class, Dillon Machavern emerged with the victory in the No. 24 Ford Mustang after a battle with drivers Gar Robinson in the No. 74 Chevrolet Camaro and Tommy Archer in the No. 54 Chevrolet Camaro.  Machavern went from third place to first place on the 37th lap of the race as both of his opponents were blocked by lapped traffic.  He came home with his first TA2 victory over the 20-car TA2 field.

“We’ve worked really hard to get here,” said Machavern.  “Finally we get the win! We’ve been working all season – every race we’re getting better.  It was a hard battle out there, and I was just lucky to come out on top.”

This victory marks Machavern’s fourth podium appearance of the year, but the competition has not been easy.

Machavern also reaped the points benefits of his win, bringing him to second in the TA2 Championship race with a total of 139, moving him within 20 points of the current points leader, Cameron Lawrence of the No. 1 Dodge Challenger, and also into the lead of the Rookie of the Year standings.

Gar Robinson finished third and is now tied at 133 points with Adam Andretti for the third position.  Tommy Archer, who began the race on the pole, secured a second place finish after battling back and forth with Robinson.  He had recently overcome a battle with prostate cancer and returned to the driver’s seat.

Lawrence finished fourth while Tony Ave finished fifth in the No. 70 Ford Mustang.

In TA3 , Cindi Lux in the No. 45 Dodge Viper and Jason Fitcher in the No. 79 Chevrolet Camaro both captured their first Trans Am victories in the International Group and American Muscle Group, respectively.

Lux battled both teammate Steve Stremier of the No. 42 Dodge Viper and the slippery Brainerd surface to pursue her first Trans Am finish and victory.

“BIR absolutely lived up to its reputation as a survivor’s course,” said Lux.  “It’s a race, but it’s also a war.  It’s not about the war between us; it’s the war with the course around the clock.  That’s the cool thing about the race; there’s so much to manage.  We carry the most weight in the class, so we really have to focus on not overdriving the car. The guys set up the cars so that it’s easy for anyone to drive them; I’m just the lucky gal who gets behind the wheel.  I’ve got a lot to learn from the Series, this being my first finish.”

Streimer outlasted Jerry Greene, driver of the No. 93 Porsche 996 GT3, for second place, which is his second podium of the year, while Greene’s third place finish marked his fourth podium finish.  This moved the veteran up to third in the TA3 International Championship points.

Fichter began the race in third and inherited the lead from polesitter, teammate, points leader, and defending Champion Ernie Francis, Jr. of the No. 98 Chevrolet Camaro, who suffered a power failure halfway through the race.  In second place was Todd Napieralski in the No. 39 Chevrolet Camaro.  The win marked Fichter’s second podium and victory in the American Muscle Group.

“The track was pretty messy out there with all those cars,” said Fichter.  “I tried to just run a clean race – keep out of it all as best I could.  We had a little bit of contact out there, but it wasn’t too bad.  Hopefully, we can be up here again.  Ernie had some issues out there with overheating – not sure exactly what it was – but he wanted to dedicate this race to his grandmother; so I’m going to go ahead and dedicate this win to all the grandmothers, his included.”

In third place was Tim Rubright in the No. 77 Ford Mustang, his first ever TA3 podium placement.

In total, 39 cars participated in the race at Brainerd International Raceway as the Trans Am Series made its 28th appearance on the Minnesota-based track.

The race will be broadcast in full on CBS Sports Network on Saturday, July 25, at 12:00 PM EST.

Next up, the Trans Am will head to the Mid-Ohio Sports Car Course for Round 6 of the 2015 Trans Am Championship, the Next Dimension 100 and First Energy Muscle Car Challenge.