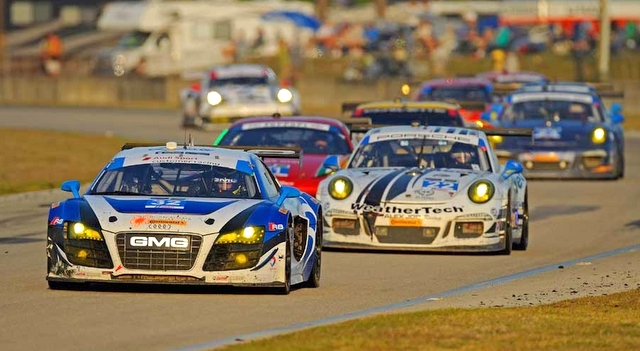 After watching Corvette Daytona Prototypes dominate the 2014 Rolex 24 at Daytona and the winter test session at Sebring International Raceway, the 2014 12 Hours of Sebring had a very different look with the Ford EcoBoost powered Riley race car getting its first win in the fastest class of the TUDOR United SportsCar Championship. While Ford grabbed its first win in the prototype class, a Porsche 911 claimed the win in both of the production based GT classes – following up on a winning performance in the GTLM class at Daytona.

Prototype Class
The Ford EcoBoost powered Riley race cars headed into the 2014 12 Hours of Sebring race with the hopes of posting a stronger showing than they did at the season opener in Daytona. Only one of the three Riley EcoBoost cars was still running at the end of the Rolex 24 and the best finishing Ford powered prototype car was 8th in the class and 15th overall – 28 laps back of the class and race winning #5 Corvette DP of Action Express Racing. Corvettes finished in each of the first four positions with two Nissans and a Honda joining those Corvettes to all finish better than the strongest EcoBoost race car.

Things didn’t change much for the Prototype class at the Sebring winter testing as, once again, the #5 Corvette DP was the quickest car on the track followed by a Nissan and another Corvette DP. Fortunately, Ford had moved up to the 4th quickest in the Prototype field so things were looking up as they headed into the 12 Hours of Sebring.

As soon as the cars took to the track for the first official practice at Sebring, it was clear that the Ford EcoBoost Riley teams had gotten things straightened out. A Ford EcoBoost powered Riley race car turned in the quickest lap in each of the four test sessions with the different teams practically taking turns atop the leaderboard. Across all four sessions, there were routinely several EcoBoost cars in the top 5. Surprisingly, those fast practice laps didn’t convert to a fast qualifying lap with the highest starting Ford being the #02 car in the 6th spot. Once again, the Action Express Corvette DP would claim the pole position but the 12 hours race was closely contested and without the mechanical problems that took the Ford Riley cars out of contention in Daytona, the EcoBoost powered cars were able to stick around the front of the field all day and night. The #01 Chip Ganassi Ford EcoBoost Riley car was sitting second behind one of the Honda race cars late in the race and when the Honda was forced to make a final pit stop – the Ford took the lead and held it through the end of the race. This included a caution flag about 20 minutes from the end of the race that would bunch up the field and lead to one great race to the checkered but in the end, the Ford prevailed. The #1 Honda finished second and the #5 Action Express Corvette DP finished third.

With the win, the #01 Chip Ganassi Ford EcoBoost Riley climbs to the third place in championship standings while the Prototype class is lead by the #5 Action Express Corvette DP and the #10 Wayne Taylor Racing Corvette DP sits in 3rd.

GT- LeMans
Over in the faster of the two production based classes, the GTLM class was once again dominated by a Porsche 911 RSR. After the #911 Porsche drove to victory at the Rolex 24, the Porsche North America team came into Sebring looking for back to back wins. They were able to get their second win of the 2014 season but this time, it was the #912 911 RSR that took the class win. The #912 car posted a disappointing finish in Daytona but the team of Michael Christensen and Jörg Bergmeister made up for it is Sebring, claiming the top qualifying spot in the GTLM class and sitting up front all day to hold off the #93 SRT Viper GTS-R in the final minutes of the race. After turning in a lackluster qualifying effort, both of the SRT Viper teams started towards the rear of the field but the #93 Viper was able to avoid mechanical problems or accidents to battle for the win in the final minutes of the 12 hour long race. The #55 BMW Z4 GTE that finished second in Daytona grabbed the third podium spot in GTLM at the 2014 12 Hours of Sebring race.

Perhaps the most disappointing results came from the Chevrolet Corvette C7R teams for the second straight race. After both Corvettes ran into mechanical issues at the Rolex 24, Corvette Racing came into Sebring looking to return to the same championship form as they displayed in 2013. Things got started early, with Corvettes turning in some of the the quickest GTLM lap times during the four practice sessions followed by a qualifying effort that put the new Corvettes together in the fourth and fifth starting spots. Unfortunately, both of the C7R Corvettes ran into troubles that forced them to settle for the sixth and eighth finishing spots. The #3 Corvette was involved in an accident on the first lap that would take it out of contention early and although the #4 Corvette was at the front of the GTLM class all day, engine issues in the final half hour took Corvette Racing out of contention for the win.

Thanks to a strong finish in both Daytona and Sebring, the #55 BMW Z4 GTE team holds the championship lead in GTLM followed by the #911 Porsche in second and the #912 Porsche in third. The SRT Viper teams currently sit fourth and fifth on the season.

GT-Daytona
The GTD class was once again the largest in the 12 Hours of Sebring race with 25 cars challenging for the slower of the two production based classes. After watching a variety of different Porsche 911 GT America race cars dominate the four practice sessions, it was a surprise to see only one Porsche qualify in the top 5 spots while a BMW Z4 GTE claimed the class pole. However, over the course of the 12 hour long race in Florida, the GTD class essentially thinned out – with six cars battling for the win in the final hours. That group included three Porsches, a pair of Audi R8s and the #555 Ferrari 458 Italia that took the controversial win in Daytona. In the end, the #44 Porsche from Magnus Racing took the win, followed by the #555 Level 5 Ferrari in second and the #23 Porsche from Alex Job Racing finished third (the #22 Alex job Racing Porsche grabbed fourth).

The #555 Ferrari 458 Italia continues to hold the GTD championship point lead with the #45 Flying Lizard Audi in second and the #44 Magnus Racing Porsche in third.

The TUDOR United SportsCar Champsionship makes its next stop in mid April in Long Beach California with only the Prototype and GTLM cars competing on the tight street course.