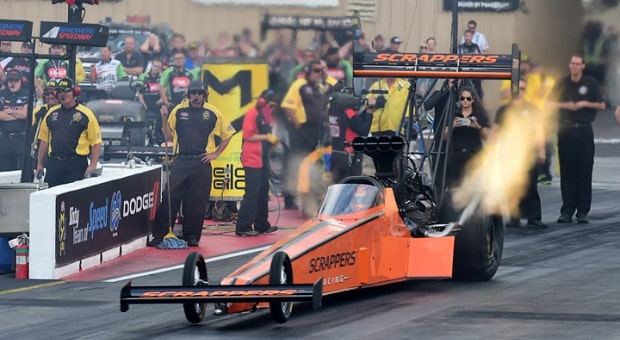 Mike Salinas’ Scrappers Racing Team has big plans for the 2019 season as he begins a second full year of NHRA Mello Yello Top Fuel racing. Last year Salinas had assistance from Alan Johnson, who has been consulting with different drivers over the past few years since shuttering his own squad, notably Brittany Force in her 2017 championship season with John Force Racing.

This year Salinas will have the assistance of both Alan Johnson and crew chief Brian Husen, which should elevate the Californian’s ability to go rounds and, perhaps, contend for a championship. Husen tuned Brittany Force in 2017, Shawn Langdon in 2013 and Del Worsham in 2011 to their Top Fuel titles; he and Alan Johnson have worked together for longer than 15 years.

Many members of the squad that tuned Brittany Force’s dragster the past two seasons will join Husen on the Scrappers team. Salinas will not only have a new crew chief and crew aiming him higher than his seventh-place result achieved in 2018, his first full season of Top Fuel racing – he’ll have a new car and all the parts that Johnson and Husen are accustomed to using for their setups.

Salinas’ seventh-place finish last year, including qualifying for the Countdown to the Championship, got the attention of others in the T/F pits, and his bright orange and black dragster has been a favorite on the tour. He is aiming for a family of racers, as daughters Jasmine and Jianna contest Top Alcohol Dragster and Pro Stock Motorcycle, respectively, in 2019. Daughters Jacqueline and Janae are expected to join their siblings on track in the near future.

“We work together and help each other, and we’re a pretty tight family. It’s amazing to have everyone involved in the sport,” Salinas said. “Where else can you spend time with family and all do something you love? Our whole family,” he shared, “we’re very competitive.”

Will his 38th race bring Mike Salinas to the Winner’s Circle?