Over 30 Years Of Engine Building Excellence! 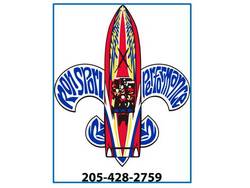 Ron Sporl has been building high-performance engines since 1982.His passion for speed began with the purchase of his first drag boat in 1980. He quickly moved from alcohol to top fuel with numerous wins and championship titles along the way. He attributes his success to the support and knowledge gained through the brain storming sessions with the likes of George Striegle, Nick Arias, and Mert Littlefield.

On a whim he bought a K boat, built a 572cuin Blown engine, and went circle boat racing winning the first race he attended. He soon traveled the country competing in a new venue that would position him for yet another chapter of his career.

When Ron was not off boat racing or in his shop building engines, he would be at the drag race strip tuning on customers engines 2 to 3 nights a week.

He was born and raised in New Orleans and located his business there. But in 2005 Hurricane Katrina destroyed his business and he relocated to Birmingham, Alabama. Once again he has built a successful
performance engine building enterprise including a complete in house machine shop.

Give Ron a call for you engine needs whether it be carbureted, supercharged, or fuel injected.


Partners and Supporters - Support Local Racing
Partner up with RacingJunk