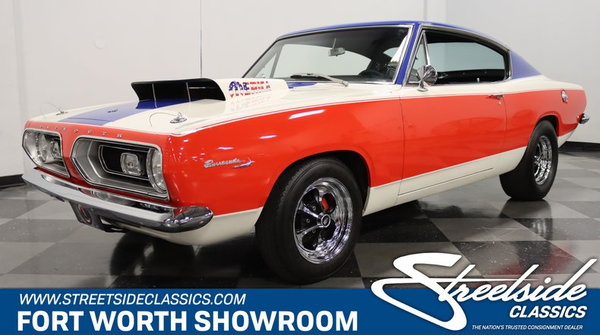 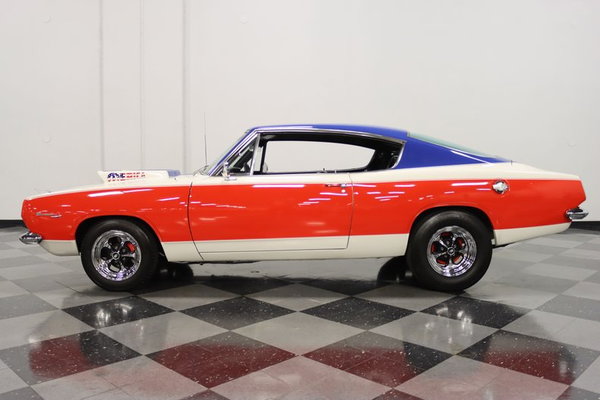 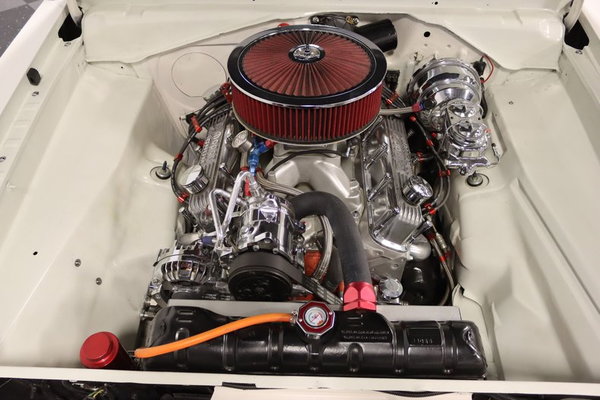 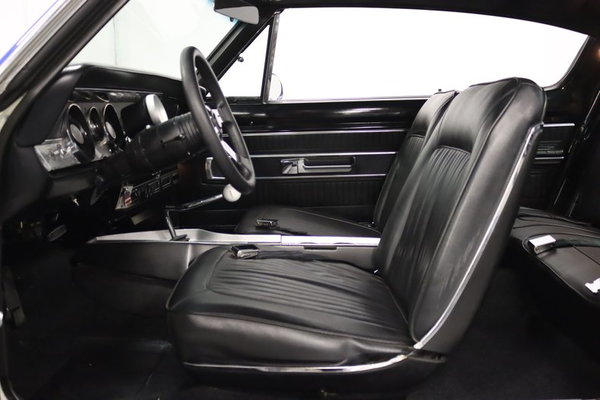 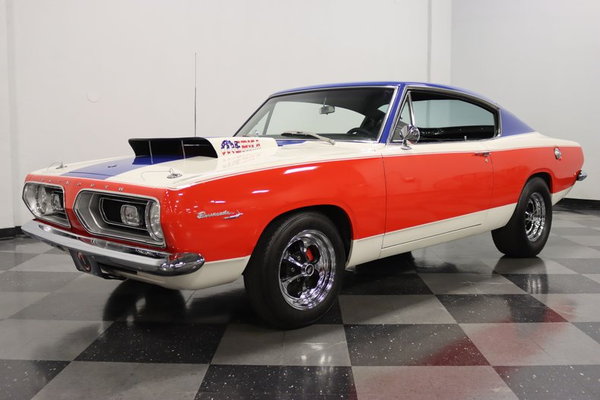 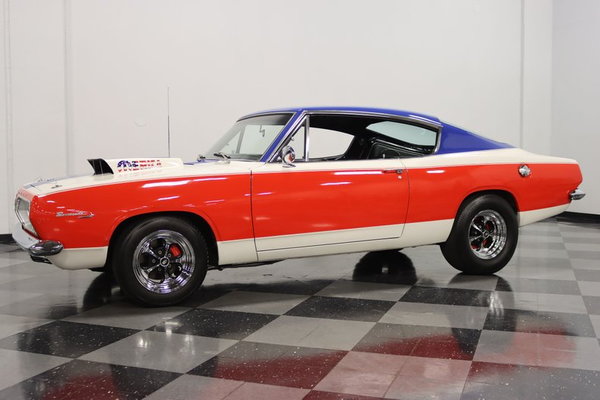 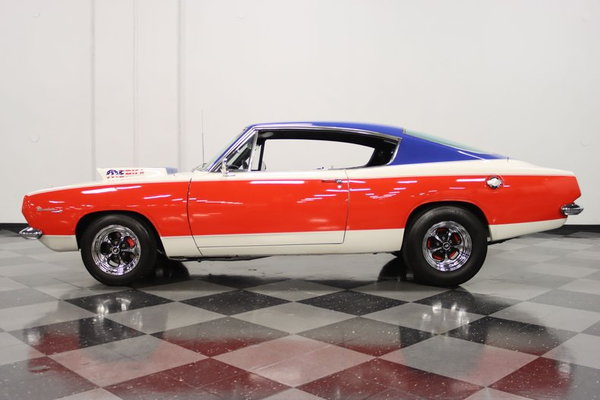 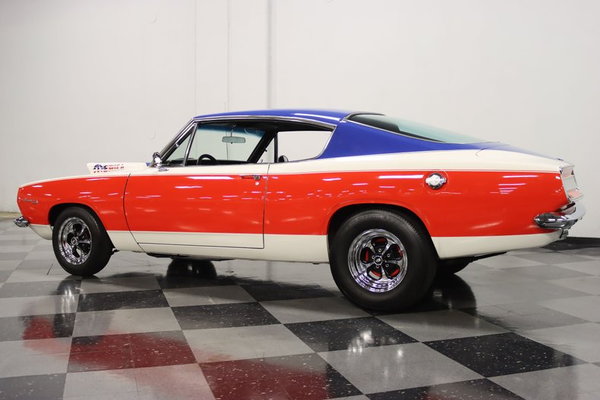 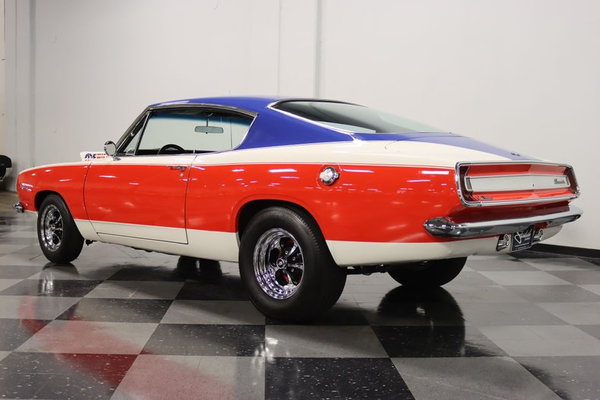 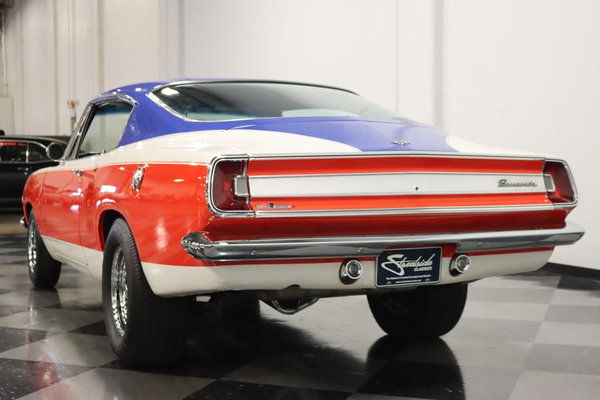 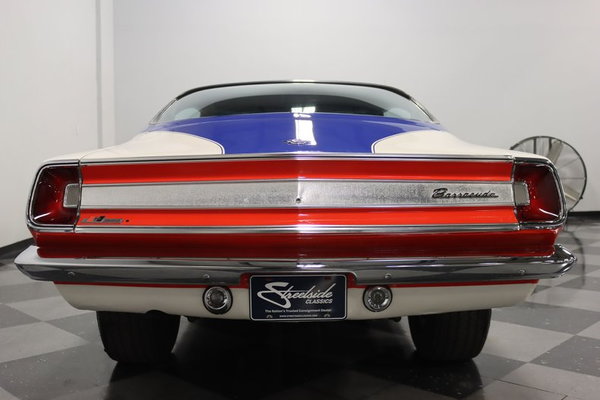 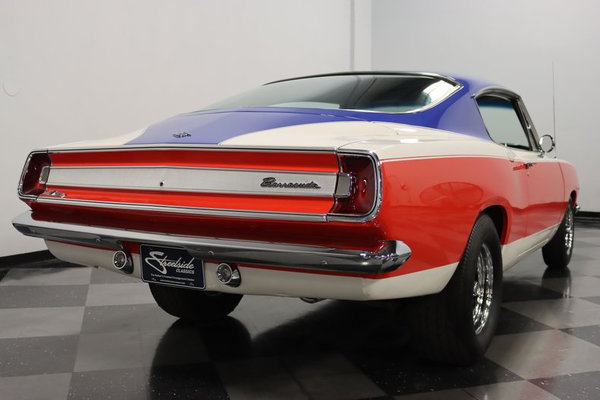 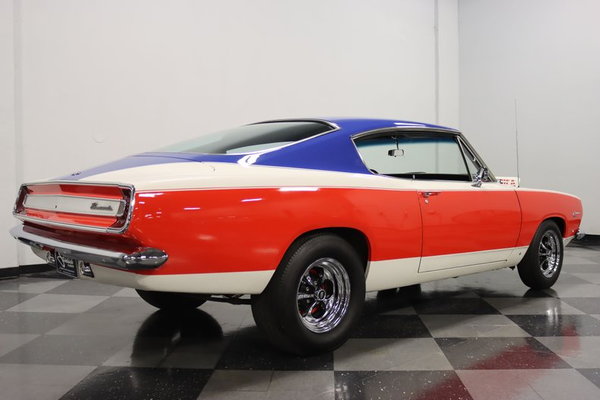 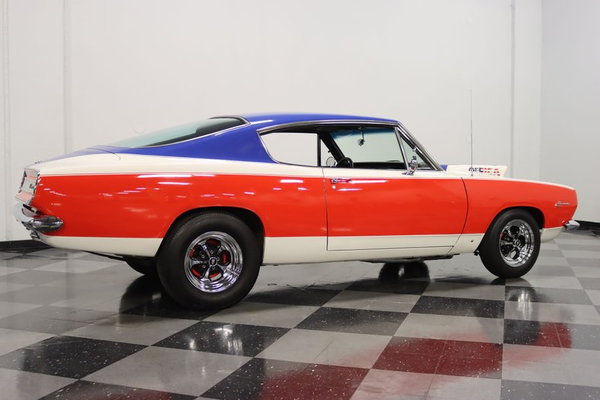 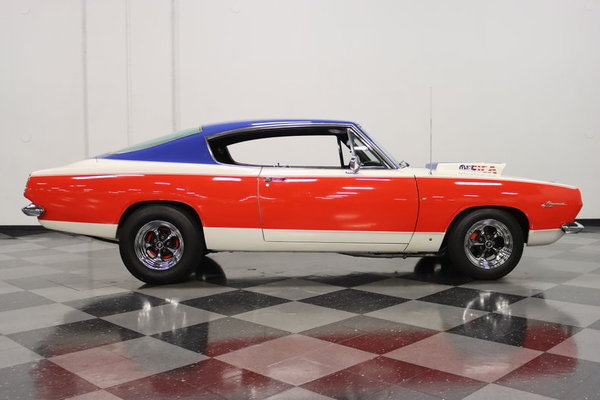 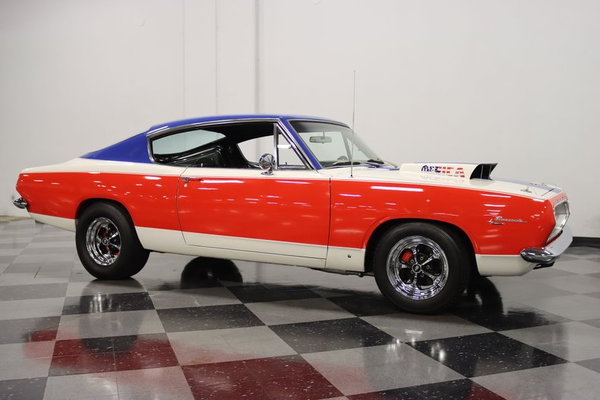 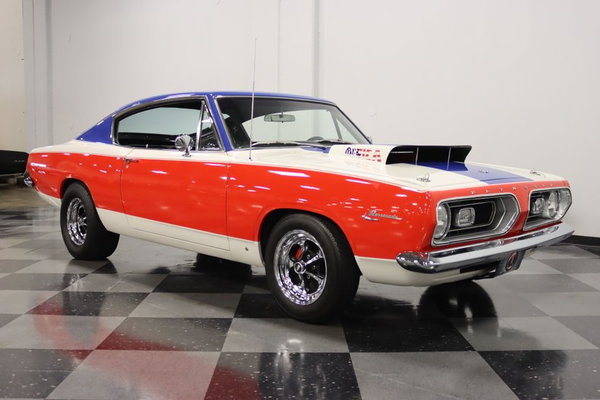 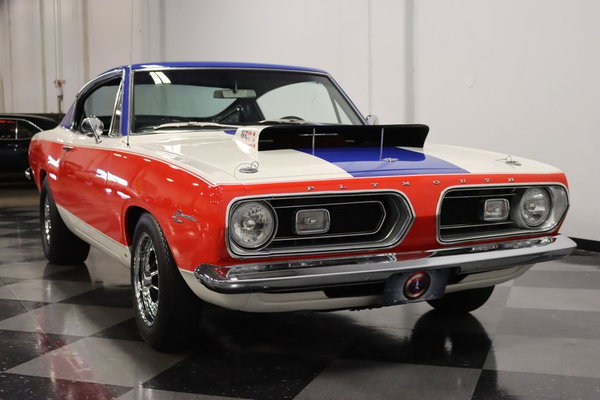 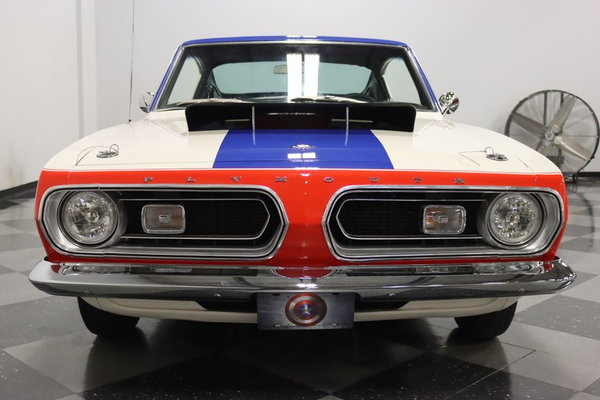 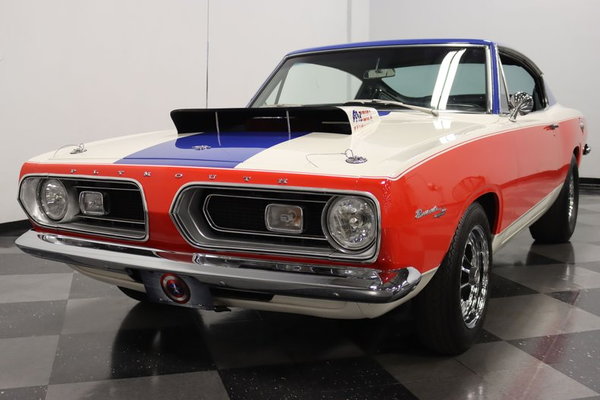 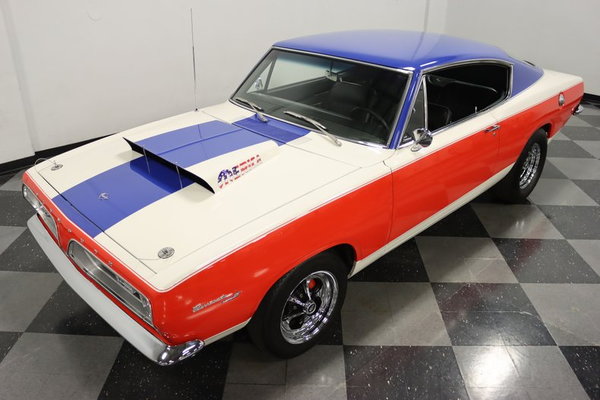 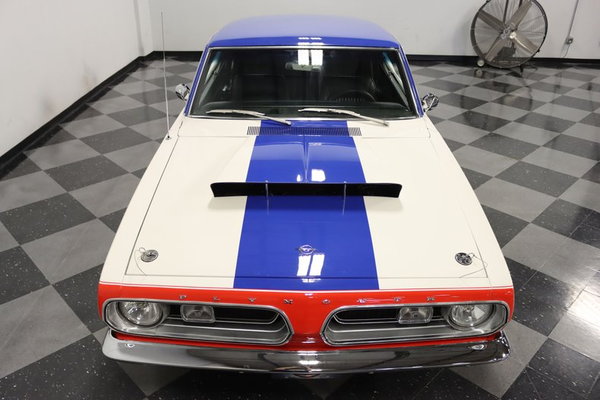 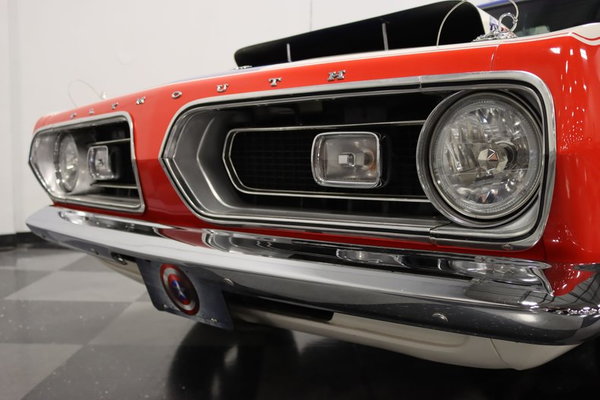 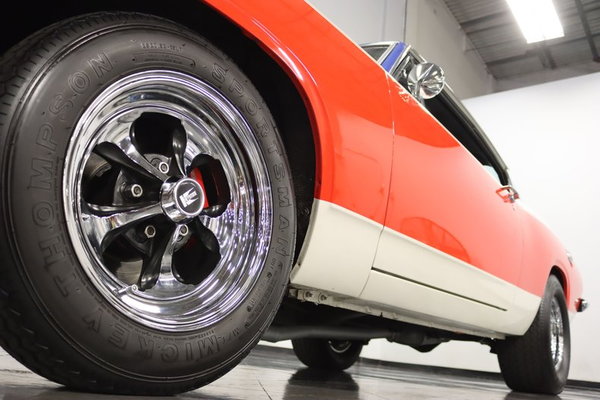 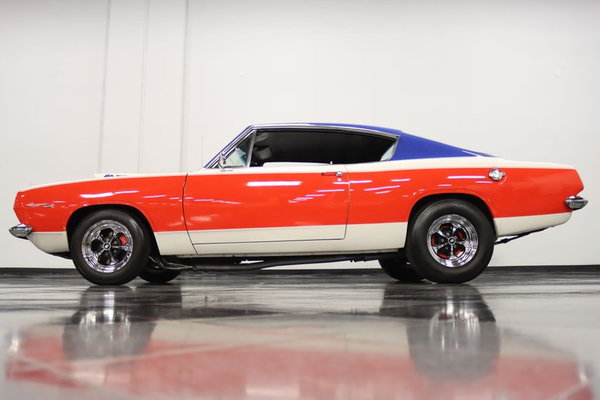 $79,995 Get Financing
Business Seller - Streetside Classics-Dallas/Fort Worth
FORT WORTH, TX , US

The later 'Cudas, especially the HEMIs, seem to get all the attention these days, but incredibly cool cars like this sweet 1967 Plymouth Barracuda is lighter, more agile, and quite likely way faster than most of its younger siblings. And when decked out in legendary Sox and Martin drag car livery, punctuated with a 360 V8 Mopar crate motor and 4-speed manual gearbox, this Battlin' Barracuda drag car tribute is simply one of the most exciting Mopars we've ever featured. Built to look drag-race ready yet equipped to handle the rigors of the modern road, this '67 features creature comforts like power steering power front disc brakes, and even cold A/C, so don't cast it off as some dusty old pink slip collector that only lives at the track. Nope, this Barracuda is a well-rounded muscle car that's ready to dominate on all fronts.

The classic Sox and Martin red-white-and-blue paint scheme will be familiar to most vintage drag racing fans, but not many know the history of these legendary Mopars. In the '60s and '70s, driver Ronnie Sox, crew chief Jake King, and manager Buddy Martin ran the Sox and Martin race team of Plymouth Super Stockers and Pro Stockers straight into the history books. Chrysler teamed up with this group of winners for various promotions, including the production of around 65 factory-produced Barracuda HEMI drag cars that pretty much looked just like this beauty. Granted, those cars were built with fiberglass fenders and hoods, no backseats, and even half-thickness doors and glass, but this particular '67 still embodies the pure American spirit of those cars, wearing its national colors with great pride outside, while hiding a powerful racing heart underneath. The Hemi Orange and Sox Blue paint job slashed across the White canvas grabs your attention instantly, and then you start to notice that there's more to this Barracuda than first meets the eye. First there's a flat hood with a massive hood scoop that looks like it was borrowed from an early Max Wedge or something, giving it a race-ready look that's uniquely Mopar. The trim Barracuda coupe bodywork is minimalism at its best, offering light weight and maximum rigidity for the rigors of track use, although this one has been built more for the road than the track (more on that in a moment). Paint and bodywork are worthy of coverage in Mopar magazine, with excellent fit and finish throughout that shows extremely well, with only minor imperfections to speak of. The builders wisely decided to forgo the classic blue headlights and blue glass that Sox and Martin utilized in their lightweight cars, installing upgraded headlights and glass instead to ready this car for the road today. The chrome and trim were likewise restored, which is nice to see since cars that are built for combat seldom get fresh jewelry like this one has.

The all-black interior neatly straddles the street/strip fence, offering full upholstery, door panels, and even a back seat to make it habitable for road trips and other car-related activities. The low-back front buckets are in fact correct for a Sox and Martin car, but the high-end black vinyl upholstery and custom center console between them suggests this car was also built to cruise and show. A refinished dash features slick carbon-fiber accent trim that's mirrored in the matching door panels and console, and the factory dials have been augmented with a slew of white-faced Mopar auxiliary gauges that include a large tachometer strapped to the steering column. A leather-rimmed and chrome Mopar steering wheel feels amazing in between the white-knuckles of the driver, and the chrome hurst shifter topped with a white cue ball knob falls easily to hand just a short reach away. The entire cabin was insulated with sound-deadening material before thick black carpets were laid down, the headliner was stretched taut over the roof, and the black pad that protects the dash is completely unblemished. Options include seatbelts fore and aft, a reproduction Mopar Solid State AM stereo, and an upgraded R134a A/C system that was neatly integrated under the dash and is blowing ice cold. The fold-down rear seat is way more than you'd get in a Super Stock car in '67, but we love the extra storage space it provides, not to mention the ability to bring along two friends for a ride. Out back, the surprisingly spacious trunk was trimmed to match the cabin and houses a relocated Optima gel cell battery.

The engine is a snarling, Mopar 360 V8 small block crate that's been built to take no prisoners, rated at a reported 375 horsepower out of the box. With Mopar aluminum heads, a dual-line 4-barrel carburetor and Mopar air-gap aluminum intake, plus Doug's long-tube headers and an H-pipe dual exhaust, it has a nasty bark and there's no question that it needs that big hood scoop to keep it fed. Very neatly detailed under the hood, it's clear that showing as well as racing are in this car's future, so the block wears Hemi Orange paint and bright chrome Mopar Magnum valve covers, and the engine bay was assembled and painted with as much care as the rest of the car. The stout small block is backed by a quick-shifting 4-speed manual gearbox with a Hurst shifter on top feeding a Dana 60 rear with 3.55s inside that's ready to beat almost anything off the line, but can still cruise at higher speeds with relative ease. Power steering and power front disc brakes ensure a great ride every time out, and upgraded shocks at the corners help set this 'Cuda's wicked stance. Keystone rims are correct Sox and Martin spec, and they wear staggered 26x7.5-15 front and 28x10.5-15 rear Mickey Thompson meats that finish the look perfectly.