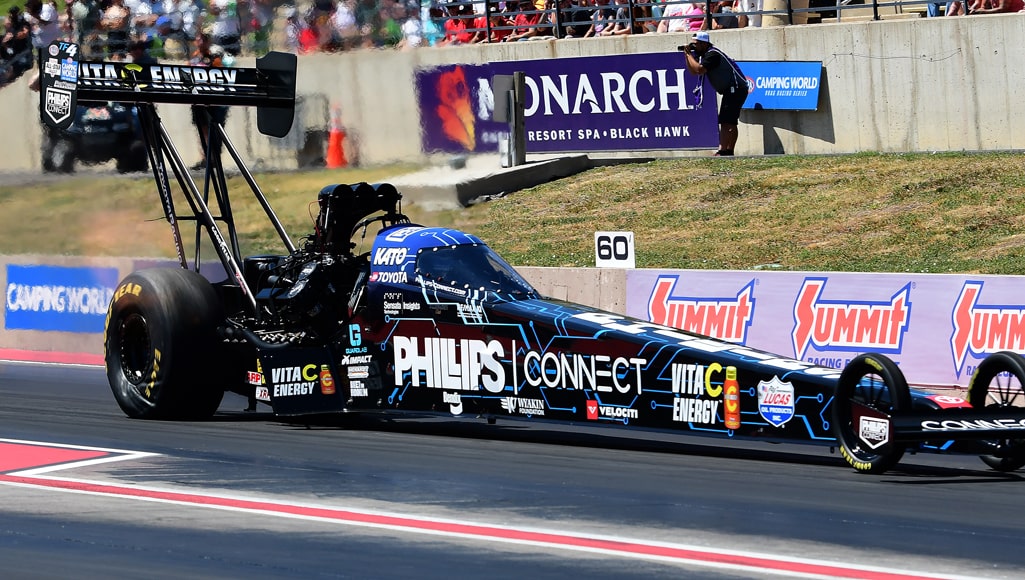 But first the Top Fuel and Funny Car teams have an opportunity to either get into the playoffs or move up the food chain during this weekend’s 40th annual Lucas Oil NHRA Nationals at Brainerd International Raceway in Minnesota. Pro Stock, both cars and motorcycles have the weekend off before converging near Indy in two weeks.

There are 15 Top Fuel dragsters on the entry list for this weekend and, with former top-10 runners Clay Millican and Austin Prock on the outside of the Countdown at this point in time, the tension is only rising, even as the heat dissipates from its Kansas fury. Thanks to victories in Seattle and Kansas, respectively, Tony Schumacher and Antron Brown have turned back into the Countdown realm, with the expectation of staying there. Consistent results will be the telling point for all four of these drivers, as we see whether they can continue momentum or whether they’ll fade under the pressure. 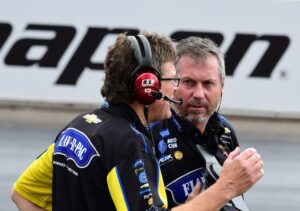 Despite an uncharacteristic first-round exit at the Menards Heartland NHRA Nationals last weekend, Brittany Force’s John Force Racing dragster maintains the top spot in the standings and she was first in her class to qualifying for the playoffs that get underway in Reading, where Maple Grove Raceway is now owned by Pro Stock specialists, the Koretsky family. Four dragsters are currently qualified: Force, Mike Salinas, Justin Ashley and Steve Torrence.

The reigning champion, of course, is still looking for a 2022 Wally winner’s trophy and is the defending titleholder at this track. What was a winning machine the past four seasons, Steve Torrence’s CAPCO Contractors rail hasn’t yet been able to close the deal, although he came close last weekend against one of his best friends in the business, Brown.

Torrence’s crew chiefs, Richard Hogan and Bobby Lagana, made big changes to the team’s set-up between last year and this and, while the change hasn’t brought them to the winner’s circle, Torrence realizes, “You can’t just stand still in this sport. You have to keep getting better,” he said. “We knew this new setup would take a while to develop and, while we haven’t been the dominant car so far, maybe we can be the dominant car the last six races” of the Countdown, Torrence mused.

With the events of the past few weeks, from the three-race Western Swing through to Topeka, the standings in Top Fuel have vacillated quickly. Although he’s been unable to repeat his rookie season’s pair of wins (to date, anyway), independent racer Josh Hart is in fifth place , followed by Tony Stewart Racing’s Leah Pruett, Shawn Langdon and Doug Kalitta of Kalitta Motorsports, Maynard Family Racing’s Schumacher and Brown, the latter 509 points behind second-generation nitro competitor, Force. Ashley continues to move up the ladder – he’s currently in third place – and has been to the semifinals – or better – in five of the last seven contests, including a Father’s Day victory at Bristol.

Billy Torrence is making the trip from Texas to Minnesota for this race, hoping to lend his experience to help son Steve gain that elusive 2022 win. We can expect some fireworks from Krista Baldwin, racing her grandfather Chris Karamesines’ dragster. The Greek does tend to show up when Krista’s in her leopard-accented rail. In addition, Scott Farley is entered in the Totten Racing McKinney dragster. This may be a short field but it’s one with extremely intense competitors, all of whom are hoping to put their names on a Brainerd trophy. This means, of course, they’ll have to forego a lot of activities in the track’s Zoo infield, notorious for housing some extreme party animals.

While the heat at Topeka was difficult for everyone, this weekend it’s supposed to be cooler. As Justin Ashley notes, “We didn’t reach our ultimate goal last weekend in Topeka, but we accomplished a lot under some very tough circumstances. The conditions at Brainerd will be vastly different than what we’ve been accustomed to racing in this summer. The weather should present our team with a great opportunity to capitalize on a very fast racetrack,” he said.

Last week’s winner, Brown has won this race five times, albeit once in Top Fuel and five times aboard a Don Schumacher Racing pro Stock Motorcycle. He’s also been to the finals here four times in a dragster and twice taken the No. 1 qualifier in Top Fuel (2014, 2016) and twice on a motorcycle. When he earned the win light last weekend, Brown earned his 53rd Top Fuel win at Topeka and his first as a team owner. “We’re not going to slow down,” he said, “and we didn’t show all we had (in Topeka). We’re right where we want to be, and we just want to keep getting better. We’re really looking forward to Brainerd – it’s always been a great track for us. It’s going to be cooler weather and we’re looking at running in the 3.60s. Once we get that, it’s game on!”

A fast racetrack at Brainerd should help those that didn’t excel in outlandish heat, but for those that take the heat well can likely emerge well during the four qualifying sessions – two each on Friday and Saturday – along with Sunday’s eliminations.

There are only five spots still remaining in the Funny Car Countdown lineup, with these two races to run. And despite not being on the entry list last week, both Tim Wilkerson’s and Chad Green’s Ford Mustangs made appearances, with Wilkerson moving up and Green remaining outside the top 10. At this point in time, Robert Hight continues, thanks to a six-win season to date, to lead the standings in Funny Car. He and his John Force Racing Chevrolet Camaro SS have put together a 237-point lead over Tony Stewart Racing’s Matt Hagan and his Dodge Charger SRT Hellcat, while reigning titleholder, Ron Capps lies third 326 points behind Hight as he gets to better understand his Toyota GR Supra. Last weekend’s runner-up, 16-time Funny Car champ John Force holds fourth place (-332) with his Camaro while Topeka victor Bob Tasca III (Mustang) is 413 points back of Hight in fifth place, albeit qualified for the Countdown with his second victory of the year.

As with Top Fuel, Funny Car has 15 entries that include everyone in the top-10 standings. Green and Alexander have made the trip to Minnesota, as has Dale Creasy Jr., running his Dodge Stratus flopper, Steven Densham’s Mustang and Bobby Bode III, who came oh-so-close to grabbing his first career victory earlier this year at Houston, where an engine explosion gave NHRA a great highlight reel as the driver tossed his gloves in frustration.

While it’s easy to look at the top three in this class and slough off the balance of the field, glance no farther than Force, runner-up at Brainerd and an 11-time victor at this track and runner-up twice, in 2013, and 2014. He may be aging, but Force retains his enthusiasm and commitment to racing hard and well – as last week showed. The fact that he’s currently fourth in the standings is proof positive that the guy who doesn’t want to be called a #GOAT really is just that. While it’s intriguing to consider the fact that John Force Racing could double up on championships with Brittany Force and Robert Hight, to count out the guy whose name is on the doors would be silly at the least.

Although the 40th Lucas Oil NHRA Nationals lacks both Camping World Pro Stock categories, the FuelTech NHRA Pro Mod Drag Racing Series presented by D-Wagon has competition all three days – plus the D-Wagon NHRA Pro Mod Shootout for Friday and Saturday. In this class’ second-ever appearance at this track, the 12 entries have the opportunity to double up by winning both Sunday’s race and the first-ever specialty race for the class, worth $10,000 for the D-Wagon NHRA Pro Mod Shootout .

Pro Mod points leader Kris Thorne, making his debut at the track is “excited, and it’s nice to have a little bonus deal added to the weekend,” Thorne said. “We’ve been running well, and this is something a little different, so we’re looking forward to it. Our key to success this year is we’ve been consistent, so we’re just going to keep plugging away and maybe we can get a couple of wins this weekend.” There’s a total purse of $25,000 for this specialty race; the first round is Friday at 5:15PM CT, with drivers getting a qualifying run earlier in the day.

Here are the first-round pairings, based on point standings:

Friday’s Camping World qualifying sessions take place at 2PM and 6PM CT while the nitro squad takes to the staging lanes at 1:30PM and 4:30PM on Saturday. Eliminations are set to begin at 11AM. This weekend’s preliminary activities air on either FS1 or FS2 with a three-hour production of final rounds broadcast on the FOX network starting at 3:30PM ET. While Friday holds the possibility of scattered thunderstorms during day and evening hours, both Saturday and Sunday look partly cloudy. Temps are not expected to hit the 80-degree mark, which should be a relief for everyone who survived Topeka’s sweltering temps.