Tim Wilkerson has been racing in Funny Car for more than 20 years, having vaulted from NHRA Lucas Oil Sportsman racing in 1996. He’s an anomaly in that he owns, tunes and drives his Levi Ray and Shoup (LRS) Ford Mustang Funny Car.

There are others, sure, who own and race their own cars – two-time Funny Car champ Cruz Pedregon comes immediately to mind – but Wilkerson was the sole single-car entrant to qualify for last year’s Countdown to the Championship playoffs, one of only 10 drivers eligible for the title.

Wilkerson has never been known as a fast starter, but this year he’s been on a roll. As he approaches his 499th NHRA Funny Car start this weekend, the fan favorite is hoping for a second Wally trophy in the NGK Spark Plugs Four-Wide NHRA Nationals at zMAX Dragway outside Charlotte, N.C. He won the 2016 edition of the Four-Wide Nationals at this track, defeating defending victor Cruz Pedregon.

Thus far it’s been a good year for Wilkerson, who drove his Ford Mustang to the final rounds of both the Gainesville and Las Vegas races, the latter NHRA’s second four-wide contest, now in its second year. Wilkerson was also the No. 1 qualifier for the Las Vegas race earlier this month. 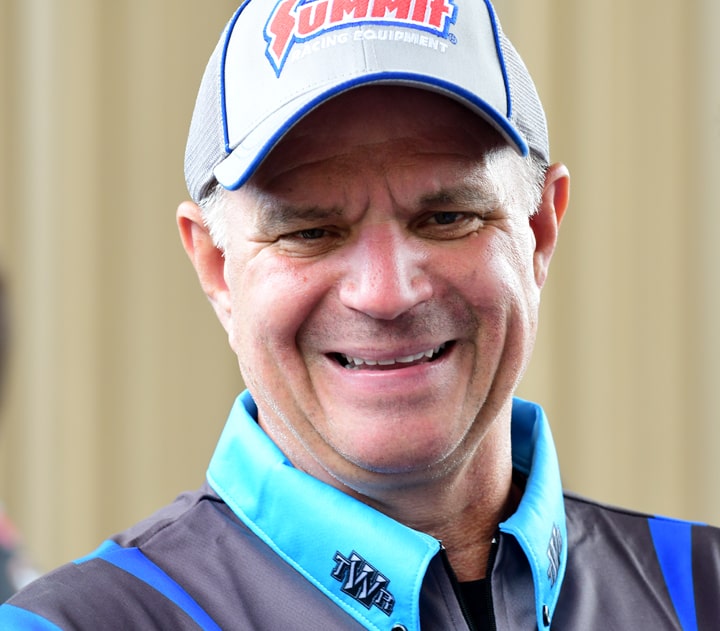 After five events in an 18-race “regular season” before the six-contest Countdown begins after Labor Day’s Chevrolet Performance U.S. Nationals, Wilkerson holds seventh place points and is tied with 2016 champ Ron Capps. “We’ve got our form back again and hopefully it keeps that way,” said the man who has 11 straight top 10 season finishes. “The car is running good now.”

Although he had difficulties in Houston and exited in the first round after his Mustang “shook its tail off,” Wilkerson had little over a week to think about those difficulties and prepare to overcome them this weekend at zMAX and next week, potentially his 500th NHRA Funny Car race, in Atlanta. While working on that, “We’re also concentrating on keeping it fast. We’re excited for this weekend and getting back to Four-Wide.

“Winning that race in 2016 was a lot of fun, and it would be really special to get this team and our LRS Ford Mustang to the winner’s circle there again,” Wilkerson said. It’s not out of the question, even with the prospect of scattered thunderstorms and windy conditions forecast for the optimal qualifying sessions on Friday afternoon and evening. Although 2016 is Wilkerson’s sole victory at zMAX, he has a No. 1 qualifier from the traditional two-wide fall race and, in fall of 2018 qualified third and went as far as the semifinals.

Tim Wilkerson has been on the cusp of an NHRA Funny Car championship more than once and knows what it’s like to give up the title. Always the nice guy, wouldn’t it be cool to see the independent owner/tuner/driver turn his high-level consistency into a title? After 498 races, Wilk owns 20 Wally winner’s trophies, an equal number of No. 1 qualifier awards and 23 runner-up results in 43 Funny Car final rounds. He’s got the goods; the rest is up to fate.