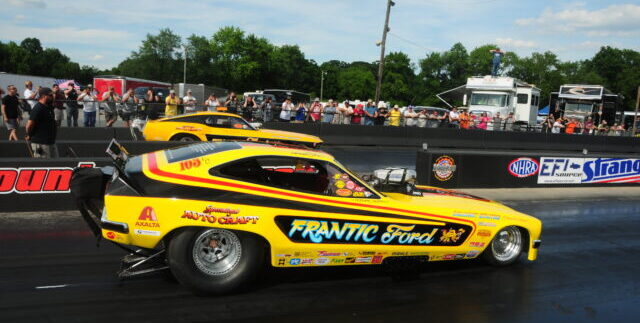 PRI is just around the corner and we’d love if you came to by our booth to say hello! Hanging with us (in booth 2143) will be the Frantic Ford, if you’ve been following us for a while you will be at least a little familiar with this badass Funny Car. The Frantic Ford was first spawned in 1968 with tuner Jim Fox and driver Ron Rivero who owned the car and ran it all across the country. Several racers spent time behind the wheel including Sarge Arciero, “Rapid” Roy Harris, and of course the late Dodger Glenn. Glenn was tragically involved in a fatal crash at Maple Grove Dragway in July 1978 and owners Jim Fox and Freddy Frey decided to step away from drag racing and the Frantic Ford name was suspended for years.

The current iteration of the Frantic Ford Mustang II is actually a tribute to the late Dodger Glenn and bringing new life to the Frantic Ford name is the Sweetman family who have their own drag racing pedigree. Consisting of Drew “The Shoe”, his girlfriend Toni, brother/tuner Dannie and patriarch Henry. The Sweetman’s were close friends to Dodger so it was only fitting that they carried the torch.