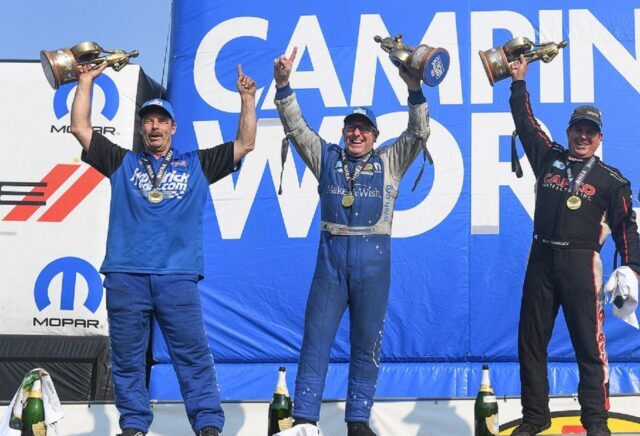 While young drivers seem to be all the rage these days, the start of the 2021 NHRA’s Camping World Drag Racing Series Countdown to the Championship at Maple Grove Raceway would give three veteran drivers the chance to prove that experience is the true mark of a champion. Beginning with the father of current Top Fuel king Steve Torrence, Billy Torrence claimed the win on Sunday after ousting Justin Ashley’s attempt to take down the Top Fuel veteran in Sunday’s final round. Although he doesn’t have a full-time ride this season, Funny Car veteran Tommy Johnson Jr. also had the opportunity to return to his winning ways at this weekend’s Mopar Express Lane NHRA Nationals. After filling in for defending Funny Car world champion Matt Hagan, who missed his second straight race due to COVID-19, delivering a run of 3.926-seconds at 330.23 MPH in the 11,000-horsepower Mopar Dodge Charger SRT Hellcat to beat John Force in Sunday’s final round. The most impressive veteran win of the weekend came in the final round of Sunday’s Pro Stock race where Greg Anderson tied Warren Johnson for the most wins in Pro Stock history after taking down Erica Enders in Sunday’s final round. 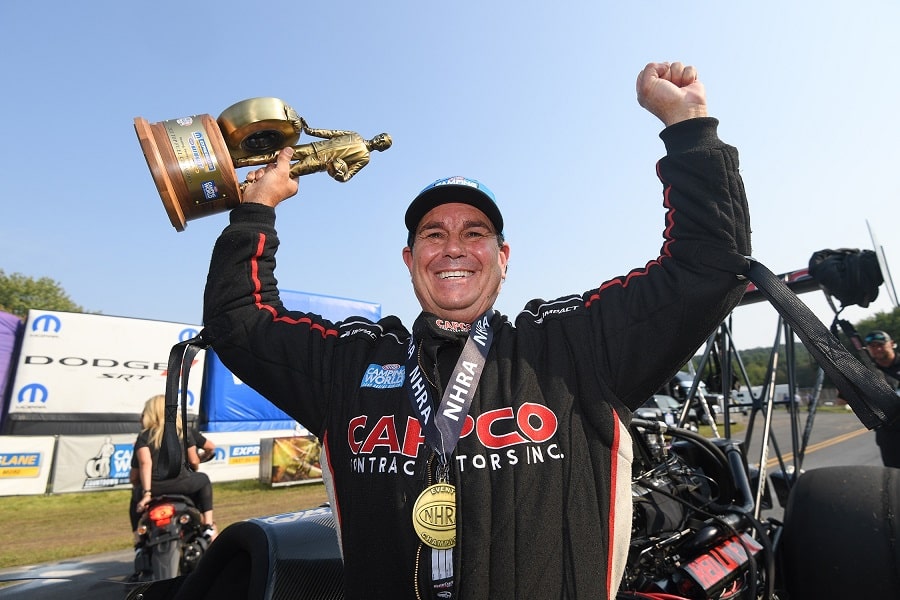 Before starting the Countdown to the Championship in impressive fashion, Billy Torrence got past Josh Hart, Shawn Langdon, and No. 1 qualifier Brittany Force to reach his second final round this season and 12th his career. Taking on Force in the semifinals, Torrence put together a solid 3.725-second pass, while Force had a cylinder out nearly the entire run, slowing her to a 3.777. After running in the mid-3.60s at 330-plus mph for most of the weekend, it was a tough loss for Force, and Torrence was more than ready to take advantage.

After lining up alongside Top Fuel young gun Justin Ashley, the father of the Torrence clan ended his weekend with his first win of the Countdown with a 3.720-second pass at 326.08 mph in his 11,000-horsepower Capco Contractors dragster against Ashley’s 3.784-second attempt.

“This win felt so good,” said Torrence. “I had a really great car all weekend and my Capco team made this possible. I am certainly the weak link in my car, but they made me look good in the end. It says a lot for the boys. It is a shame they don’t have a better driver, but the car is really good. I have a good time and at my extended age, I’m going to take all the wins I can get. I just hope that I get to race Steve next. I swear I think Steve and I would footrace if that’s all we had. You name it, we’re going to get out and race.”

Thanks to this win, Billy Torrence is just 42 points out of first going into next weekend’s DeWalt NHRA Carolina Nationals at zMAX Dragway. 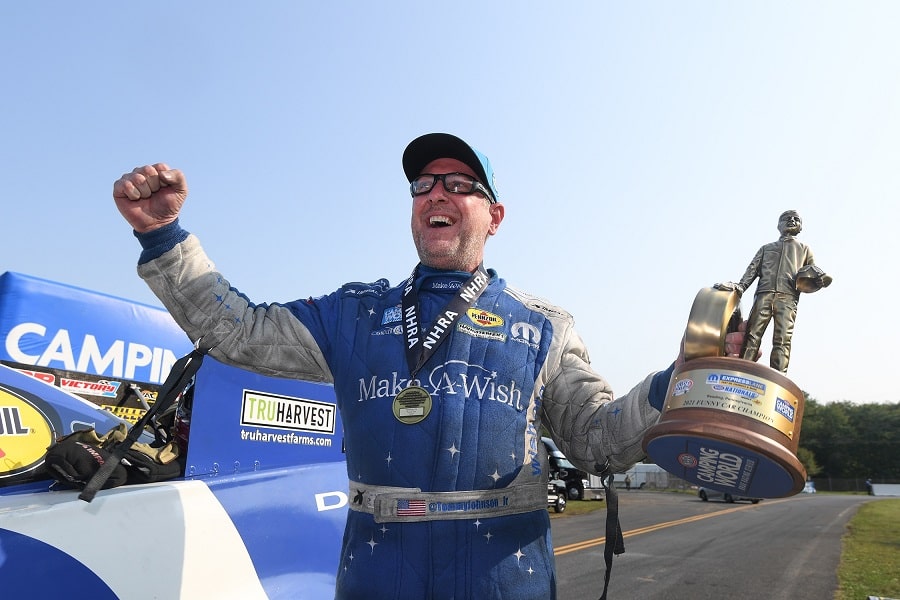 Billy Torrence would not be the only NHRA veteran to pull off an impressive win during this weekend’s Mopar Dodge Charger SRT Hellcat. After filling in for defending Funny Car world champion Matt Hagan, who missed his second straight race due to COVID-19, Tommy Johnson Jr. has now become the super sub after pulling off some of the most impressive runs during Sunday’s final elimination rounds.

After picking up round wins against Jim Campbell and DSR teammate Ron Capps, running 3.892 in each round, Johnson went a stellar 3.902 at 331.53 in the semifinals to squeak past J.R. Todd. After moving to the final round for the 57th time in his career and the first time this year, Johnson would have to take down yet another legend of the sport. Despite having to take down John Force in Sunday’s final round, Johnson took down the 16-time Funny Car Champion with a run of 3.926-second pass at 330.23 MPH.

“This win was pretty cool, and I was seriously astonished,” said Johnson. “I kept thinking of my dad (who passed away earlier this year) all day. The sport of drag racing is my whole life and to come out and win for these guys, it’s just amazing. I’m still astonished it happened. It was about as smooth of a transition to make this happen. To come out here and get a win, this race will always mean so much to me.” 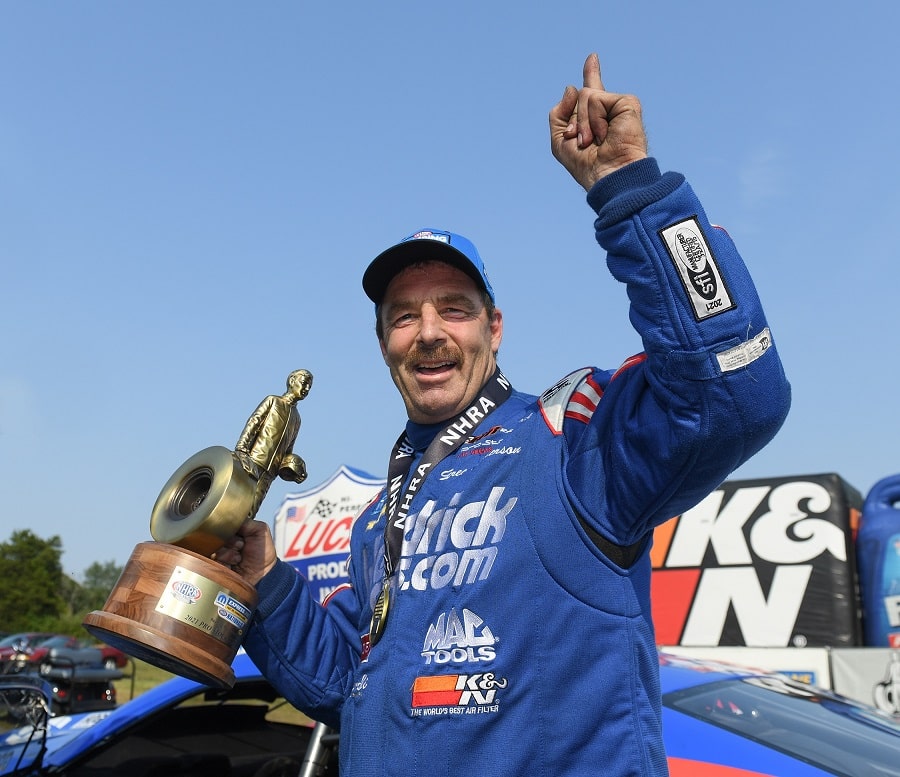 While both Torrence and Johnson’s wins were impressive, the most historic win of the weekend came from Pro Stock legend Greg Anderson. The driver of the HendrickCars.com Chevrolet Camaro advanced to the final round for the sixth time in 2021 and for the 164th time in his incredible career with victories against John Gaydosh, Matt Hartford, and Troy Coughlin Jr. After moving onto his final battle against the Pro Stock’s femme fatale Erica Enders, Anderson ran away with the victory after a pass of 6.578 seconds at 208.30 MPH to earn his 97th career victory, which now ties Anderson with Warren Johnson for the most wins in Pro Stock history.

“I was absolutely shocked that the win light came on. There’s been so many races in a row where it simply wouldn’t come on,” said Anderson. “You think you have everything going well and the light just doesn’t come on in the final round. What a great, great feeling. There’s nothing better than when that win light comes on. It was a huge day to finally tie Warren. I learned so much from him and it’s kind of a cool story. Now I get a chance to try and beat him, and we’re going to Charlotte with a chance to break that record.”

Thanks to this victory, Anderson now sits atop the points battle as the Countdown to the Championship continues in Charlotte.

The NHRA Camping World Drag Racing Series Countdown to the Championship will continue at the DeWalt NHRA Carolina Nationals at zMAX Dragway (Sept 17-19, 2021).  Stay tuned to RacingJunk.com for the latest news from the drag strip!

About Ellen Richardson 467 Articles
Ellen Richardson is the author of Behind The Wheel for RacingJunk.com. This automotive sports junkie has a passion for telling an athlete's story while also covering various racing activities. Find out more about her at ellennrichardson.wordpress.com or follow Ellen on Twitter at @ellennrich or Instagram at elnrich33.