Opening night at Callaway Raceway in Fulton, Missouri proved to be the tail of the Wiley veteran and Young Lion Friday night in Lucas Cattle Company ULMA action. This time it was veteran driver Vance Wilson of Quincy, Illinois who managed to hold off a persistent Payton Looney for his 38th ULMA career victory.

Fifteen racers made their way to Fulton, Missouri’s Callaway Raceway Friday night in what turned out to be the lone ULMA-sanctioned event of the weekend after rains moved in on Saturday and delayed opening night at Lucas Oil Speedway.

Wilson and Niehoff started on row for the main event, which had an exciting start as soon as the green flag was waved. Fifth starting Gage Wineland experienced problems with a right-rear wheel and nearly ended up on his lid; fortunately, Wineland was okay but retired to the pits after the incident. Dustin Hodges received some damage from the incident but was able to return after a quick trip to the pits for repairs.

Upon the restart, Wilson quickly shot out to an early race lead bringing third-starting Payton Looney and Niehoff with him. The trio quickly made it a three-car breakaway with Cody Holtcamp, Justin Russell, and Jon Melloway giving chase.

Looney pressured Wilson for several laps on the high side but could never pull alongside to make the pass. Caution waved over the field early on for Todd McCoin who spun in turns three and four setting up a restart with Wilson continuing to lead Looney, Niehoff, Melloway, Russell, and Holtcamp. 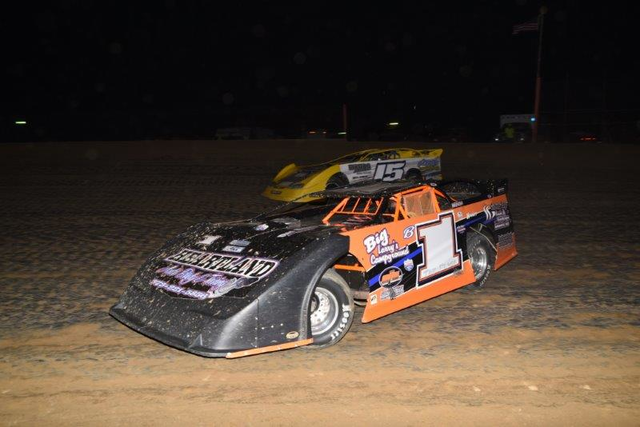 Shortly after, Dave Miller spun leading to a second caution period and another restart. Just shy of the mid-point in the race, Melloway moved to third position bringing Russell with him as both drivers advanced in front of Niehoff inside the top five.

A third yellow-flag waved for John Ketterrer as the field again regrouped for the restart, this time Wilson built up his biggest lead so far in the event as Looney was unable to gain ground. Wilson continued cat-fishing the low side with Looney still running in the high groove. Wilson’s night nearly ended prematurely as an ailing Miller tried to pull his car into the infield just as Wilson was coming off turn four.

Miller’s car stalled in the infield while Wilson took evasive action to avoid hard contact and stopping on the race surface; a yellow flag was thrown and charged to Miller leaving Wilson out front. This time on the restart, Looney hounded Wilson for the top spot as they were clearly the two fastest cars of the night.

Justin Russell and Dwight Niehoff raced side-by-side for several laps for the fourth spot behind Melloway who maintained third. A hard-charging Terry Wilson advanced to sixth position by late in the race just ahead of Holtcamp and Hodges inside the top ten.

A three-car incident in turn four led to the fifth and final caution of the event when Holtcamp tangled with Terry Wilson and Hodges. Holtcamp and Wilson reportedly both exited their cars during the red-flag period and were ultimately disqualified by Callaway Raceway officials.

For the final restart, Vance Wilson led Looney and Melloway to a green, white, and checkered flag finish. In the end, Wilson fought off all challengers and claimed the victory. Looney ran a solid second with Melloway third. Justin Russell of nearby Henley, Missouri came away fourth with Niehoff fifth. Rounding out the top ten were Chris Cox, Dustin Hodges, Chuck Melloway, Todd McCoin and John Ketterer.

Racing takes place again this Friday at Callaway Raceway during a normal weekly race program. Visit the track online at www.callawayraceways.com or call 573.592.7795 or 573.642.6580 for additional information. The track is located at 7419 County Road 405 in Fulton, Missouri. Gates open at 5, driver’s meeting begins at 6:45 and hot laps start at 7 with racing at 7:30.

Lucas Oil Speedway in Wheatland, Missouri was scheduled to begin its regular weekly racing program last week, but persistent wet weather plagued opening night and forced officials to pull the plug on Saturday’s action. The track will try once again Saturday evening to host its first weekly racing championship series event. Gates open at 5 p.m. with hot laps at 7 and racing at 7:30. Additional information regarding Super Saver Special night at the speedway may be found under the schedule link at www.lucasoilspeedway.com.