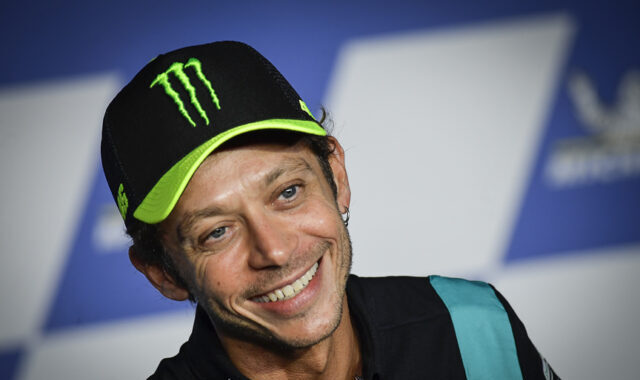 The Doctor is leaving his office.

Valentino Rossi, now 42, is in his 26th season racing two-wheel projectiles. He announced his retirement from motorcycle Grand Prix racing at the close of the 2021 campaign, after spending this final season with Petronas Yamaha SRT, and will compete in this weekend’s Michelin Grand Prix of Styria Austrian GP at Red Bull Ring in Spielberg.

The very tall and lanky Italian has accumulated laurels in every form of motorcycle racing, earning nine world championships, 115 race victories and 235 podium results, becoming the sole competitor in history to win titles in the 125cc, 250cc, 500cc and MotoGP classes. He has competed in more than 400 motorcycle Grands Prix, using the No. 46 his entire career.

More than his on-track successes, Valentino Rossi’s charisma has been the glue that’s cemented him in race fans’ hearts, together with his on-track speed, his race-craft and that domination he has shown in every class where he’s graced the grid. Rossi’s sense of humor and his rock-and-roll persona have made “The Doctor” a worldwide phenomenon. 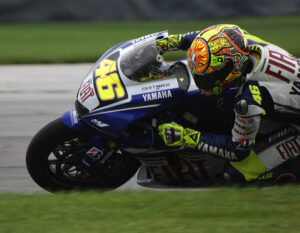 It’s fitting that Rossi made his decision known in Austria at the Red Bull Ring, as this is the venue where Vale earned his first podium in 1996. Still, the VR46 – his iconic racing number – will remain a key presence in the MotoGP paddock, adding a premier class team next season. His World Championships were secured with Honda and Yamaha – with a two-year, winless stop at Ducati – before returning to Yamaha and finishing his riding career with that manufacturer’s satellite team.

“First and foremost,” said Yoshihiro Hidaka, president and CEO of Yamaha Motor Co., Ltd., “I would like to take this opportunity to express my gratitude to Valentino for the great partnership we enjoyed with him. He will be deeply missed on track, inside the paddock and behind he scenes at Yamaha, but we fully respect his decision. There are too many great moments between Yamaha and Valentino to pick one as a favorite… there were also challenges throughout the years, but the trust between us never wavered and even strengthened our partnership,” he said.

Lin Jarvis, long-time managing director of Yamaha Motor Racing, expressed his sincere appreciation of the long association between the manufacturer and the rider. “Since 2004, we have completed – to date – 264 races. Together we secured 56 wins, 46 second places, 50 third places, and we won four MotoGP World Championship Titles in 2004, 2005 2008 and 2009, respectively.

“Valentino is a living legend whose successes and personal flair contributed to Yamaha’s legacy and heritage in abundance,” Jarvis continued. “During more difficult periods, his positive mindset would be a boost to those around him, and he was always ready to go the extra mile for a good result. It is thanks to his never-failing passion for MotoGP that we can proudly look back on soon-to-be 16 fantastic seasons together.” 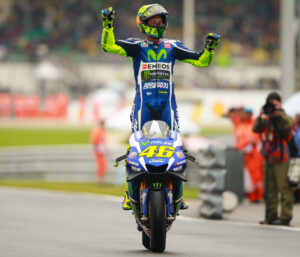 Unlike many competitive athletes, Valentino Rossi has been active in promoting his sport, in particular through his VR46 Academy and his ownership in Sky Racing Team VR46, currently competing in Moto2. That team intends to make the transition into MotoGP in 2022 with the owner its supporter in the paddock, rather than on the track. He had considered racing for his own team next year.

During the press conference announcing his departure from the MotoGP grids, Rossi noted, “I said I would take a decision for next year after the summer break, and I decided to stop at the end of the season. It’s a very sad moment because it’s difficult to say it and know that next year I will not race with a motorcycle. I’ve done that for, I think, more or less 30 years! Next year my life will change…

“But it was great. I’ve enjoyed it vey much. it’s been a long, long journey and it was really, really fun. I had a lot of unforgettable moments with all my guys, the guys that work for me. I had a very long career and fortunately I won a lot of races, but I have some moments and victories that are unforgettable. Pure joy. Some things where I laughed for a week, and after 10 days I’d still be laughing, wonder why and remember the race.

“It’s a difficult decision, but you need to understand… I think in the end in sport, the results make the difference,” Rossi explained. “So at the end I think it’s the right way. It’s difficult because I had the chance to race for my team in MotoGP together with my brother, something that I would like. But it’s okay like this I think… we have another half-season, I don’t know how many races, but I think it will be more difficult when we arrive at the last race. But for now, it’s just to say my decision to everyone. I can’t complain about my career!”

Nor can his multitude of fans complain about Valentino Rossi’s stellar trackside career. This writer has special memories of his 2008 season, when Rossi won both US Grands Prix, coming first at Laguna Seca and kissing the ground atop the Corkscrew turn at the California track, then winning in a ferocious thunderstorm at Indianapolis Motor Speedway three races later. Rossi’s superb riding will be missed by those of us addicted to MotoGP, but better to retire now before losing those skills that have served him so well over the past quarter-century.