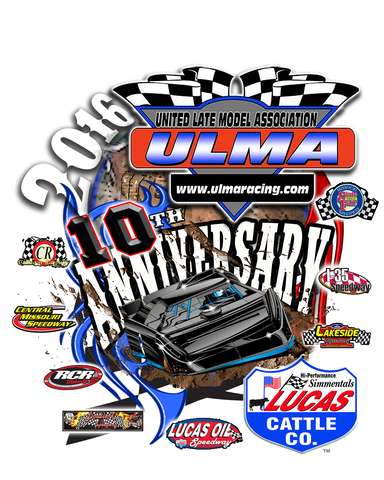 Three separate Lucas Cattle Company ULMA events were held over the weekend with three familiar faces making their way to victory lane. First, defending champion Jon Melloway secured a victory as he raced to his first win of the season on Friday at Callaway Raceway. On Saturday, Chris Smyser returned to victory lane at Randolph County Raceway for his second win of the year. Also on Saturday, Aaron Marrant became the first driver to win three events this year by dominating the field at Central Missouri Speedway.

ULMA action kicked off for the weekend in Fulton, Missouri on Friday. Melloway took the first preliminary heat race win over Chris Cox and Phil Edmondson while Todd McCoin scored the win in the second heat ahead of Dustin Hodges and Cody Holtkamp.

Melloway immediately came out in front during the feature event, taking an early race lead with McCoin following close behind. McCoin’s car went too high and took him over the embankment on lap two, relegating him to the tail of the field for the restart as Melloway then led Hodges, Holtkamp, and Cox on the restart and Melloway and Hodges quickly made it a two-car breakaway. By lap 12, the order of the field was Melloway, Hodges, Holtkamp, Cox, and McCoin, who eventually made his way back toward the front of the pack. On lap 13, Terry Wilson’s strong run came to an end as he retired to the infield. By lap 16, Hodges was running close with Melloway, but just didn’t have enough speed to make the push forward to take the lead.

Dave Miller brought out the last yellow with a single-car spin. Melloway was strong and pulled away fast on the ensuing restart to take the victory over Hodges, Holtkamp, McCoin, Cox, Edmondson, and Ashley Lancaster. Racing at Callaway will resume on Friday, May 13.

Next up was action at Randolph County Raceway for the second ULMA run at the track this season. Chris Smyser brought himself back to victory lane and gave his team owner Mike Crump and his family something to rejoice in when he drove to his second-consecutive RCR win.

Smyser crossed the finish line ahead of the Melloway brothers, David and Jon, who came in second and third. Cody Holtkamp and Chris Cox earned their second-consecutive top-five finishes of the season, finishing fourth and fifth. The top ten was rounded out by Devan Wiss, David Miller, Derek Wiss, Chris Cain, and Ashley Lancaster. ULMA racing will return to RCR Memorial Day weekend.

ULMA Late Models made their first appearance of the year at Central Missouri Speedway on Saturday with plenty of racing action. The racers competed in two heat races and a main event. The first heat was claimed by former ULMA and CMS Track Champion, Jason Bodenhamer, over Bobby Penney and Lane Ehlert. Aaron Marrant claimed the second heat win over Bob King and former CMS Late Model Champion Jon Binning.

The front row of the main event started with Marrant and Bodenhamer side-by-side for the 20-lap ULMA event. Marrant quickly asserted himself as the leader and sped out in front with Bodenhamer, King, and Ehlert. Marrant comfortably maintained his lead for a portion of the race until Bodenhamer started to close in on him. On lap 18, the first and only caution of the event came out for a single-car incident with Bob Cummings’ car stalling in turn four. With just two laps remaining in the race, Marrant’s car was on a rail as he sailed to his association-leading third victory of the year. Bodenhamer finished a strong second with King coming in third, Bobby Penney in fourth, and Phil Edmondson in fifth. The top ten was rounded out by Dustin Hodges, Jon Binning, Ehlert, Wesley Briggs, and Cummings. ULMA action will return to CMS on Memorial Day Weekend.