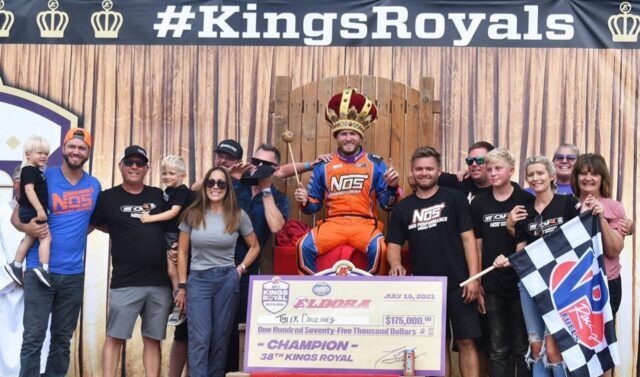 After the biggest win of his World of Outlaws NOS Energy Drink Sprint Cars career one driver has forever solidified his name in the record books. Although one of the biggest races of the year, the 38th  Kings Royal at Eldora Speedway, was delayed until Saturday that did not stop Tyler Courtney from achieving what many consider the unthinkable. The driver that most call Sunshine set the stage early on Saturday with a fifth-place qualifying effort and followed this up by winning the fifth Heat Race on Saturday, giving him the outside pole for the start of the 40 Lap Feature.

Following the wave of the green flag, Courtney powered his NOS Energy Drink #7BC around the outside of polesitter Justin Peck to take the race lead. Behind him, 36th Kings Royal winner Brad Sweet made quick work of David Gravel and Peck to take second down the backstretch. Despite the strong start, a red flag restart on Lap 2 put a dark cloud over Sunshine after the Wisconsin King Brad Sweet took the lead following the wave of the green flag. As the laps wound down it appeared as though Sweet would run away with yet another victory. That is until another caution flag flew for Lachlan McHugh’s flat right rear tire on Lap 19. As the field made laps, word came over the radio that Sweet had a cut right rear tire. As the NAPA Auto Parts #49 charged into the pit area the former King’s Royal champion’s hopes for a second victory seemed to fade away, which gave Courtney the opportunity that he was waiting for. So, when the green flag waved the driver of the NOS sponsored #7BC took off. Despite going three wide with Danny Dietrich and David Gravel several times throughout the closing laps of this race Courtney didn’t let anything stop him from holding the lead and taking it all the to a $175,000 payday.

“This is by far the biggest win in my career,” said Courtney. “I don’t think I have ever won a crown jewel like this before, and I really don’t know how to explain the feeling of excitement. It really sank in once we cleared the scales and went back through the pit gate there and the crowd cheered again… that really got me.”

Courtney’s win at Eldora Speedway was not only his first Kings Royal victory, and his first World of Outlaws NOS Energy Drink Sprint Car Series win, but it was also his first-ever appearance at the Kings Royal.

“That is why this victory just seems so insane and unheard of,” said Courtney. “It is definitely something that I will never forget.”

While Kyle Larson and Carson Macedo would race to the two remaining victories at Eldora, nothing was more impressive and remembered by more fans than that of first-time winner Tyler Sunshine Courtney.

The World of Outlaws NOS Energy Drink Sprint Car Series continues the “Month of Money” this week with three races against the PA Posse. The action starts at Western Pennsylvania’s Lernerville Speedway on Tuesday, July 20 for the $25,000/Win Don Martin Memorial Silver Cup, then Central Pennsylvania takes the stage with the $20,000/Win Summer Nationals at Williams Grove Speedway on Friday & Saturday, July 23-24. Stay tuned to RacingJunk.com for the latest news from the dirt!