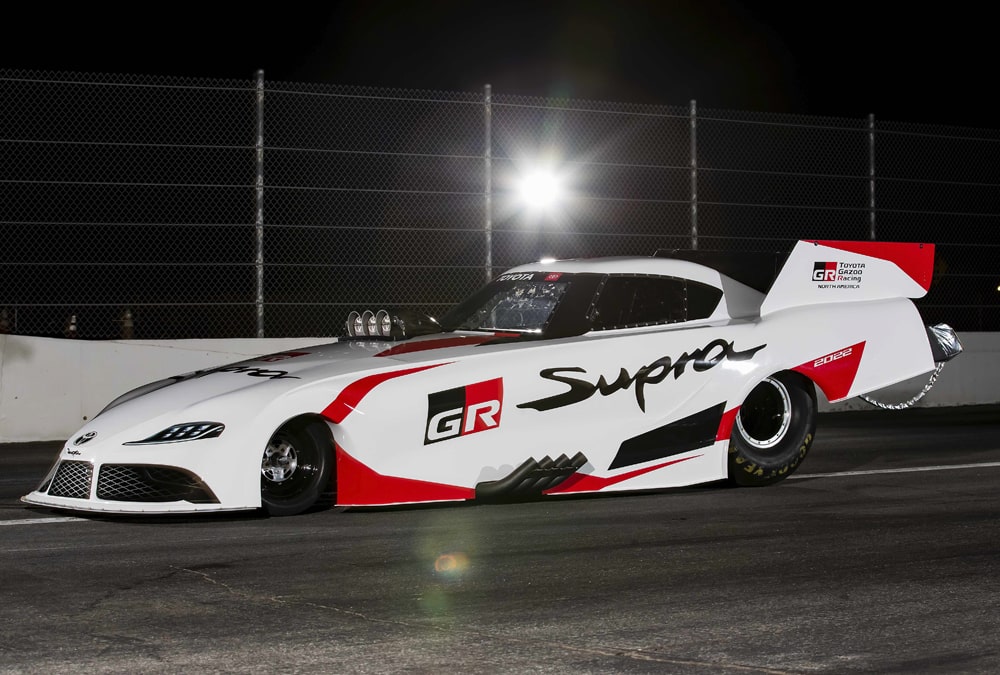 For 2022, Toyota is using its global motorsports banner — Toyota Gazoo Racing — for its North American efforts.

Toyota is marking a milestone in its motorsports affiliation with the National Hot Rod Association (NHRA), which sanctions the Camping World Drag Racing Series in which Toyota has both Top Fuel and Funny Car partnerships. The Japanese manufacturer first came to NHRA in 2002, dipping its toes into the drag racing world and learning how the series and its nitro-burning dragsters and full-bodied cars operate. it’s also making adjustments to its Formula DRIFT and GT4 partnerships.

In the last 20 years in NHRA, Toyota has learned about track preparation, tuning of these 11,000-horsepower monsters and how to keep them operating at optimal efficiency to make it a winner down a 1,000-foot racetrack. Toyota’s drag racing affiliations have been with teams and racers that are successful on the track and in their personal dealings with fans, cementing the ideology that this is not just a money game for Toyota, it’s a way to learn what works on the track and in the pits. And therefore, what works over the road. 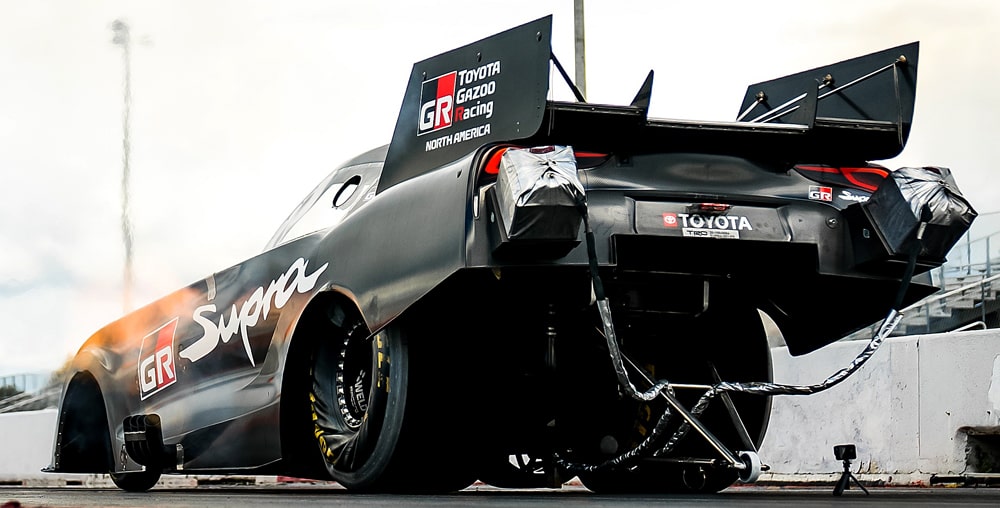 “The ability to showcase the GR family of vehicles on the race track and ultimately be a part of applying racing performance to production vehicles is something that we all strive for through motorsports,” Doleshal continued. “Showcasing the capability of our race enthusiast engineers to our new and existing fan base of enthusiasts is the overarching goal of the program.”

Toyota Gazoo Racing, in all of its exercises, competes to allow Toyota’s engineering teams the ability to push vehicles to their limits on the track, whether in NHRA Top Fuel (look for reigning, consecutive four-time champ Steve Torrence’s new Toyota partnership), Funny Car or in Formula DRIFT, where Fredric Aasbo is the reigning titleholder after earning the 2021 championship in a GR Supra and in IMSA and SRO GT4. This competition ultimately creates better engineers and stronger, more proficient road vehicles. Toyota’s performance sports cars, led by GR Supra, are built by enthusiasts in the trade, looking to deliver excitement to fans of both the road cars and of Toyota’s motorsports activities.

In Formula DRIFT, Toyota drivers will compete in both the GR Supra and the GR86 in 2022; GT4 drivers in IMSA and SRO field the GR Supra GT4. In placing the GR badge on all of these cars, Toyota is showing its dedication to producing race-inspired road-going vehicles, capable of surviving grueling paces of both development and on-track performance to earn that GR badge.

Fans can enjoy the start of this year’s NHRA Camping World Drag Racing Series on February 20th at Auto Club Raceway in Pomona, California. California is also the site of the 2022 Formula DRIFT season starter, kicking off April 2nd in Long Beach. GT4 competitors are first on the track this year, as IMSA begins its season at Daytona International Speedway January 29th. SRO competition starts as an undercard to the NTT INDYCAR SERIES season opener on the streets of St Petersburg, Florida on February 25th.

About Anne Proffit 864 Articles
Anne Proffit traces her love of racing - in particular drag racing - to her childhood days in Philadelphia, where Atco Dragway, Englishtown and Maple Grove Raceway were destinations just made for her. As a diversion, she was the first editor of IMSA’s Arrow newsletter, and now writes about and photographs sports cars, Indy cars, Formula 1, MotoGP, NASCAR, Formula Drift, Red Bull Global Rallycross - in addition to her first love of NHRA drag racing. A specialty is a particular admiration for the people that build and tune drag racing engines.