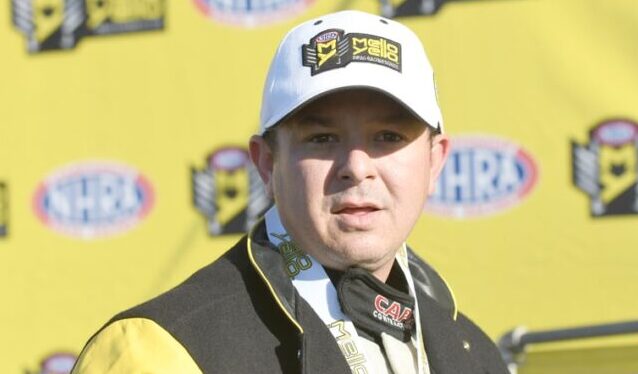 NHRA has taken action against the activities of reigning two-time Mello Yello Top Fuel champion Steve Torrence, whose outburst against first-round opponent Cameron Ferre at top end was captured on television and by photographers at the scene.

When Ferre deep-staged him, pulling in farther to beat the staging beam and, perhaps gain an advantage, the ploy was not to Torrence’s liking. As the duo approached one another for the traditional handshake after their competition, where Ferre easily out-dueled the champ on the tree (.072 – .142), yet fell behind at the 1,000-foot mark, posting 4.040/294.82 to Torrence’s 3.734/327.82, things got a bit overheated.

Torrence pushed Ferre at the head and it took Torrence’s Capco Contractors team members to separate them before things got even more combative. As he came down the return road to prepare for the quarterfinals Torrence was roundly boo’d by fans in the stands. They did the same thing for his next two appearances. And at the Winner’s Circle.

Although not witnessed here, it’s been said Torrence apologized to Ferre at the close of his competition. He also sounded quite sincere in his Monday night apology as he claimed his second consecutive world title in the dragster category.

Still, a maelstrom of antipathy against the 36-year-old Texan progressed throughout this week. NHRA had said they would examine their options and see if they believed a penalty was in order. By Friday afternoon, they’d decided a penalty needed to be handed down.

At that time a statement was produced: “The following action has been taken against Steve Torrence regarding an incident that occurred during the Auto Club NHRA Finals at Auto Cub Raceway at Pomona on November 17, 2019, regarding an altercation with a fellow competitor. Torrence publicly apologized for his conduct at the season-end awards ceremony on November 18, 2019.

“Torrence has been fined twenty-five thousand dollars ($25,000) and must complete anger management sessions. The fine will be dedicated to enhancing the capabilities of the Safety Safari. The action is appealable.”

One can hope Torrence will accept this slap on his wrist and do the anger-management course as required. While it’s easy to understand the heat of the moment when his title is on the line, surely Torrence has been deep-staged before in his career? And been able to control himself when it occurred?

About Anne Proffit 913 Articles
Anne Proffit traces her love of racing - in particular drag racing - to her childhood days in Philadelphia, where Atco Dragway, Englishtown and Maple Grove Raceway were destinations just made for her. As a diversion, she was the first editor of IMSA’s Arrow newsletter, and now writes about and photographs sports cars, Indy cars, Formula 1, MotoGP, NASCAR, Formula Drift, Red Bull Global Rallycross - in addition to her first love of NHRA drag racing. A specialty is a particular admiration for the people that build and tune drag racing engines.

3 Comments on Torrence Receives His Penalty from NHRA