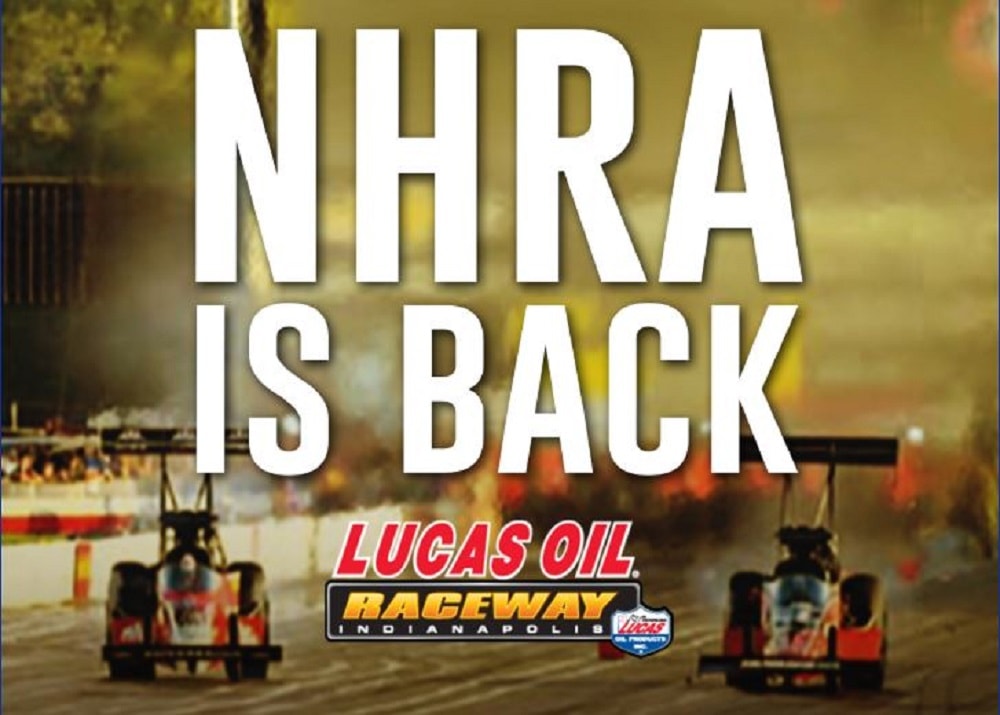 After one of the longest pauses in the history of the sport, the warriors of the NHRA’s Mello Yello Drag Racing Series has gone from complete silence with no burnouts, staging or fans cheering to revving engines and the hard charging competition that so many of us have missed since the start of the COVID-19 pandemic. The return to Lucas Oil Raceway outside Indianapolis, with limited fans and drivers in attendance, this weekend may have been a bit different than what others have witnessed in the past, but this didn’t stop the fierce racing battle that ensued for three well-known drivers. Beginning with the father of two-time world champion Steve Torrence, Billy Torrence, who would use his return to racing to become a six-time winner in NHRA’s premier division following a narrow side-by-side win against Doug Kalitta in Sunday’s final round of the E3 Spark Plugs NHRA Nationals in Indianapolis. The Torrence family would not be the only racing clan to prove that the recent long break was just what they needed to pull off impressive wins. As two-time Funny Car champion Matt Hagan took down teammate Tommy Johnson, Jr. in Sunday’s final round, despite his supercharger exploding before the finish line, Hagan became the third Don Schumacher Racing driver to go three-for-three at Indy. After announcing his plans to retire from driving in the Pro Stock class at the end of the 2020 season, Jason Line was also blessed with more than a return to the 2020 season, but also a long-awaited victory before hanging up his racing helmet for good. After a runner-up at the season opener in Pomona five months ago, Line collected career Pro Stock win No. 51 at the E3 Spark Plugs NHRA Nationals when he stopped longtime rival Jeg Coughlin Jr. in the final round. 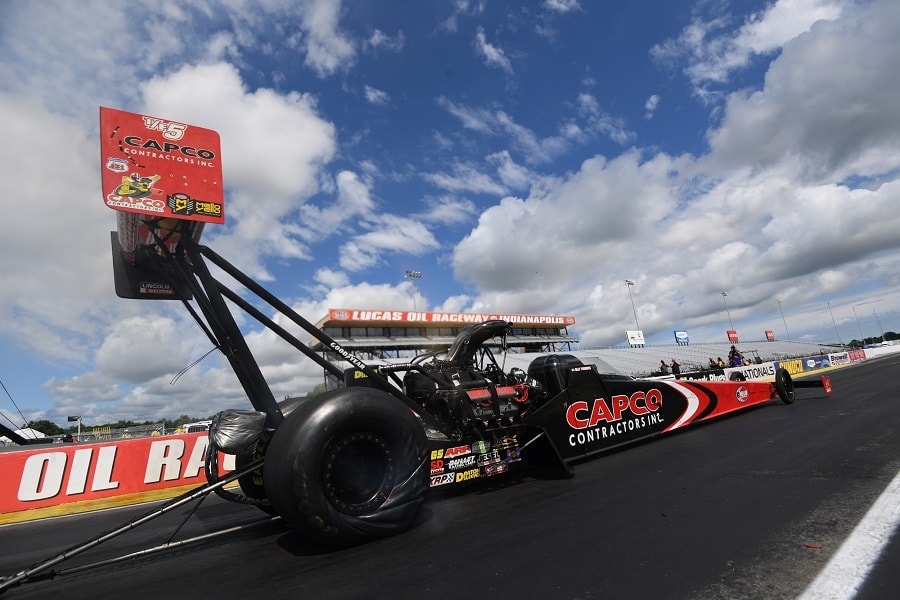 Although the busy Texas-based construction company owner does not compete in all of the NHRA’s racing events due to his busy schedule, the senior member of the Torrence racing clan became one of the most impressive drivers of the weekend after guiding his Capco dragster into the field in the No. 6 spot following a 3.859-second run on Saturday afternoon. As the sun rose on Sunday’s final rounds, Torrence’s Capco team seem to receive just the spark that they needed to lead the way with a 3.758-second run in his round one win against Luigi Novelli. Torrence was also just a second behind this when he took down Terry Totten in the second round. Following this up with wins against T.J. Zizzo and Shawn Landon, Billy Torrence would once again line up for the hardest battle of the weekend against his son Steve. While most would expect the younger world champion son to become the final victor in this one on one battle, Steve would smoke the tires, which would send his father, Billy Torrence, to his eighth career final in just 50 starts.

“What an awesome win for my Capco boys,” said Torrence. “We need to foremost thank the good Lord for being out here as a family and being able to enjoy the freedom to come out here and drag race and God Bless America. Thank you so much.” 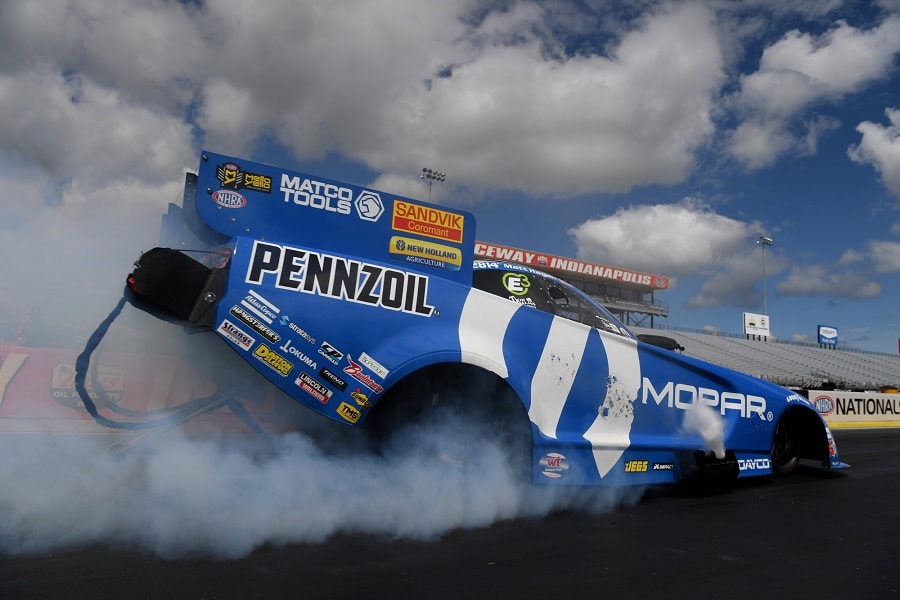 Torrence would not be the only legendary driver to pull off an impressive win in Indy. After qualifying in the top spot at the first two races of the season, Don Schumacher Racing driver Matt Hagan had little to show at the beginning of his return to racing weekend at Indy. Despite this, the two-time champion quickly rectified his rough start by winning his 34th career Funny Car title at the E3 Spark Plugs NHRA Nationals at Indy. Entering Sunday’s eliminations as the No. 6 qualifier, Hagan stopped Daniel Wilkerson and then survived a close wheel-to-wheel battle against teammate Jack Beckman in the quarterfinals.

Hagan then drove to a 3.95-second pass against Tim Wilkerson to move onto the final round against teammate Tommy Johnson Jr. While Johnson was also solid on Sunday against an 18-car field, in his John Collins-tuned MD Anderson Cancer Center Dodge, Hagan pulled off an impressive final round win despite his engine exploding going across the finish line.

“I am all good, following that scary finish,” said Hagan. “I just had some parts come up there and tag me pretty good, but I have been kicked by cattle harder than that anyway. We are so glad to get back to doing what we love with both the NHRA and fans in the stands. Thanks to Mopar, Pennzoil, Sandvik and all the folks that made this whole weekend possible. I just cannot say enough about these guys. They are my family.” 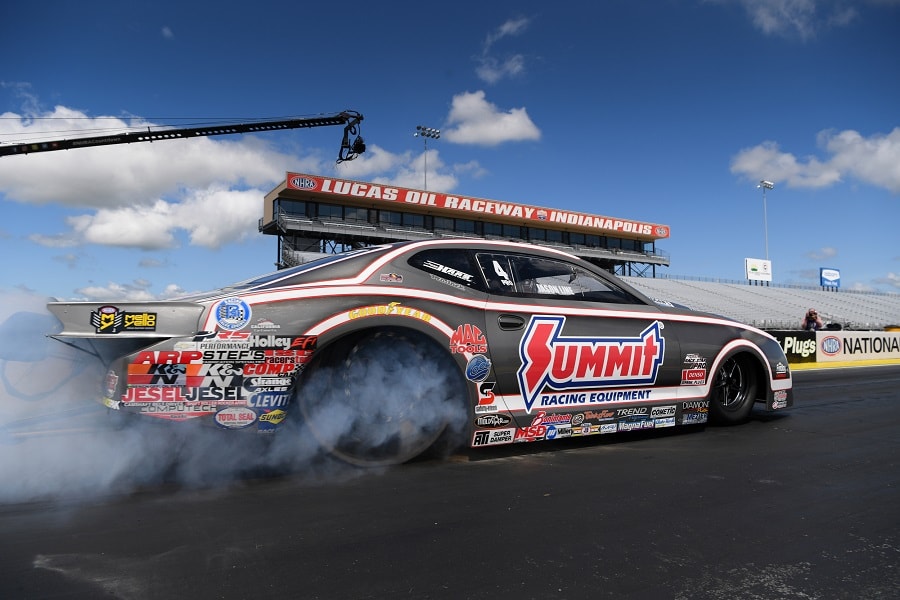 On Sunday, Line was just as consistent on Sunday with runs of 6.61, 6.62 and 6.60-seconds in his wins against Alan Prusiensky, Alex Laughlin, and KB Racing teammate Greg Anderson before moving onto Sunday’s final against longtime rival Jeg Coughlin Jr. Appearing in his 104th career Pro Stock final of his career, Line got off the starting line cleanly and drove his Summit Camaro to a 6.647-second pass to top Coughlin’s 6.658.

“I wish I could see my dad’s face right now because he is big into streaks and it was important to him that I win at least one race every year that I am in Pro Stock and we got it done this weekend at Indy,” said Line. “I want to thank Greg Anderson, who worked his tail off the whole time we have been off to give me a solid ride.”

The return to the 2020 NHRA Mello Yello Drag Racing Series season continues at the Lucas Oil Raceway at Indianapolis in its second run in Indianapolis, on July 18-19, 2020. Stay tuned to RacingJunk.com for all of the continued return to NHRA racing coverage!