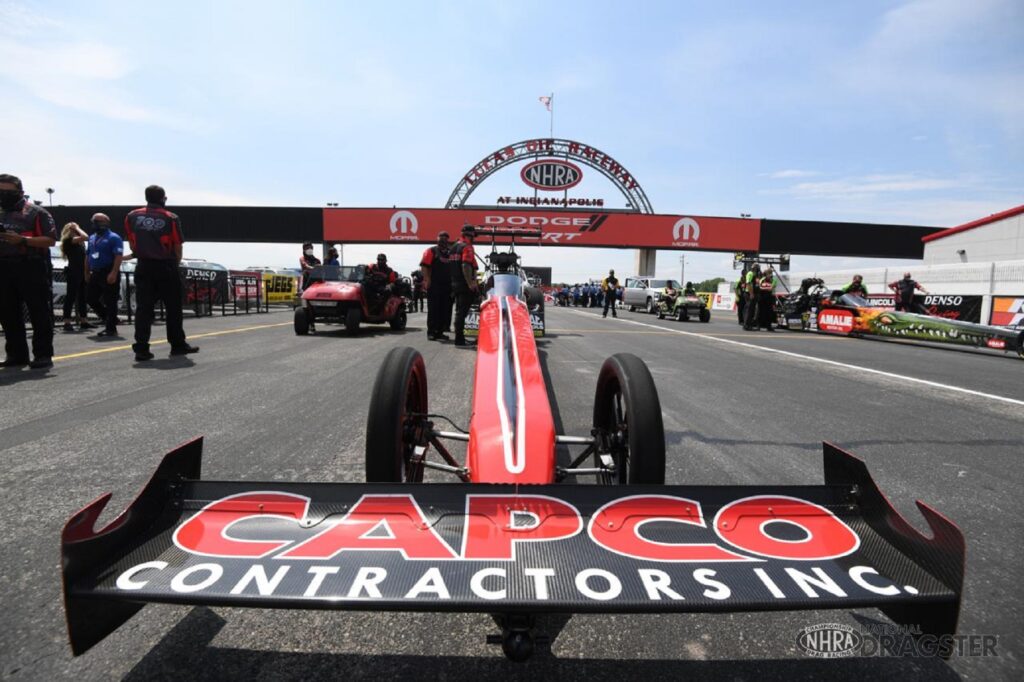 Torrence Earns Back to Back Victories at Indy, While Capps & Coughlin Earn First Victories of the Season at Dodge NHRA Indy Nationals. As the champions of the National Hot Rod Association got back to racing at what seems like the chosen track this season, one driver would fight for back to back wins at Lucas Oil Raceway while two drivers would earn their first victories of the season. Steve Torrence’s drive to win his second race at one of the premier drag racing venues in the world would occur after he would take down low qualifier Terry McMillen in Sunday’s final round. Although Torrence would earn back to back victories, Don Schumacher Racing’s own Ron Capps would earn his first victory of the season, after struggling with back-to-back round one losses at the first two Indy races, by taking down Toyota Racing’s own J.R. Todd in Sunday’s final round. As he prepares to finish up his time in the Pro Stock class this season, Jeg Coughlin Jr. obviously was not ready to give up his winning ways after the five-time champion took down his nephew Troy Jr. in Sunday’s final round. 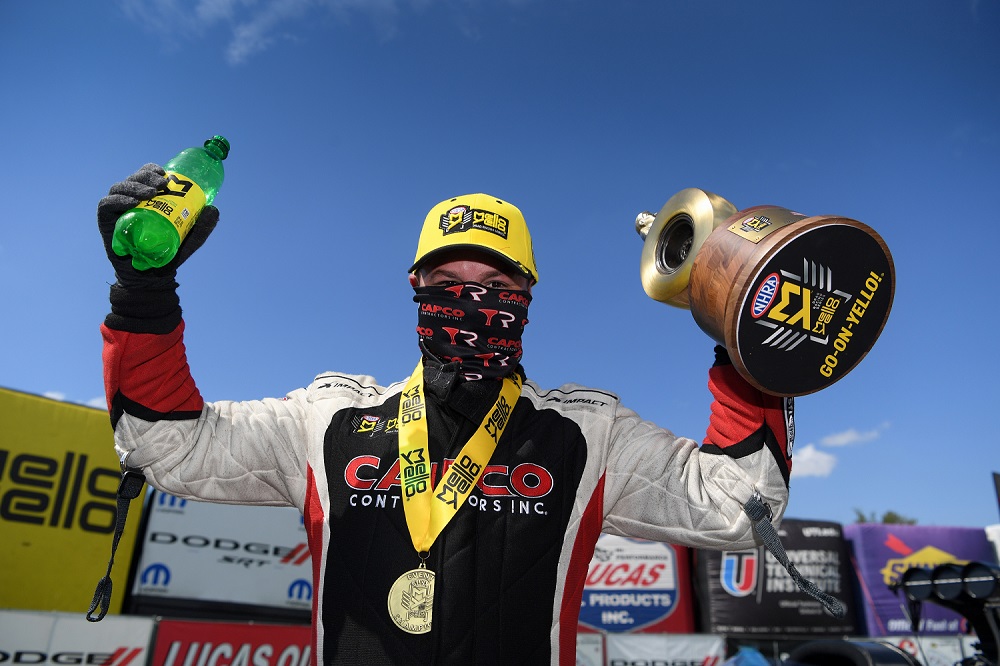 Before reaching Sunday’s final round, Torrence would race to a No. 2 qualifying position after which he would take out Luigi Novelli, Justin Ashley, and Leah Pruett to reach the final round against this weekend’s lowest qualifier Terry McMillen. Despite McMillen’s strong start to the weekend at the Dodge NHRA Indy Nationals presented by Pennzoil, the hard charging driver seemed to feel the low qualifier curse at Lucas Oil Raceway at Indianapolis in Sunday’s final round after McMillen was clearly distracted on the starting line and left nearly two-tenths behind Torrence. This obviously made a victory look easy for Torrence. That is until the Capco dragster driver began to smoke the tires, which would eventually turn this race into a pedal contest that eventually ended when McMillen’s engine let go in a ball of fire just before the finish line.

For Torrence, this win was his 38th as a professional and second victory of the season.

“This win almost seemed impossible because I ain’t the best at peddling one of these things, but I try to do my job regardless,” said Torrence. “Thankfully, we went out there and knocked the tires off and we are once again heading home with another Wally. I cannot thank all the guys at Capco for supporting us and making this possible.” 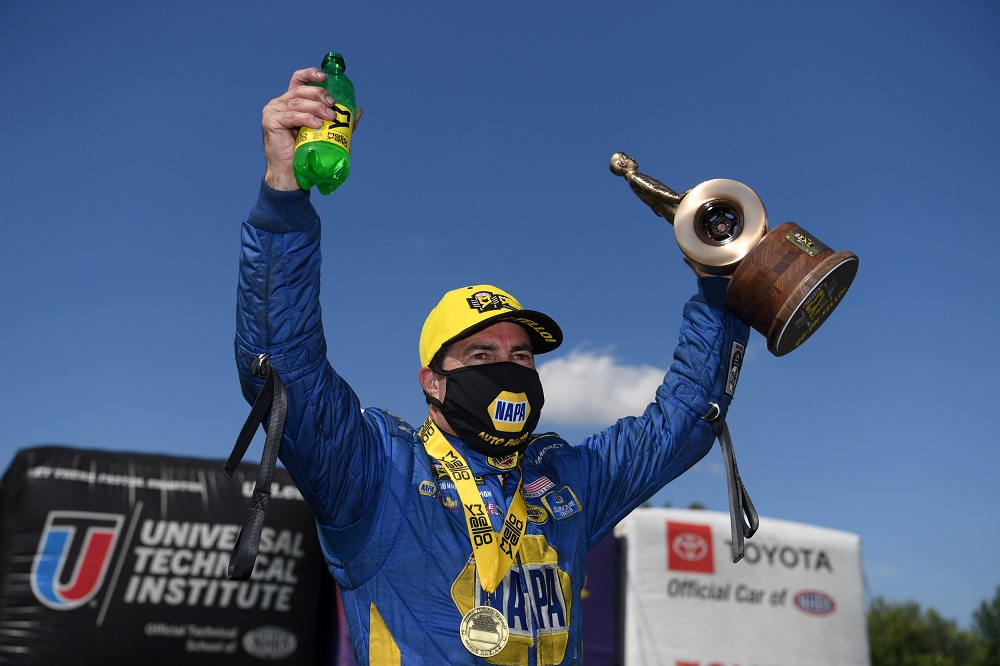 While Torrence would earn back to back victories at Indy, Don Schumacher Racing driver Ron Capps would race his way out of a victory slump during Sunday’s final round against J.R. Todd. In claiming his first win since the Brainerd event nearly a year ago, Capps came from the No. 3 qualifying spot to post round wins against Tim Wilkerson, Blake Alexander, and Bob Tasca III before taking on J.R. Todd in Sunday’s final round.

Following these victories Capps would finally get the opportunity to hold an NHRA Wally trophy since his win at Brainerd nearly one year ago after lighting up the scoreboard with a 4.110-second finish in Sunday’s final round where J.R. Todd smoked the tires on the starting line and failed to hold down a real challenge against the driver who has now won 65 times in 124 final rounds.

“This win feels so amazing,” said Capps. “We have been coming here for 23 years and I do not think that I have ever won at this track. So, to now say that I am a driver that has won at every track on the circuit tells you the talent that is around me and I am so proud to drive this race car.” 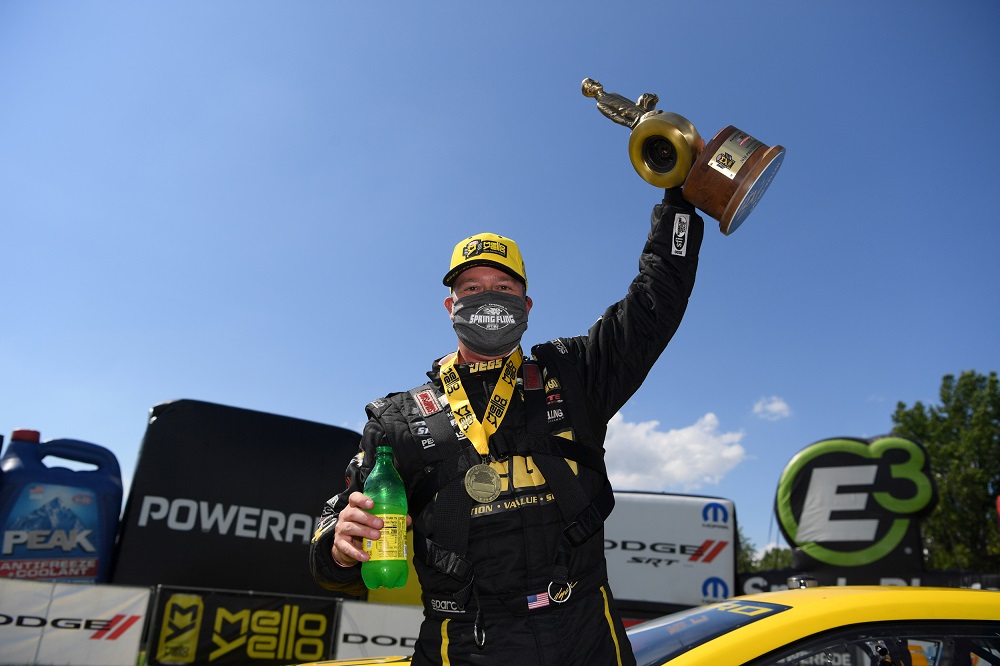 Capps would not be the only driver to earn his first victory of the season at Indy. As he prepares to leave the Pro Stock class at the end of the 2020 season, Jeg Coughlin Jr. has spent a lot of time grooming his nephew, Troy Jr., to be his successor in the factory hot rod class. That is after the five-time champion showed his young protégé how a hard-fought victory is won.

Driving his Elite Motorsports-powered Camaro, Coughlin came from the No. 3 qualifying spot to post victories against Val Smeland, Alex Laughlin, and longtime rival Greg Anderson before moving to Sunday’s final round against his newly groomed family member. In a historic all-Coughlin final round, Jeg Jr. earned the victory at the Dodge NHRA Indy Nationals presented by Pennzoil with a 6.68 after Troy shook the tires and shut-off. It was Coughlin’s 65th Pro Stock victory in his 114th final round. All told, Coughlin has 84 victories, tying him with Tony Schumacher for eighth place on NHRA’s all-time wins list.

“What a weekend,” said Jeg Jr. “Troy Jr. has been a student of this spot since he was a kid and I have loved having him come with us week in and week out whether we are pro racing or bracket racing he was always a study. I knew I would have my hands full with him in the final without question because he has been knocking the tree over and we have been pretty good in old yeller, but he is a serious challenger.”

The return to the 2020 NHRA Mello Yello Drag Racing Series season continues at the NHRA Southern Nationals at Atlanta Dragway on August 28-30, 2020. Stay tuned to RacingJunk.com for all of the continued return to NHRA racing coverage!

About Ellen Richardson 435 Articles
Ellen Richardson is the author of Behind The Wheel for RacingJunk.com. This automotive sports junkie has a passion for telling an athlete's story while also covering various racing activities. Find out more about her at ellennrichardson.wordpress.com or follow Ellen on Twitter at @ellennrich or Instagram at elnrich33.