“I know most people don’t ever get the opportunity to run Top Fuel,” Palmer said. “Let alone run this class with a car that can legitimately win rounds and contend for race wins. It’s one thing to come out here and get a car down the track and have some fun. It’s another thing altogether to have a car that can consistently run in the 3.70s.

“Adding Jason to the mix shows we’re serious about what we’re doing. He knows how to go fast and since we basically run a slightly more conservative version of Steve (Torrence’s) tune-up, which Jason already knows from all his time with Richard and Alan Johnson over the years, we’re very hopeful this is going to enhance our program.” 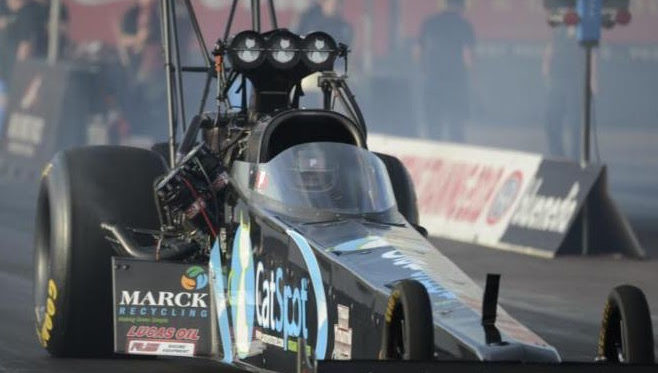 After getting to the finals the first time of his career earlier this year in Phoenix, Palmer credits team sponsor Tommy Thompson for his meteoric rise to contender status. Thompson, a drag boat racer from Oklahoma, owns CatSpot Organic Litter, an all-natural, environmentally-friendly, biodegradable cat litter made entirely from coconut. CatSpot Organic Litter recently announced title sponsorship of the Seattle race.

“I have the best sponsor in drag racing, period, no doubt about it,” Palmer said. “Tommy is my friend, a fellow racer and the most genuine guy I’ve ever met. When we first got together he said he wanted to help us win. He doesn’t give me a budget; whatever I need, he gets it for me. His only request is that we stay true to ourselves and have fun. He doesn’t want a big, corporate race team. He likes it the way we are.

“I’m an optimistic guy by nature, and I feel that more so now than ever before because I see what we’re doing on the track. We turn on win lights now. People know they have to run hard to beat us. The last few times we’ve lost it’s by thousandths of a second, not tenths. We don’t have to go into races hoping for the other car to smoke the tires anymore. We go into races saying, ‘let’s go.'”

Palmer and the CatSpot Organic Litter crew have become crowd favorites this season. The blue-collar team pulls their car into pit row when they warm up so more fans can gather around and enjoy the process and they always whack the throttle a few times to let people feel the power of their nitro-burning engine. In the evening, they open their pit to fans and invite them to have a look at a real Top Fuel team.

“We love the fans,” Palmer said. “Those are our kind of people. Heck, I was on the other side of the ropes many times. I know what it’s like. We just want everyone to have fun.”