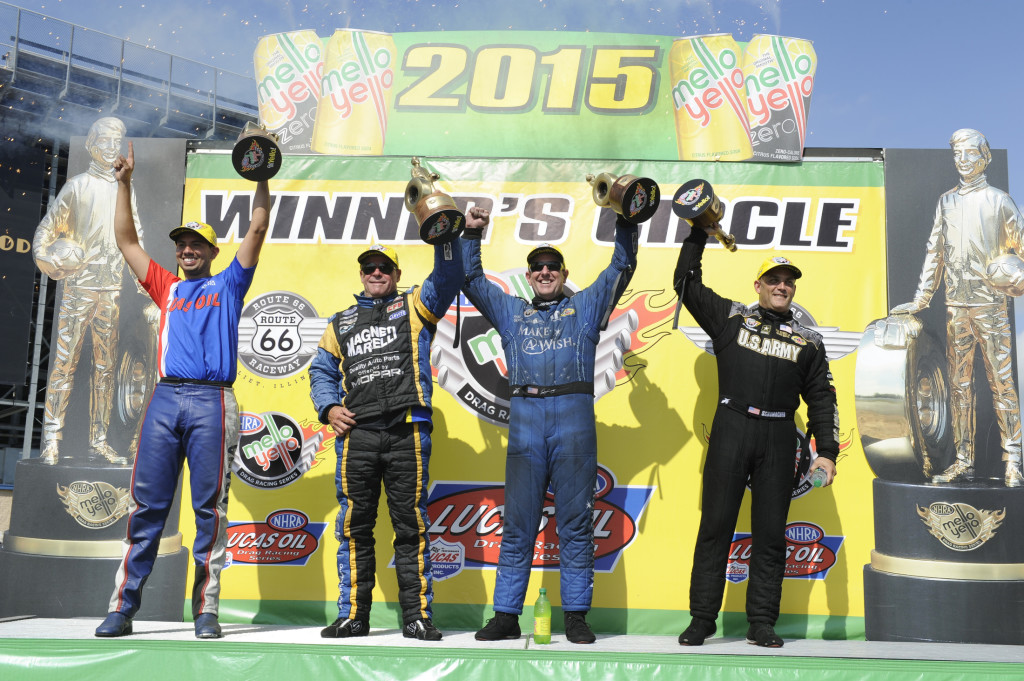 Tony Schumacher and his U.S. Army team continue to break records with every new win and beating longtime rival, Larry Dixon, in the finals at Route 66 Raceway was the perfect way to conclude his Chicago homecoming with family and friends.  The Sarge clicked the clocks in 3.844 seconds at 320.20 mph, beating Dixon for the 14th time in a final.

“Winning here is always sweet,” said Schumacher, who lived in Chicago for 45 years prior to relocating to Austin, TX last summer.  “This place is special.  I have so many family and friends here.  To win another one for my dad is always special.  There is so much emotion in this for me.

“We had to go out first round and try to beat T.J. Zizzo, who has given DSR cars fits the past couple of years.  Then we had to survive a pedalfest with J.R. Todd to reach the semifinals.  It was hot, the sun was beating down, and the pressure was on.  I’ve said for years that this U.S. Army team will always be known for coming up big when the pressure is the highest.”

Schumacher defeated Zizzo with a 3.787 ET, 324.36 mph in the opening round, and then had his hands full when both Todd and Schumacher lost traction, giving fans a pedalfast race.  Then, he beat Dave Connolly on a hole-shot to reach his fifth final of 2015 and seventh of his career at Route 66 Raceway.

The win also pushed Schumacher into the lead in the Top Fuel point standings.  He’ll carry a 20-point advantage over Antron Brown in the three-race NHRA Mello Yello Drag Series Western Swing that begins in two weeks in Denver. 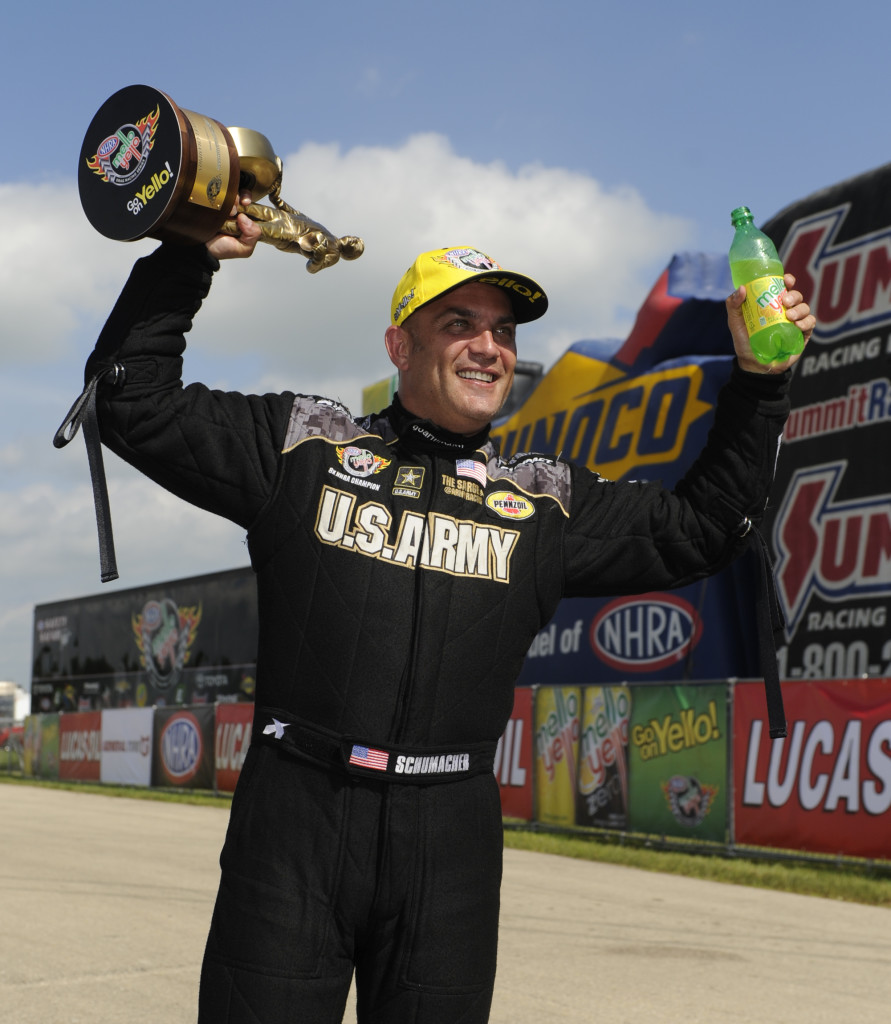 The Chicago win is Johnson’s 11th nitro win and his second with DSR, taking the Bristol title last year.

“You know, some days, you just get up and feel it,” said Johnson, who is No. 6 in NHRA’s Mello Yello Drag Racing Series Funny Car points.  “You know you’re going to win.  I woke up this morning and thought that we’ve got the car to beat; we’re going to win this race.  You feel like you know it, and that it’s right.  Our Make-A-Wish Dodge has been a really good car in terms of performance; we just couldn’t get the breaks to go our way.”

Johnson was in something of a mini-slump at the two most recent events on the tour and exited in the first round at both Bristol and Norwalk, but on Sunday in Chicago, there was a whole new story to tell.  Starting from the No. 4 position, he beat Brian Stewart, teammate, Jack Beckman, and Cruz Pedregon in the semifinals.

The semifinals win sent Johnson to the 27th nitro final round of his career and 22nd in the Funny Car category.  Johnson was out of the gate first with a .066 to Hagan’s .073, and as his teammate and competitor went up in tire smoke just after the launch, Johnson skated ahead to take the win light with 4.259 seconds at 245.27 mph.

“You know, I make a lot of wishes, and this one came true,” said Johnson, who secured his spot in the NHRA Traxxas Nitro Shootout with the win.  “Our car spun the tires in that final round down track and nosed over, and the next thing I knew it had pushed the pugs out and it was on fire.  It finally quit running as I went past the finish line, and then lifted.  It was the final round; I wanted to get there however I could.  You have to seize those moments.” 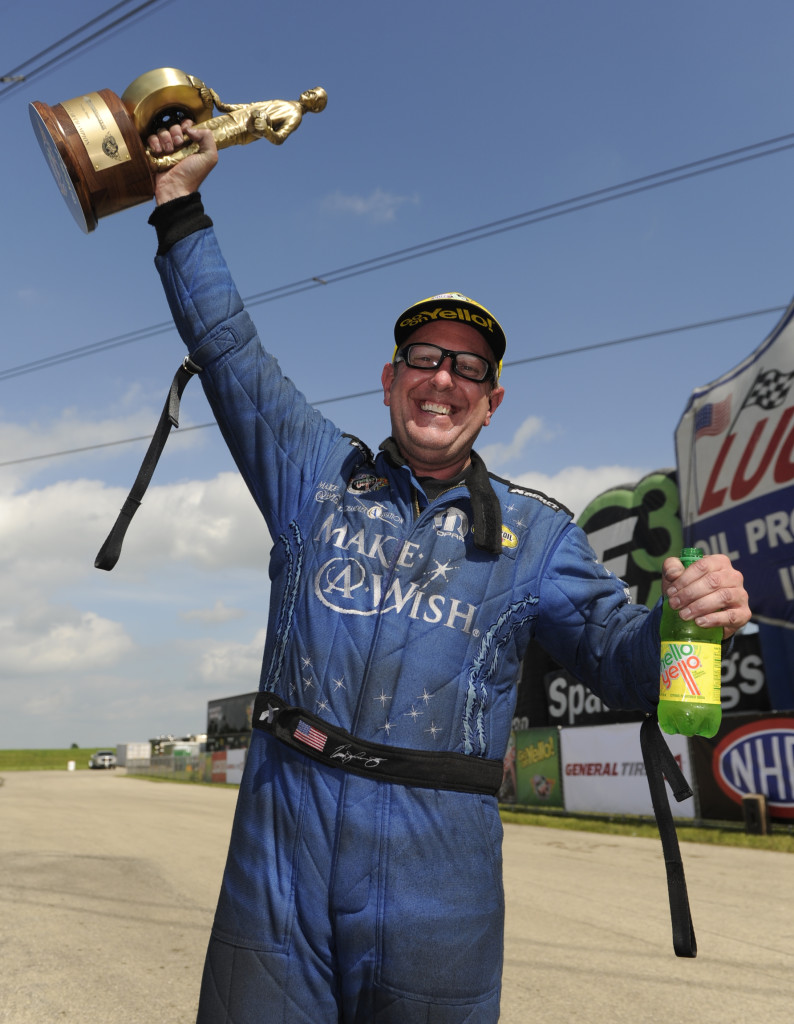 Allen Johnson’s well-earned Pro Stock win was the 25th of his career, and came as a relief after flirting with two recent runner-up finishes, finally brought an end to the nearly year-long drought since his last victory at the 2014 Mopar Mile High Nationals.

“I had confidence coming into Chicago, but this will give us even more confidence for the Western Swing and namely the Mopar Mile High Nationals,” said Johnson, who has sixth wins in eight years at the upcoming nationals in Denver, Colorado, and is working towards a fourth consecutive win for Mopar’s signature event at Bandimere Speedway.

“There were lots of positives today,” Johnson added.  “25 wins is just unbelievable and to be put in the record books with some of the top racers in this class forever is an honor.  It’s also my first win here and one of the few tracks I’d never won at, so that’s another little notch in our Mopar belt.  Hopefully we can build on this and turn up the heat on it for the rest of this year.

The next two round wins showed just how hungry the Mopar driver was to get back to winning form as he used holeshots to defeat both Chris McGaha and Pro Stock points leader Greg Anderson.  In Johnson’s third final round appearance of the year, he once again had the starting line advantage against Larry Morgan and then led all the way to the finish with a time of 6.624 seconds, 209.99 mph run over his competitor’s 6.667 ET, 210.18 mph pass.

“The Mopar team has really been digging the last three or four races and we pretty much have a handle on the issues that plagued us to start the year,” said Johnson, who jumps from seventh to fifth in the Pro Stock standings with Sunday’s efforts.  “We’ve struggled more at the start of this season than I think we have at any time in the last ten years, but we’re finally back to where we should be.” 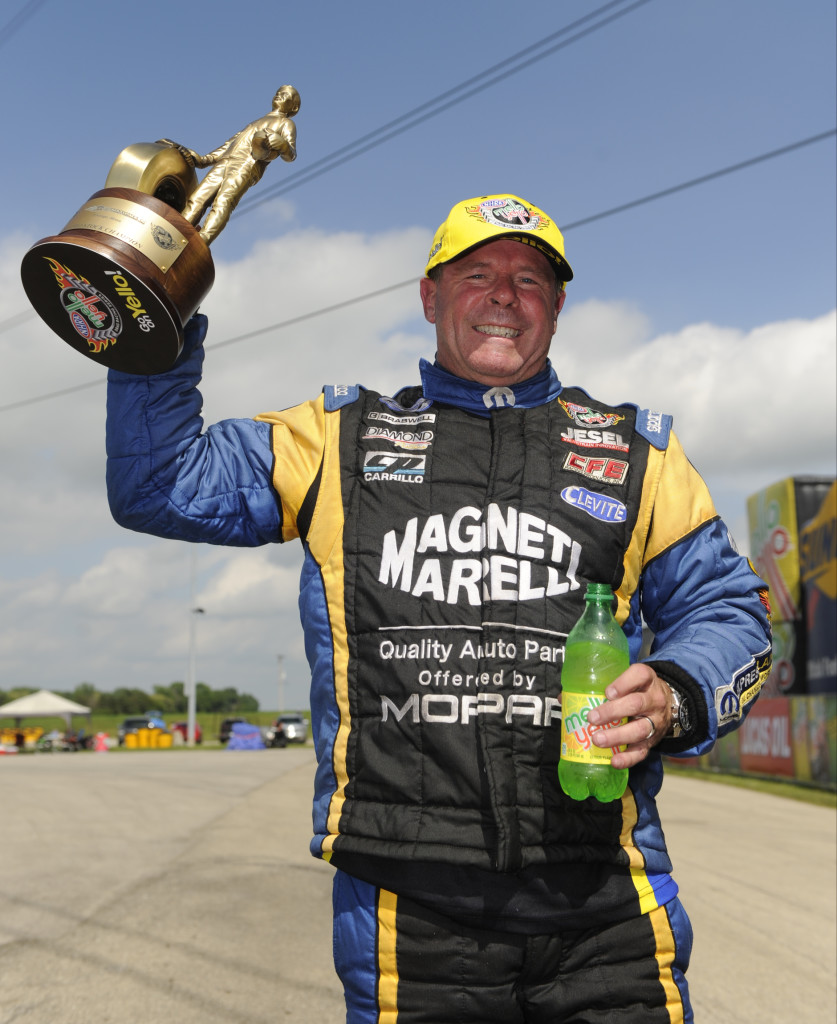 In Pro Stock Motorcycle, Hector Arana, Jr. defended his Chicago win from last season with a time of 6.918 seconds at 194.66 mph on his Lucas Oil Buell, defeated two-time world champ Matt Smith in the final.  The win was Arana, Jr.’s 10th career victory, first of the season and second at Route 66 Raceway.  He defeated LE Tonglet, Jerry Savoie and Chaz Kennedy before taking Smith out in the final.  He now sits second in points.

“This is one of my favorite tracks,” Arana, Jr. said.  “We had the bike and I knew we had the bike all weekend, but we couldn’t get it to leave the line well and we finally figured it out for the last qualifying session.  We made a change and we felt good about it, so we didn’t change anything for the first round and from then on out we didn’t touch it.  We just went consistently down the track.”

Drivers will have a weekend away from the track to prepare for the NHRA Mello Yello Drag Racing series’ annual three consecutive race “Western Swing” that begins with the Mopar Mile High Nationals at Bandimere Speedway near Denver Colorado, the 14th of 24 events from July 24-26 before stops in Sonoma, California, and Seattle, Washington. 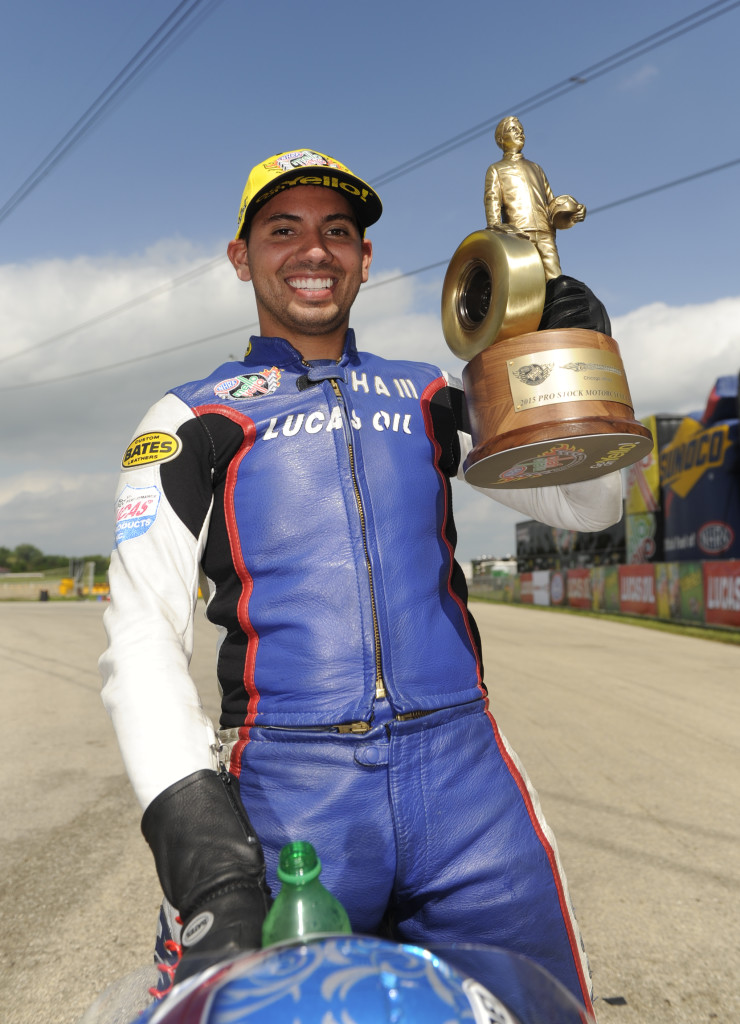