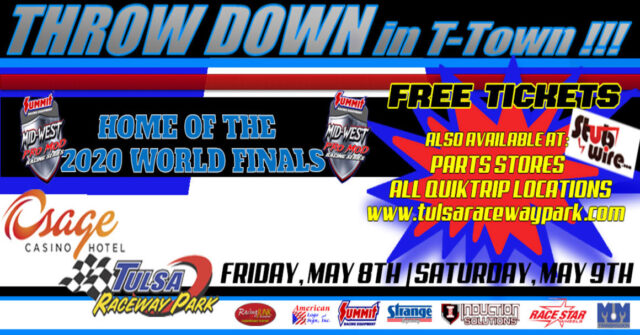 Osage Casino Hotel Tulsa Raceway Park’s “Throw Down In T-Town” is always a highlight of the drag race season, a chance for Pro Mod, Drag Radial, and Door Slammer drag racers to show their stuff in front of an adoring audience. This year’s event, which combined the Throwdown with the Mid-West Pro Mod Series season opener,  was certainly no exception despite the the country’s current crisis.

Racing has been on hold all over the country as shelter-in-place orders have shuttered tracks and closed doors, but states are beginning to open up and Tulsa Raceway is leading the way, providing an example for how tracks, spectators and racers can work together to adhere to stricter health and safety guidelines and still throw a heck of a race.

“We were very lucky,” explains Tulsa co-owner Keith Haney. “We were always slated to be part of Phase 1 of (Tulsa’s) re-opening, and knew what we’d need to do to accommodate the restrictions.”

This meant figuring out how to move a number of in-person aspects of a big race to digital platforms.  Already a leader in utilizing the digital space for ticket sales and broadcasting, Tulsa Raceway was able to pivot to exclusive online registration and W9 submission.  An app was used for time slips, and ticket sales were encouraged on line.

“In addition, we made sure that health and safety regulations were in place for the racers and spectators,” explained track co-owner and operator Todd Martin. “Staff wore masks, odd-numbered staging lanes only were used, and crew presence was limited to the starting line. ”

“We were allowed to open at 50% capacity,” said Haney, “But we aimed for 25% and accommodated about 35% capacity. People were excited to see racing again.”

“We had about 200 race cars,” said Track Manager Jimmy Boles. “With about 100 more who wanted to run, but we needed to limit it.”

The event itself went off without a hitch, including the Pay-Per-View for those who wanted to watch at home.

“The event went absolutely perfectly,” said Haney. “There were only two accidents and neither resulted in driver injuries.”

The addition of the Mid-West Pro Mod series opener to the event meant that there were also some superstars signed up to run in that event as well as Pro Street and X275, including Street Outlaws Stars Murder Nova Shawn Ellington, “Daddy Dave” David Comstock, Chuck Seitsinger, and Plan B Micheal Henson and Kallee Mills debuting KONG!. In fact, Comstock took home the Pro Street win.

Drivers offered up fierce competition and satisfying wins across the classes as this weekend of racing set the stage for what the sport will look like in the future.  Pro Mod racer Aaron Wells raced to victory, as did Jimmy Lewis in Top Sportsman.

“Every race track and organization was watching us to lead the way, and we feel like we were able to do this the right way. We recognize we’re setting the stage for the best way to get back to normal,” says Martin.

In fact, the event garnered the attention of not only three separate local news stations, but CBS national news as well, allowing Tulsa to show the race community, and the rest of the sports and live entertainment hungry country, how it can be done in a responsible, professional and exciting way.