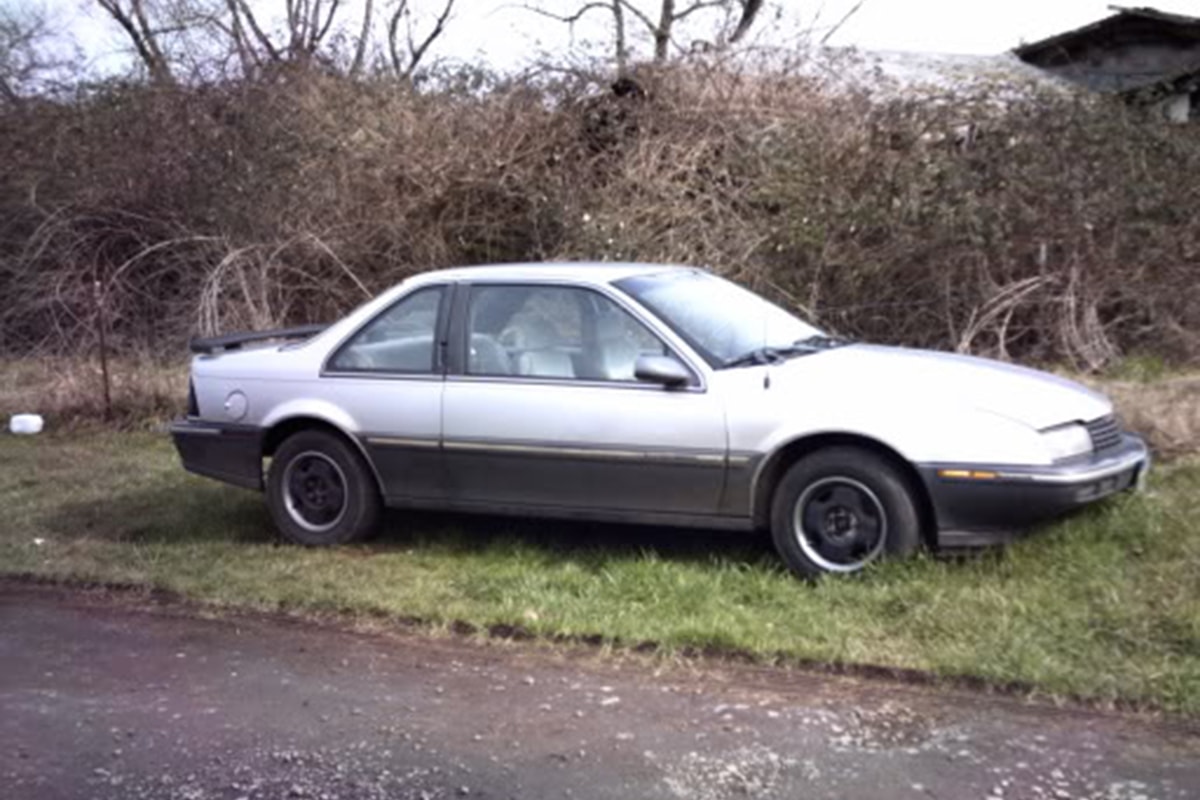 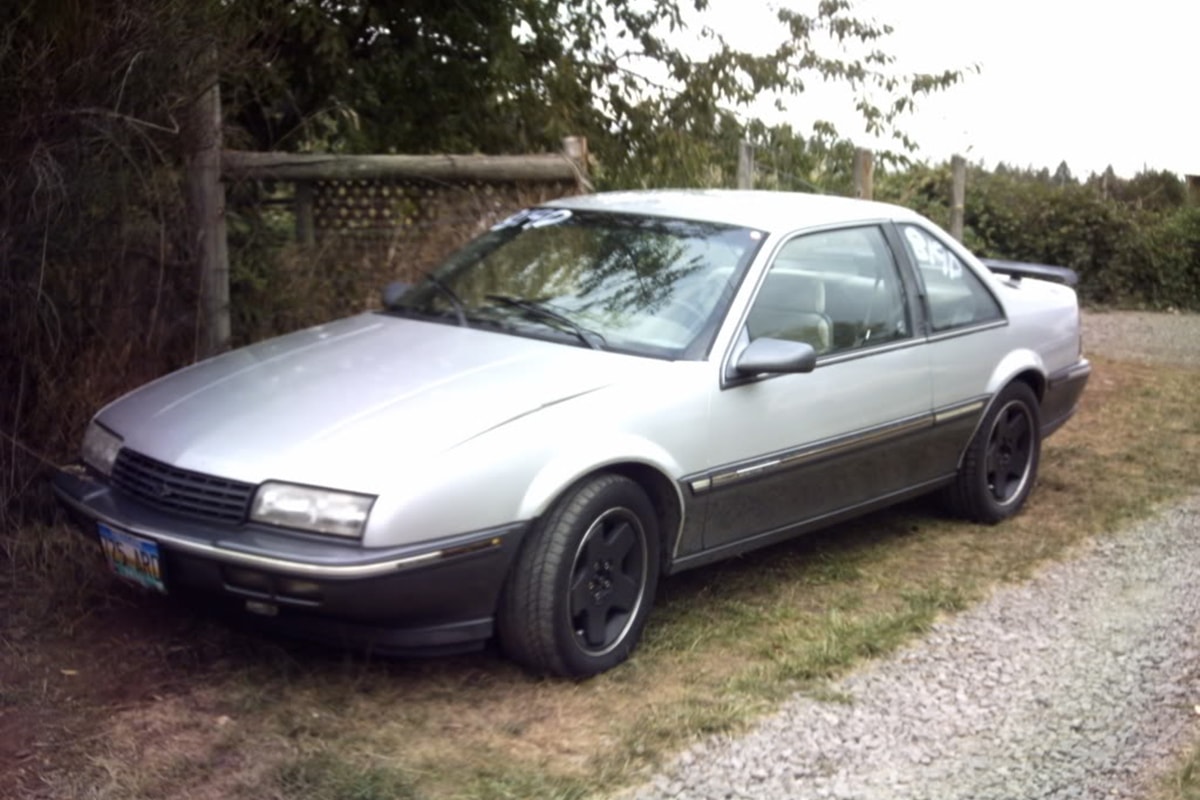 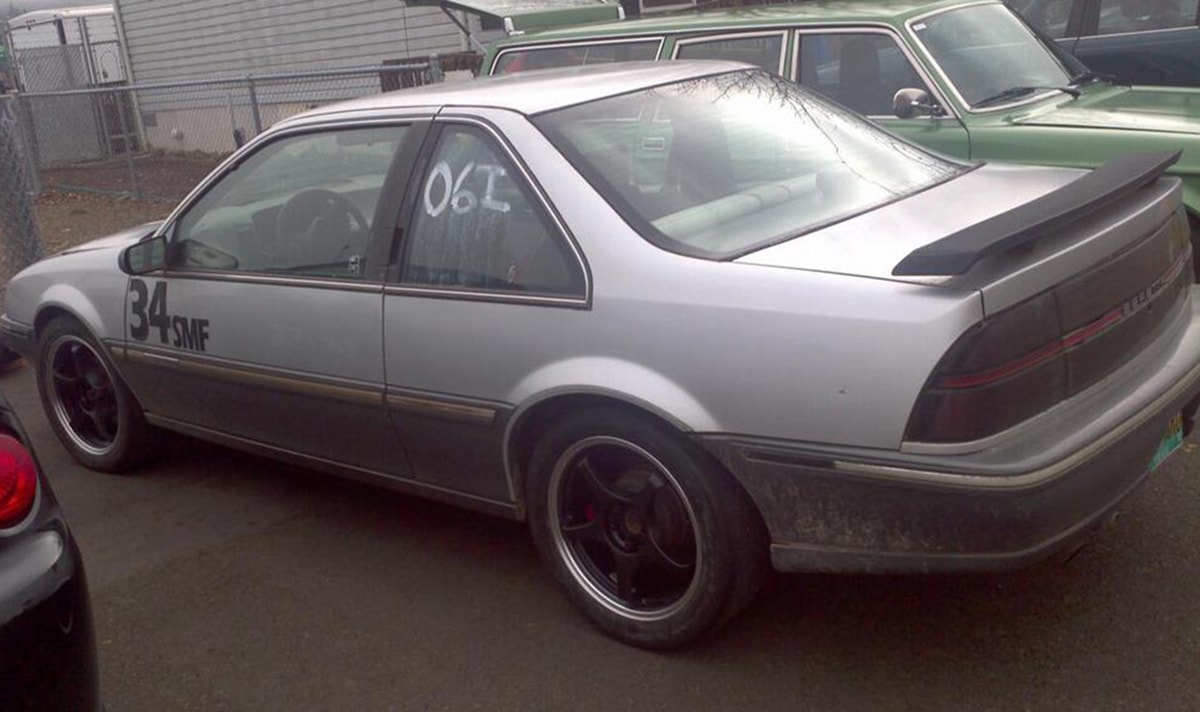 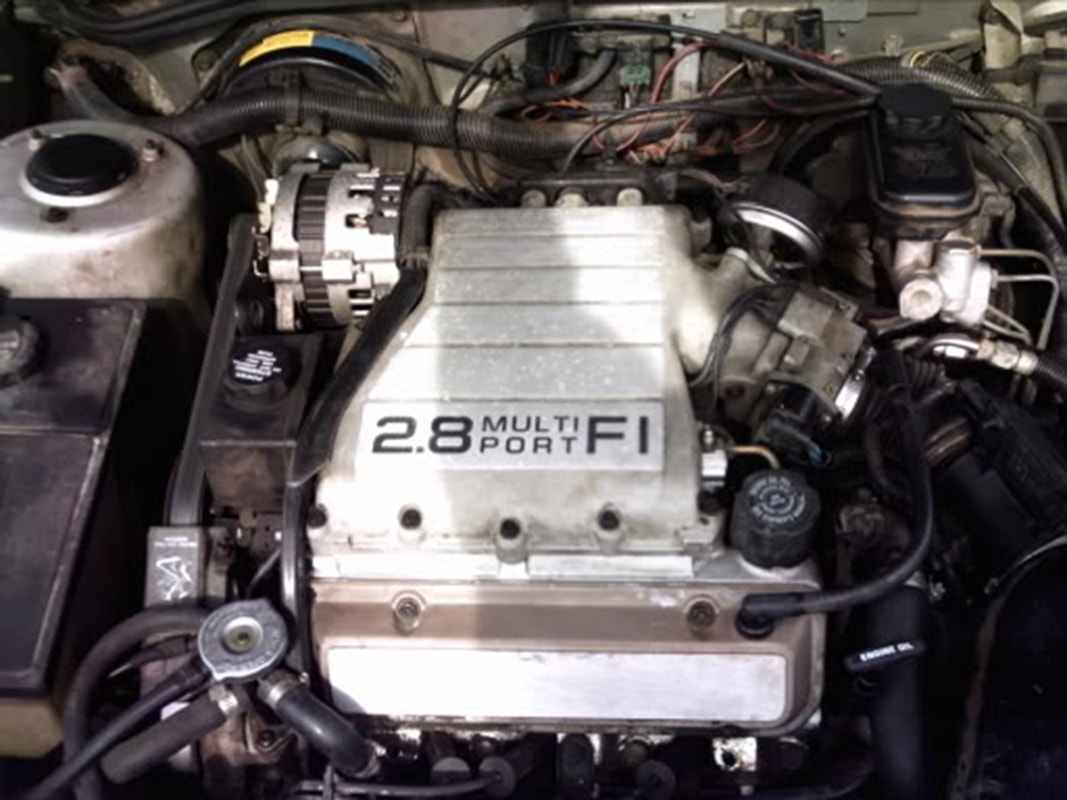 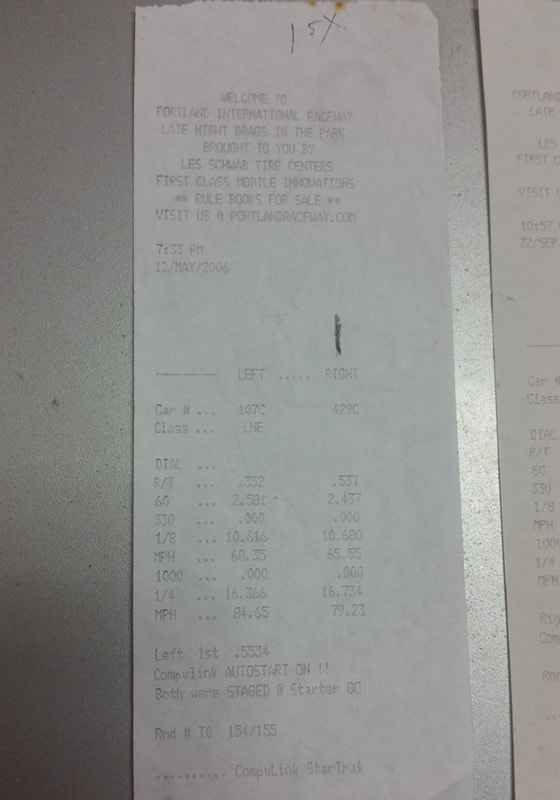 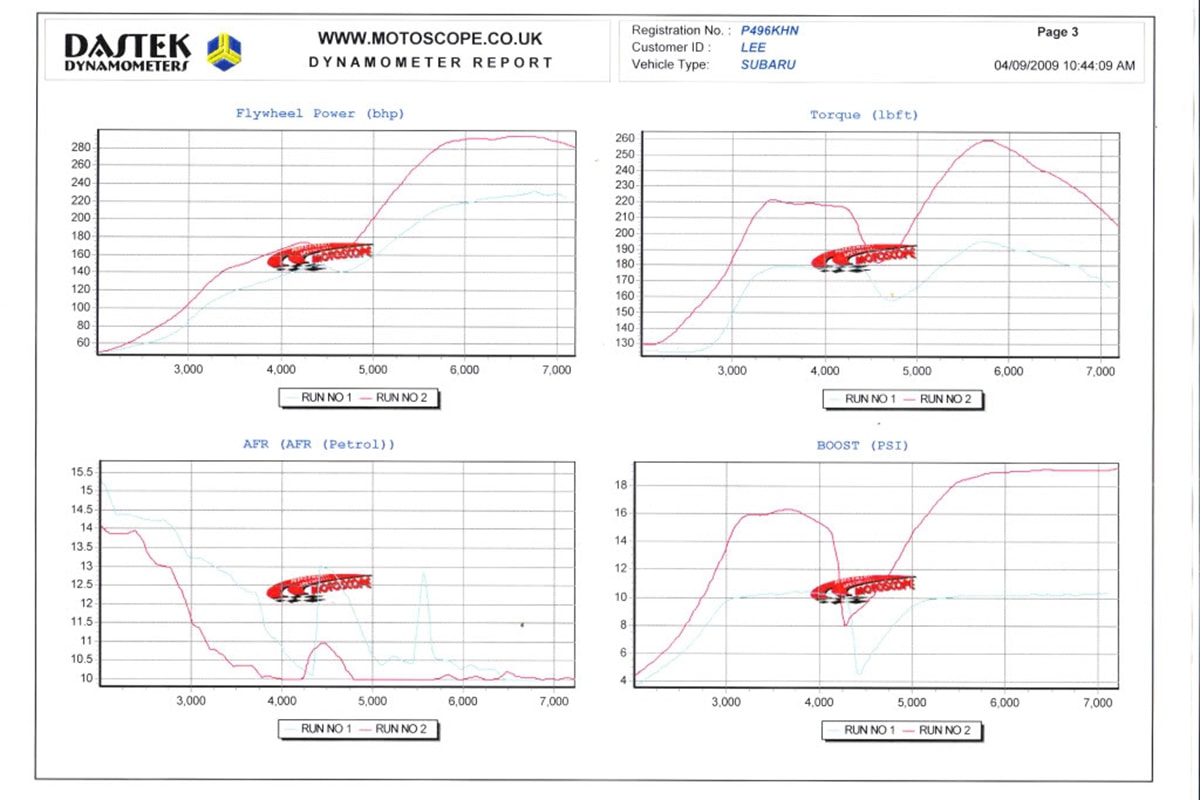 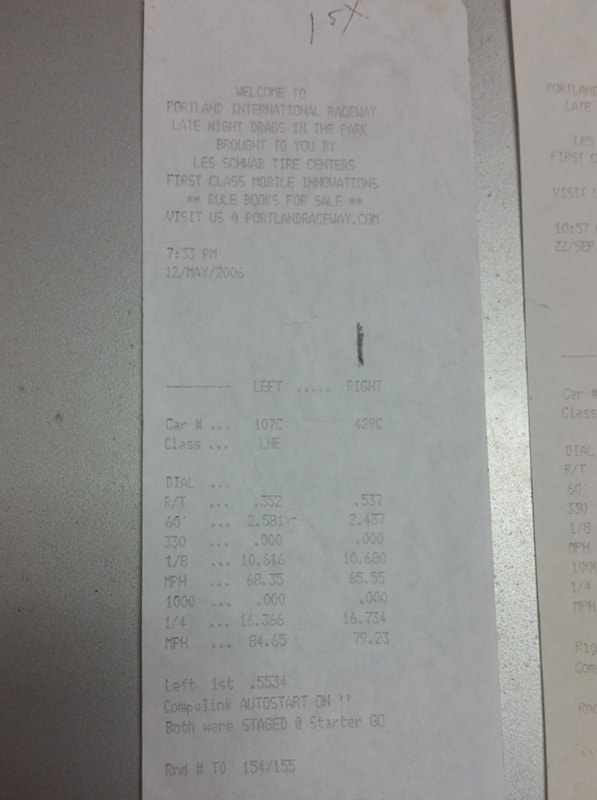 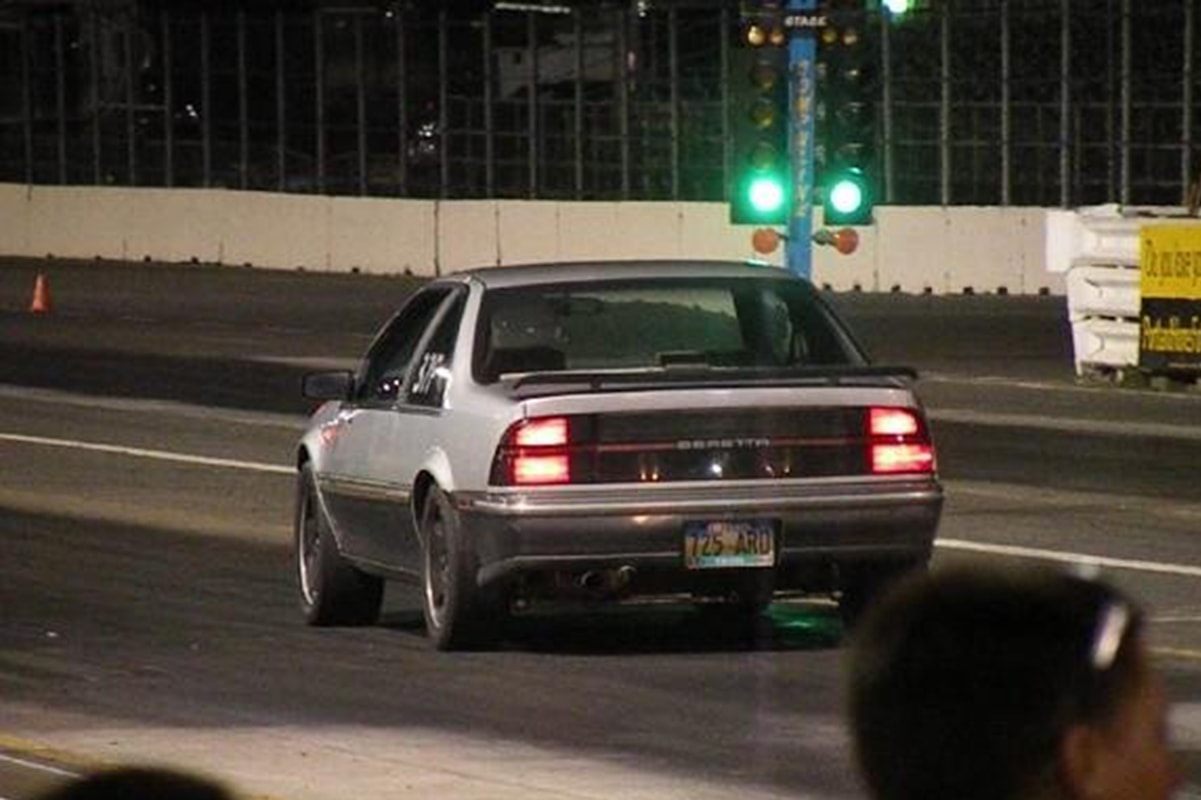 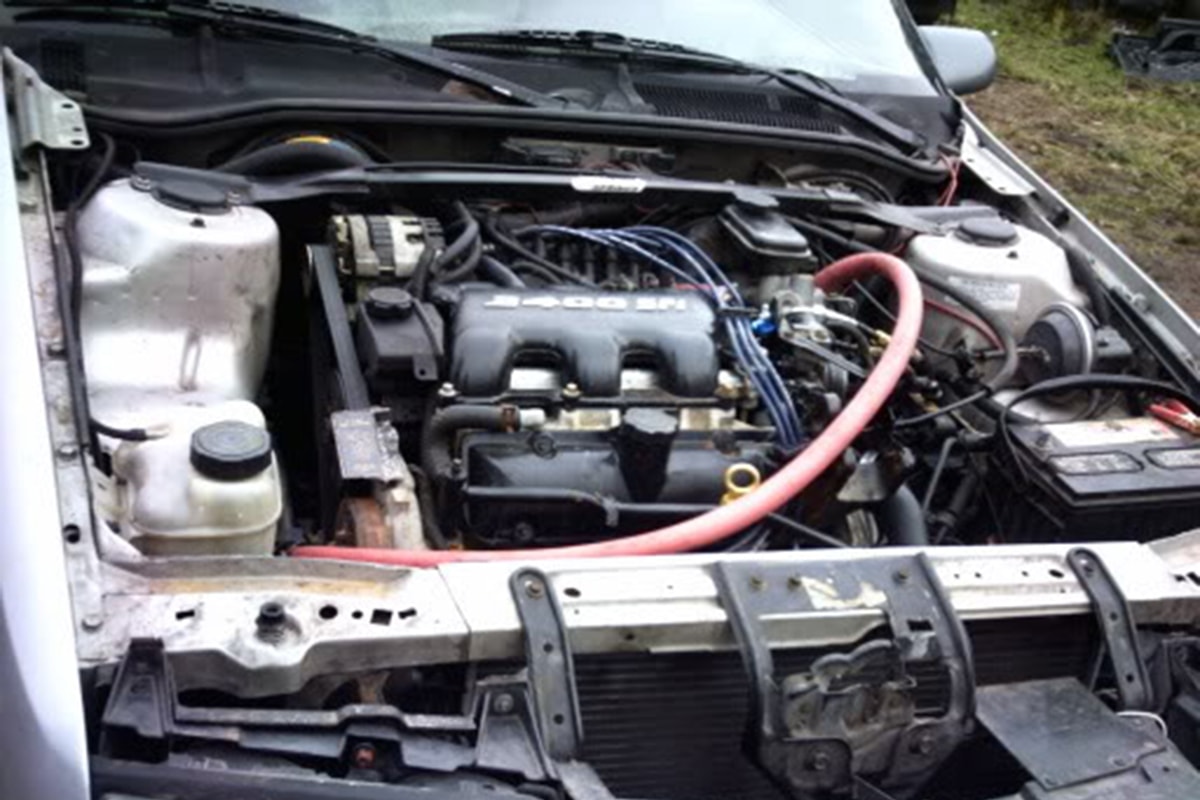 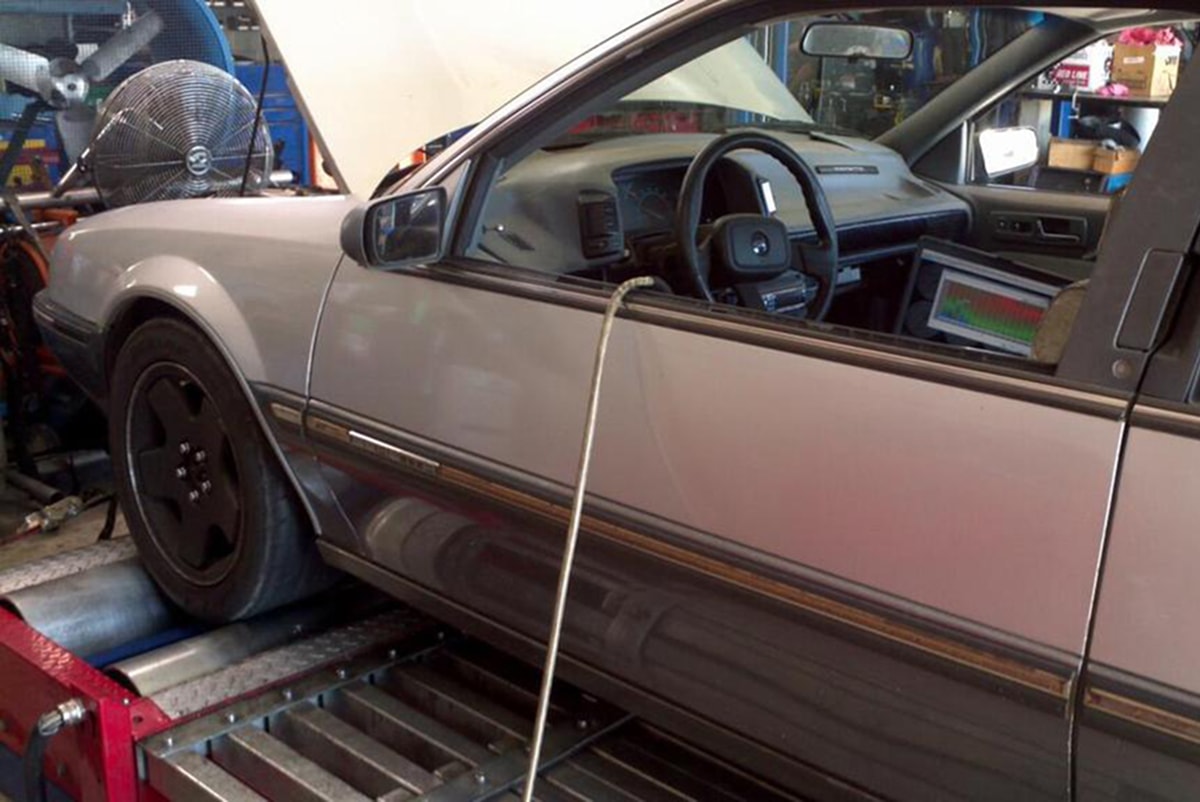 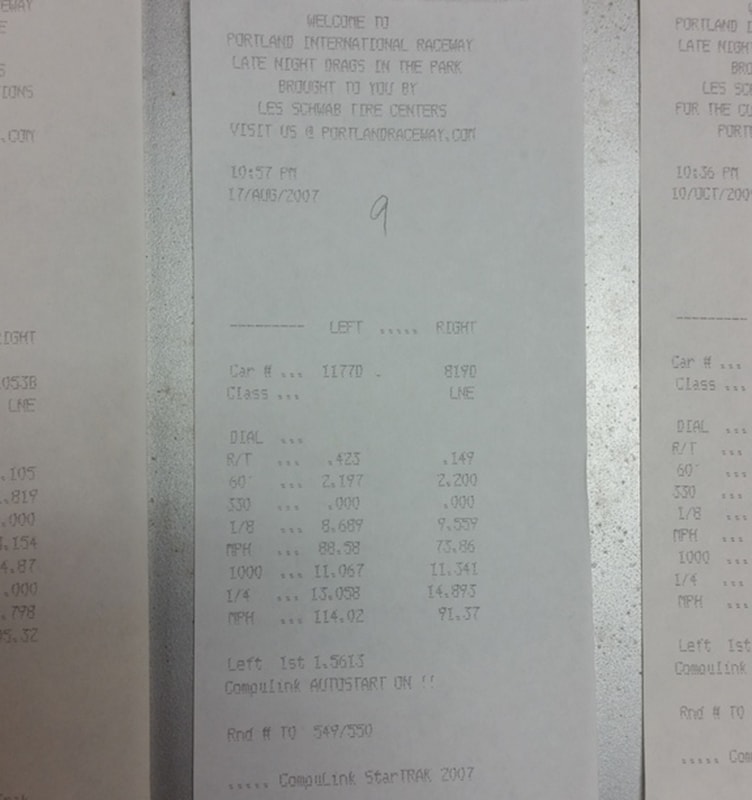 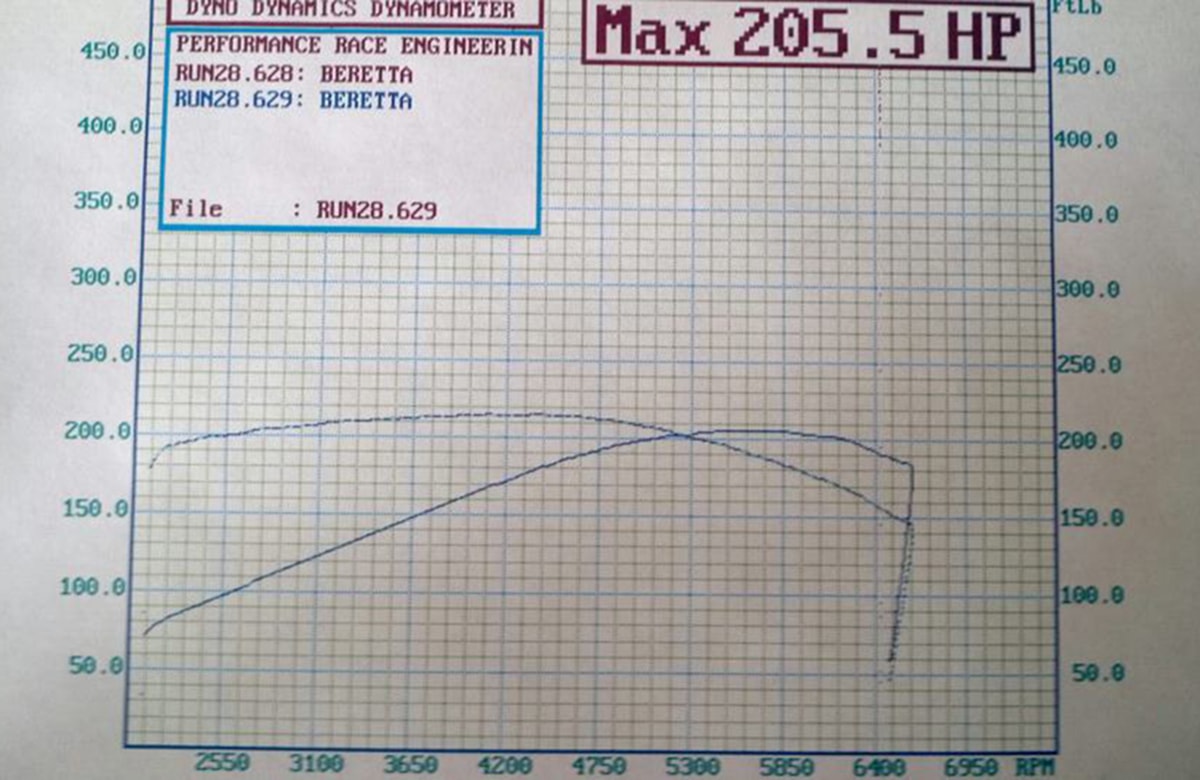 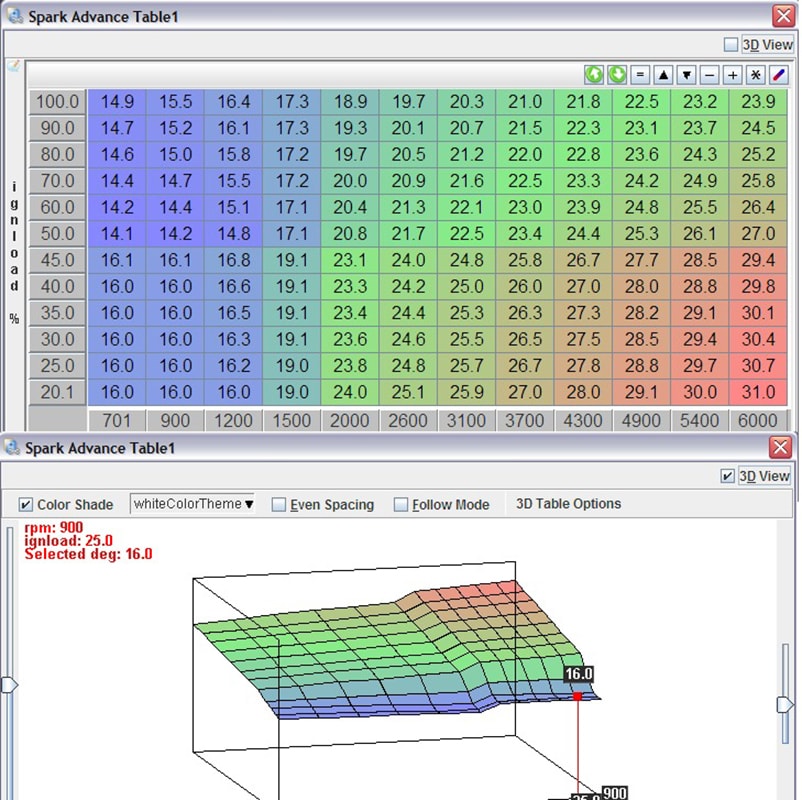 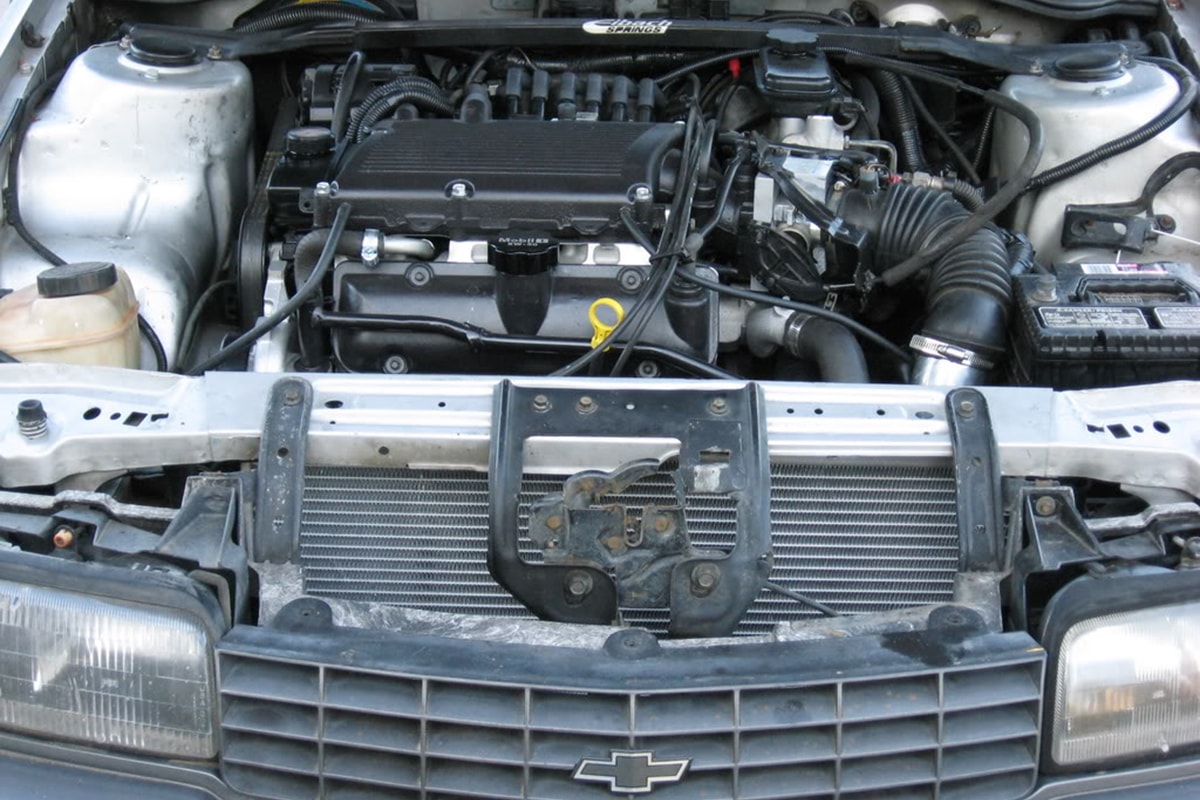 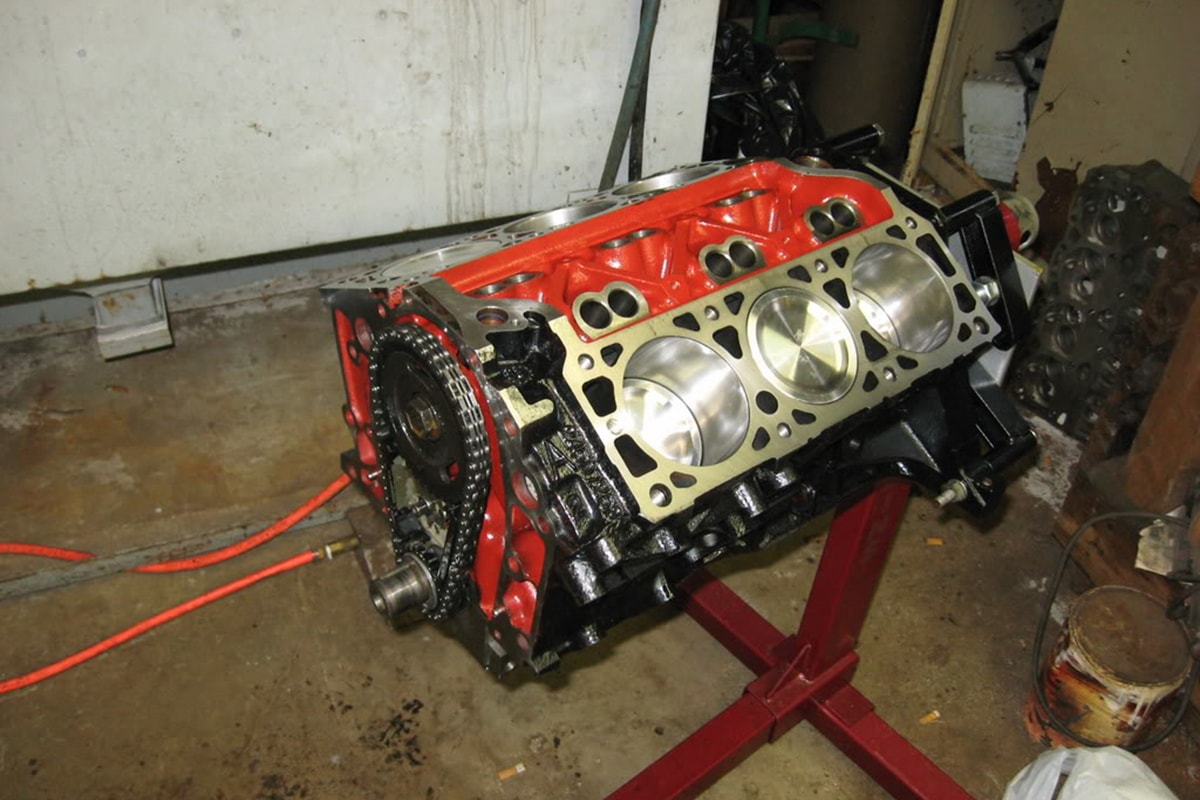 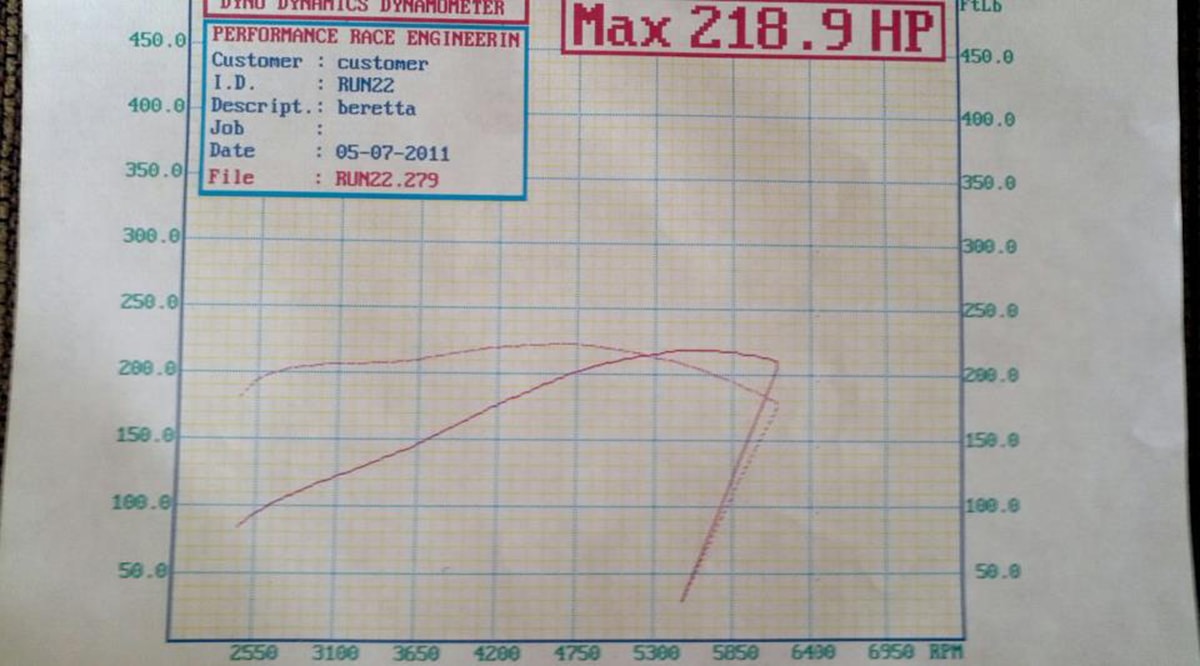 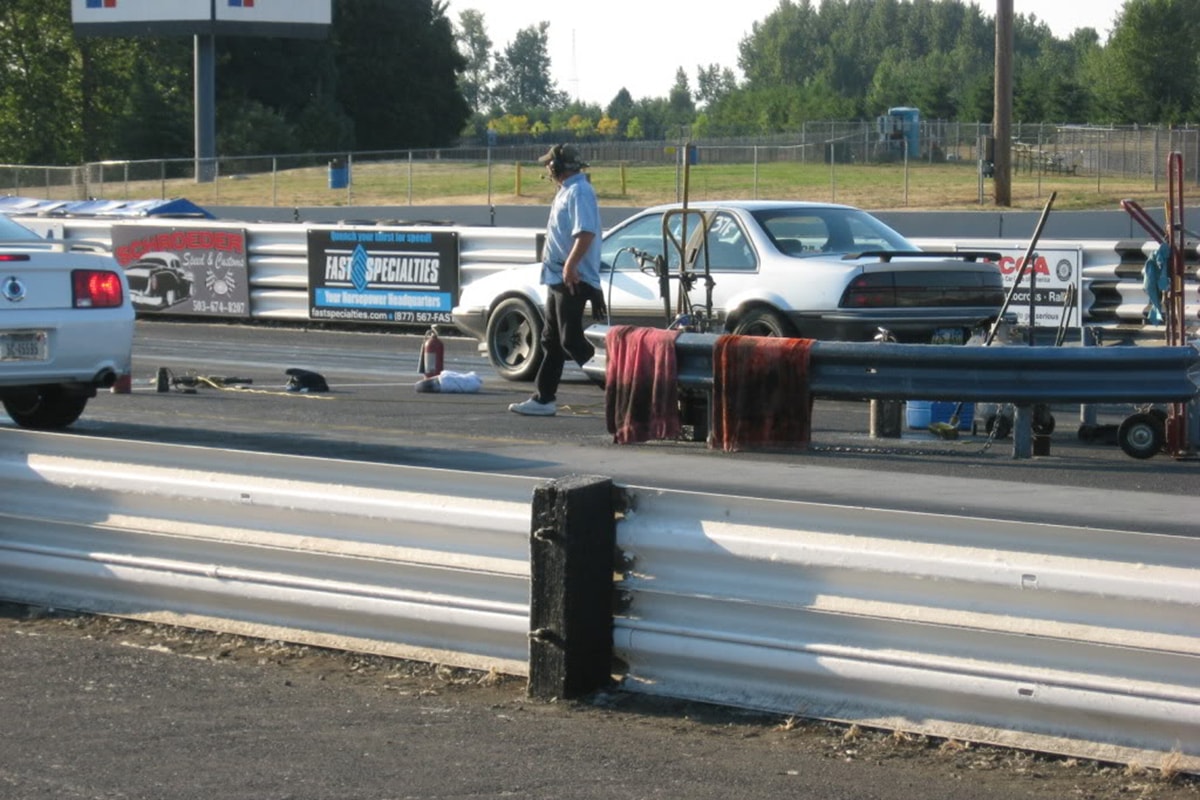 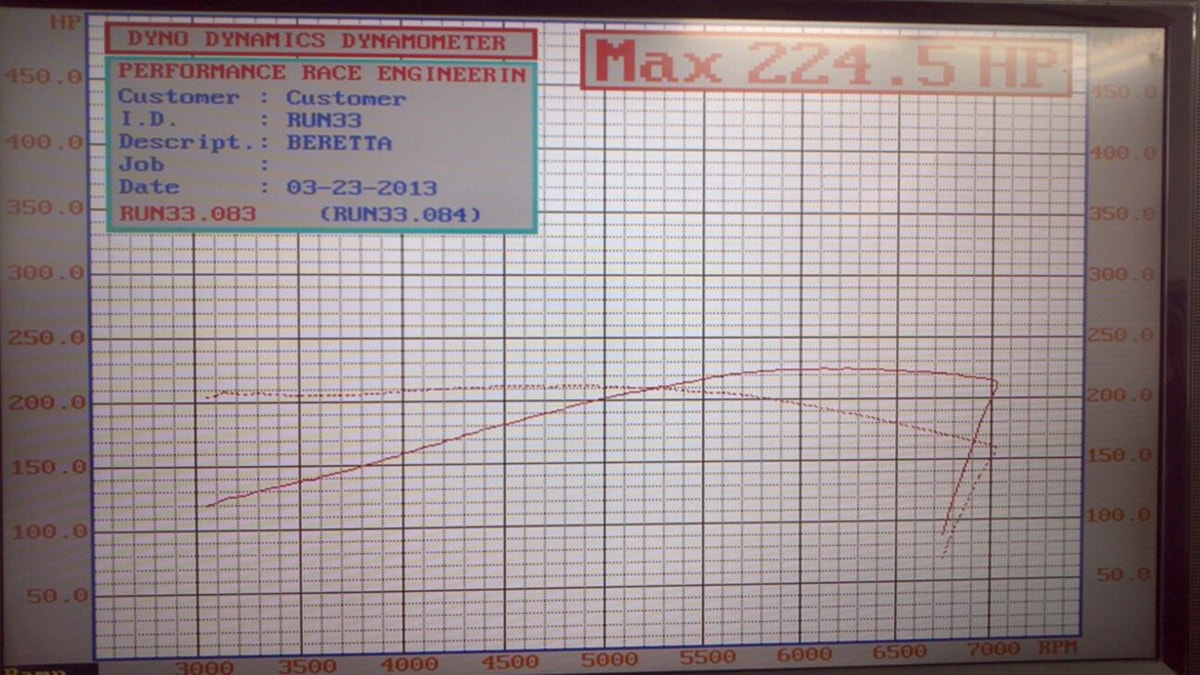 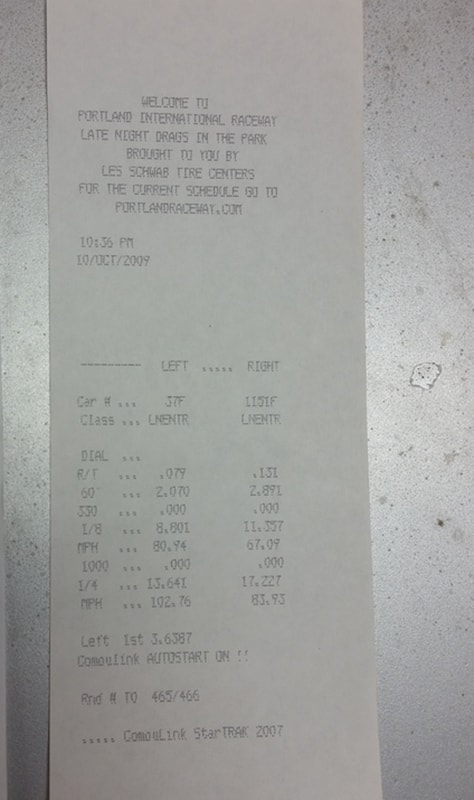 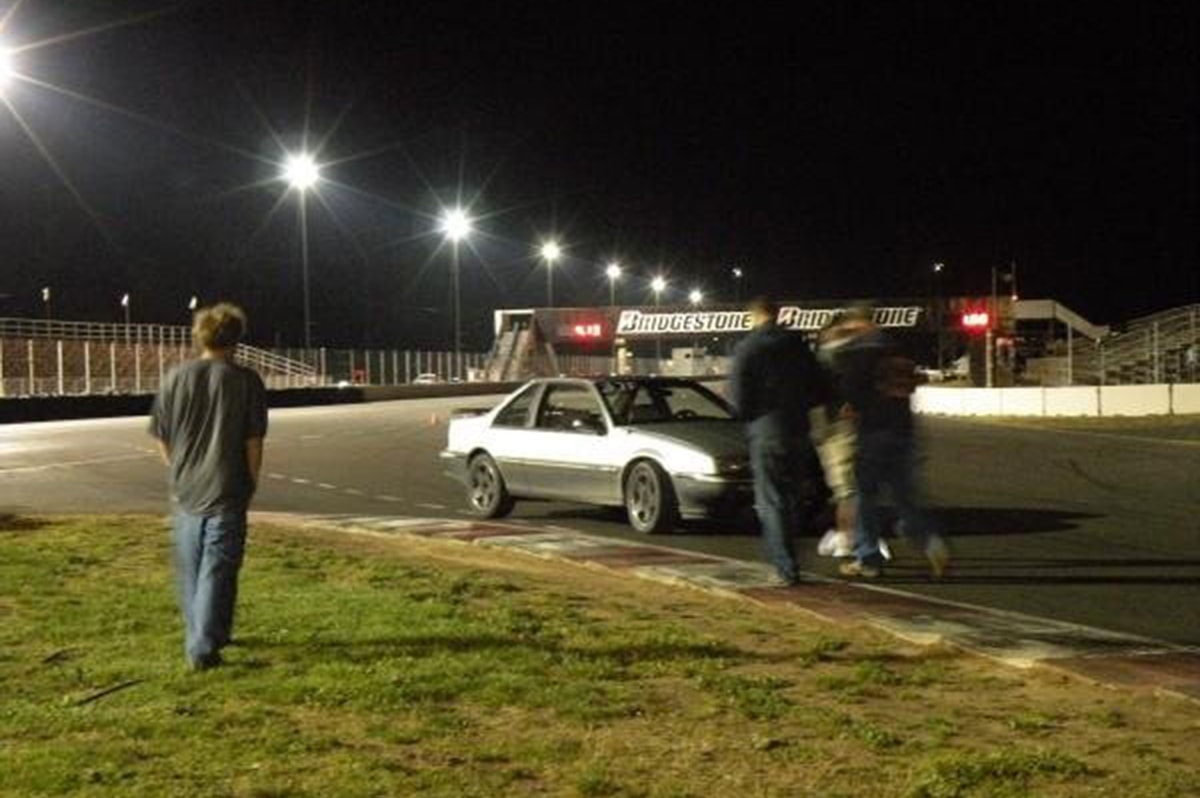 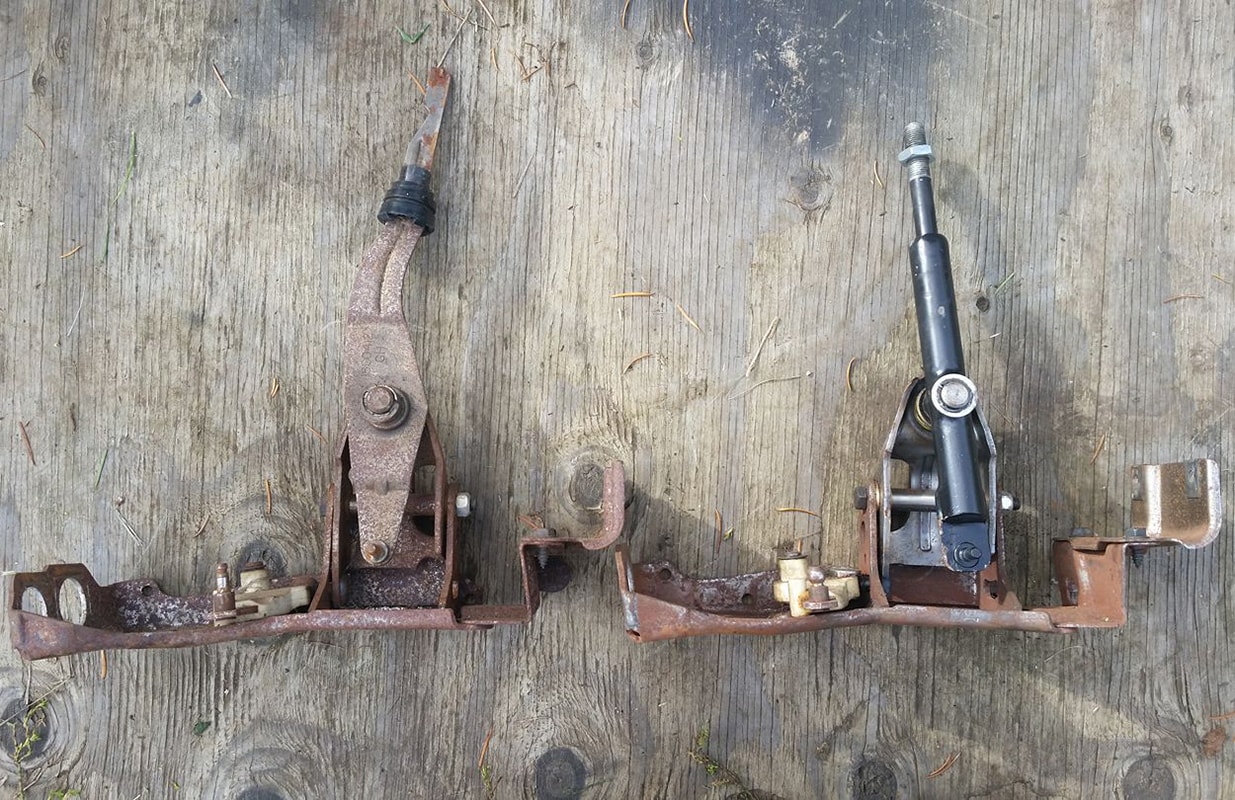 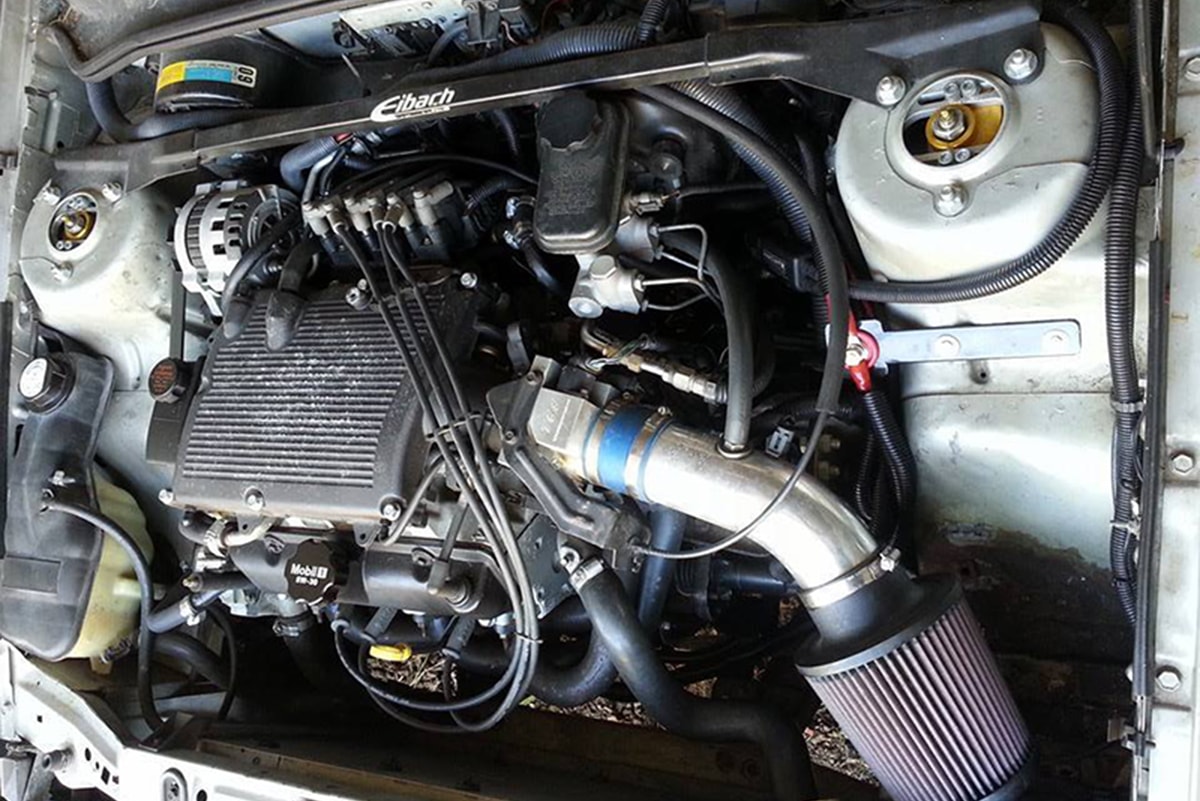 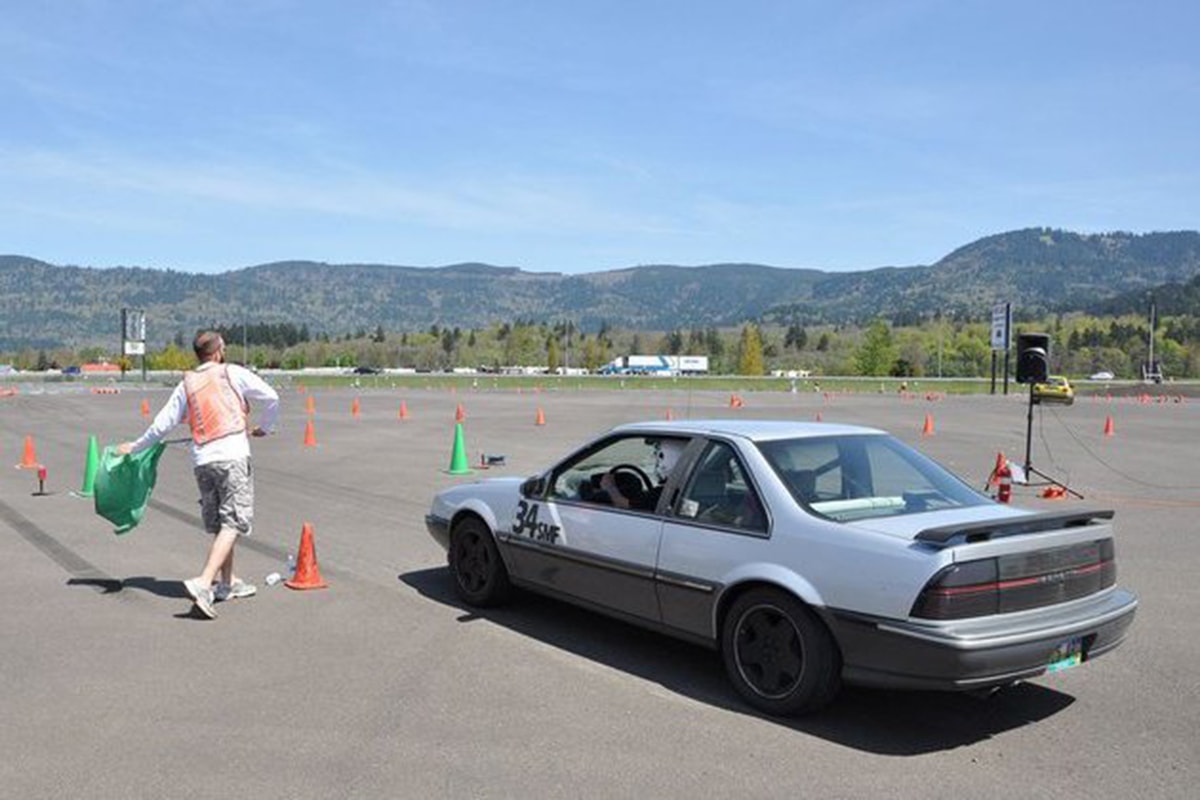 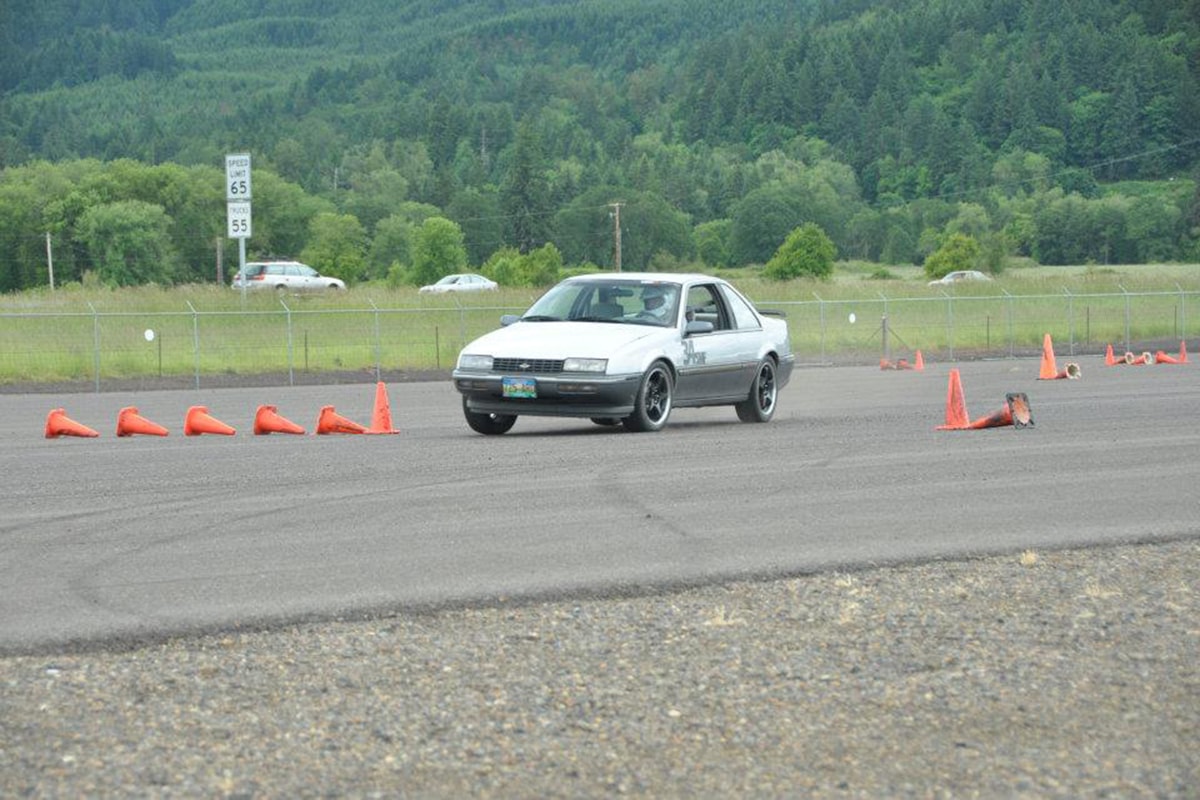 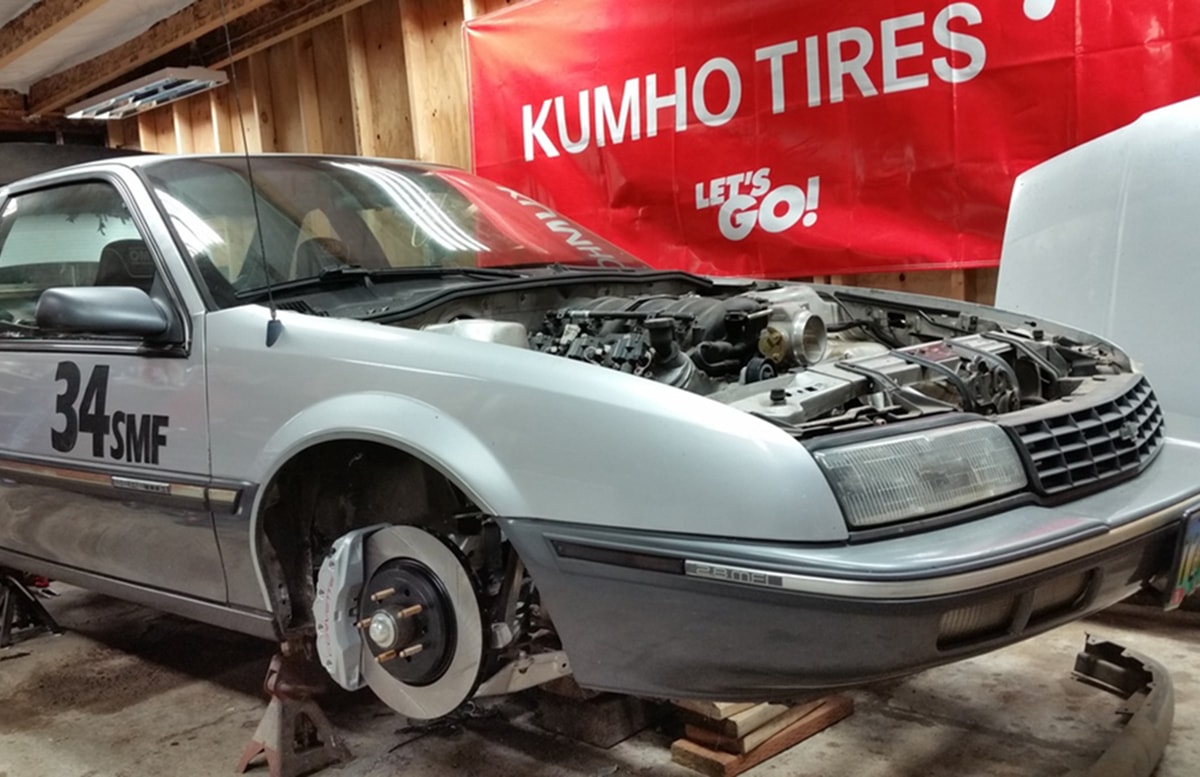 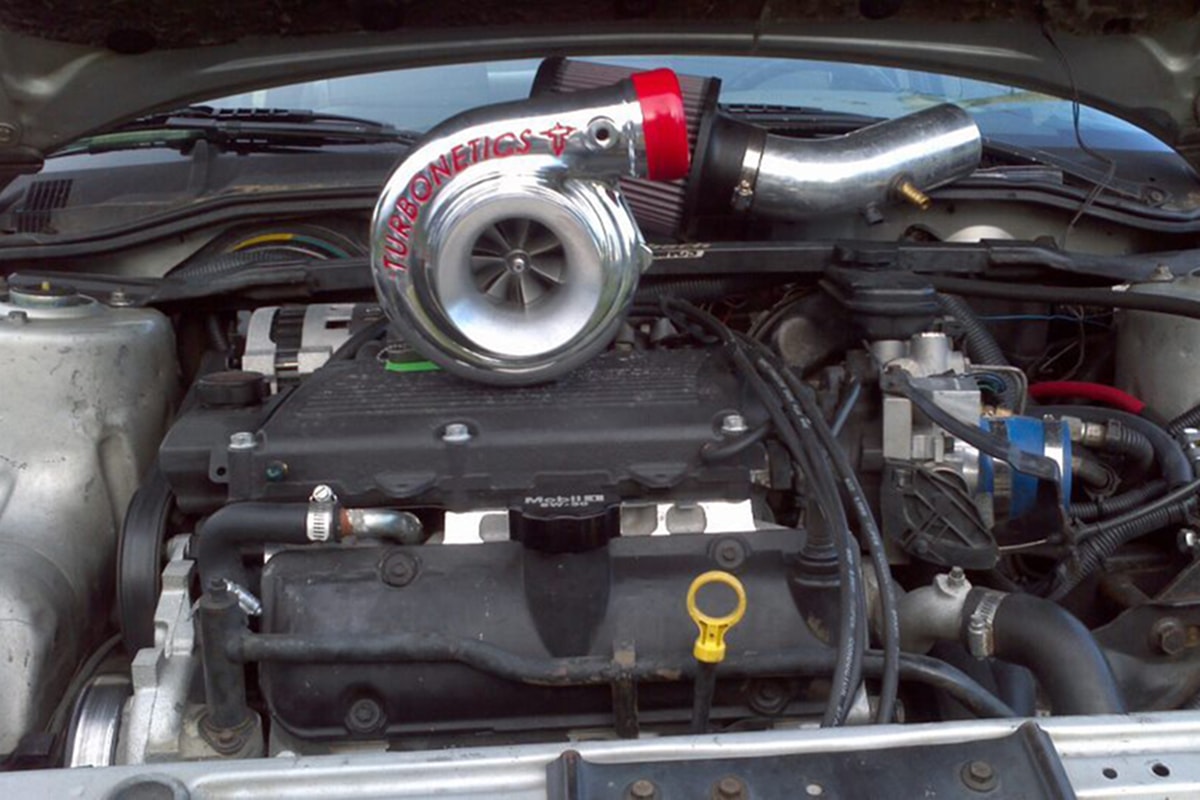 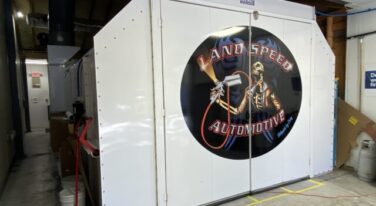 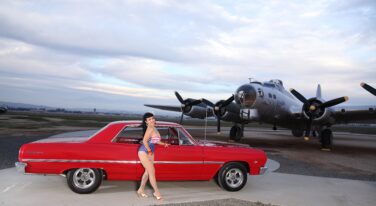 How interesting can a story about a Beretta be? They were never really popular cars, and besides, they’re front wheel drive. Alex Smith had similar thoughts back in 2005 when he bought his current Chevy Beretta. It’s listed as production year ‘88 CL, but is actually a model year ‘87 CL. He was conned into buying his first Beretta back in 2002 but over the years, the model/body style grew on him. The 87/88 he currently owns has become a very interesting test bed over the years and is the only example of its factory paint scheme that he’s seen.
When he was younger, Alex developed an overall love for everything automotive. This continued for a few years until he discovered the world of automotive speed. Alex thanks his mother especially for allowing him to take his automotive hobby to where it is today. He also tells us there are too many other people throughout his life to thank individually for his ability to have learned and achieved what he has.
Alex’s love for cars grew in two ways over the years: an overall love for cars and a love for automotive speed. He was “tricked” into buying his first Beretta, a 2002, during his senior year in high school. This led him on a quest to see how fast he could make his Beretta. The Beretta comes from the factory with a four-cylinder engine.
Alex’s quest for Beretta speed started with the stock 2.8-liter engine. He’d try something or other and then head out to the track to see what sort of a performance/ET gain he was rewarded with. This led to the installation of a 3.4-liter out of an Impala in this Beretta. This was followed by the race-prepping of another 3.4-liter engine as he tested the limits of the internally-stock 3.4-liter engine.
After acquiring his first Beretta, Alex went on a quest to learn how to make automotive speed. First came a degree in Automotive Refinishing. Next came a few years toiling at a street rod shop, doing mostly fiberglass work. For a while, Alex thought this was his dream job.

He learned most of it inside-out: building molds for fiberglass components to building molds for and laying up bodies for jet dragsters. Trailer frames and some one-off resto-mods followed. However, he realized that he actually made more bagging groceries and got burned out on the “working on some else’s car bug” after a couple years.

Alex was smart enough to document his quest for Beretta speed with certified ET slips.
Although he had a hand in building numerous awesome cars, he wasn’t making enough to finance his go fast habit. He bounced around a few different jobs over the next few years - grocery store bagger, tire distribution center expediter and driver, a few months refinishing fiberglass tubs and showers and finally work as a tire delivery driver. Then he made a 90/180 degree turn and entered an electrician’s apprenticeship program.
Alex turned his love and knowledge of cars into a pretty good side income - fixing the cars of friends, family and neighbors when he’s not working his electrician’s job. This gave him the income to begin his current project with the Beretta, which we’ll unveil in a bit.
Alex decided early on that his four-cylinder Beretta was going to get a six-cylinder engine when he could afford it. This meant that he didn’t really need to worry about not blowing the engine up as he developed his baselines and then determined what improvements each upgrade delivered.
Stock, his Beretta came with a V6 engine displacing 2.8 liters and developing about 130 HP at the crank. After adding a MagnaFlow 2.5-inch cat back exhaust system, he had a best pass of 16.734 @ 79 MPH. Eibach springs and KYB shocks and struts came next. After a few practice passes and the addition of a rear swaybar, his pass at 81.95 MPH brought his ET down to 16.417.
After about a year of playing with the car with the stock 2.8, he pulled the trigger on the 3.4 out of an Impala, followed quickly by another Impala’s 3.4 to build up while he played with the stock version. Other than a few wires here and there and the front motor mount, Alex tells me the engine swap was basically bolt-in.
The stock 3.4 Alex was running now was rated at 180 crank horsepower. Best time, with the suspension upgrades he’d already done, was 14.893 at 91.37 MPH. Numerous motor mounts and axles were blown with street tires during this phase of the car’s development. Shortly after posting the top speed mentioned above, the stock 3.4 began knocking and he was sidelined until he could finish the performance-built 3.4 he was building.
Alex went to the track right after installing the stock 3.4 he bought.
The engine was tested before all the work described below was finished. 205 HP was the result.

Chevy’s six cylinder engines back in this time frame were never meant to be performance engines; they were meant to be economy engines that delivered acceptable performance numbers. Alex decided to beat the hell out of the stock Impala engine he had while he built a high-performance 3.4 on the side.
To improve airflow through the engine and lower compression, he used the heads from a 2004 Malibu’s 3.5 engine. The upper and lower intake manifolds off the same Malibu were used to create better airflow into the engine. A 2005 Trailblazer was the unknowing donor of a set of 28-pound flow-balanced fuel injectors.
Head and combustion chamber work is where the largest gains are usually obtained, so a good amount of time and effort was expended here. To create better flow, the combustion chambers were all polished. Three angle valve jobs ensure that proper valve seals are obtained under the higher performance loads of the custom ground (205.2/205.4 @ .050 and 254.6/[email protected] .006 duration with a .533/.533 lift and 110 degree LSA) WOT-TECH cam and Comp Cams HP springs and valve locks.
GM’s family of six cylinder engines were never designed to power true strip burners. There are things you can do to the engines to make them deliver more power without having to delve into the innards, but there comes a point where the power you’re asking is too much for certain components to handle.

An example was the connecting rods. The improvements he was originally considering counted for a horsepower improvement of 40 horses, but the stock connecting rods would fail under that load. A metal treatment shop was found that performed a cryogenic strengthening process on the rods, and now they’ll easily handle up to 500 horses.
JE Pistons was the source for a set of 10.5:1 pistons. The block was paralleled and balanced. Airflow into the engine is controlled by a TCE 65 mm billet throttle body. Intake airflow already being maximized, a set of 99 Grand Am headers that were modified and ceramic-coated were installed to maximize exhaust flow. This new engine combo was rated at 218 horses on the dyno.
Alex wanted every bit of power and torque developed by the engine to end up driving the car, so he used a solid front motor mount to get rid of torque loss caused by the engine mounts. The MRZ polyurethane transmission mount busing gives great strength as well as resilience, allowing for maximum power transfer to the wheels.

Tech from the 80s just couldn’t take full advantage of the updated and improved parts Alex was installing. This meant that updated controls, including an Ostrich ECU emulator and an LC-1 Wideband O2 sensor from Innovate, were required.
The Beretta’s stock five speed manual couldn’t put the 218 horses the upgrades developed to the ground. This necessitated an upgrade to a Clutch Masters Stage 3 clutch. Blowing through stock axles with the few 2.8 upgrades he did convinced him that some 400 HP axles from The Drive Shaft Shop were in order. An Engineered Performance 3.73 Limited Slip Differential was the final arbiter of putting power to the ground in this configuration.
All this enabled Alex to put together a pass of 102 MPH and 13.641 while using Hoosier drag radials. That was his best official time to date with the 3.4 configuration. A Dyno Dynamics dyno said this configuration generated an impressive 218 horses.
Not being satisfied, Alex next installed an engine management unit from Megasquirt, the Megasquirt 2. This created a significant improvement in output, generating 224.5 horses at the wheels. Although the Megasquirt netted him more engine output, he was never able to turn that into an improved ET/Max Speed.
Alex had broken numerous shift cables as he was going through the steps above. He finally got tired off the constant cable replacements and designed a new shifter that ended the problem. His shifter modifications can be seen in the photo above.
You can build a motor that puts out 5000 horses and 4500 lbs-ft of torque, but the wrong suspension, like a basically stock Chevy Beretta suspension, can doom you to the ranks of “also rans.” Alex wants to be in the ranks of “Oh yeah, I remember him,” so he’s also made some significant changes to his Beretta’s suspension to take advantage of every foot-pound and horse his engine puts out.
First came a set of Eibach springs that transfer loads better than the stock units. Then came a set of KYB GR-2 Struts and Gas-A-Just shocks. Added rear stiffness was obtained by the installation of a custom rear shock tower brace. Next, after he’d discovered the joys of autocross, a Chevy Cavalier donated a strut tower brace to stiffen the Beretta’s front end.
Cornering control was enhanced by the addition of polyurethane bushings all around, including on the Addco one inch rear sway bar. Calipers and rotors from a 92-96 Beretta, equipped with Hawk HPS brake pads, keeps the more than 220 horses reined in. Alex kept seeing unusual rear tire wear, so after a while he became the only Beretta owner he knows of to make use of camber plates to correct inherent camber issues.
Alex basically followed the lead that others had set in each area - engine, transmission, suspension - to build the ideal ¼ mile Chevy Beretta. However, he decided to break new ground and go one step further in his quest for Beretta speed.

There’s a saying that you can find any information you want on the Internet. Alex is a smart guy, but the Internet can make anyone look like a genius. Alex proved this during his build to date. Online forums told him that certain Audis would make great donors for coilovers. Another forum thread gave him the dimensions to look up what struts worked on his car.
Alex shelved the idea of installing a turbo on the V6 engines. Who knows if it will resurface on a future iteration of his 87/88 Beretta CL?
Back to Post
About Mike Aguilar 388 Articles
Mike's love of cars began in the early 1970's when his father started taking him to his Chevron service station. He's done pretty much everything in the automotive aftermarket from gas station island attendant, parts counter, mechanic, and new and used sales. Mike also has experience in the amateur ranks of many of racing's sanctioning bodies.