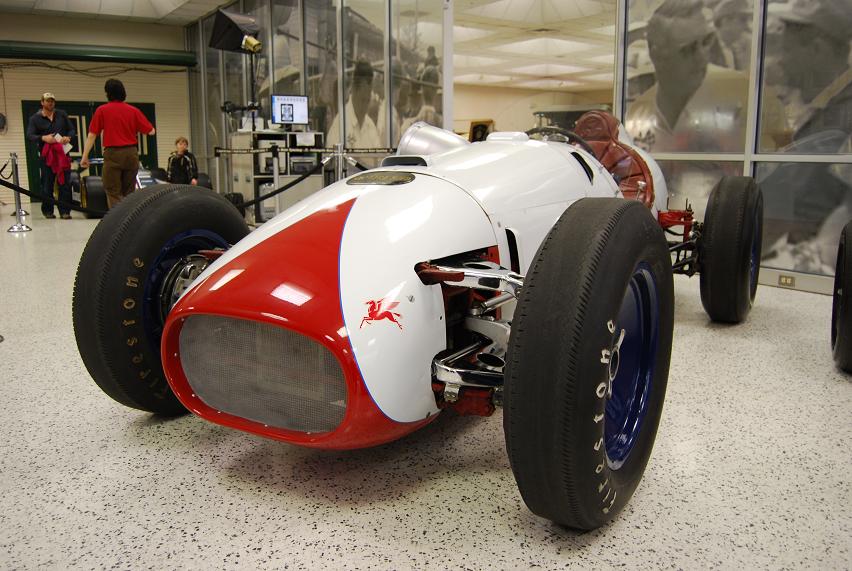 Our first visit to the Indianapolis Motor Speedway museum was in 1974, during our first trip across this country. We were driving a 1953 Pontiac sedan to the Pontiac club’s convention in Wichita, Kan. At that time the museum was located on the western corner of the Speedway’s property. That was four years before we got into automotive writing on a professional basis. The old museum opened in 1956 and originally housed six antique racing cars. The current museum—known as The Hall of Fame—opened in April 1976 and is home to over 75 vehicles including passenger cars, racers and motorcycles.

The Hall of Fame has always been a favorite. It is a beautiful building that is well lit, nicely decorated and usually filled with more visitors than a typical car museum. Today, it is not the largest or fanciest auto museum around, but it truly is a “hall of fame” filled with very significant vehicles including Indy 500 winners, authentic antique cars (particularly Indiana built makes) and fabulous treats like the Wasp that won the first 500.

We have written in the past about how Karl Kaiser, a reverent car enthusiast, created the unrivaled collection for the late Anton Hulman, Jr., who purchased the Indianapolis Motor Speedway in 1945. It was long before car collecting became the industry it is today and Kaiser was able to select and restore automobiles and motorcycles that represented important historical milestones. In addition, they had their picks of many famous racing cars.

Over the years, two of our personal friends—Jack Martin and Ralph Kramer—worked for the Speedway as directors of special events and the Hall of Fame. We got to know people like track photographer Ron McQueeney and “super docent” Jim Hogart. We attended car shows, swap meets, pace car introductions and one 500-mile race. We have made visits to see the pace car and racing cars stored in the basement. Following the 1983 Pontiac Fiero pace car ceremony, we dined with the Hulman family in Terre Haute, Ind.

In 2007, we had the pleasure of arranging publication of the Speedway’s 2011 centennial book with Dan Skiver, who today is Senior Manager of Event Operations. For a bit of deja vu, we drove another 1953 Pontiac to Indy to meet with Dan and Joi Chitwood and seal the book arrangements. It was in mid-May, just before the 500, and there were copper-colored Corvette Pace Cars driving all over the place. That was our last trip to Indy until this year.

We wondered what the Hall of Fame would be like after a seven-year hiatus.   We contacted Ellen Bireley, current Director of the Hall of Fame, and  she arranged for us to tour the museum during a break from the trade show activities. Tom Surber, who has been with the track’s public relations department for about seven years, guided us around. We even had a brief opportunity to renew acquaintances with racing historian Donald Davidson whose photographic memory has the history of the Indy 500 imbedded in it.

This is one car museum that doesn’t have less of an impact on a return visit. Most of us have experienced that sensation of going back to see a collection that bowled us over more the first time than on return visits. At the Hall of Fame, it’s just the opposite. You cannot absorb all the history in the place no matter how many times you visit. Every car on display and every piece of memorabilia in the showcases is worth a separate visit to the museum. Everything there has a story to tell.