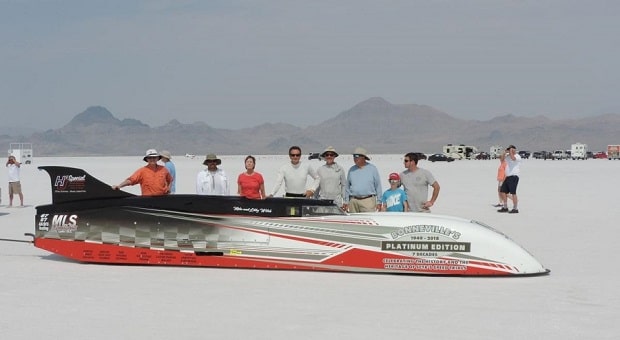 One of the most famous speedways in America is facing a questionable future. Utah’s Bonneville Salt Flats have been home to some of the most impressive speeds ever witnessed for more than a century, but the salt that has stretched for miles and miles for all these years is now at risk.

According to officials from the Utah Salt Flats Racing Association, the top layer of salt, which was once four feet thick, is now down to one inch in most places. Caused in part by mining companies which have been given access to separate out the salt from the potash, a fertilizer that is used for agricultural sources as well as industrial products such as soap, the Bureau of Land Management acknowledges a seven percent decrease of the crust package over the last decade and a half.

Due to this loss, the racing association said that they want $50 million dollars to replenish much of the lost salt that sits just a thousand feet from this racetrack.

“I don’t think that the general public realizes that this racing treasure is being taken away,” said Dennis Sullivan, president of the Utah Salt Flats Racing Association. “We blame the people that gave the leases and we think they were so poorly done that it took almost all the salt away.”

Although the mining company Intrepid Potash said that it is returning hundreds of thousands of tons of salt to this track each year, Sullivan says that it isn’t enough.

Scientist Brenda Bowen states that it is a combination of factors that has led to less salt on this famous track, and that combination definitely includes the mining. She also blames this loss on changes in environmental conditions and land use, including ongoing racing.

So, instead of going after millions of dollars, Bowen says that she recommends giving this track some rest.

“I would say leave it alone for a few years,” said Bowen. “Don’t come out here. Don’t drive on it when it’s wet; give it a minute and let’s see where it gets to. I mean, it’s not a racetrack in a warehouse. It’s not an indoor environment. It’s nature and it needs to replenish.”

Of course, this could be a problem if we all want history to continue to be made at the coolest land speed racing track in existence.

Stay tuned to RacingJunk.com as details continue to emerge about this ongoing story.