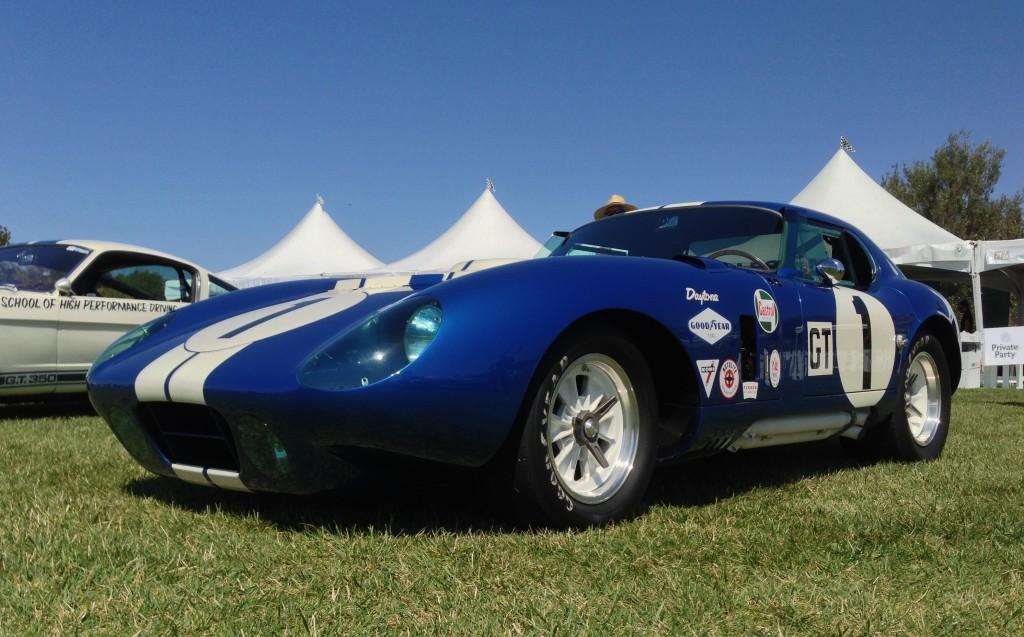 Every year, the sprawling coastline green of the Trump National Golf Course in Palo Verde puts away the tees and balls, and the smell of gasoline briefly mingles with the salty sea air as some of the rarest, most valuable and historically significant vehicles take the field for the annual Palo Verde Concours D’Elegance.

Truly the crème de la crème of the automotive scene,  the Palo Verde Concours D’Elegance offers a visual feast for  the automotive enthusiast set against one of the most beautiful backdrops anyone could ask for.  This year’s show, held on a beautiful, sunny day in Southern California with Catalina Island clearly visible in the distance, made it impossible to choose a “best in show.” That’s why we’ve narrowed it down to pick our five favorite Ford – and Ford-derived – cars of the show. 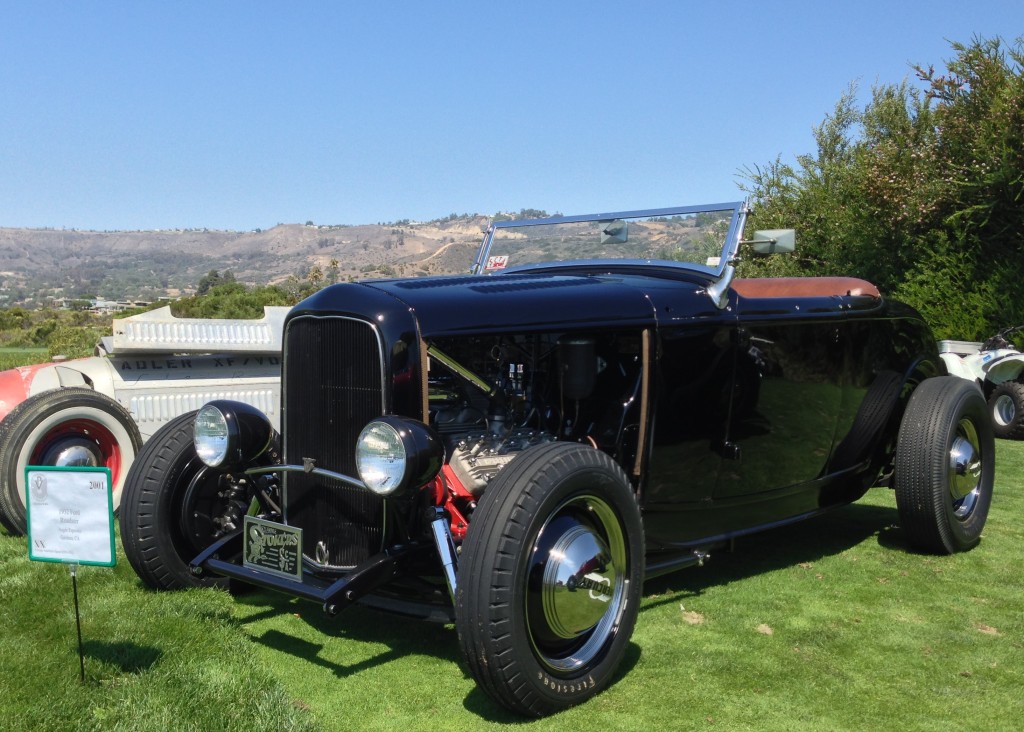 This black pearl really represents the birth – the first incarnation of automotive speed. It perfectly exemplifies the trends and style of the era, the sort of car guys coming back from World War II built when they got home. As is typical, the fenders are gone, the sides of the hood absent as well to not only let the engine breathe easier and run cooler, but also showed the world just what beastly motor you had under the hood. Wider wheels and tires from a Mercury of the era with smooth hubcaps add to the aggressive yet understated look – the car boasts its membership as a part of the Glendale Stockers, an early competitor in the SCTA – and you can bet this car is no stranger to the salt flats, too. 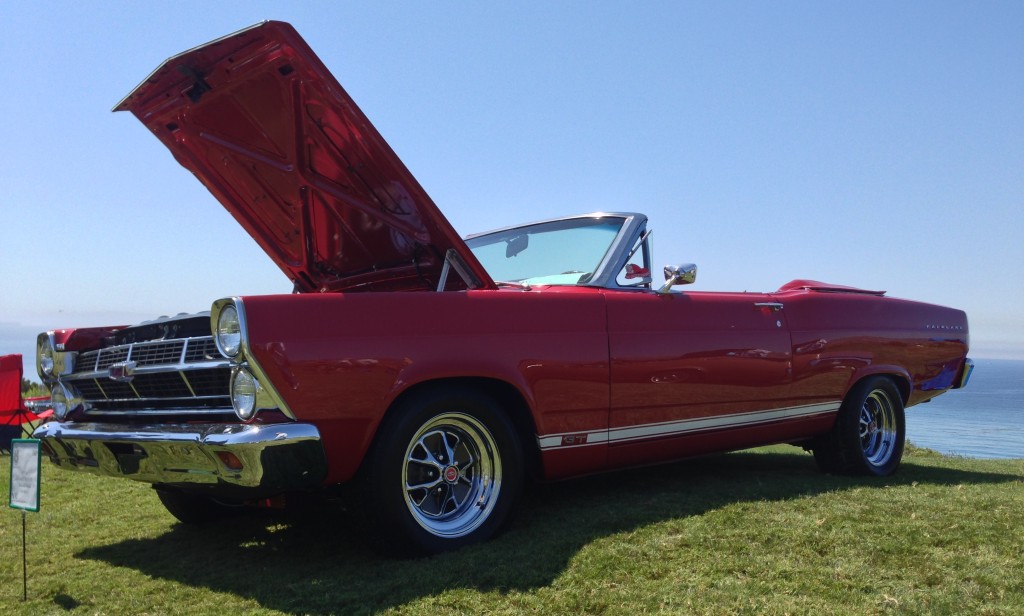 Revised for 1966, the Fairlane was looking more like the “Musclecar” we define it as today – and looked less like the Falcon and Ranchero it shared the platform with. This particular example has the smaller 390 cube, four-barrel carbureted mill good for 320hp (while the R-code hardtops built for NHRA/IHRA Super Stock got a 427ci V8 good for between 410 and 425hp). Never the less, this convertible is one ride that’s perfect for cruising Pacific Coast Highway or Main Street USA, it is one handsome drop top. 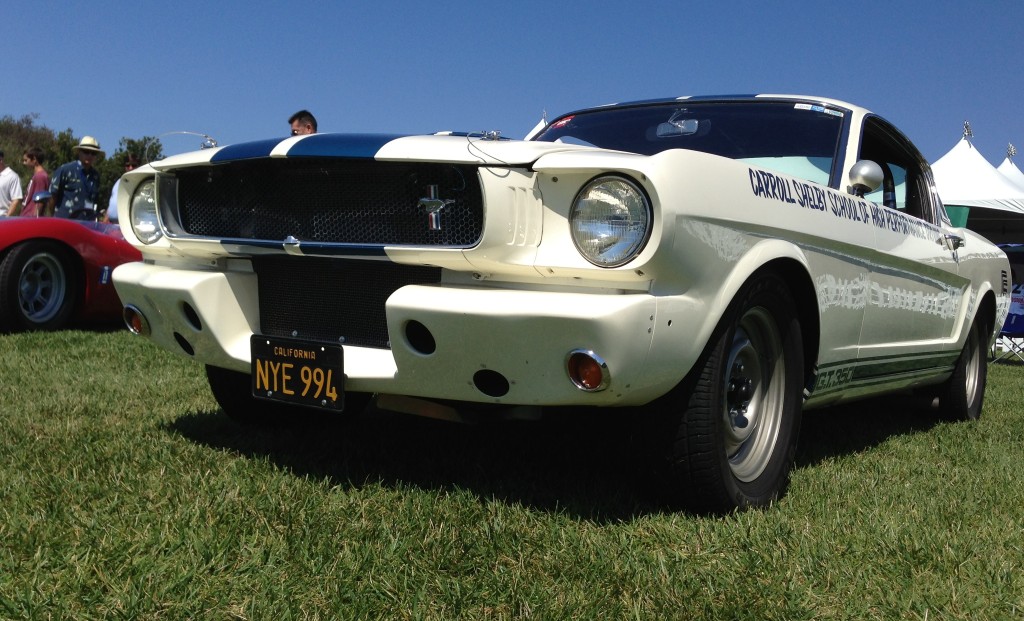 Back in 1965, Ol’ Carroll Shelby rang up Ford Motor Co and asked for a couple of “Secretary’s Mustangs” he planned to convert for use at a Racing School he wanted to run out at Riverside Raceway (scene of the epic SCCA Trans-Am battles between the Mustang Boss 302, Camaro Z/28 and ‘Cuda AAR). Carroll modified the 289ci V8 for a good 306hp with a “Cobra Hi-Riser” intake manifold, a Galaxie rear end, bigger metal-lined rear drums and Kelsey-Hayes front discs. This car is one of those three original cars that Carroll modified and actually used at the Carroll Shelby School of Performance Driving (now Bondurant Racing School), the course taught and developed by none other than Pete Brock. This is car #2 of 3 used at the racing school, and as such it’s a great piece of history. 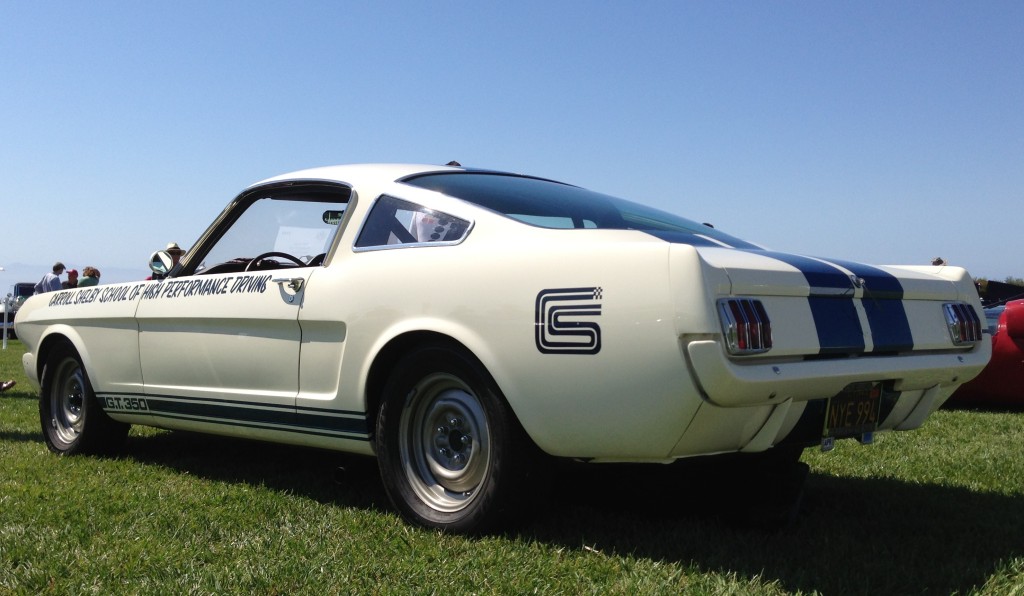 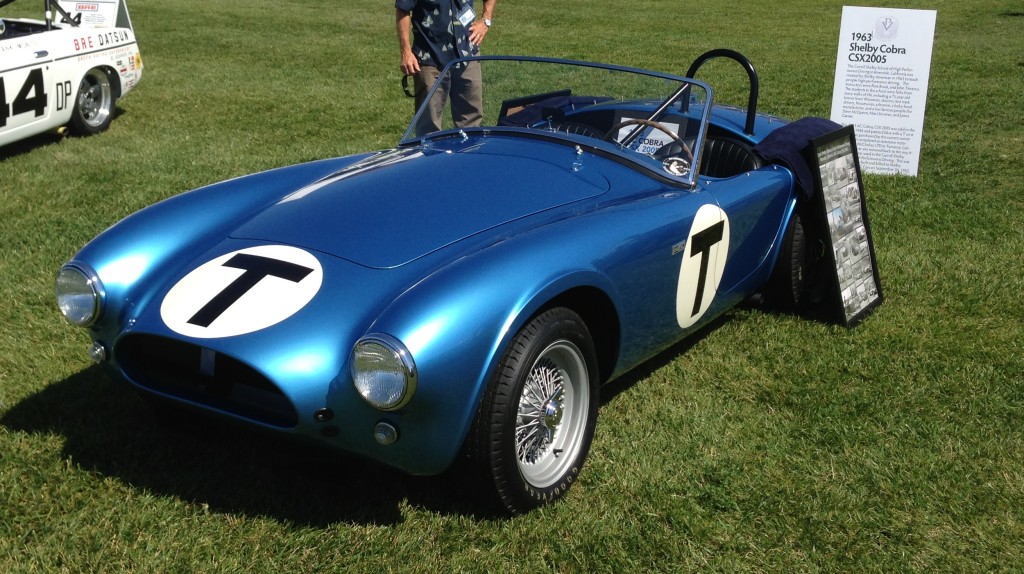 The trainer Cobra. This car was used at the same Carroll Shelby School of Performance Driving as well, featuring the a worked over 289 mill like many other Shelby Creations. This car served to get many famous racing drivers and celebrities familiar with the unique driving style required to pilot a Cobra (to be honest, the Cobra nearly invented “drifting” as a means of going fast thanks to its tailhappy nature), including the likes of Steve McQueen. This is one of the earlier examples of the Cobra, and a great look at what an unmolested original really looks like as opposed to the seemingly innumerate replicars and restomods of today. 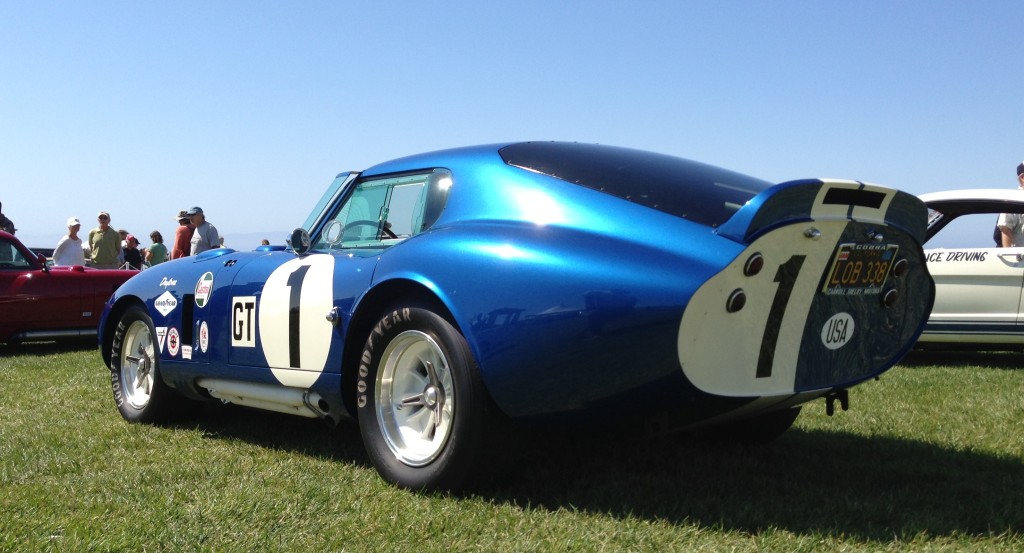 The Daytona Coupe. At the time, it was considered terribly ugly (what were they thinking?) – this car was the result of “What if we made a fastback, aerodynamic Cobra?”. How that question came about is another story altogether. Shelby had returned from Europe wanting to beat Enzo Ferrari at his own game – with his own car. The problem was that the Cobra’s open top design meant it ran about 30mph slower down the Mulsanne straight at LeMans, meaning that in that 3-mile long drag race, the Cobra would lose racing against the streamlined Ferrari 250 GTO. Shelby again tapped Pete Brock. Brock drew out the design of the Shelby workshop in Venice, the proceeded to remove the bodywork from a Cobra and put the steering, seats and everything else where he thought it ‘should’ be. Brock then hand-beat out the The car was streamlined and given enclosed headlights and a sleek fastback tail. At a time when few understood aerodynamics and what was happening to the cars at high speed, it was a huge leap forward and drastically increased the speeds the Cobra could achieve. On its first run out, the car ran 186mph (whereas the Cobra topped out at just 157), and after another 30 days of testing and development, cracked 190 at Riverside Raceway. The Daytona first raced at the Carrozeria Gransport in Modena, but went on to win the 24 Hours of LeMans, 12 Hours of Sebring, Daytona Continental 24 Hours and 1965 FIA GT World Championship. At the time, there is no way that Pete Brock could have known the significance of the car he’d designed on the floor of the workshop or the influence it would have on design in the decades to come. 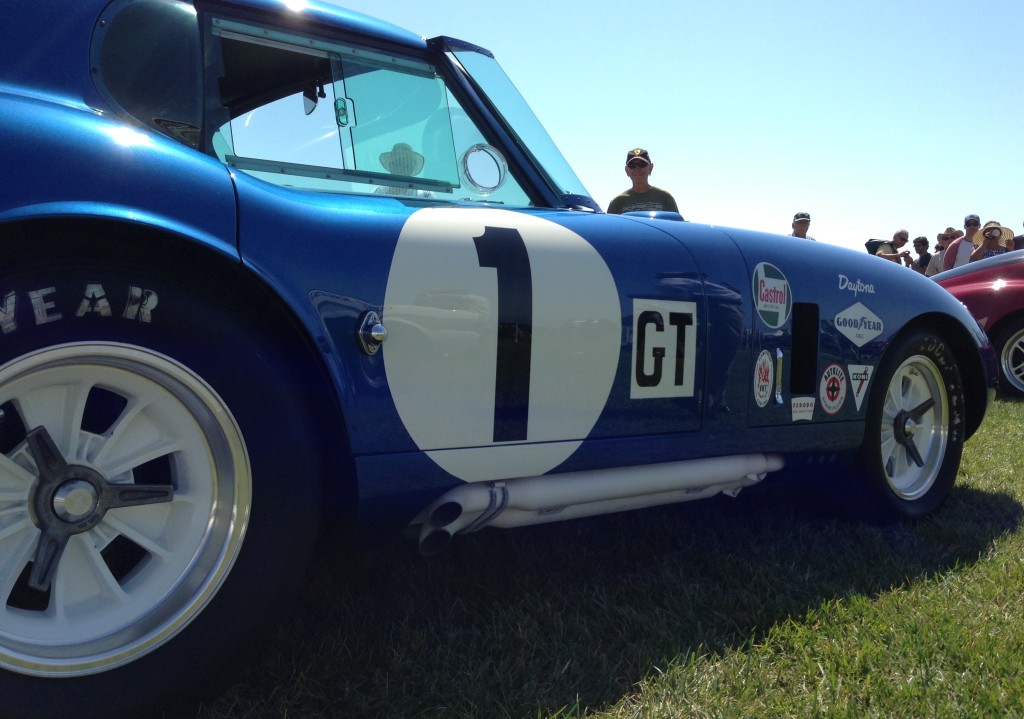 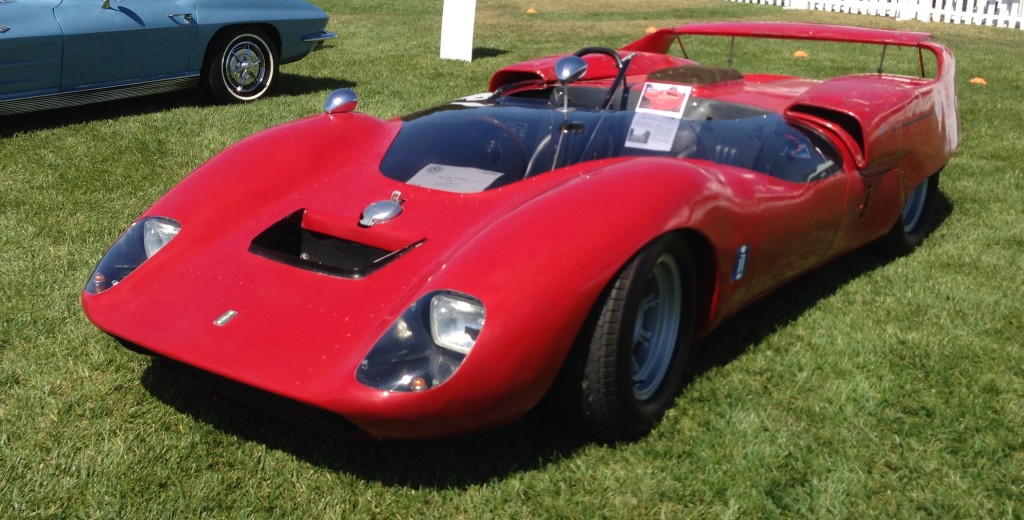 You’ll notice that this car is very “rough.”  It’s in its original, unrestored state. This car was run hard and put away wet, offering an interesting look at the reality of vehicle development and an up-close look at how these cars really were. In 1964, Carroll Shelby asked Pete Brock to put a different body on the second Shelby-built Lang Cooper sports racer. Brock’s design featured an adjustable rear spoiler integrated directly into the body of the car – a feature that would make it into production on the Ferrari F40 some two decades later. Brock’s design was then sent to Italian Coachbuilder Fantuzzi while DeTomaso designed the chassis and intended to develop a 7-liter Ford small block V8 for racing. Mid engined, topless and packing a 7 liter Ford V8 breathing through eight velocity stacks, this slippery car looks like it would’ve been a force to reckon with on the track, and you can see some early inspirations of later racing cars. However, Carroll became involved with the Ford GT project and ultimately decided not to go forward with the P70 – and didn’t pay for the P70. Understandibly, DeTomaso was pretty peeved, and so he dismantled the car, where it sat on the factory shelves until 2004, when it was purchased and reassembled, reaching completion in 2007, seeing the light of day for the first time in four decades. As such, the car bears the scars of having been dismantled in anger. You can almost feel Alessandro DeTomaso’s seething rage in the rough bodywork, imagining him cursing up a storm as the car was torn apart for storage. While the P70 never saw action, if Carroll had gone forward with it rather than the GT40, racing history might be very different today – either way, with scars and all, it’s undeniably beautiful.